Eating Tuna is Hurting People, Too — Here’s How to Fix it 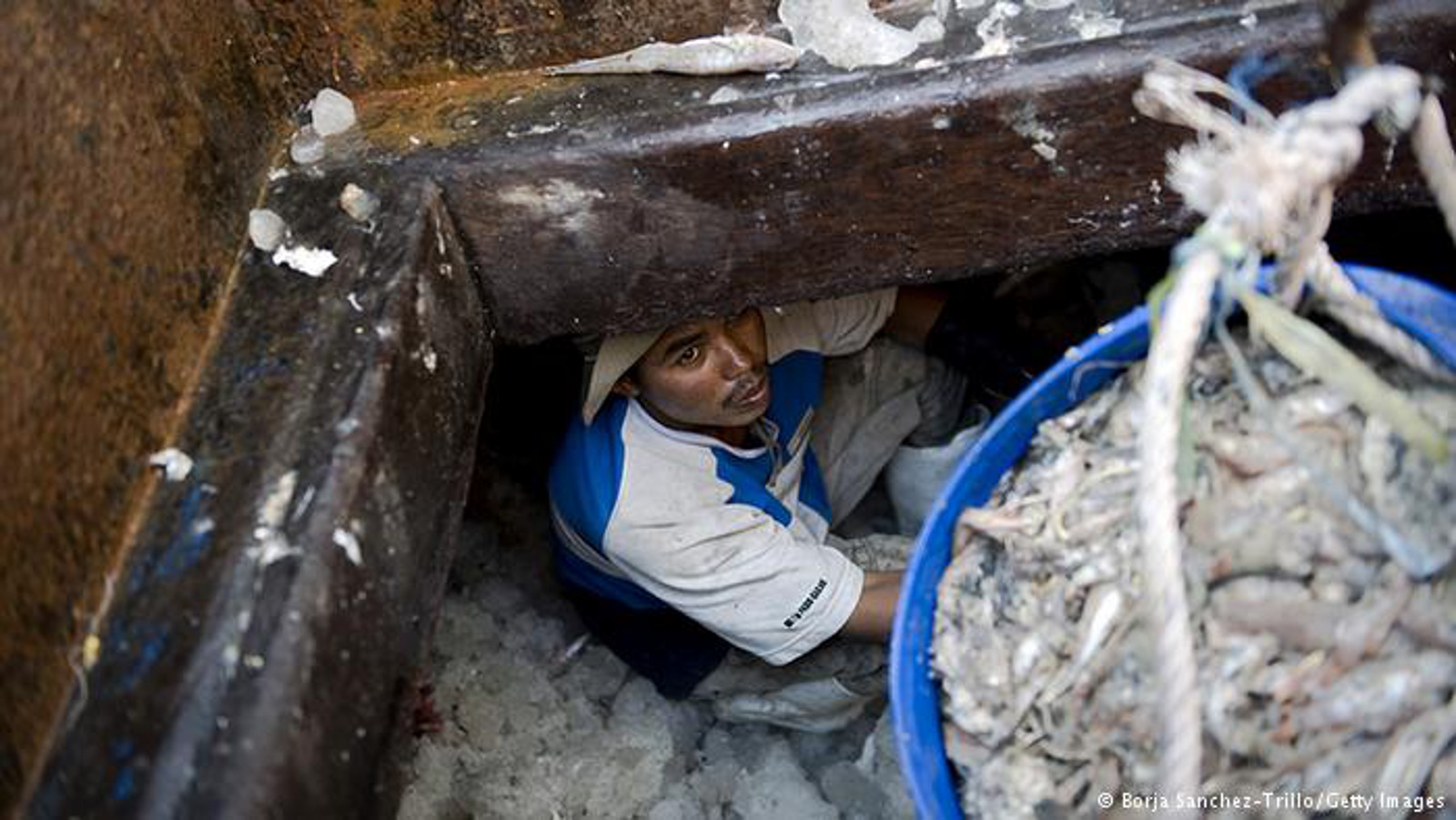 As it turns out, the fishing industry harms humans too. The same practices that see profit margins favored over environmental interests involve rampant human rights abuses of workers on fishing boats. Reports of slave labor in the seafood industry have been surfacing for several years, revealing human trafficking, forced labor, violence, and even murder.

With Thailand being the second largest exporter of cheap seafood — mainly shrimp, tuna and sardine — to the U.S. and the Environmental Justice Foundation (EJF) estimating that over 90 percent of workers on Thai fishing boats are illegal migrant workers from Cambodia and Myanmar, most of which have been trafficked and are treated as slave labor, eating fish in the United States — or anywhere for that matter — is a global social justice issue. 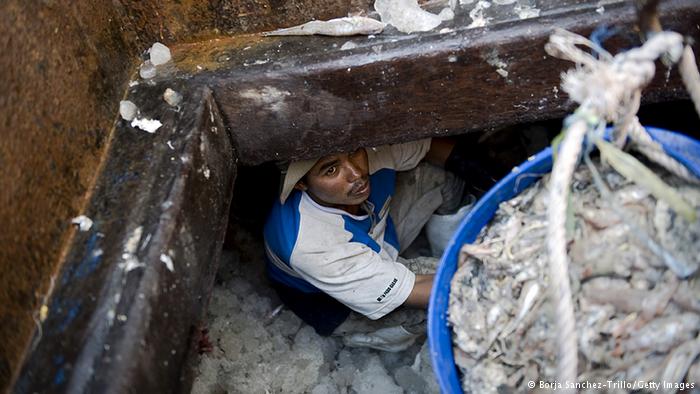 Last month, trade unions led by Greenpeace urged the world’s largest producer of canned tuna Thai Union Group and its largest U.S. buyer Chicken of the Sea to increase transparency and better regulate the treatment of workers by their suppliers.

This came after a number of recent investigations revealed the filthy and abusive conditions fishing vessel crews endured for months, often years. These men, often destitute migrants desperate for work, were lured onto ships and forcefully kept there for up to three years, driven to work 20-hour days for no money and subjected to frequent physical abuse. According to the United Nations, beatings and even killings — used as scare tactics to enforce compliance — are common, with about 60 percent of human trafficking victims having witnessed a murder by their boat captain.

An investigation led by the Associated Press in September which resulted in over 2,000 fishermen being rescued from Indonesian boats, tracked the fish caught by workers enduring such conditions to the supply chains of trademark U.S. companies such as Wal-Mart, Sysco, and Kroger.

A New York Times series reports that “tens of thousands of workers, many of them children, are enslaved on boats every year” with between “2,000 and 6,000 seamen” dying annually, often under suspicious circumstances never pursued by justice. It also traced the forage fish shipped by Thai Union all the way to American supermarket shelves — where it takes the form of seafood-based cat and dog food — and even to the factory farm industry where it is fed in powdered form to livestock.

Clearly, this is not an isolated social justice issue. In fact, Greenpeace calls for the “false divide between social and environmental justice” to be closed. EJF’s executive director Steve Trent states that “producers and consumers of Thai seafood are embroiled in one of the most outrageous social and ecological crimes of the 21st Century.” Indeed, commercial fishing involves wrongdoings that stretch from irreparable ocean depletion to severe human rights violations and manifest on the other end of the supply chain as pet food cans, seafood, and even meat produce.

Although these reports of rampant human rights abuse are shocking to say the least, they are not entirely surprising given the generally unscrupulous nature of the seafood industry.

The same unchecked focus on financial profits driving criminal labor practices also allows unrestrained environmental damage. This ranges from overfishing, which depletes fish populations and puts many species at risk of extinction, to deep sea trawling that rakes the seabed to catch fish — destroying thousand-year-old corals in the process — and often captures untargeted animals. Known as “bycatch,” countless dolphins, whales, porpoises, turtles, and sharks are unintentionally caught by fishermen and then tossed back overboard, dead or dying. 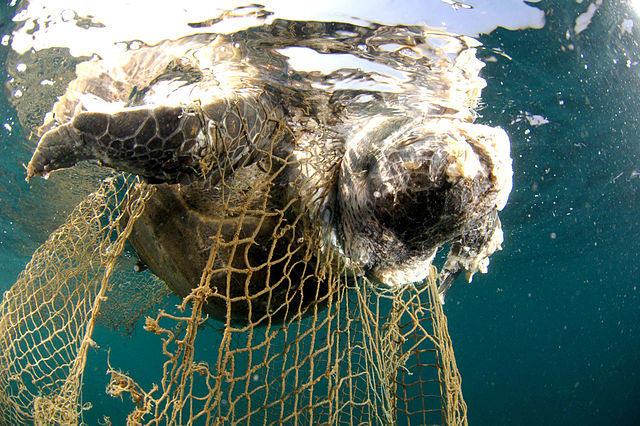 According to WWF, bycatch comprises 40 percent of fish caught worldwide and for every one pound of targeted fish sold for consumption there is an estimated 20 pounds of non-target bykill.

This equates to around 1,000 dolphins, whales, and porpoises needlessly killed per day — or over 300,000 per year — as well as 250,000 sea turtles accidentally injured or killed by fishermen in this way annually. One report showed that a particular U.S. fishery caught and discarded 400,000 sharks per year — or 66 percent of the total fish it captured. 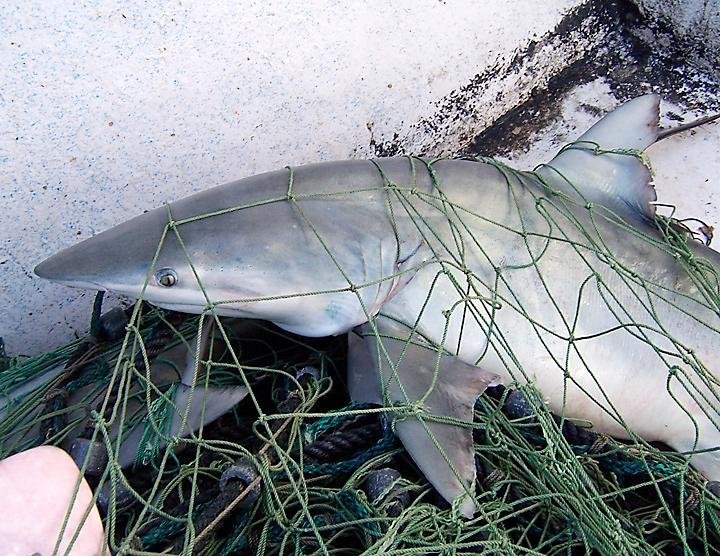 In the tuna industry, dolphins are the main victims of trawling bycatch because of cohabitation between tuna and dolphin populations, but tuna fishing has also been linked to the incredibly cruel practice of shark finning.

Clearly, our seas’ vast resources are no match for human greed. In fact, the oceans are literally running out of fish, with researchers from Johns Hopkins estimating that our unbridled appetite for fish might leave oceans empty by 2050 and the WWF reporting that the number of marine animals has halved in the last 45 years.

The most efficient thing you can do is to simply stop funding this cruel industry. The easiest way to put an end to the rampant abuse of fishing boat workers is to stop buying and consuming the fruit of their labor — in this case, the fish. Because of simple supply and demand economics, the way to stop fishing is to stop eating fish. And in case you were wondering, so-called “sustainable fishing practices” are no better.

Most people aren’t aware that their tuna fish sandwich comes with a side of dolphin, shark and turtle, not to mention severe human rights violations. You can spread awareness of the fishing industry’s terrible toll on the oceans, marine survival, and human life and urge people to stop supporting it with their dollars.

Thankfully, there are many tasty alternatives to fish. Finally, by ditching seafood you’d be personally responsible for saving 225 fish and 151 shellfish per year, alongside not participating in the rampant abuse of fishermen. What better incentives to forgo fish?