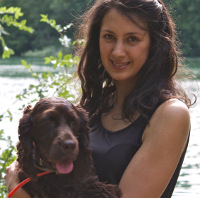 Anissa is a French-Indian freelance writer and animal advocate with a Journalism Masters from the University of Sydney. Currently based in Paris, she has also lived in India, Spain, the UK, the US and Australia. She became vegan four years ago after interning for PETA in Los Angeles where she worked on media campaigns, protested the circus and sampled vegan treats. When she isn’t writing about animal shelters, badgers or polar bears, Anissa enjoys eating vegan crêpes and spooking hunters while walking her dogs in the local forest.