Thinking of Swimming With Dolphins This Summer? Here’s What You Need to Know 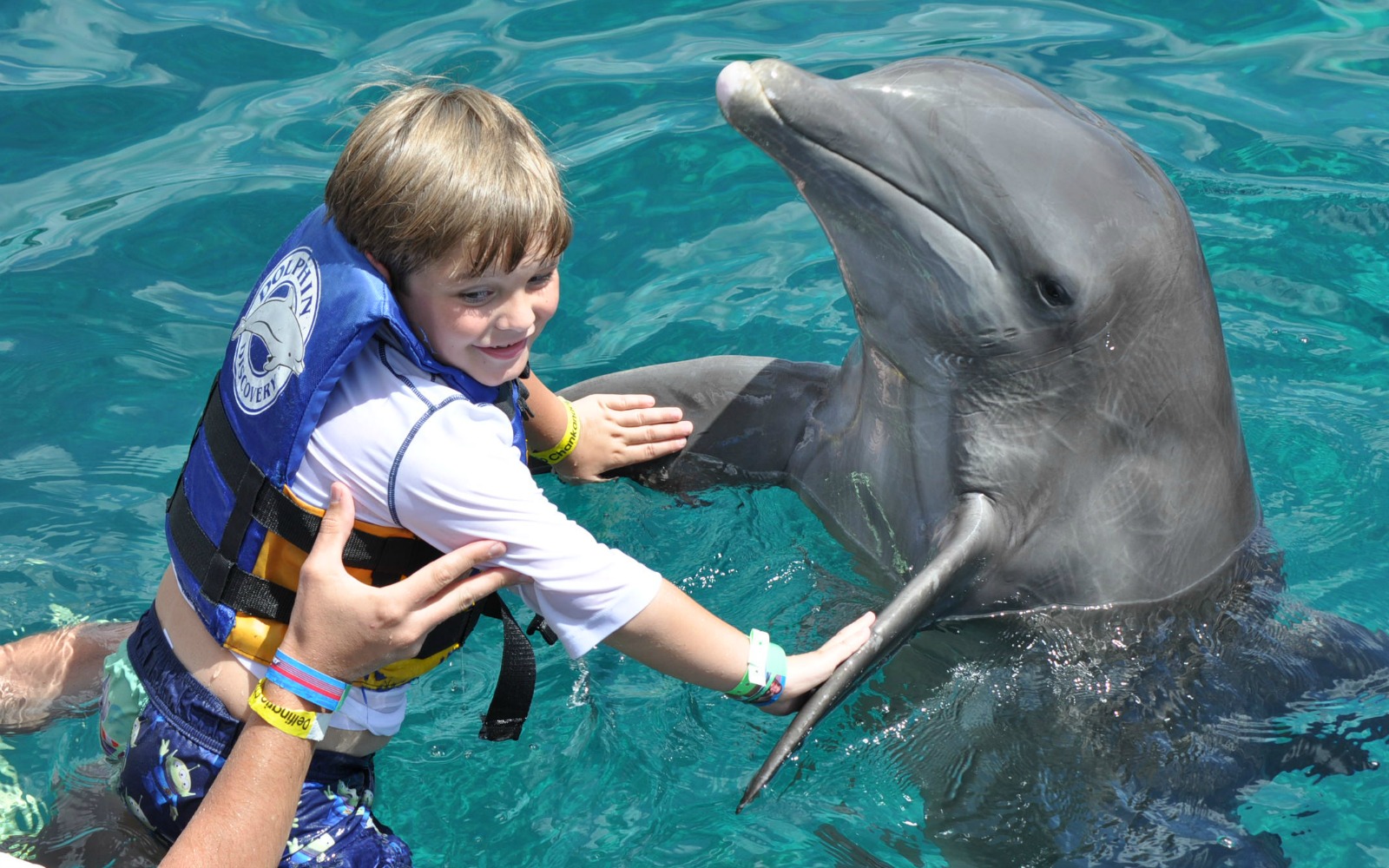 Dolphins are among the most complex and intelligent species on the planet. They are self-aware and can recognize themselves in a mirror and notice changes in their appearance. And just like us, they have deep social and emotional bonds with their pod members. Studies have also shown that dolphins have personalized whistles for members in the pod, similar to how humans give each other names.

Unfortunately, due to their impressive learning abilities, dolphins are often exploited by humans for use in entertainment at aquariums, marine parks like SeaWorld, Miami Seaquarium, Marineland of Canada, and Loro Parque.  While the award-winning 2013 documentary Blackfish shattered the wholesome image of marine parks being fun, family-friendly destinations, swim-with-dolphin tourist attractions are still on the rise.

As with any attraction where animals are used to turn a profit, swim-with-dolphins attractions have a dark side. Swim-with-the-dolphins programs (SWTD) can be found nearly everywhere around the world. From SeaWorld to resorts in the Caribbean, these programs are boasted as once-in-a-lifetime opportunities where you can have a one-on-one encounter with dolphins.

For a pretty penny you can spend the afternoon with dolphins, but what is the price that the animals have to pay? What is the difference between the programs at SeaWorld compared to open space dolphin swim programs? If you’re thinking of including a swim with dolphins activity in your summer vacation, please read this article first and reconsider.

Although these tourist attractions slightly vary from one to the next, the fate of these incredible animals is the same. These dolphins are either born in cramped tanks in captivity or brutally kidnapped from the wild, like in the infamous bloodbath known as the Taiji dolphin hunt in Japan. These greed-fueled hunts are violent and deadly for many dolphins, and those who survive are often captured, separated from their tight-knit family pod, and sold to aquariums, marine parks such as SeaWorld, zoos, and other facilities all around the world.

In 2015, SeaWorld Orlando finally ended feeding as part of their Dolphin Cove exhibit. While visitors can no longer pay to feed dolphins frozen fish, they can still purchase packages that allow them to touch the dolphins and take photos with them under a trainer’s supervision. There have been a few incidents of children being bitten while petting or feeding the dolphins, so the end of Orlando’s feeding program might help prevent these issues. But it’s the treatment of the dolphins that are the real problem.

These holding tanks are a tiny fraction of the space these animals enjoy in the wild, so dolphins and other marine animals become understandably bored and frustrated by this stale life. When sentenced to a life in captivity, dolphins will sometimes exhibit stereotypical behaviors such as swimming in circles repetitively and lying motionless on the surface or floor of their tanks for long periods. In some heartbreaking instances, dolphins have chosen to stop breathing and end their own lives.

As you can imagine, the dolphins are often sick. According to a World Animal Protection/Humane Society of the United States report called “The Case Against Marine Mammals in Captivity,” cetaceans in captivity are routinely given antibiotics and ulcer medications and require vitamin supplements because they are being fed nutrient-deficient frozen fish and have a history of premature death from a variety of causes. When touched, animals can be exposed to foreign bacteria or pathogens that can make them very sick. Putting already ill animals in close contact with the public can put both people and animals at risk – not exactly the ideal vacation plan, huh?

Simply put, SeaWorld should not allow the public to interact with marine wildlife. Interactive programs, according to PETA, are intrusive and stressful and can force animals to involuntarily harm themselves or visitors.

For instance, the Island of the Bahamas website states, “On the ride out, watch the dolphins jump and play in the boat’s wake. Enter the water, about 20-25 ft depth, and swim with them alongside you in the crystal clear water. Perform behaviors with the dolphins and ask them to turn around, speak, splash you or wave.”

Sounds great! Instead of patronizing SeaWorld, a company notorious for its rampant animal welfare violations, you can instead experience dolphins exactly where they should be: in the ocean. But don’t be so quick to book your trip. Wild dolphins wouldn’t naturally swim with people or give them kisses.

So how do the open ocean programs get the dolphins to interact with people? Sadly, more often than not, the dolphins are kept in a pen and are intentionally kept hungry and then will follow the boat to the ocean after being unlocked from their pen. While many unsuspecting tourists think that the dolphins are swimming with them because they want to, in reality, it’s because they are starved.

As the Ric O’Berry Dolphin Project notes, it’s hard to predict what a wild animal will do when placed in unnatural conditions. As a result, “there are hundreds of documented cases of injuries from participants, including reports that humans have been rammed or bitten by dolphins during their interactions.”

According to PETA, captive dolphins in the United States might have some minimal protections, programs that are outside of the United States are often governed by few, if any, laws. The dolphins are kept in small pools or polluted sea pens, with debris and trash left in or near the pools. Plastic bags, sunglasses, or paper used to wrap the “fish food” can all be ingested by the dolphins, causing gastrointestinal problems or even death, PETA explains.

Even programs that allow people to interact with marine animals in the “wild” can disrupt normal feeding and resting patterns and force the animals to relocate, causing severe psychological distress. Plus, nobody wants to be forced to see – or be touched by – that many people all the time.

When it comes to Dolphin Assisted Therapy, or DAT, there are a lot of factors to consider more than just being around a dolphin for the first time. When families come to these programs, they are usually traveling. It could also be part of their vacation. Either way, this is a special trip; one you get excited for. The person there for the “healing” is in a completely new environment, which could elicit excitement, nervousness, confusion, or another emotion that could change their behavior. These conditions are usually not considered when the clients are experiencing DAT. 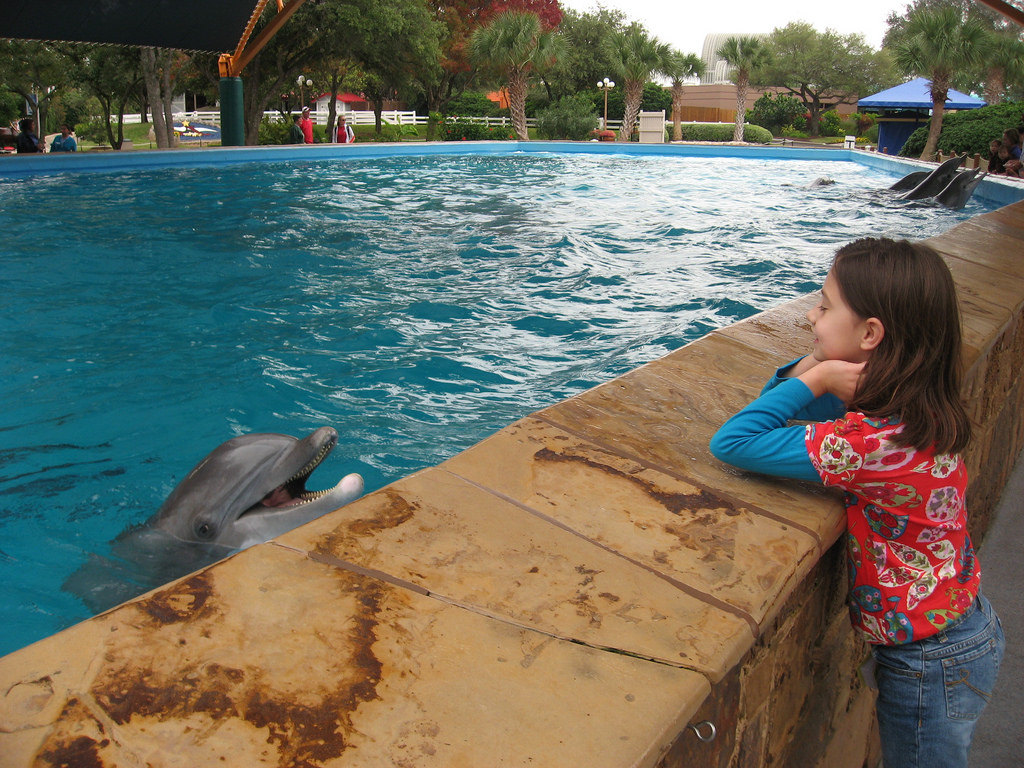 Lori Marino, PhD. is the science director of the Nonhuman Rights Project, founder and executive director of The Kimmela Center for Animal Advocacy, Inc., Senior Lecturer in Neuroscience and Behavioral Biology, and a Faculty Affiliate of the Center for Ethics at Emory University. In 2013, she published an essay on Aeon called “Dolphins are not healers.” The essay is based on years of dolphin research. In it, she debunks the myth that dolphins can heal the ill. She acknowledges that dolphins, like any wild animal, can be aggressive and a danger to humans, using an example of a girl who had her hand bitten by a dolphin at Sea World, Orlando. Since Marino’s essay was published, there have been more bites.

Susan Casey, the author of Voices in the Ocean: A Journey into the Wild and Haunting World of Dolphins, echoes the same sentiment in an interview with NPR, “…you pay $5,000 or some extraordinary amount of money and they get into a swimming pool with a dolphin and somehow they’re going to be fixed, and that is not supported by science at all. It’s, of course, a novel experience, their a charismatic animal, and it’s something that would be fun to do under any circumstance, but this idea of putting more dolphins into concrete tanks and charging astronomical fees and promising something that is really not being delivered, it really is kind of shameful.”

If Not Fun, What Are You Supporting?

By participating in DAT, or even going to amusement parks and zoos that feature dolphin shows, you are not only supporting cruelty in the form of captivity but the cruelty involved in the wild-caught dolphin trade.

While many people may try to argue that keeping dolphins and other cetaceans captive benefits them due to so-called conservation efforts, keeping them confined to a tank is harming them. From, depression, aggression, poor dental health, self-mutilation, vomiting, suicide attempts, drugs, and illnesses, our need to use dolphins for our paltry entertainment is killing them. According to a research study conducted in 1995 by Robert Small and Douglas Demaster, the annual mortality rate for captive dolphins was two and a half times higher than that of wild cetaceans.

Not only are the dolphins unable to experience a life intended for them, but they also contract foreign diseases while locked away in tanks. For instance, dolphins in the Mirage Hotel in Las Vegas have suffered from a contagious disease called pox, caused by stress and poor general health according to the National Institute of Health. Is the suffering of these amazing animals worth it?

What to Do Instead

SWTD regulations have been suspended in the United States, according to the Ric O’Berry Dolphin Project, leaving these facilities to oversee and govern their programs to their likening. The dolphins are often worked constantly all day, without a chance to take a break from the constant tourists touching them and taking photos.

There are currently over 800 bottlenose dolphins in captivity all over the world that need our help. Costa Rica, Chile, and Croatia have all banned keeping cetaceans in captivity and it’s time all countries put an end to what has become unnecessary harm.

You can make a real difference to a lot of dolphins around the world, stuck in tiny, chlorinated tanks by standing up against marine parks and other captive animal attractions. Here’s how: