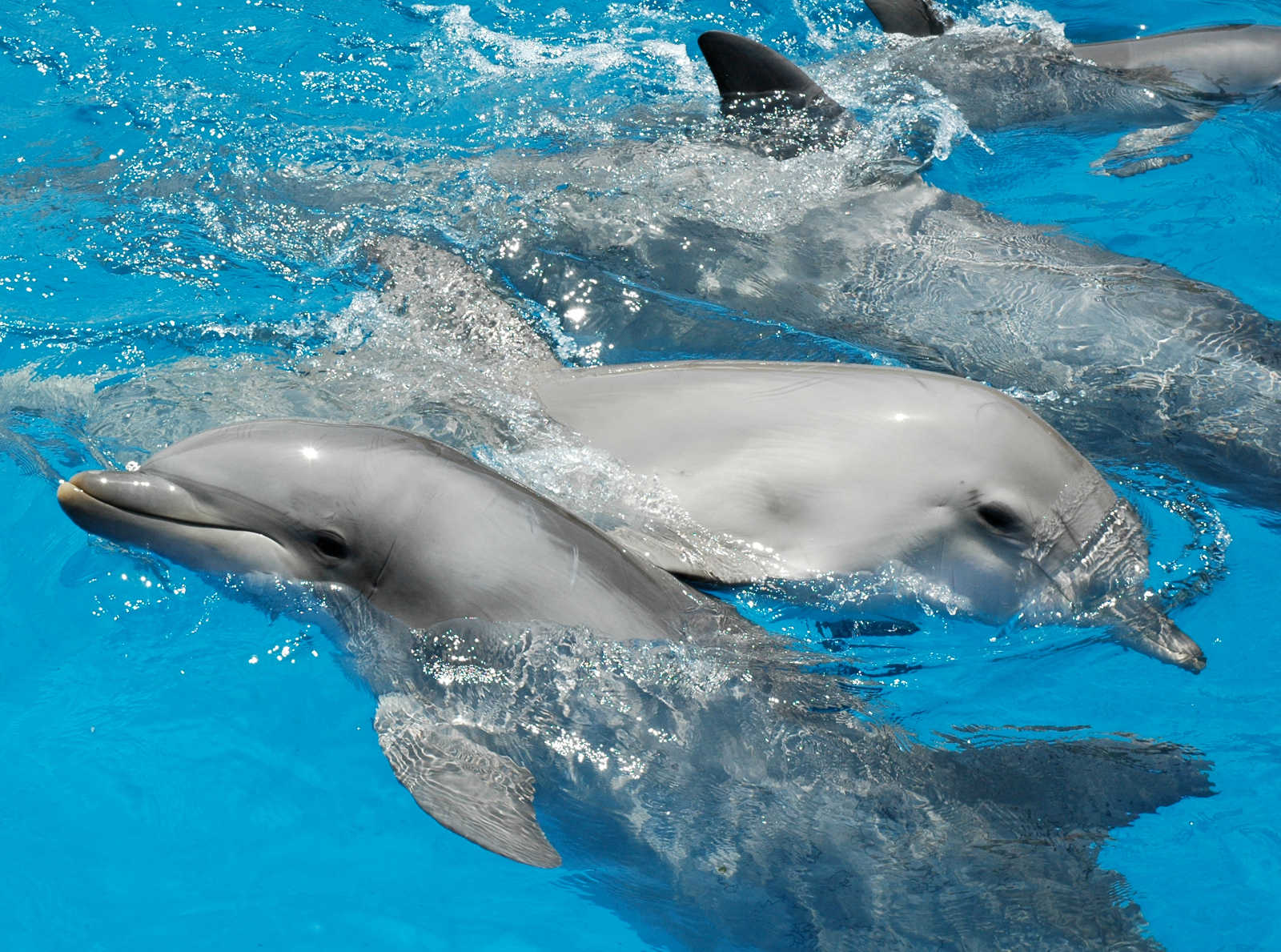 The horrors of the Taiji dolphin slaughter continue unabated, largely fueled by the demand for wild-caught dolphins from a growing number of marine amusement parks and swim-with-the-dolphins programs in Russia, China, Latin America, and the Caribbean.

Marine conservation group Sea Shepherd says, in its explanation of the links between the Taiji dolphin hunt and the dolphin captivity industry: “Some dolphin trainers who, in public, appear to love their dolphins, in reality work with the Taiji fishermen, showing the same level of cruelty and lack of care for the dolphins … The trainers particularly look for young female dolphins, those which frequently have unweaned calves with them. While the mothers are often chosen for a life in captivity, the babies will eventually be slaughtered with the remaining dolphins.”

There are many reasons why these animals do NOT belong in captivity. Here are just few:

The brainpower of the dolphin species has long been renowned. As an example, take a look at the work of Louis Herman, of the University of Hawaii, who carried out a 34-year study of dolphin cognition at the Kewalo Basin Marine Mammal Laboratory in Honolulu, Hawaii. He found that short- and long-term memory retention, concept learning, and self-awareness were well developed within these animals.

Speaking of a dolphin’s capacity for recognition of its own recent behavior, as well as that of the humans around them, he says, “This suite of findings attest to the remarkable flexibility and extensibility of dolphin cognition and reveals cognitive competencies that surely aid the dolphin’s effective functioning within its complex social and ecological milieu.”

Little wonder then, that marine researchers, conservationists, and animal-rights activists have been fighting to have dolphins recognized as “non-human persons,” with their own bill of rights that would ensure “no person or organization has the right to own a cetacean, or to disrupt their culture.”

The social structures of the average dolphin pod demonstrate that these animals are more than capable of bonding, cooperating, and expressing love for their fellows. Nursery pods, for example, are geared toward supporting the rearing of young calves. A mother and her calf stay together at all times for between three and six years, while female dolphins who have bonded with one another will stay together for a longer period of time to nurture and protect their young. If one dolphin ends up getting stranded, their strong familial bonds and altruistic tendencies lead the rest of the pod to go with them.

Need an even clearer illustration of this? Then take a moment to consider the story of Sampal, a young female bottlenose dolphin. At the age of ten, she was accidentally captured by a fishing net off the coast of Jeju Island in South Korea. Rather than letting her go free, however, the fishers opted to sell her to the Pacific Land Aquarium. She spent approximately three years in a tiny subterranean pool, performing tricks in front of human audiences, before being moved to a temporary sea pen for rehabilitation and an eventual release in 2012.

While in this pen, however, she managed to escape, and headed for the open sea, never to return. There was widespread concern for her well-being, with some saying that she had not been ready for release, and that she would not be able to survive on her own. But on June 27, 2013, she was finally sighted, 100 kilometers away from the sea pen, and accompanied by a pod of 50 dolphins – the very same pod from whom she had been torn away all those years ago.

As Laura Bridgeman, program associate with the Earth Island Institute, puts it,”While we cannot scientifically prove that Sampal longed for her family and they for her, the burden of proof should rest upon those who attempt to explain these events as being a collection of coincidences driven by instinct. With mounting scientific and anecdotal evidence, it is no longer possible to assume that dolphins are not cognitively complex, self-aware beings. And it remains likewise impossible to justify keeping these beings confined for our amusement.”

3. In captivity, dolphins are not supplied with adequate space for their needs.

Salvatore Cardoni, a writer with Takepart.com, shockingly claims that “(e)ven in the largest aquarium facilities, captive dolphins have access to less than 1/10,000 of 1 percent of the swimming area available to them in their natural environment.” In addition, dolphins swim great distances in the wild, with the average distance covered ranging between 40 to 100 miles per day.

When you take this into account, the cruelty of confining them to tiny enclosures – where they are trained through food deprivation, spend the great majority of their time at the water’s surface, and are forced to beach themselves so that visitors can pet them – soon becomes apparent.

4. Dolphins may become suicidal during their captivity.

Ric O’Barry, long-term marine activist and former dolphin trainer, says that his road toward activism began when Cathy, one of the dolphins he had been training for the 1960s TV show “Flipper”:

[She] died in my arms, of suicide. It was just before Earth Day, 1970. The next day, I found myself in a Bimini jail, trying to free a dolphin for the first time. I completely lost it … Dolphins are not automatic air breathers like we are. Every breath for them is a conscious effort. She looked me right in the eye, took a breath, held it – and she didn’t take another one. She just sank to the bottom of the water. That had a profound effect on me.

The issue of whether dolphins like Cathy have indeed been known to take their own lives in captivity, or whether such deaths are natural occurrences, is a controversial one. Dr. Ann Weaver, who researches dolphin behavior in Tampa Bay, Fla., believes that the impulse toward suicide is uniquely human: “I think everything (dolphins) are designed to be is to keep on keeping on. So I think suicide is the curse of human consciousness, but not other consciousness. I don’t believe they give up and that’s what suicide requires.”

However, Dr. Lori Marino, a neuroscientist at Emory University in Atlanta, does not rule out the possibility. She says, “I think the idea that other animals can’t commit suicide because they are hardwired to live is very old fashioned. Basically it says we are aware of what we are doing and other animals are just driven by this hardwired red in tooth and claw to survive, and there is no evidence for that.”