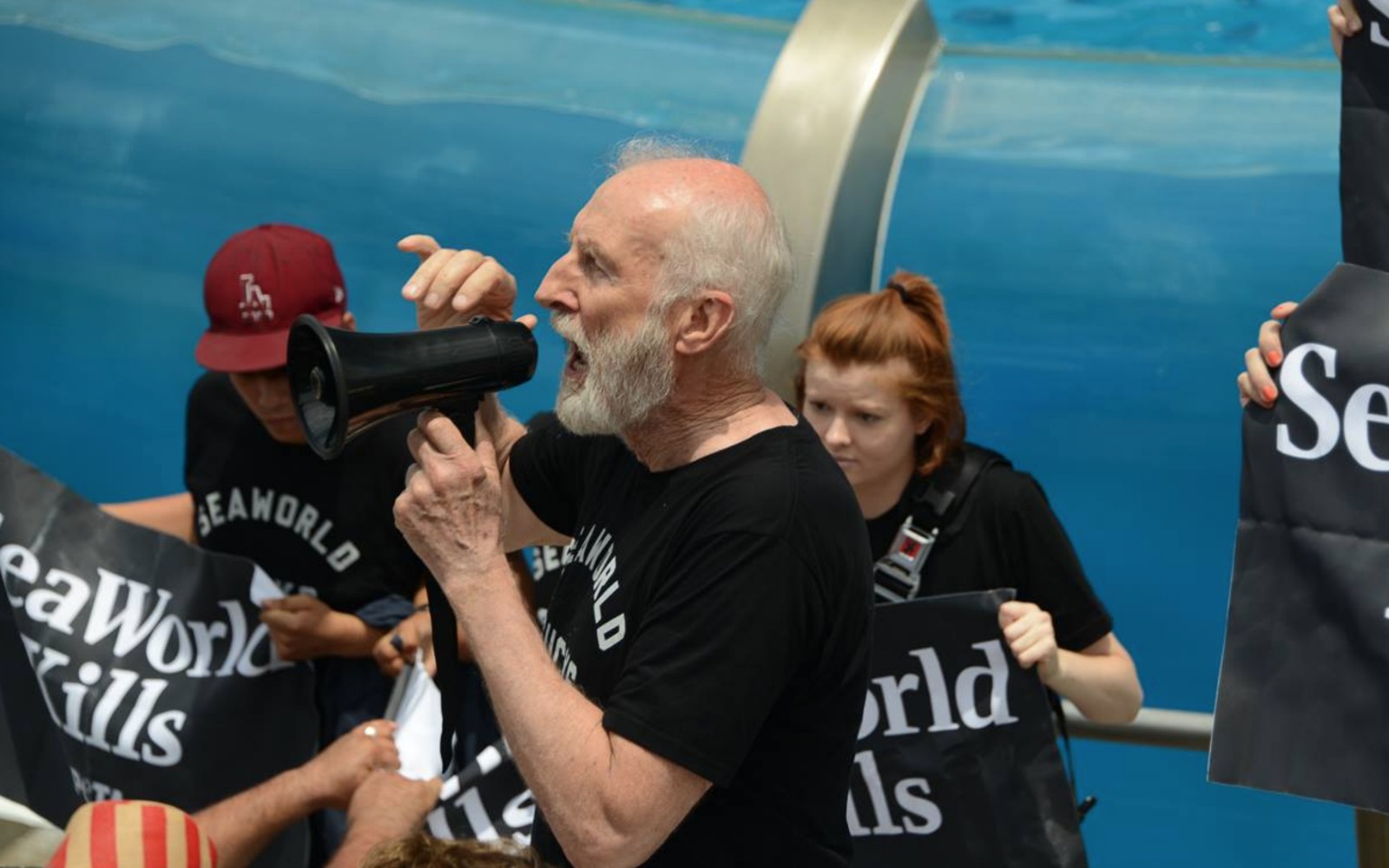 At 77 years old, Academy Award nominee and fierce animal rights advocate James Cromwell isn’t slowing down anytime soon. Cromwell’s journey started over 20 years ago when he starred in the iconic movie Babe, portraying a kind farmer who developed a powerful friendship with an adorable pig who wanted nothing more than to be a sheepdog. The movie gave us the famous “That’ll do pig” movie line, but more importantly, the movie opened up thousands of eyes to the complex personalities of pigs, having grossed $254 million at the box office globally.

The blockbuster even inspired Cromwell himself to reconsider eating pigs. In an interview with Mercy for Animals, Cromwell discusses how the movie inspired him to go vegan, “The film is about what we do to each other by pigeonholing us and other people into certain categories that protect our own sense of entitlement and position and power. The little pig questions that and finds a receptive consciousness in Farmer Hoggett.”

Ever since Babe, Cromwell has fought for the rights of all animals. In between gracing our screens in Six Feet Under and American Horror Story, Cromwell finds time to speak up for those who cannot speak for themselves.

Most recently, the star bravely led a protest in front of SeaWorld’s Orca Encounter Show, bellowing from a microphone and commanding the audience’s attention to the plight of captive orcas.

Cromwell and fellow animal advocates spoke on behalf of the orcas held captive by SeaWorld stating, “Orcas deserve a full life in the ocean, not a life sentence of swimming endless circles until they drop dead from disease. My friends at PETA and I want SeaWorld to move these intelligent animals to seaside sanctuaries without delay.”

Watching Cromwell proudly speak up for orcas left us inspired and reminiscing on the other countless times Cromwell told animal abusers what he really thinks. So without further ado, here are our top five Cromwell boldly spoke up for animals!

1. In 2012, Cromwell joined a Mercy for Animals protest against the cruel treatment of pigs by Walmart pork supplier Christensen Farms. 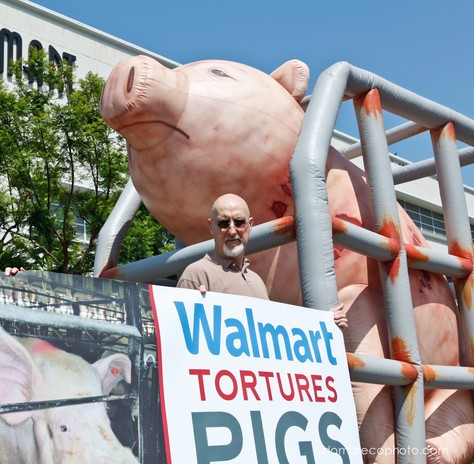 2. Cromwell teamed up with animal rights organization PETA to urge everyone to stop the cycle of violence… starting with animals. Animal abuse is strongly linked with other forms of abuse, such as domestic violence and child abuse. In fact, animal abusers are five times more likely to abuse people.

3. The recent SeaWorld protest wasn’t the first time Cromwell has been arrested speaking up for animals. In 2013, the actor disrupted a UW-Madison Board of Regents meeting, urging them to end their barbaric animal experimentations and was removed and arrested.

4. Cromwell even led a vigil for a jailed foie gras whistleblower after she received 30-day jail sentence she received for her part in documenting cruelty to ducks at Hudson Valley Foie Gras. 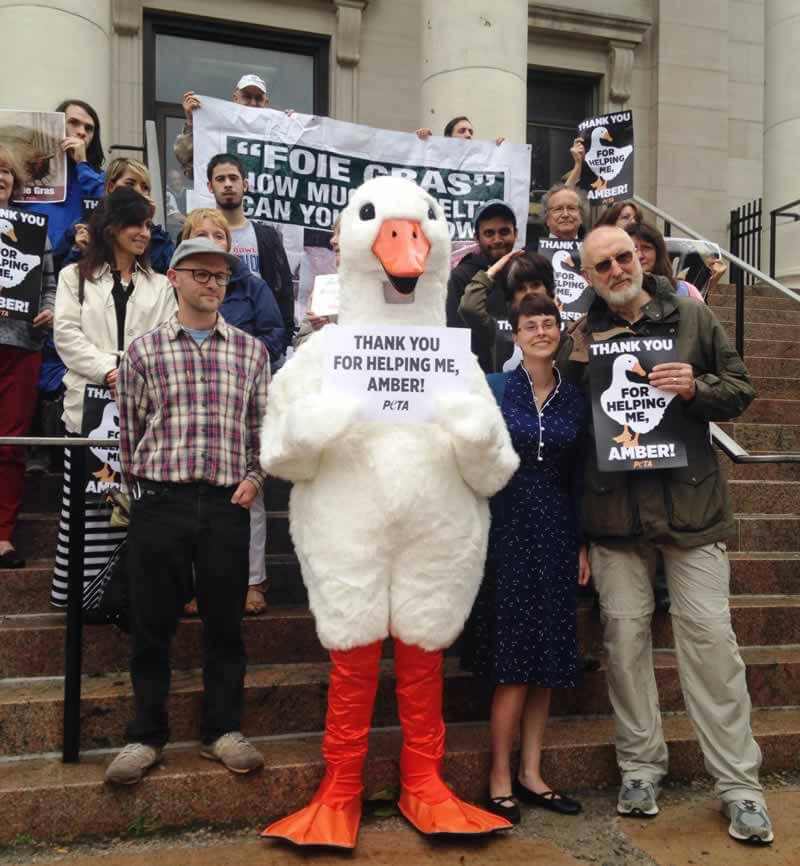 5. The Oscar-nominee has also lent his voice to Mercy for Animals eye-opening documentary Farm to Fridge, which exposes the truth behind meat production.

6. In 2015, Cromwell once again teamed up with PETA to narrate a new undercover investigation exposing the rampant cruelty in the horse racing industry.

When asked by the Humane Society of the United States on what advice he would give people who want to help animals, Cromwell said, “Be the thing you want to see in the world. If you care about animals, get involved in mitigating the suffering that’s right outside your front door. Feed them. Love them. Care for them. Talk about them. Get other people to understand enough to care for them. If we do that, you know, one heart at a time.”

Feeling inspired to help animals? Anyone can be a hero to animals in need. You can join James in protesting the cruel animal agriculture industry by sharing information about the realities of factory farms. Considering rescuing an animal from the shelter is another great way to help. If you want to increase your impact even more, share posts like this one on social media, we all have the power to make a difference for animals!