Combatting Poachers From the Sky: A Look Into the Work of Kenya’s Mobile Veterinarians 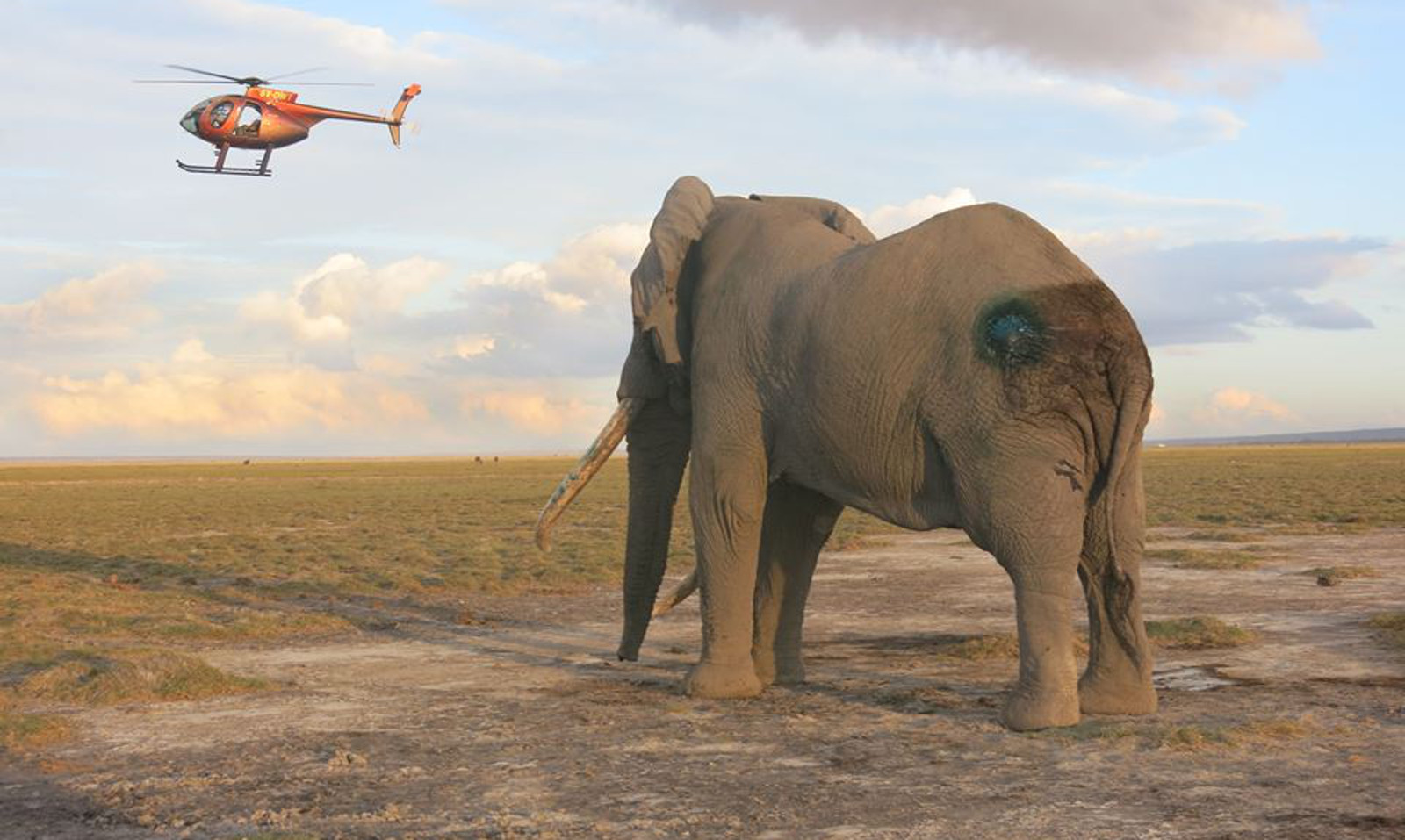 The threats facing the world’s wildlife are multitudinous and extremely serious. From climate change to rapid habitat destruction, we have seen nearly 52 percent of the planet’s wildlife disappear in the past 40 years. While changes in habitat and climate certainly contribute to the loss of many of these species, poaching remains the most pressing and urgent threat facing the world’s endangered animals.

Targeted for their ivory tusks, an estimated 35,000 to 50,000 African elephants are killed every single year. If this rate of poaching continues, it is predicted that the African elephant population will be extinct by 2020. In case that didn’t sink in quite enough … that is a mere six years from now, all for the sake of the ivory trinkets and statues.

Thankfully, not only are people beginning to understand the gravity of the elephant’s fate and advocate against the ivory trade, but there are many organizations working to ensure the protection of these elephants on the front lines.

The David Sheldrick Wildlife Trust (DSWT) is known for their incredible conservation work in Africa. Not only does DSWT run a sanctuary for orphaned animals whose parents were killed by poachers, they also have an Anti-Poaching team that works to actively combat poachers and teams of Mobile and Sky Veterinarians to assist animals who have been injured in attacks.

Not every poaching attempt results in the death of the elephant, especially if DSWT Mobile and Sky Vets are nearby. DSWT has a partnership with Kenya Wildlife Service and together, teams of veterinarians can be effectively notified and deployed if they receive news that a poaching attempt has been made on an animal.

Kenya Wildlife Service veterinary officer, Fredrick Olianga, works with the DSWT Sky Vet team and has helped to same many injured animals in the field. On a typical day, Olianga and his team will receive word of an injured animal in the area from DSWT and set out to locate an obtain the animal in need. 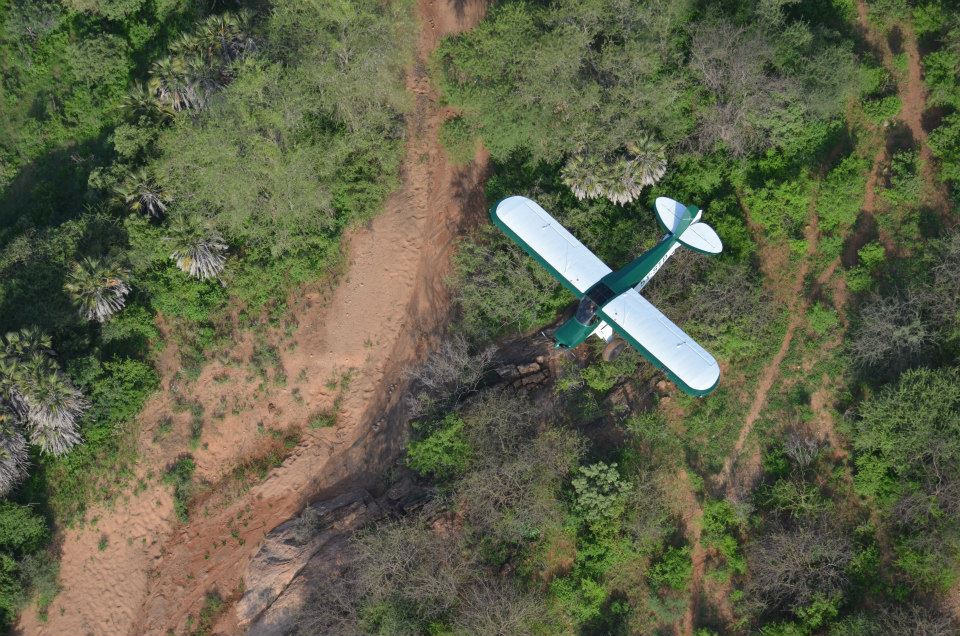 Olianga explains to One Green Planet, “On arrival, we get a team on the ground ready to direct the vet to the sick animal. The animal is treated and observed for recovery from anesthesia then the team sets to fly back.”

While it might seem like this is a simple process, every case is different and depending on the season, the number of animals in need can be exceptionally high.

According to Olianga, the mobile vet team is called into action a number of times every month. On a scale of 10, he tells One Green Planet the frequency of poaching attempts in Kenya ranks at an eight. In the past year alone the Sky Vets and Mobile Vet teams have treated over 151 elephants.

“It does vary from month to month, and with June-September typically the busiest time for poaching in the areas we work in,” explains Olianga, “With help, we are taking action to reduce this.” 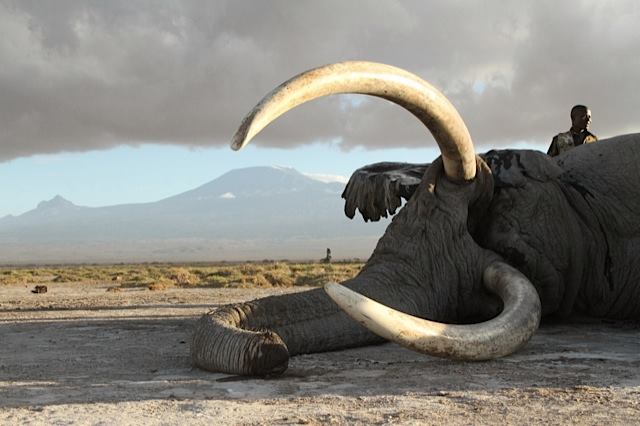 As groups like DSWT work to educate the public about the plight facing elephants, public attitudes towards the ivory trade, and conservation of the elephant in general, are changing for the better. Olianga explains that he grew up in a society where people had little care for the welfare of animals. In areas where the wildlife live in close proximity with villages and communities, these animals are often even viewed as pests, or even as a threat to agriculture. As people begin to understand the important role that the elephant plays in shaping the local ecosystem, and how the presence of these animals can benefit their own well-being, they are more inclined to protect them.

Olianga tells One Green Planet that despite the views of the society he grew up in, “I chose to be different and had a strong will to develop a different perception [about animals] which birthed a career to acquire more knowledge on animals with specific interest in animal welfare, wildlife diseases and public health.”

Given the current crisis facing the elephant, it seems that Olianga’s youthful conviction has served him – and many animals – quite well.

The Benefit of Fast Action

The speed at which the Sky Vets can respond to an injured animal is key. Poachers will often wound an animal and then wait until the injury renders it too weak before they deliver the fatal attack. If the Sky Vet located the animal in time, the odds of their survival are incredible high. In a recent case, the Sky Vet team was able to fly to the site of an injured animal within 20 minutes of receiving notice. Olianga estimates that about 95 percent of the animals they treat survive, “especially if the injuries do not involve the delicate abdominal organs.”

Not every case is this straight forward, however. The DSWT Aerial Team teams were called to treat a famous big tusker, named Tim, who had been injured in Amboseli.

According to Angela Sheldrick, Executive Director of the DSWT, “It is estimated that there are less than 100 Tuskers left across Africa and following the slaughter of famous Tuskers, Mountain Bull and Satao, the future of these majestic monuments of Africa remains bleak. Thanks to the timely intervention by KWS Vet and Aerial Surveillance provided by our helicopter, this irreplaceable elephant was found just in time.”

Although they were given Tim’s initial location, he continued to move, making it more difficult to find him. When they finally located Tim, it was discovered that he had been hit in the hip with a spear about a week prior. The wound had become septic and posed a serious threat to Tim’s health. 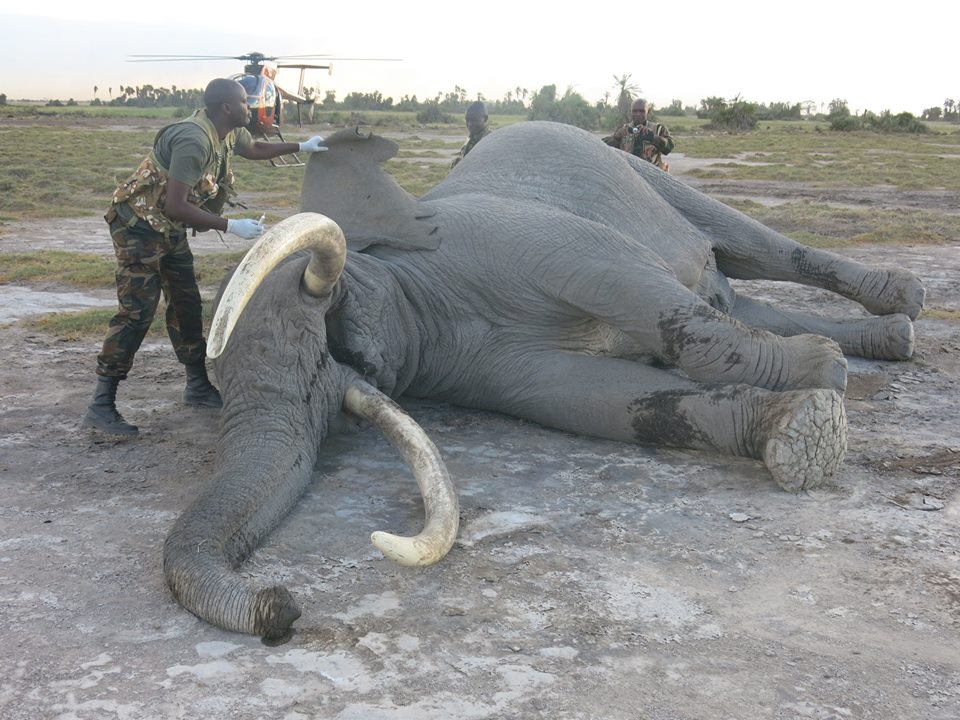 The team had to sedate Tim and perform an operation that lasted 25 minutes, out in the field no less, to remove the infected skin tissue. Once the operation was complete and the anesthesia wore off, Tim was back on his feet and out of immediate danger. His rescuers were able to capture the moment when Tim stood up and watched the team’s helicopter fly off into the distance. 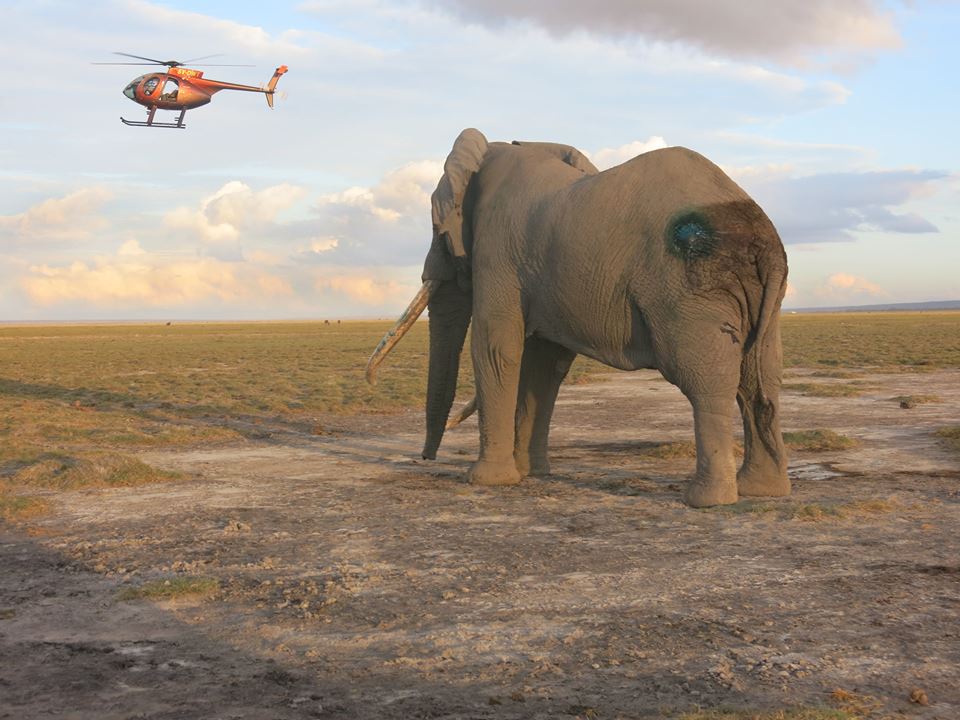 Long-Term Protection for the Elephant

Dr. Olianga and the Sky Vets do incredible work to save injured animals, but their services would not be necessary if there was not such a dangerous price on the heads of these beings. The ivory trade as far-reaching and prevalent as the illicit drug and ammunition trades. Many people do not realize that the United States has the second largest market for ivory in the world, after China. This trade is driven by profit and so long as there is money to be made, the elephant slaughter will continue.

An all out ban on the ivory trade is essential to ending the massacre of the African elephant, however, this may still be a ways off. Olianga is confident that if the ivory trade was shut down on an international level, we could successfully restore the elephant population. The question is if this can be accomplished within the next six years … before it is too late. Olianga and his team can save elephants on a case by case basis, but much more widespread action is needed.

As consumers, we all have the power to cut off the supply of cash that is fueling the ivory trade. When the buying stops, so can the killing.