Where do Dogs for the Meat Trade Come From? Turns Out Most are Stolen From Rural Homes 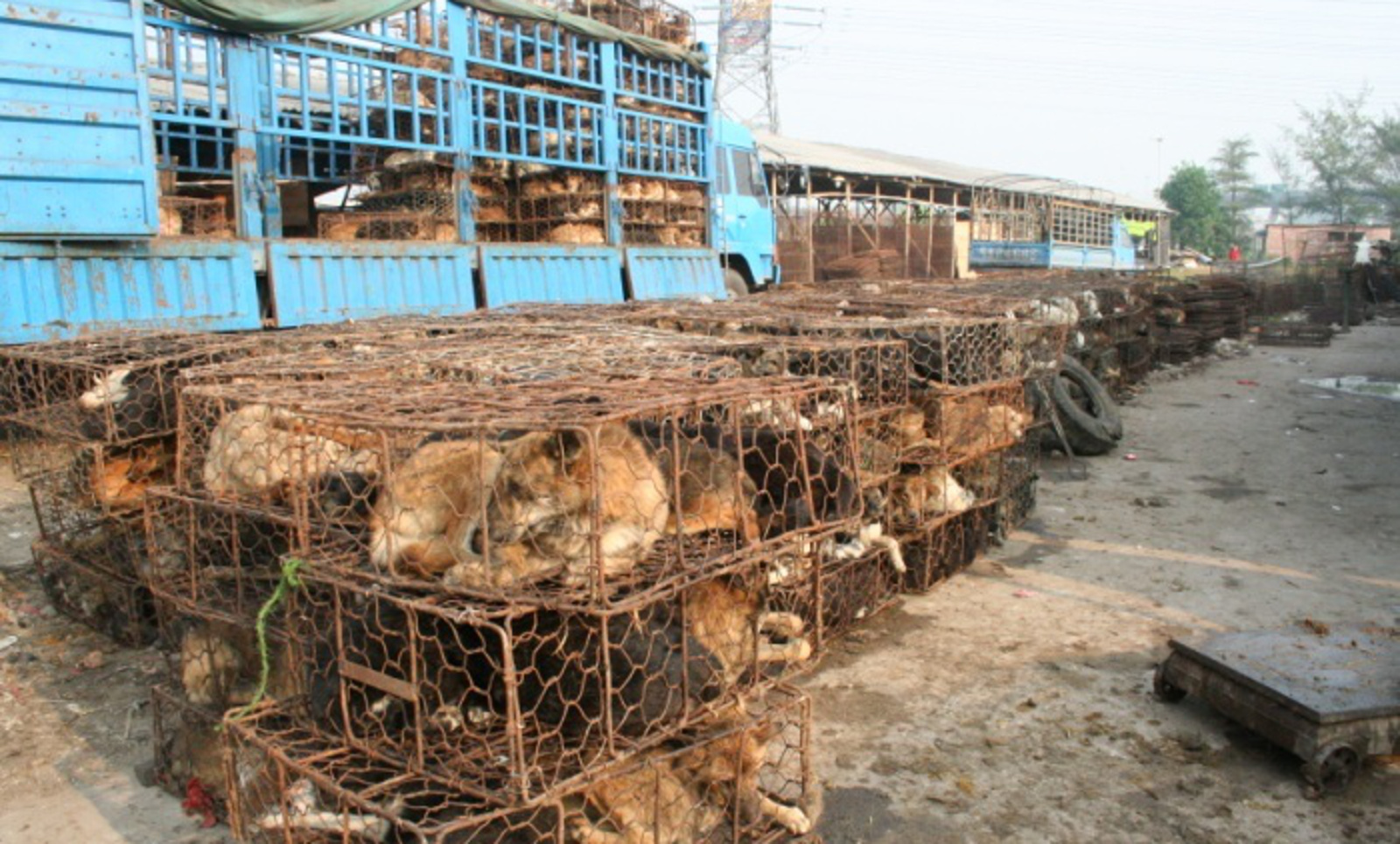 A four-year investigation into the dog meat industry, published by Animals Asia, has uncovered no evidence of any large-scale breeding facilities in the country, supporting long-standing claims that the vast majority of so-called “meat dogs” are in fact stolen companion animals and strays.

Our exhaustive investigation covered 15 cities in eight provinces in northeast, southern and central China, where dog eating is most prevalent. The dogs farms located and visited were found to be farming dogs on a very small scale nowhere near large enough to supply the country’s appetite for dog meat. 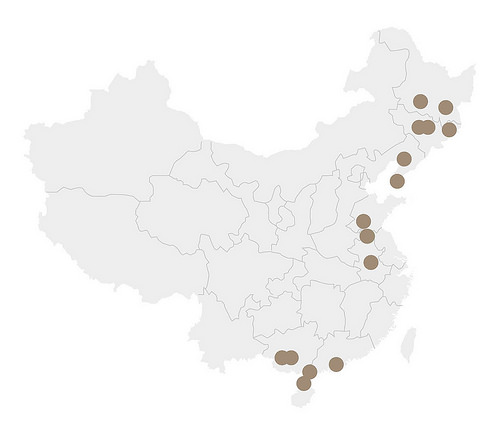 Where are Dogs Coming From?

Media reports estimate up to 10 million dogs are slaughtered annually for meat in China, yet not a single farm visited during our investigation showed evidence of large-scale breeding facilities, where 100-plus dogs were bred and raised.

“Our investigations strongly point to what everybody familiar with the industry has long suspected – that the vast majority of China’s dog meat comes from stolen companion animals and that misinformation and illegality is rife at every stage of the industry supply chain.”

In Jiaxiang County, Shandong, considered one of the country’s most active dog-raising areas, investigators found scant evidence of industrial-scale dog breeding for consumption. While more than 100 dog farms listed online gave the impression of a thriving industry, in reality many alleged dog farms were actually the same entity with different titles, while none had more than 30 adult dogs on site. 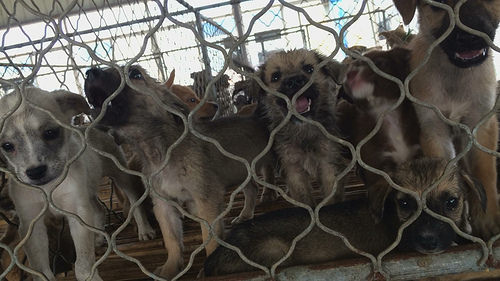 “There were large breeding farms, but not any more, they couldn’t carry on. We also had one of our own before, but we found that the bigger it grew, the more diseases the dogs had, plus the costs were very high. The price of raising the dogs is higher than the market price of dog meat.”

“This is why calls for regulating the cat and dog eating industry are completely wrong. The trade cannot be legitimized because it can only ever survive as an industry characterized by criminality and cruelty. Even those who work in the trade know – there is no legitimate future – there’s only the current brutal status quo or the end of cat and dog meat eating altogether. In that respect the end should be inevitable and we say – end it now.” 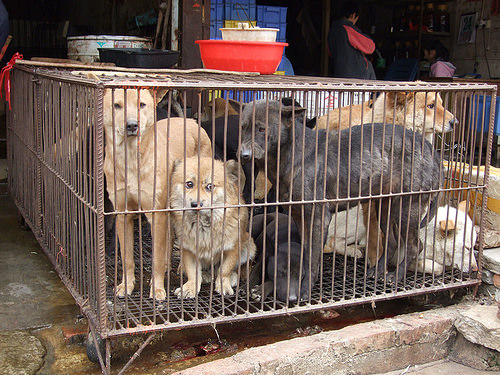 The report has added yet more weight to the belief that dogs cannot be cost-effectively farmed on a mass scale due to the high cost of a meat-rich diet, their highly territorial nature which makes them inclined to fight in confined groups, and the risk of diseases such as rabies.

In 2014, Xia Zhaofei, head of Clinical Medicine at the China Agricultural University in Beijing said:

“Our technology now can realize dog farming, but it entails considerable high technology, and it’s especially difficult, and once something goes wrong, it causes a large number of deaths. Meat from dogs raised on a farm would be expensive at around 100 RMB per jin [1 jin =0.5kg] if everything goes well.” Between 2011 and 2014, the price of dog meat has fluctuated between 6.5 and 23 RMB per 0.5kg (around $1-4 per pound).

When questioned, some workers at facilities claiming to be large scale but with few dogs on site argued that they worked under a scattered “household breeding” model, where the central farm supplies puppies for local households to raise.

However, no farm could provide any details of the locations of these cooperative breeding households and further investigations in local villages also revealed that villagers had no knowledge of such a system. 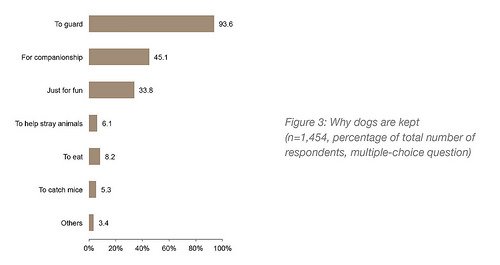 The evidence and testimonies collected suggest that China’s dog meat doesn’t come from industrial scale farms with vaccinations and hygiene standards as required by law, simply because it is not cost-effective.

The history of the Yulin Dog Meat Festival, due to take place June 22nd 2015, shows how, once forced to adhere to Chinese law – profits collapse.

In 2014, the Yulin authorities enforced food safety laws more stringently at the annual event resulting in an estimated 80 percent decrease in the number of canines slaughtered for consumption.

The truth is that far more of the animals ending up on China’s dinner plates are actually stolen companion animals and home guardians than was ever previously imagined.

And these are supplied by roving gangs of violent dog thieves.

In the spring of 2013, Animals Asia investigated the circumstances of dogs living in rural areas of major Chinese cities and the severe threats they faced. A total of 1,468 responses from 771 villages in 28 provinces, autonomous prefectures and municipalities were collected.

An astonishing 70 percent of villages surveyed claimed to have suffered mysterious dog losses, 75.9 percent of which were believed to have been stolen to supply the dog meat industry. Further evidence certainly supports the claim with 73.6 percent of dog disappearances occurring during winter, showing a correlating spike between traditional annual demand for dog meat and companion animal thefts. 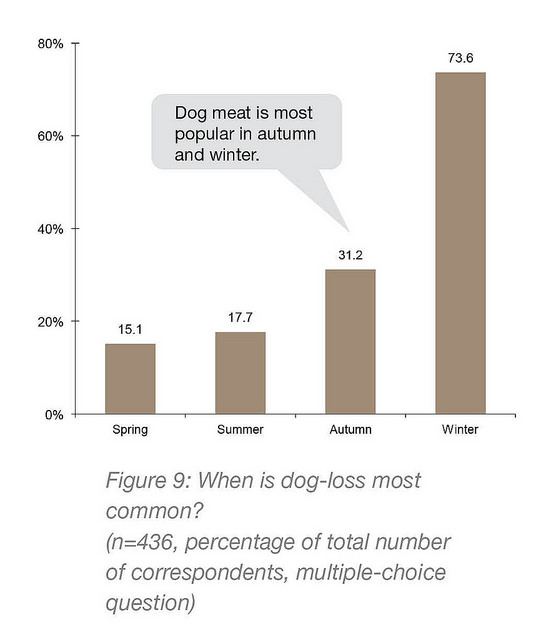 An evaluation of Chinese media reveals the extent of the social disorder being wreaked by dog thieves. More than 710 stories were reported in newspapers across the country between 2001 and 2015, with instances increasing year on year since 2011.

The reliance on stolen animals is undoubtedly increasing – meaning more crime is giving more prosperity and power to the criminals.

The violence inflicted upon animals often crosses over to bodily harm on villagers as 3.5 percent of the villages polled in Animals Asia’s investigation claim to have suffered brutal attacks at the hands of dog thieves during abductions. 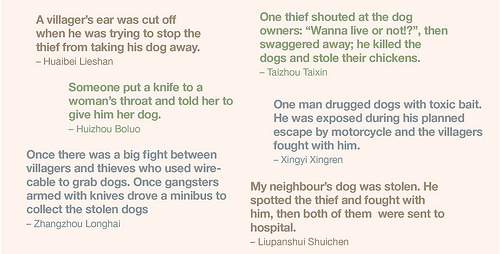 The risks to human health of an industry relying on stolen dogs is clear when it is considered that around 38 percent of dogs in rural China receive no vaccinations. 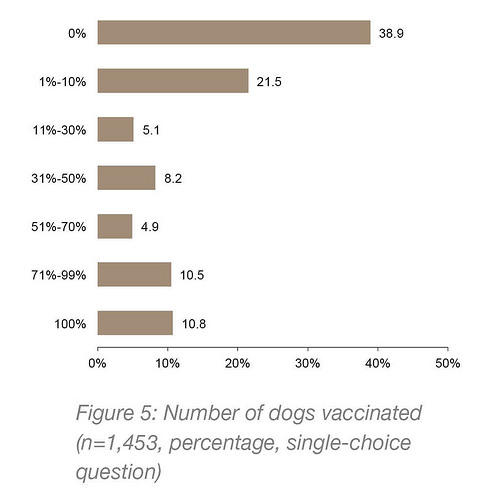 At every stage, investigators found a trade riddled with crime and extreme cruelty, violating existing laws on food safety, while those involved in the industry were highly secretive and suspicious of outside interest in their work.

“A legal industry with proper business practices should have no problem with public and media scrutiny. However, the sensitivity and mistrust shown in each link of the dog meat industry chain during our investigation – from rearing, to transport, slaughter and point of sale, points to unlawful acts being carried out at every stage. For the sake of law and order, food safety, public health and animal welfare, the public needs to know the truth behind the dog meat on their plates – and the country’s own laws must be upheld.”

To read more about Animals Asia’s investigation and learn how you can help stop this cruel practice, click here.