Culture vs. Compassion: Where Does South Korea Draw the Line on Dog Meat? 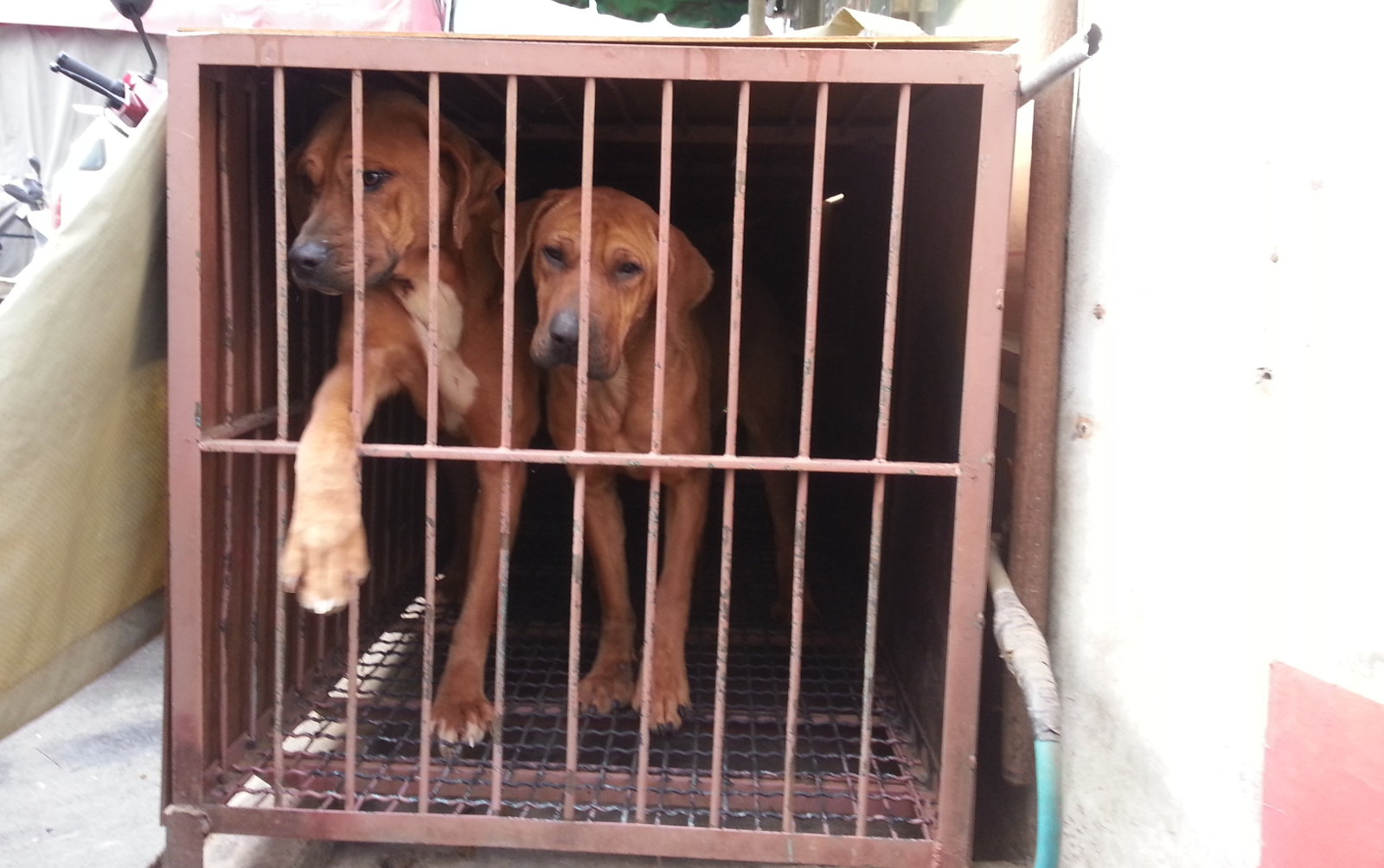 According to Kim Jin-sun, the head of the South Korean organizing committee for the PyeongChang 2018 Olympics, Koreans don’t eat dogs. When asked about the subject this past February at the Sochi Olympics, he declared the issue “cannot be raised at Games time because there is no practice of eating dogs in Korea.” He did allow that “there would have been some people eating dog meat back in past days, maybe during 1988 at the Seoul Olympics but now even around me I do not see anyone eating dog meat.”

The estimated 2 billion dollar-a-year dog meat industry extinguishes the lives of approximately two million dogs for meat — 100,000 tons — and professed health tonics called gaesoju, according to government figures. Dog meat consumption may be declining, and only a small percentage of Koreans eat dog meat regularly, but what has been called the “dog meat culture” remains pervasive. The practice becomes especially ritualized, mythologized, and celebrated during the Bok days of summer (“dog-eating days”), according to the lunar calendar, which fall on the hottest days of the year, when throngs of customers pack restaurants serving dog meat stew (boshintang), because of the persistent belief that dog meat has cooling properties and will strengthen their bodies and help maintain stamina to beat the heat (paradoxically, in Vietnam and China, dog meat is believed to have warming effects, and consumed during the winter months). Though dog meat is officially banned in Seoul, there is little enforcement.

“The dog meat industry is neither legal nor illegal, but, rather, in the grip of a subterranean elsewhere, referred to as the ‘legal blind spot’.”

Choi Yong-hoon, an official at the food agency, said the ministry is cracking down on unsanitary practices in dog meat restaurants. But when asked if selling the meat at a restaurant in Seoul is subject to punishment as per the law, he said he couldn’t comment because it’s a “tricky issue.”

Could Choi Yong-hoon possibly be echoing the words of Dr. Tae-Yung Kim, Ph.D, former director, General Animal Health Division, of the Ministry for Food, Agriculture, Forestry and Fisheries, who told In Defense of Animals (IDA), in late 2011, that “there are no legal grounds for the practice of eating dogs in Korea. A vacuum exists in our legal framework but we’re now at a transformative stage, where people are starting to treat animals with respect and love.” Dr. Kim’s justification of a “vacuum” meant that any legal action would certainly result in a backlash and the need to avoid a “clash of cultures,” as he put it. The dog meat industry is neither legal nor illegal, but, rather, in the grip of a subterranean elsewhere, referred to as the “legal blind spot.” 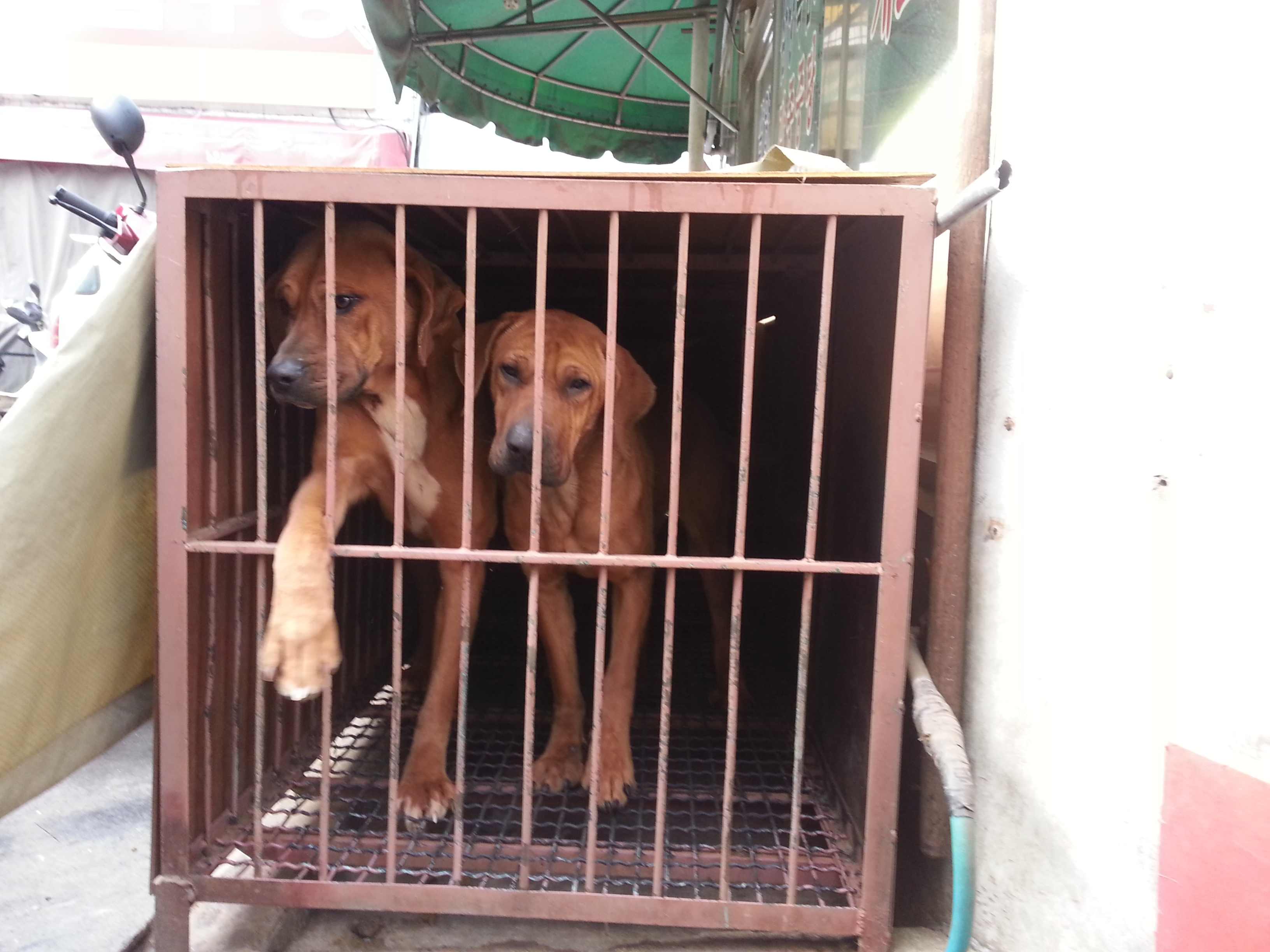 No other “tricky issue” in South Korea is as fraught, taboo, as convulsed with politics, creates such a generational divide, or elicits as much unease as the very subject of consuming dogs, because of the focus on Korean tradition and culture. And yet isn’t culture what societies create for themselves, and how they adapt to change in a new time, a new world? Culture evolves, and what is of real significance is what one shapes for oneself out of one’s conscience and imagination, a rejection of easy beliefs. Blind adherence to tradition is a dangerous and diminishing thing, and there are numerous examples of traditions that have perpetrated great suffering and oppression that have blessedly come to an end such as foxhunting with hounds in the UK, bullfighting in Barcelona, Spain, the banning of animals in circuses in Bolivia.

When it comes to eating animals, not only is there what behavioral psychologists call the “meat paradox ” — loving animals and loving to eat them — but there is also the rationale behind particular cultural choices to do so, despite the pain and appalling cruelty occurring on a daily basis.

Why is taste somehow freed of any ethical system or values? How often must custom and the tyranny of habit impose morally indefensible death sentences for the sake of a meal, in this case, for a bowl of stew?

Dogs are killed with high-voltage electrocution, from which they don’t die immediately, are hanged, beaten to death with a metal pipe, hammer, or club, frequently have their throats slashed, followed by being bled out. They are thrown into a tub of boiling water, then into a rotating drum for the removal of their fur, and finally blowtorched, often while still alive. And perhaps most pernicious of all is the nightmarish fiction, fueled by profit, that the more suffering endured during slaughter, the more tender the meat and more potent the so-called medicinal properties.

Veterinarian Dr. Jeffrey Suh, surgical team leader at Seoul Animal Medical Center, says dog meat is “a food culture at best. I really think this practice is something that Koreans aren’t proud of. I doubt that any Korean will tell a foreigner openly that he eats dogs. Luckily, I don’t know of any young people eating it. What I try to tell people is that the practice is barbaric and quite disgusting, like the consumption of veal and foie gras.” 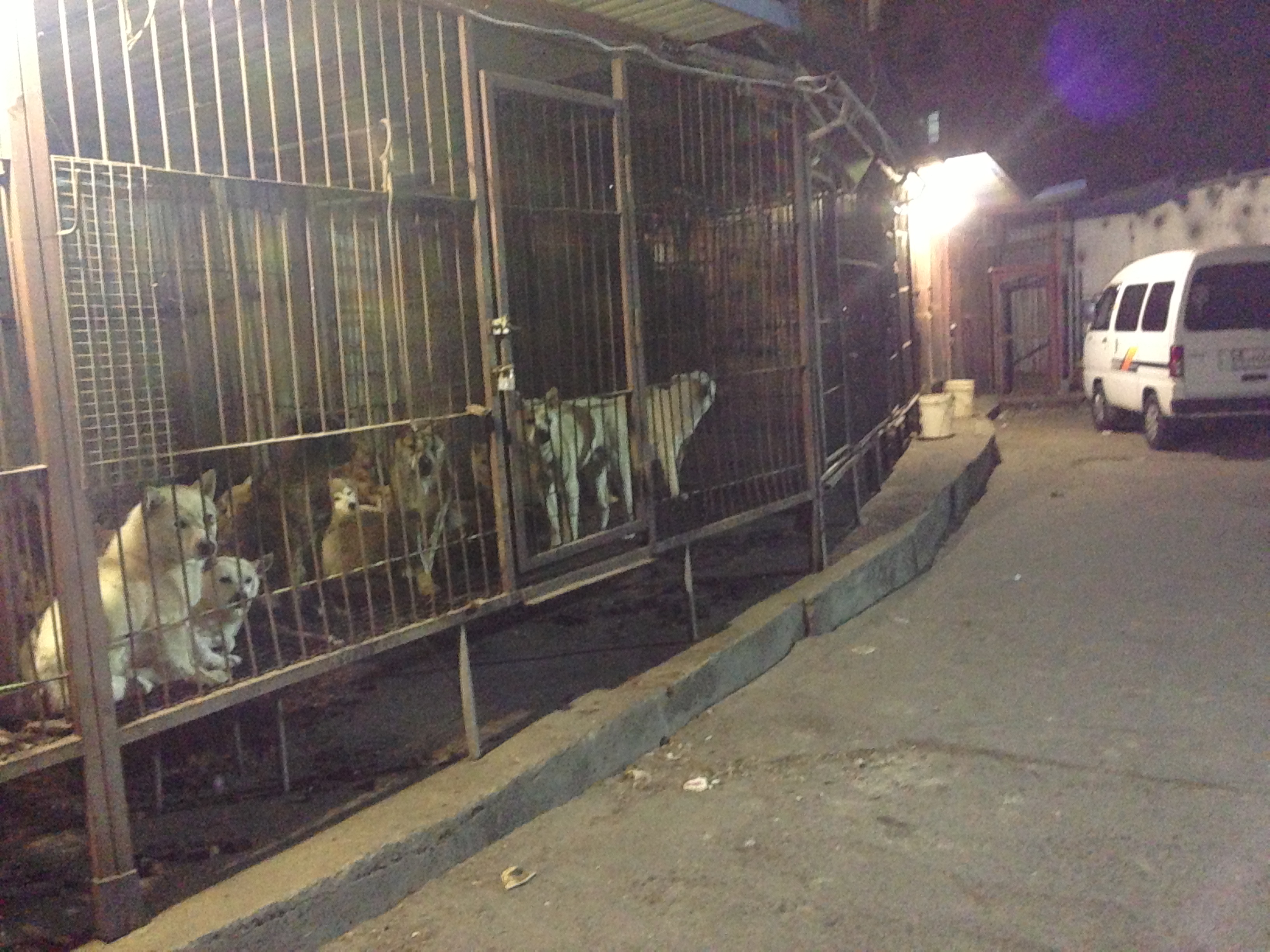 In fact, many believe that dog meat consumption has never been part of the mainstream culinary culture of the Korean people, calling it a culinary sub-culture.

According to Coexistence of Animal Rights on Earth (CARE), eating dogs is part of a “food culture,” based upon purely mythical health benefits distinct from Korean culture. “The consumption of dogs and cats became a kind of ‘tradition’ when the country was impoverished in the sixties and the meat was cheap and easy to get.”

The consumption of dog meat in South Korea can lead to potentially catastrophic consequences of a public health disaster. There is the well-documented widespread use of antibiotics and steroids used to ward off diseases in dogs killed for meat as a grave health concern. “There are a number of antibiotics that dogs routinely get that should not be used at all if they are meant for consumption,” says Dr. Suh. “For example, fluoroquinolones, aminoglycosides, and sulfonamides are all banned in the use of animals killed for food that are used routinely in dogs.”

The Voice of a Younger Generation

Hyundae Kim, a senior reporter for The Hankyoreh, said that for him, eating dog meat is a family tradition. His father took him to have his first bowl of dog meat and he wanted to take his son, who unequivocally rejected the practice, akin to so many belonging to the younger generation.

As many young people say, I couldn’t imagine eating my dog, which is what often happens when one dines on dog meat, despite the myth of two distinct types of dogs in Korea—the “ddong-gae,” literally meaning “shit-dog” bred for consumption, and those for companions.

As a former dog trader said, “Pet dogs are cheaper because they are sold per dog and not by the pound. When you butcher them, you can’t tell whether they are pet dogs or meat dogs.”

And at least one restaurant will no longer have the opportunity to serve either a “meat” dog or someone’s former companion. A restaurant referred to as the “Holy Land of boshintang,” served its last bowl after thirty-three years. The restaurant’s owner, Oh Keum-il, said, “young Koreans grow up watching TV shows about raising puppies and other pets, which sapped appetite for dog meat. There is too much generational gap in boshintang,” said Oh. “There are no young customers.” 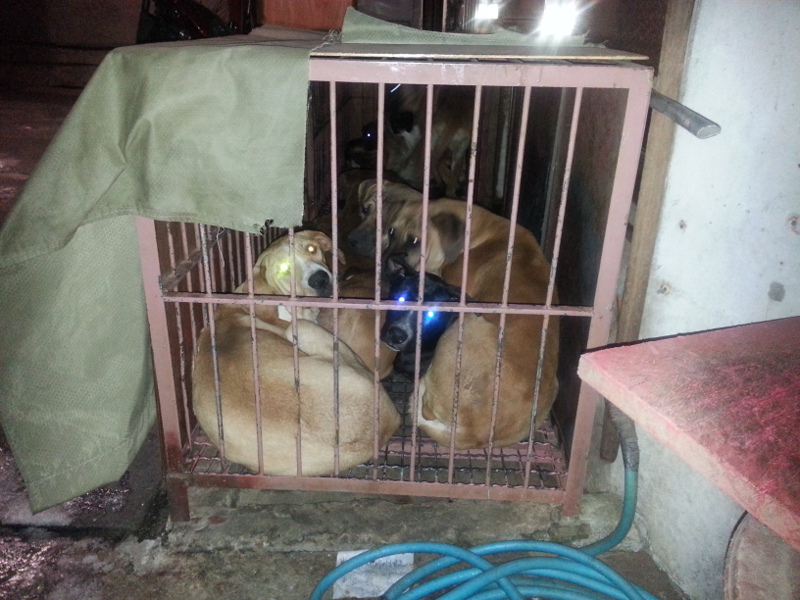 The Politics of Legalizing Dog Meat

Dr. Boyong Myung, a veterinary specialist in shelter medicine and stray animals, who was a member of the Animal Welfare Committee, set up under the Ministry of Agriculture, Food and Rural Affairs (MAFRA), has very forcefully and openly pushed for a ban as the only viable solution to the dog meat industry. He was the only member of the government to speak up on behalf of a ban.

As Hyung Ju Lee, campaign director or KAWA, says, “To legalize the practice of slaughtering, it will be inevitable to enact a “Special Act on Dog Meat Production and Consumption” because of the significant biological and behavioral difference [to other ‘livestock’], but even government officials doubt that the management of the practice will be realistically possible, and that it will be worth it to endure the international criticism and the cost, considering consumption of dog meat is rapidly decreasing.”

Lee continues, “The practice of eating dog meat has been causing various social problems such as animal cruelty, environmental contamination from releasing wastewater, stealing, and illegal trades of abandoned or stolen animals. I believe that banning the practice will ensure public health, create good international publicity, and also improve the standard of animal welfare in Korea.”

With approximately ten million South Koreans now living with animal companions, there is a much greater awareness of animal cruelty.

In fact, animal-protection activism is becoming the fastest-growing civic movement in South Korea and, as a result, there is a growing demand for a ban of the dog and cat meat industry.

IDA is now part of an international alliance of animal-protection organizations working to find humane, sustainable, and economically viable solutions to South Korea’s dog and cat meat trade. To achieve a comprehensive understanding of the dog meat trade in Gupo Market, in Busan, South Korea’s second largest city, the Alliance has commissioned an in-depth research project, conducted by a renowned international company, based in Korea, to attain an economic assessment of the dog meat trade and to identify alternative livelihoods for Gupo’s livestock traders. The Alliance has also commissioned a nationwide public opinion poll on current attitudes toward the dog and cat meat industry.

The Alliance fervently believes that this indispensable research will pave the way forward not only to raise the profile — and opposition towards — the dog and cat meat market, but also in order to present our findings to the Korean government in the hope of securing a permanent ban on dog and cat meat. Busan’s Gupo is but a microcosm of the entire dog meat trade in Korea, and what happens there will certainly reverberate throughout the region.