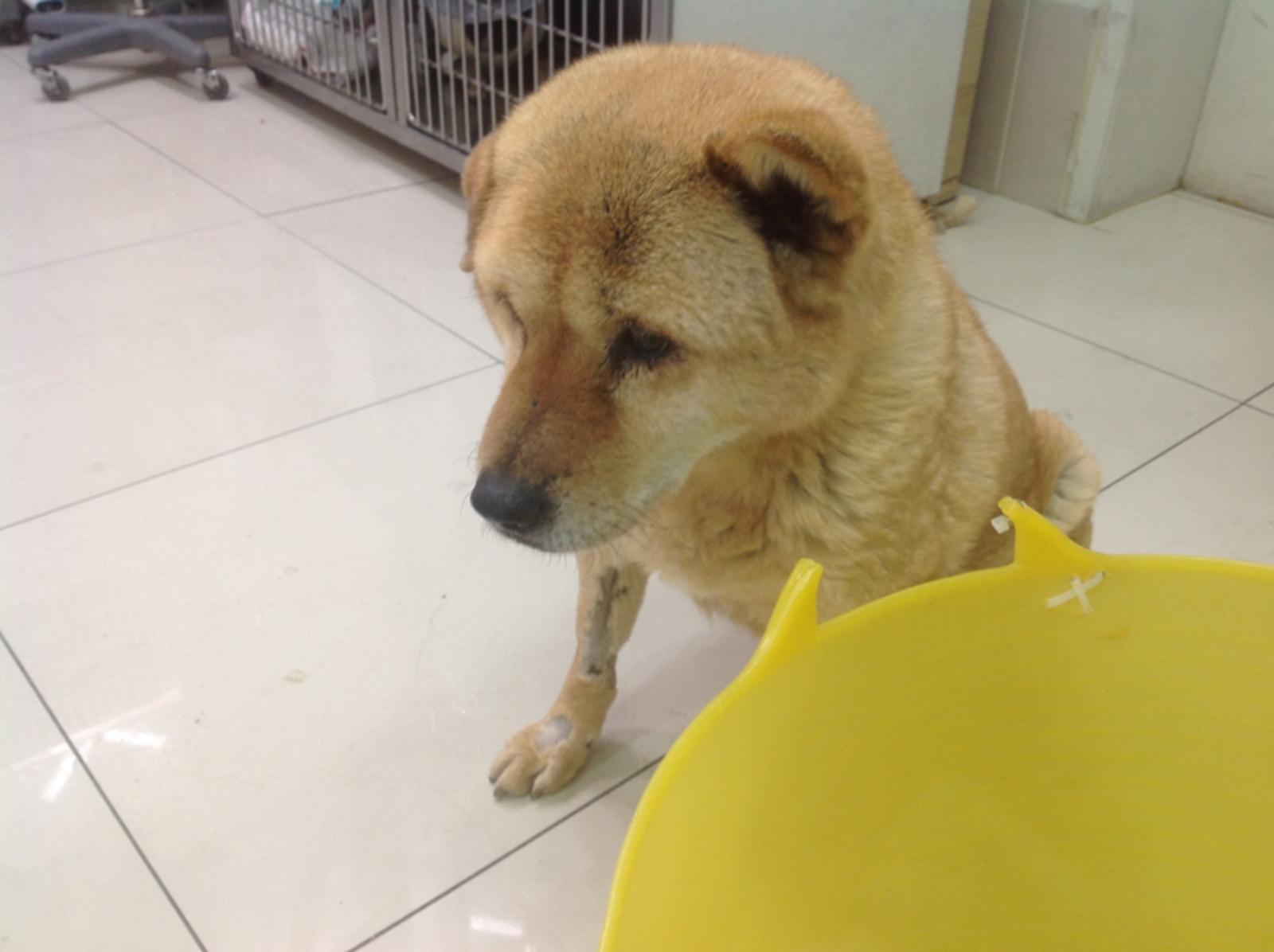 South Korea’s Moran Market conjures up any bustling farmers’ market — thronged with shoppers, talking and bargaining, all very lively and cheery. But on the days when the entire folk market is open, more street vendors are on site, stationed beneath colorful umbrella stands (selling everything from veggies to clothes to housewares).

On these days, the dog sellers congregate in front of 21 stores, selling dog meat as well as the so-called dog elixirs or gaesoju. This is the notorious “dog-meat market,” Seongnam-city’s macabre outdoor nightmare — the dog meat industry’s iconic heart of darkness.

Here, the other merchandises for sale include: cages and cages stuffed with chickens, ducks, roosters, black goats (extracts and soups), bunnies, kittens (medicinal extracts, stews, and soups), and the crush of so-called “meat” or yellow dogs (Nureongi), ubiquitous, in obscenely filthy cages, huddled up against one another, a few staring out with defenseless, tormented despair.

Their misery is mostly silent, except when a dog is suddenly and violently pulled out from the cage, spreading a feeling of dread and agitation, and then the barking, and even howling, begins. Among all the so-called “meat dogs,” bred on farms, are animal companions, deconstructing the insidious myth dreamed up by the industry of two types of dogs: edible or “meat” and companions.

Any dog ends up in the meat trade — former companions abandoned or abducted, dogs from puppy mills, shelters, closed auctions, purebreds — any dog can be slaughtered for food. As a former dog trader said, “Pet dogs are cheaper because they are sold per dog and not by the pound. When you butcher them, you can’t tell whether they are pet dogs or meat dogs.”

Amid the rot and stink of the buying and selling, the weighing of dogs, the slaughtering in the back of stores, the blood everywhere, there is the hauntingly piercing sound of a blowtorch that scorches the skin, tenderizing the meat. There are the chilling pairings of dog carcasses and prepared dog meat displayed everywhere on trays, right next to the cages of captive dogs who wait. There is a rottenness breathed with the air, mixed with the stench of urine and feces and fear.

This side of Moran Market, across from the housewares, is a portrait of torture and murder. Because customers generally prefer their meat without blood, the killing process more often than not involves torture to cause more injuries, not allowing the dog to bleed out more easily but adhering to the pernicious fiction that the greater the terror experienced, the tastier and more tender the meat.

This past January, on a cold night when snow began falling in Seoul, at around two o’clock in the morning, Lola Webber, programs leader at Change For Animals Foundation, activists BK and Yuni, and I, entered Moran Market to pick up a dog we had seen earlier in the evening, miraculously not in a cage, and get her to a veterinary hospital. There was a white haze over the market, but it didn’t obscure the misery and the peril of her life. We spotted this seemingly lifeless figure lying amid garbage around the back of the stores that sell meat.

When we approached her, she looked at us but didn’t move. She seemed very ill. Right above her was the rotating drum — during slaughter, dogs are thrown into a tub of boiling water, and then into a rotating drum for the removal of their fur, and finally blowtorched, often while still alive. 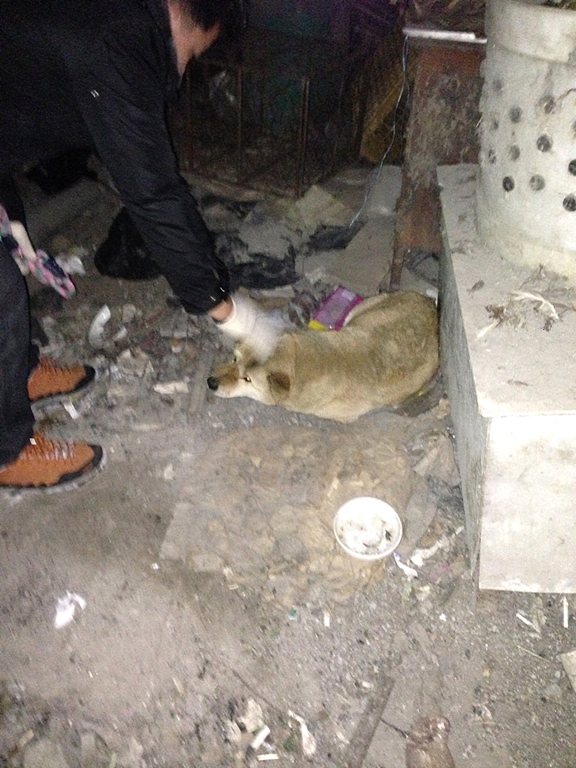 We carefully removed the dog we named Somang, meaning “wish” in Korean, and drove her to Seoul Animal Medical Center, where Dr. Jeffrey Suh, surgical team leader at the semi-referral practice, became her personal vet. With his vast medical talent, brilliant instincts, and great warmth treated both body and soul, helping this beautiful but debilitated and ragged Jindo mix, with her nearly imperturbable calm, to regain her balance. 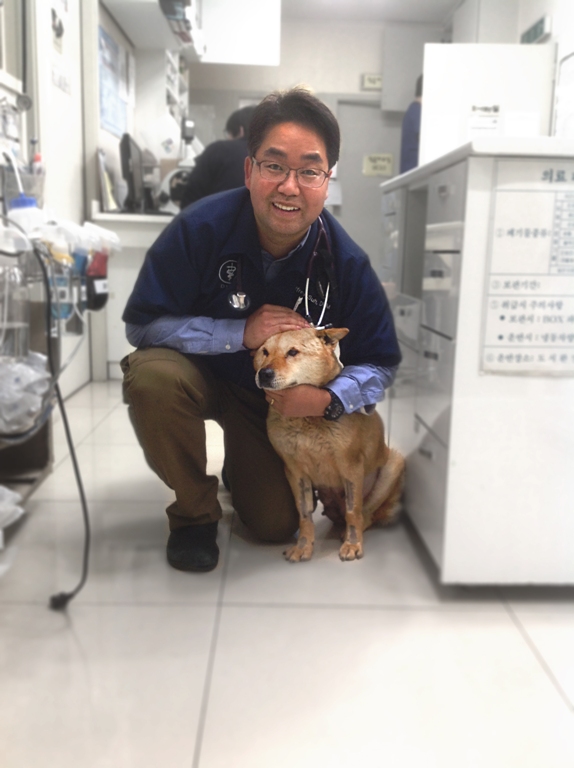 Every illness is a story. As Dr. Suh explained it, Somang was suffering from a fractured femur of the right hind limb, heartworm infection, mild dehydration, a mass on her mammary glands and on her vulvar area, endometrial hyperplasia on her uterus, weakened kidneys, and a cyst on her liver, but her blood work was normal, aside from malnutrition. She also had disc anomalies on multiple areas of her lower vertebrates but, again, there was no hampering her ability to walk. 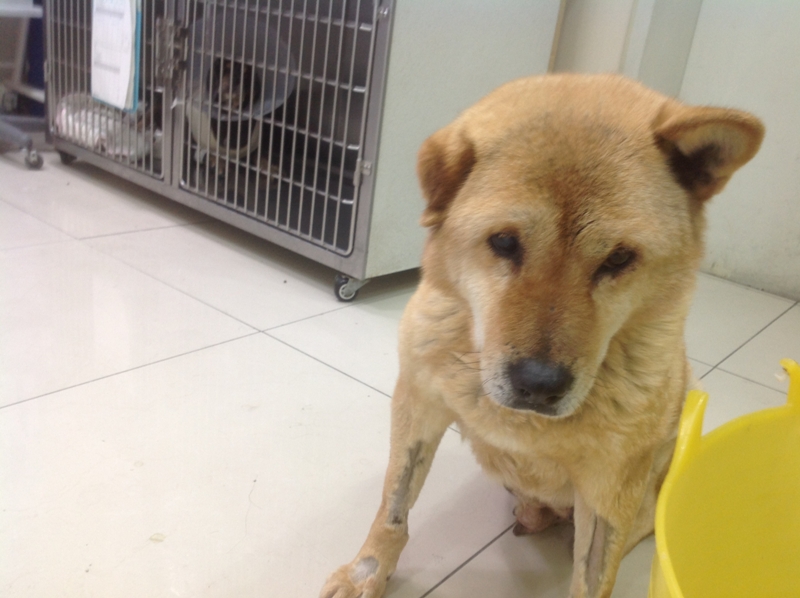 With her incandescent presence and ability to charm everyone at the hospital, the decision to save her was an easy and heroic one. Dr. Suh, who once volunteered at a U.S. military veterinary hospital under a surgical specialist, and I agreed that Somang, although far from young, and with a host of serious ailments, must experience her own dreams, delights, and joys in abundance. 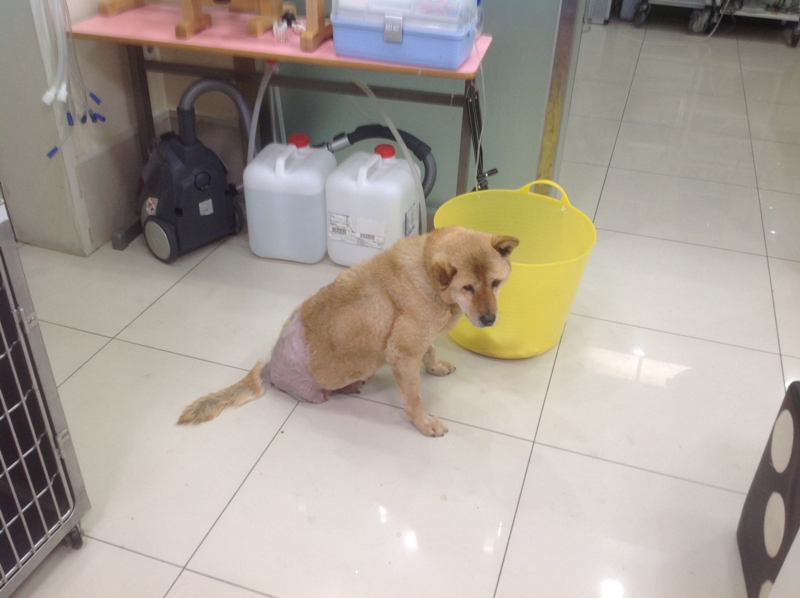 Somang was immediately put on an action plan to diminish the adverse effect of heartworm treatment, allowing her time to recover from dehydration and malnutrition. On intravenous fluids, and once feeling better, her broken leg was amputated, and she recovered beautifully. 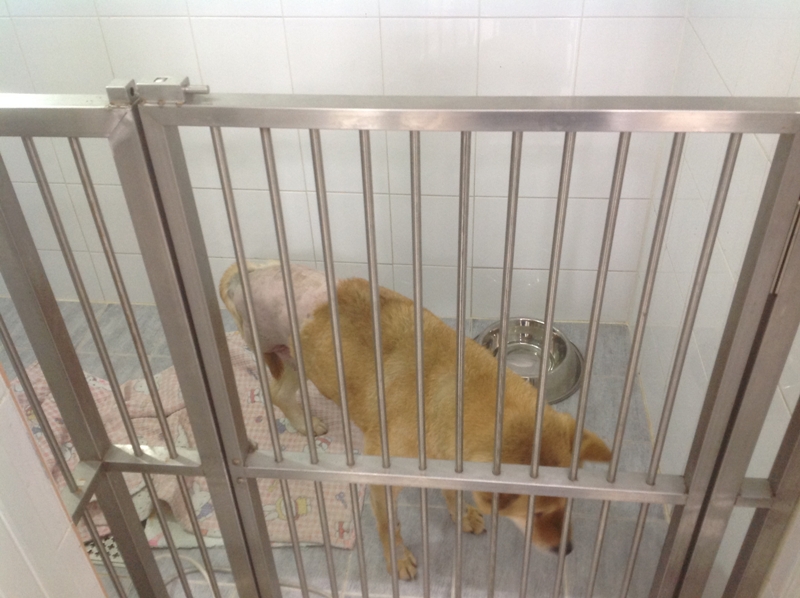 Ten days after surgery, she began her heartworm treatment, which can be painful, but Somang handled it with her usual ease. She received three injections, a week apart, and an intravenous injection of a steroid and antihistamine to counter any unpleasant reaction. Befitting her personality, she took all of this in great stride, and made the hospital hers, strolling among the dogs and cats with that singular Somang sociability. 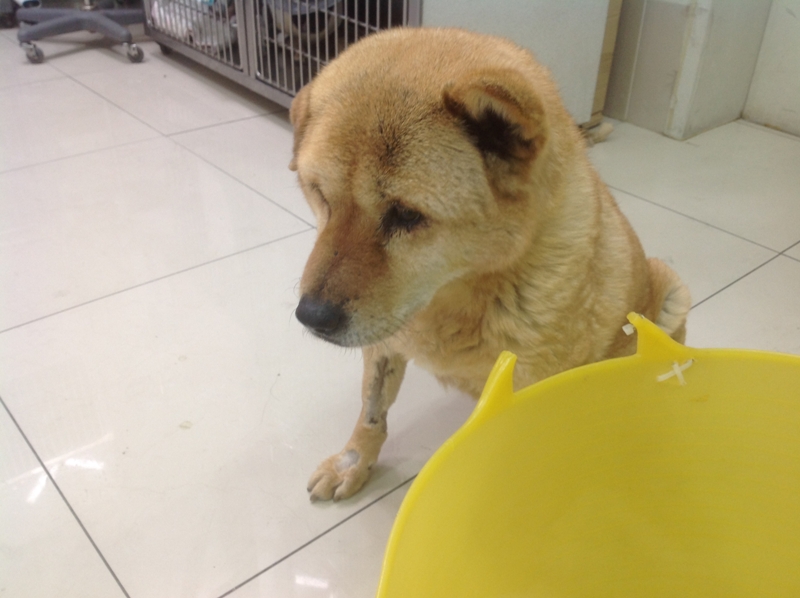 It appears that Somang was hit by a car and then dumped at Moran Market, knowing that she would become dog meat. If we hadn’t taken her, we have no idea how many days she would have lived, if one more day, either because of dehydration or because she would have been killed very shortly for her meat. But we also entertained the idea that she was someone’s companion, and therefore, could have been taken or, because of the accident, abandoned. It’s anyone’s guess. And now Somang represents all the nameless dogs and cats who have perished in this abomination of an industry.

A rescue organization called Rescue Dogs Rock, based in Chester, Pa., is drawn to saving the abused, scarred, ill, and discarded — all outcasts. When the organization received a number of posts on its Facebook page referring to my previous blog about four recent rescues in South Korea who needed homes — Nunnie, Gracie, Hyung, and Somang — co-founder Ginny Chappell immediately wanted to help.

Within days, she had secured a perfect foster named Regina, who has two dogs and two cats, and said she wanted to create a calm environment in her home and fill Somang’s days with toys, short walks and treats, and plenty of rest.

“When she is at our home,” Regina wrote, “we will treat her like she is one of our own.”

Once settled into her foster home, Somang will have to have her mammary glands removed but, as is her style, she will face it with her usual sweet disposition. Out of a deadly place, a jubilant start to a new life has arisen — a life where Somang will finally be free from suffering.

Update: It was just learned that Somang, along with Gracie and Hyung, are being transported from Seoul to Los Angeles on Saturday, April 5, arrival time, 5:55 PM, on the first leg of their trip to the States. Tom Ochs, Hyung’s rescuer, will be accompanying them on the flight. Dr. Suh thought it would be best for Somang to fly a shorter distance and rest for a few days before departing for the East Coast, where she’ll live with Regina for as long as she needs to recover and then on to her own dream space of a permanent home.

All images: In Defense of Animals