I write this sitting in an apartment off Avenue de Claude Bernard in Paris, where I am living for a week. Claude Bernard was a famous nineteenth-century physiologist and notorious vivisector of nonhuman animals whose abuse of them in search of data about livers and pancreases and vaso-motor nerves repulsed even his wife, who eventually divorced him and set up an anti-vivisection society.

Bernard explained himself thus: “(t)he physiologist is no ordinary man. He is a learned man, a man possessed and absorbed by a scientific idea. He does not hear the animals’ cries of pain. He is blind to the blood that flows. He sees nothing but his idea, and organisms which conceal from him the secrets he is resolved to discover.”

Dr. Susan Larson: the Captor of Hercules and Leo

I will leave his DSM-5 diagnosis to the reader. I was reminded of Claude Bernard when I read an interview that Dr. Susan Larson, Hercules and Leo’s chief jailer, recently gave to the magazine Science. We at the Nonhuman Rights Project (NhRP) were not certain she existed. Dr. Larson had almost two years to respond to NhRP’s inquiries about Hercules and Leo; she had more than a month to defend her six-year imprisonment of Hercules and Leo in response to the Order to Show Cause issued by the New York County Supreme Court after the NhRP demanded the chimpanzees’ release pursuant to that state’s habeas corpus statute. During all this time she remained silent. Now that she has finally spoken up and chosen to try the matter in the pages of Science, I can see why.

In many ways, Larson is no Claude Bernard, but not in all. She admits that her work, funded by millions of dollars of National Science Foundation money, and which includes inserting fine-wire electrodes into the chimpanzees’ muscles, has been for the purpose of furthering her understanding of “how early hominids like Lucy moved around.” Larson also told Science that she could not conduct her research in a zoo or sanctuary because “(a)nimals in zoos and sanctuaries are notoriously unwilling to do what we want them to do.” Conducting research in these venues would inconvenience Larson in more ways than one as no chimpanzees can be found in any New York zoo or sanctuary.

More troublingly, Larson bizarrely views her chimpanzee prisoners as “collaborators, as willing participants in the project.” She may need to believe such a tortured narrative, but almost no one else does. Larson proudly describes the world in which she has for so long condemned Hercules and Leo to live. It is, she says, “a very large facility. It’s the equivalent of three moderate-sized bedrooms that are adjacent to each other. They have hammocks, ropes for climbing, and magazines to tear up. We have an animal handler whose job is to keep them comfortable and stimulated. She hides treats in cardboard boxes and gives them plastic toys like airplanes to play with … We don’t want them to feel threatened or frightened; otherwise we wouldn’t get reliable results.” Larson declares that she and her team “don’t do anything with these chimpanzees that we haven’t done on ourselves.”

But there is no evidence that she has herself locked in a cage the size of her “very large facility” with just one other human being for company for six years, with just newspapers to tear, plastic airplanes to manipulate, food to search for in cardboard boxes, and jailers who want to insert fine-wire electrodes into her muscles.

This brings to mind the words of a British Member of Parliament from a city that had grown rich from the slave trade; during the nineteenth-century debates on ending that trade, he waxed eloquent on the floor of the House of Commons about the benefits of being a slave until, carried away by his oratory, he declared, “I wish I were a slave!” Alas, Larson “find(s) a lot of what the other side is saying is very untrue and hurtful. It’s upsetting when someone calls you an evil scientist, or when they say we’re causing pain or needless suffering. It’s strange to hear people talking about these animals when they don’t know who they are.” Larson’s tired claim that ignorant, uneducated, animal rights advocates are unfairly attacking a virtuous scientist would be amusing were it not so sad.

The Other Side of the Issue

In support of its habeas corpus action, the NhRP produced 100 unrebutted pages of supporting affidavits from nine honors-laden experts from five countries (one has three doctorates) citing more than 400 scientific articles that detail more than forty relevant complex mental abilities chimpanzees possess. These affidavits demonstrate that chimpanzees are autonomous and self-determining beings and that prisons such as Larson’s inflict psychological and emotional damage on them. Has Larson ever bothered to go to Africa to see what a chimpanzee looks like when he is living freely? Most of these experts have. And so have I. 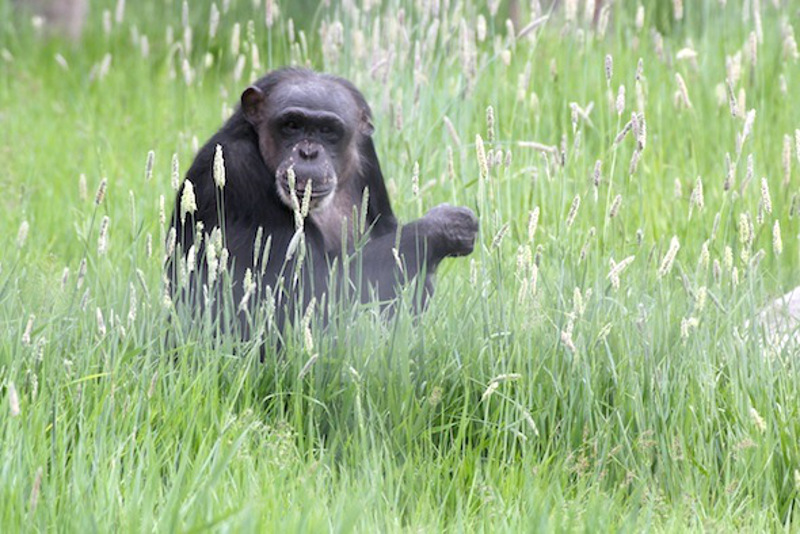 Larson does venture her legal opinion that “giving [chimpanzees] personhood is a sham. If anyone treats them like people it’s us.” She thereby demonstrates her continued cluelessness about what the NhRP is actually demanding. We are not demanding that Hercules and Leo be treated as people, but rather that they treated as “persons” for the purposes of a common law writ of habeas corpus so that they can then be treated as chimpanzees. All legal history tells us that the only way anyone’s fundamental interests can be protected is by treating that being as a legal “person.”

Finally, Larson, who cannot imagine a relationship between humans and chimpanzees that does not involve the former exploiting the latter, bemoans the fact that “(p)retty soon the kind of work I do will not be possible anymore. We’re going to end up with chimpanzees completely cut off from humans; they’ll become alien beings. And that makes me sad, because I think there are still a lot of things we can learn from them.” The primatologist Roger Fouts’ encounter with the signing chimpanzee Booee in a biomedical research laboratory makes clear what Larson would learn from Hercules and Leo if they knew how to communicate with her: “Key. Out.”

To learn more about the groundbreaking work Nonhuman Rights Project is doing to help captive animals, check out their website, here.