Get Your Creep On! 7 Ways to Treat Your Guests With Savory Halloween Dishes 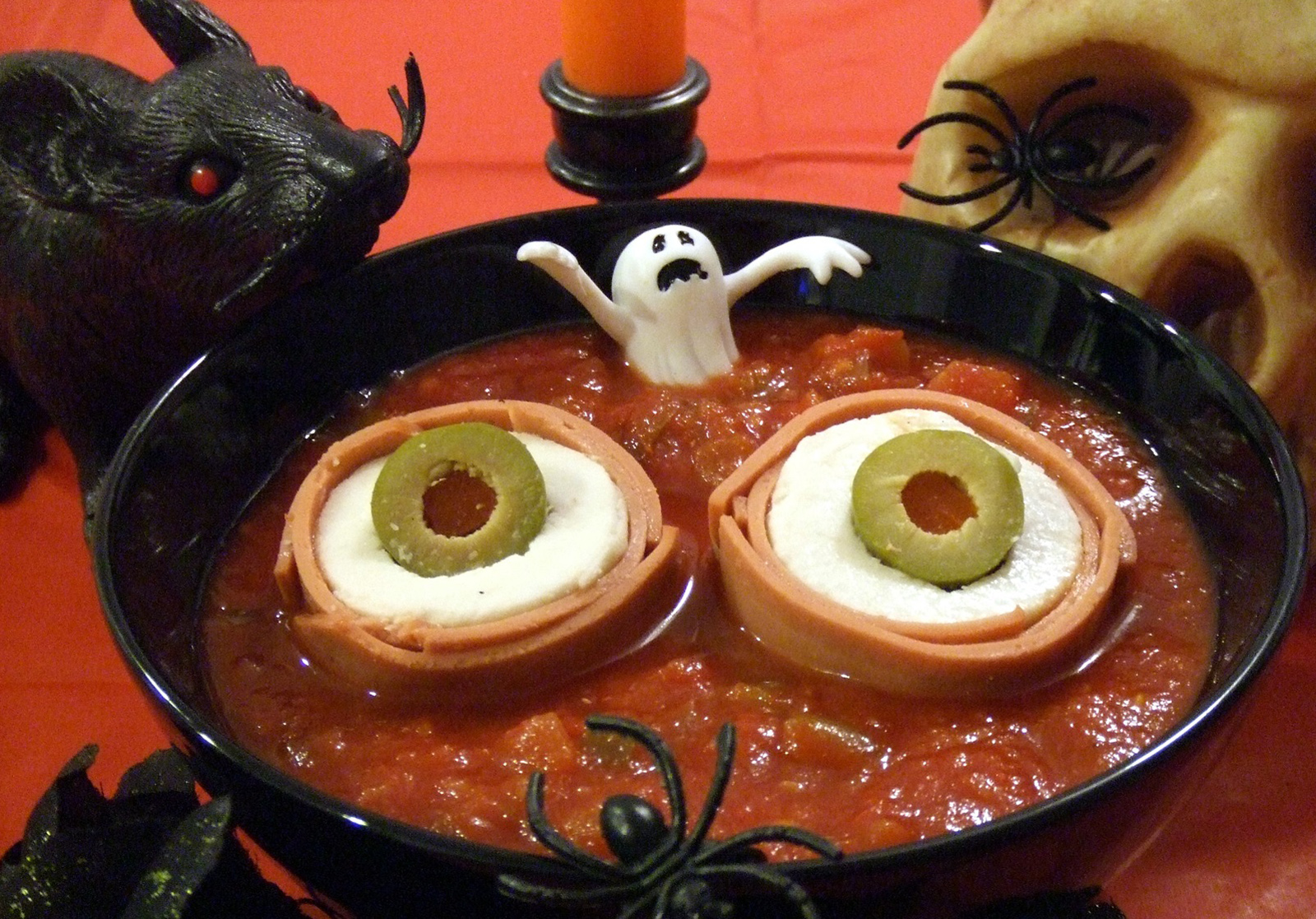 When anyone thinks of Halloween, the first food that comes to mind is probably candy. Children and adults alike look forward to dressing up in costumes, going door to door or to parties, and filling their “trick or treat” bags with lots of yummy candy. There is candy corn, lollipops and of course, chocolate, but what about people (like me) who prefer savory to sweet food? I would trade a whole bag of candy for one indulgent, savory dish. Even if you do love sweets, it is also fun to put a Halloween spin on other dishes such as appetizers, sandwiches and entrees. Here are some ideas and recipes for spookalicious, savory Halloween dishes that will delight all the boys and ghouls.

1. Put a Scary Spin on Recipes

To make savory Halloween dishes, all you have to do is use your imagination to take foods you already cook and give them a spooky look. Here are some ideas featuring some awesome One Green Planet recipes. 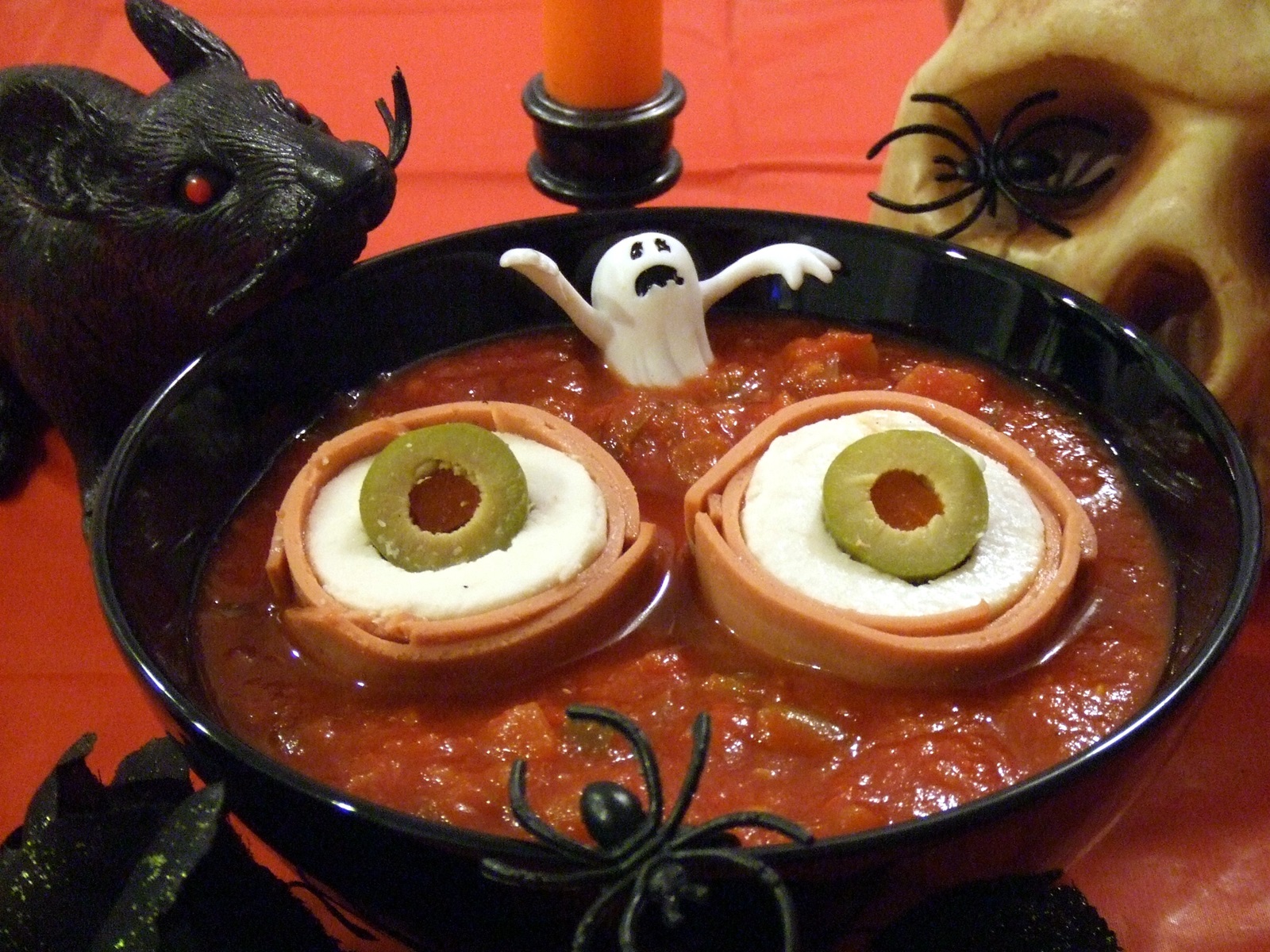 This recipe was one that I first made when I participated in a challenge from a television cooking show. The challenge was to remake a recipe of theirs each week and post a photo of it online. I not only made the recipes, but I veganized them. When I posted them online, I got to show thousands of people that it was possible to make the same dishes without any animal products. This recipe makes four big eyeballs, so you would want to make as many eyeballs as necessary for your number of guests.

To make Vegan Mozzarella Eyeballs in Bloody Salsa: Slice 4 large green pimento-stuffed olives into disks about ¼-inch thick. With a cookie cutter, cut 4 rounds out of 2 blocks of vegan mozzarella cheese. Place an olive disk in the center of each cheese round and with a paring knife, trace around the olive. Cut out a chunk of the mozzarella from the outline so that the olive can fit inside the hole. Wrap 2 vegan deli slices around each of the cheese eyeballs. You may need to hold them in place with toothpicks. Fill 2 bowls with 1 cup of store-bought or homemade salsa each and carefully place your eyeballs…well, 2 of the eyeballs you made…into each bowl. Alternatively, you can fill a large bowl with salsa and have lots of eyeballs staring at your guests.

3. A Graveyard of Coffin Sandwiches 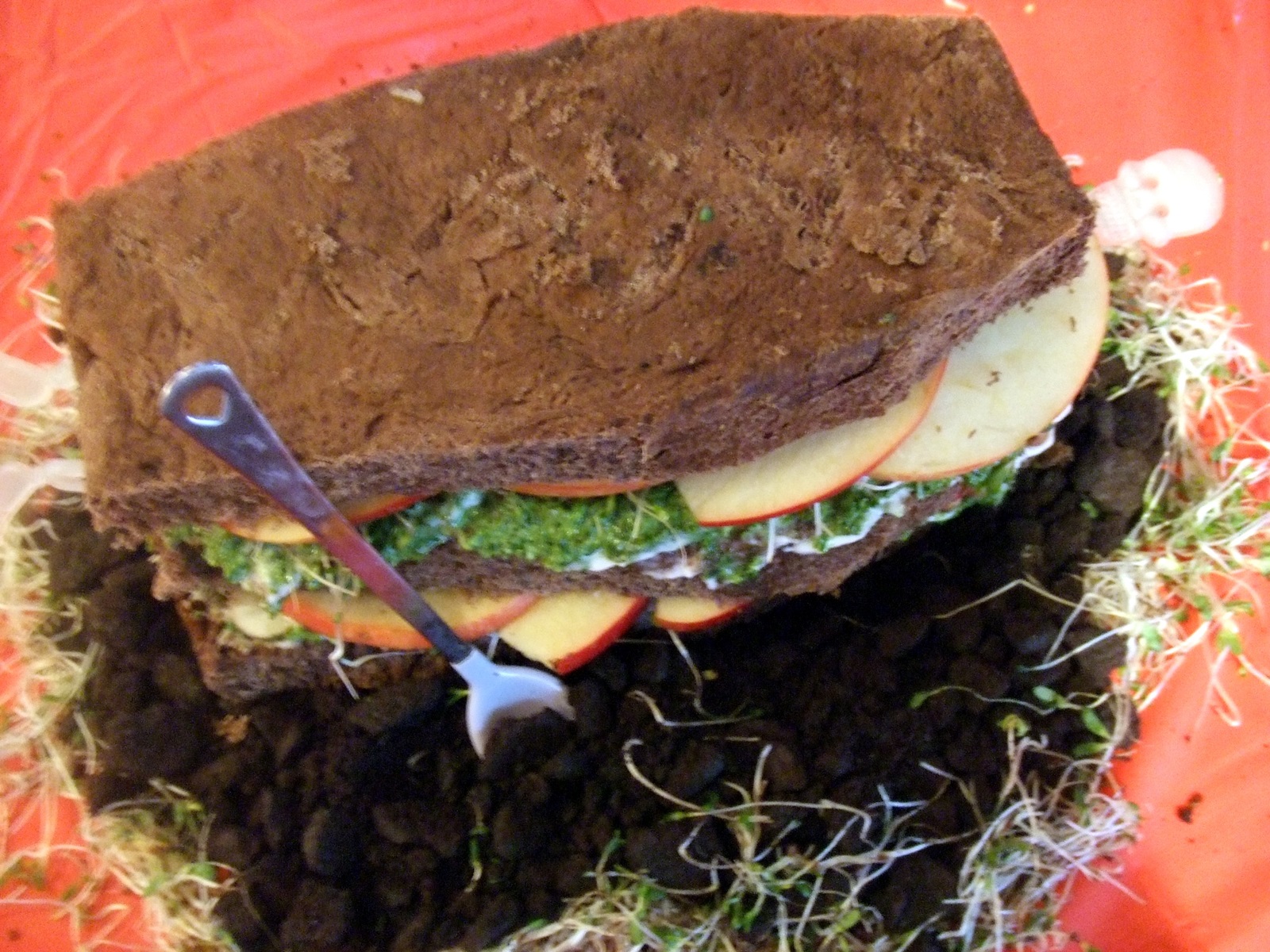 A Graveyard of Coffin Sandwiches

These sandwiches are not only delicious, but they look so macabre in a graveyard filled with dirt that you can also eat for dessert. This recipe makes 4 large sandwiches. You can also make them smaller and use coffin-shaped cookie cutters to cut the bread. Cut 8 slices of pumpernickel or other really dark bread into coffin shapes. On 4 of the slices, spread some vegan mayo and 1 Tbs. pesto. Sprinkle a few toasted almond slivers on top of the pesto. Add a few Alfalfa sprouts and a layer of sliced apples. Cover with the other 4 slices of coffin-shaped bread. I like to add a small plastic skeleton in my sandwiches because an empty coffin isn’t any fun. Just tell people to exhume the skeleton before eating.

To make the graveyard: add a layer of Alfalfa sprouts onto a platter. This will be the grass. Crumble a bunch of vegan chocolate cookies and place them on the Alfalfa sprouts. This is the dirt of the graveyard. Arrange the coffin sandwiches on top of the dirt. Stick a small spoon in the dirt to act as a shovel. Your guests will really dig this dish! 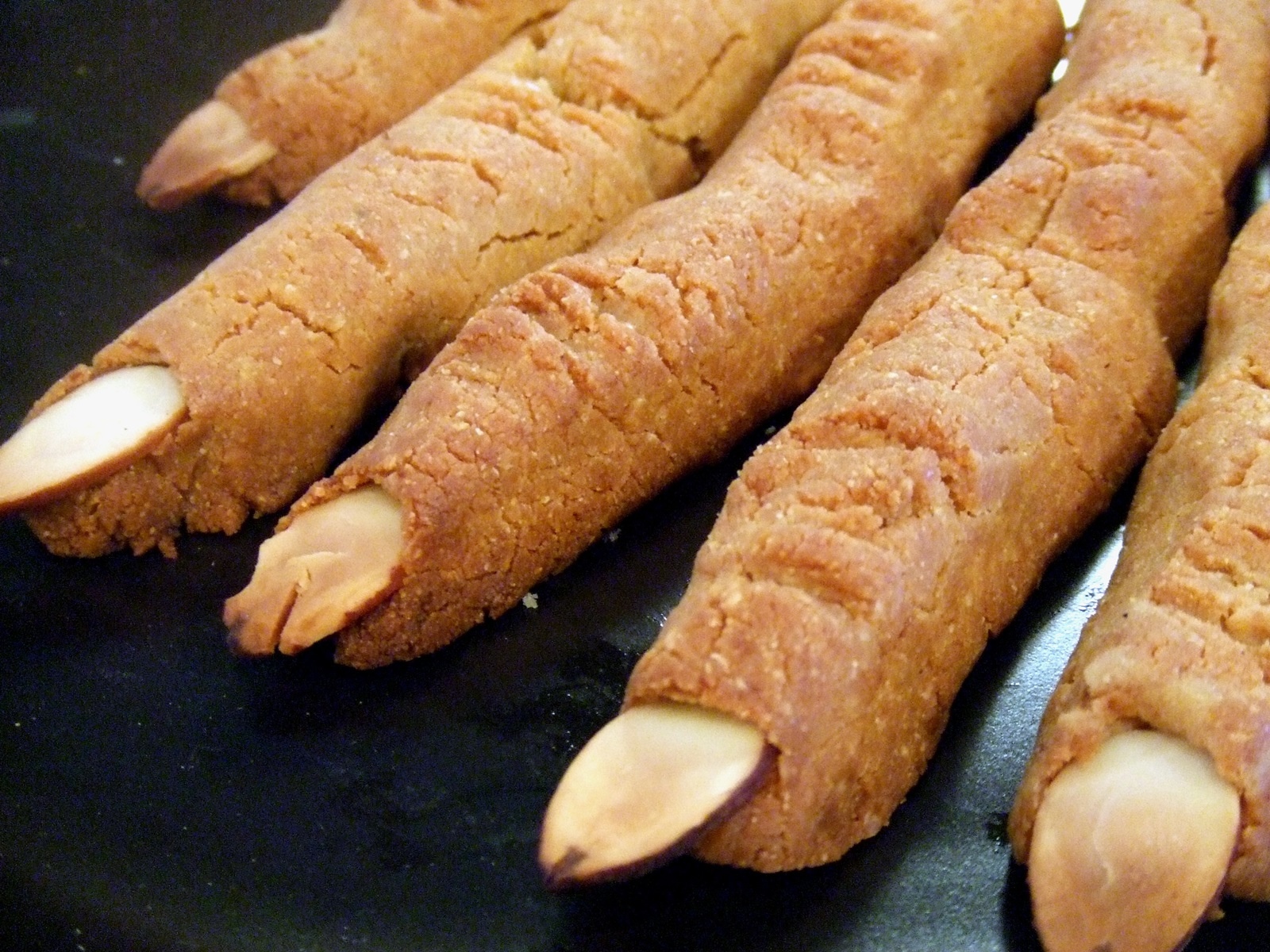 These Cheesy Witch Fingers may look really scary, but don’t worry, they are also really yummy. They are just cheese crackers with a chilling “handmade” touch. Combine 1 ½ cups flour, 1 ½ tsp. baking powder, 1 tsp. paprika, ½ tsp. salt and ½ tsp. cayenne pepper in a food processor. Pulse a few times to mix everything together. Add 1 cup room-temperature vegan butter and 1 cup vegan cheddar cheese shreds and process until everything is well-combined. Sprinkle some flour on a work surface. Remove the mixture from the food processor and shape into a tube. Divide the tube into 2-inch pieces. If you want to make witch toes, make 1-inch pieces. Roll each piece into a thin tube, pinching the tube slightly in the middle to make it look like a finger. Look at your own fingers for a guide but pretend you are a hundred years old – no smooth skin here. Using a toothpick or a fork tine, draw on knuckle lines. On the end of each tube, add a raw, skinless almond slice, pointy side up so that it looks like a fingernail. Arrange the fingers on a baking sheet, sprinkle with kosher salt and black pepper and bake at 350 degrees for 20 minutes or until they start to turn golden brown. Remove from the oven and let cool. Be careful when you’re eating these – keep track of whose fingers you’re chewing on.

Turn a dish of spaghetti and meatballs or sausages into mysterious mummified munchies. Cook fettuccine or other wide noodles in a large pot of salted boiling water until al dente. Drain and set aside. Cut bamboo skewers in half so they are about 6-inches long. Spear a vegan Italian sausage or a few Lentil Meatballs onto the skewer, leaving at least 2 inches for a handle. Cover the sausage or meatballs with a thick layer of green pesto, and then wrap the fettuccine noodles around on a diagonal to make mummies. Let some of the green pesto show through for a decomposing effect. It will also act as glue so you can stick capers on for eyes. Have some blood-red marinara sauce handy for dipping and dripping.

Serve your victims…I mean, guests…orange and red soups with spider webs made out of vegan sour cream. For the soups, choose from orange Curried Pumpkin Soup or red Borscht. To make the spider web, mix 3 Tbs. vegan sour cream and 1 Tbs. non-dairy milk. Fill a plastic condiment bottle with the sour cream mixture and carefully squeeze an open circle onto the soup. Squeeze out another circle around the first circle and then another around the second circle. Continue until you have 4 circles. Use a toothpick to drag lines from the center out toward the edges to create a web design. Place a raisin or two on top of the web to look like spiders and flies. It will be the first time you will enjoy having a fly in your soup.

The people who contribute recipes to One Green Planet are a talented and enchanting group of cooks. Check out some of the wicked concoctions they brewed up in their vegan cauldrons.

Serve up these devilish and spine-chilling savory dishes at your next Halloween gathering and have a scary good time. Your guests will devour everything. Beware….I mean, enjoy and Happy Halloween.