10 New and Upcoming Vegan Restaurants of 2018 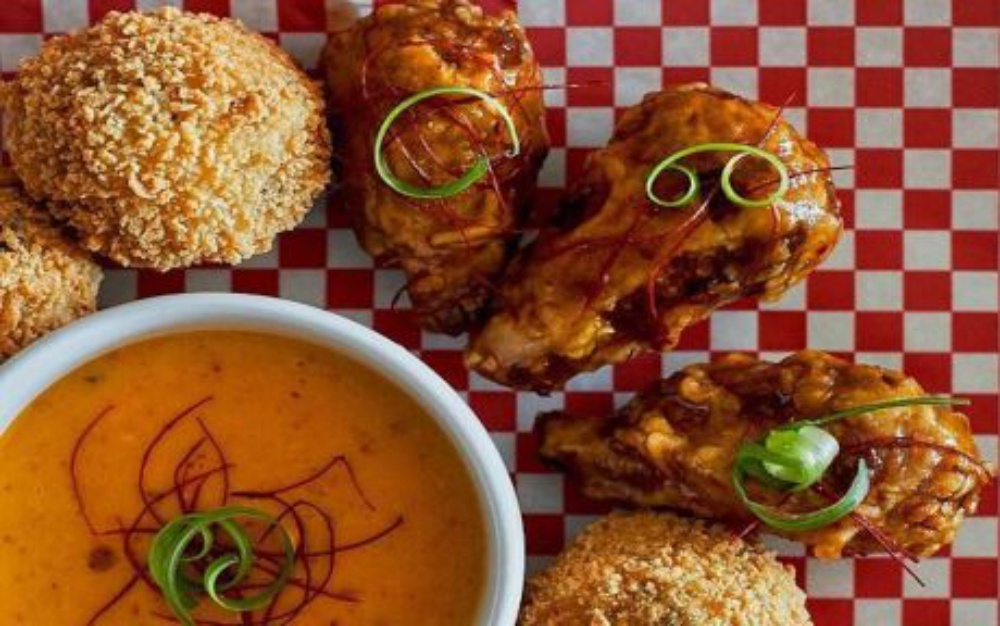 As plant-based diets continue to grow in popularity, due to their benefits on both an environmental and ethnical level, new vegan eateries keep popping up all over the country, and even the world! These restaurants give even the most stubborn skeptics a chance to experience just how rich, flavorful, and satisfying vegan food can be. Here are 10 new restaurants that have either opened already this year, or are set to open by the end of 2018.

This elegant restaurant, based in Washington D.C., is run by the married couple (and business partners-in-crime) Richard Landau and Kate Jacoby. It debuted in March 2018 and is another addition to the steadily growing list of other vegan restaurants operated by Landau and Jacoby (Vedge, V Street, and Wiz Kid). According to Washington City Paper reviewer Laura Hayes, some of the dishes “you shouldn’t skip on your first visit” include the Dan Dan Noodles with Five-Spice Mushrooms, Zucchini, and Red Chile-Sesame Sauce; the Peruvian Fries with Aji Amarillo, Cilantro, Dried Olive, and Peanut; and the Chocolate-Stuffed Beignets. Is your mouth watering yet? This restaurant’s menu shifts with the season, meaning that you can always expect a unique dish filled with fresh vegetables that are in their prime and ready to be savored. As Landau is quoted in a Washington Post article by Lavanya Ramanathan, “Vegetarian restaurants, he says, are “about limits. They’re restaurants that don’t serve meat. We want to be about what we do do.”

This vegan food cart, located in Portland, Oregon, opened in February 2018 and offers a tasty assortment of plant-based sandwiches and bowls. Some of the menu options include a Vegball Sub with garlic fennel “vegballs,” basil almond ricotta, and marinara sauce; and a bowl loaded with mushrooms, greens, white beans, cucumbers, radish, hemp seeds, quinoa, and a creamy avocado dressing. As one enthusiastic Yelp reviewer pointed out in their review, “Normally, I steer away from vegan options. These guys! These guys however have opened my mind (and stomach) up to a whole new world. With the introduction of THE OREGON GRINDER I was left wanting to try everything they had.” So next time you’re in the Pacific Northwest, drop by this food cart and experience the magic for yourself!

Dinger’s Deli is located at 4255 SE Belmont St, Portland, OR. Prices range from $9-$11 for the sandwiches and bowls.

A haven for vegan comfort food, Rip’s Malt Shop, located in Brooklyn, opened this month and is co-owned by Matt and Allison Robicelli, who used to own a well-known cupcake shop in New York. Their menu incorporates products such as the Beyond Burger patties and Field Roast sausages to create vegan versions of classics such as hamburgers and hot dogs with all the toppings. They also offer sandwiches (such as the Mushroom Melt), sides such as potato salad and tater-tots, and delectable sundaes/shakes made with non-dairy ice cream. In regards to their philosophy toward vegan dining, Allison states “There’s no judgement. There’s no people coming in and me lecturing you for 20 minutes about how we’re vegan. We wanted to make vegan food that everybody would want to eat.” And what could be better than that?

Set to opened September 8, 2018 in Miami, Florida, this vegan soul food restaurant was founded by Alex Cuevas, who gained recognition for establishing an all-vegan food hall in Miami called The VShops. Talk about a plant-based paradise! Southern Sol Garden BBQ boasts an impressive menu inspired by Cuevas’ own experience with vegan soul food in states such as Georgia, Louisiana, and Texas. Some of the delicious-looking offerings include BBQ Tempeh Ribs, Jalapeño Corn Bread, Baked Mac and Cheese, and Brown Sugar Baked Beans. Is your mouth watering yet? As VShops president Lori Zito states in a Miami New Times article, “Alex Cuevas has been vegan for over 30 years, and he has traveled all over the world seeking plant-based food options during his stays…Although the foods he experienced from different countries and regions were all inspiring in some way, none captured his heart like the great American South.” Next time you’re in Miami, take the time to check out this restaurant and indulge in these hearty meals that will satisfy both stomach and soul!

Todo Verde was first established as a catering company by Jocelyn Ramirez in 2015 in Los Angeles with the goal of making fresh and delicious vegan food inspired by her Mexican and South American heritage. As she so eloquently states in a VegNews article, “Veganism is a radical form of activism that disrupts capitalist systems and puts people back in control of keeping our communities healthy…Many food corporations focus their marketing efforts on low-income communities of color and feed us food that is making us sick. Veganism is a way to fight against that system and continue the ancestral food traditions that have been passed down for generations.” Now, having raised the $50,000 necessary to fund her project, Ramirez is in the process of officially opening Todo Verde later this year as a restaurant in East Los Angeles. The menu will include such offerings as vegan ceviche made with hearts of palm instead of fish, and a mock seafood coctel (cocktail) with oyster mushrooms. According to their website, the team at Todo Verde is “committed to advancing food equity in our neighborhoods, and are doing this by providing a variety of affordable plant based food options.” Keep your eyes and ears peeled for more details on the opening of this restaurant, as it is sure to be a success!

Opening later this year in Brooklyn, New York, Hartbreakers is the newest vegan restaurant created by the team behind Champs Diner and Screamer’s Pizzeria, two other plant-based establishments. According to a VegNews article, “the eatery has been testing dishes such as cauliflower tater tots, chicken sandwiches made with seitan, salad bowls, and a varied selection of burgers.” The pictures on Hartbreakers’ Instagram account offer a delectable sneak-peak into what the restaurant will be offering once its opening date is solidified. Burgers piled high with toppings, colorful salads, delicious dressings–everything your taste buds could possibly desire. We can’t wait!

This San Antonio-based food truck opened in July 2018 and serves up a mixture of Panamanian-inspired dishes (think tostones, for example, or fried plantains) and other comfort food classics such as mac and cheese and sandwiches. Akeem and Tara Best came up with the concept for this business (which originally started as a catering company) after watching the documentary What The Health, and launching a family journey into veganism. Akeem states in an interview that “Some of the obstacles we aim to address is that vegan foods can be tasty, affordable and convenient…Some vegan companies cater to vegans. We want to cater to the conversion market and open up peoples’ eyes.” In addition to the sandwiches, sliders, fried plantains, rice and beans, and other savory dishes, Go Vegan San Antonio also offers a fresh assortment of smoothies and shakes. Some examples include The Chocolate Love Affair (think dark chocolate chips, bananas, and almond butter) and The Berry Peach Cobbler (three types of fruit, graham crackers, and cinnamon). Next time you’re in Texas, take a minute to check out this food truck and all that it has to offer!

This vegan “butcher shop” opened in San Antonio, Texas, in June 2018, and offers up a variety of plant-based meats, as well as a delectable array of other dishes. It was created by Leah Drones and Javier Balderas “out of a desire to help people transition to veganism by creating comfort-food options with a vegan twist.” In addition to vegan meats such as glazed ham and vegan burger patties, Hip Peas Vegan Eats serves comfort food dishes such as po’boys with vegan shrimp, sushi burritos, gumbo, mac and cheese, and red beans with rice. Since opening, it has been a challenge to keep up with the demand in the San Antonio area, just proving that vegan food is become more and more popular!

This restaurant opened in late March 2018 in Red Hook, New York, and is the first 100% vegan burger bar in the Hudson Valley area. Co-owner Bobbi Jo Forte explained in a VegNews article that “WildFlower Café was created as a result of three friends who love food and who also love animals…We wanted to take on the challenge of defying what a ‘burger’ should look like and taste like, so we set out to create the ultimate vegan burger.” In addition to a build-your-own burger bar, they offer up a variety of other goodies such as a Fishless Fillet Sandwich, thick and creamy dairy-free milkshakes, and vegan bratwurst sausages loaded with different toppings. There is even a kid-friendly menu, and an option to order online and pick up your food for take-out at the restaurant. Next time you’re craving fast food with a healthier twist, check out the WildFlower Café and treat your taste buds to something spectacular!

With a name that translates to “give it to me” in Spanish, this cafe is set to open this winter in Detroit, Michigan, and will be run by Rocky Coronado, who is currently the owner of a food truck called Rocky’s Road Brew. As Coronado explained in a VegNews article, “I just want something healthy. I try to promote a plant-based diet because heart disease, cancer, diabetes are rampant in the Latin American community and communities of color.” His restaurant will likely expand on the menu from his food truck, which offers a variety of vegan tacos stuffed with plant-based meats, black beans, fresh veggies, homemade salsa, fried avocado, and more! They also sell coffee, tea, and fruit smoothies, as well as doughnuts made with blueberry and sweet potatoes. Stay tuned for more details, especially if you live in the Detroit area. And until this restaurant makes its debut, check out Coronado’s food truck!

For more spectacular restaurant suggestions, check out 10 Mouthwatering Vegan Soul Food Restaurants Across The Country! Or read up on 15 Meat-Heavy Restaurants That Changed Their Menus To Fully Plant-Based!

In addition, for recipe ideas, don’t forget to download the Food Monster App, which is available for Android and iPhone, and can also be found on Instagram and Facebook. The app has more than 10,000 plant-based recipes, and subscribers gain access to new ones every day. Check it out!