Classic Italian Pasta Dishes You Can Make in One Pot 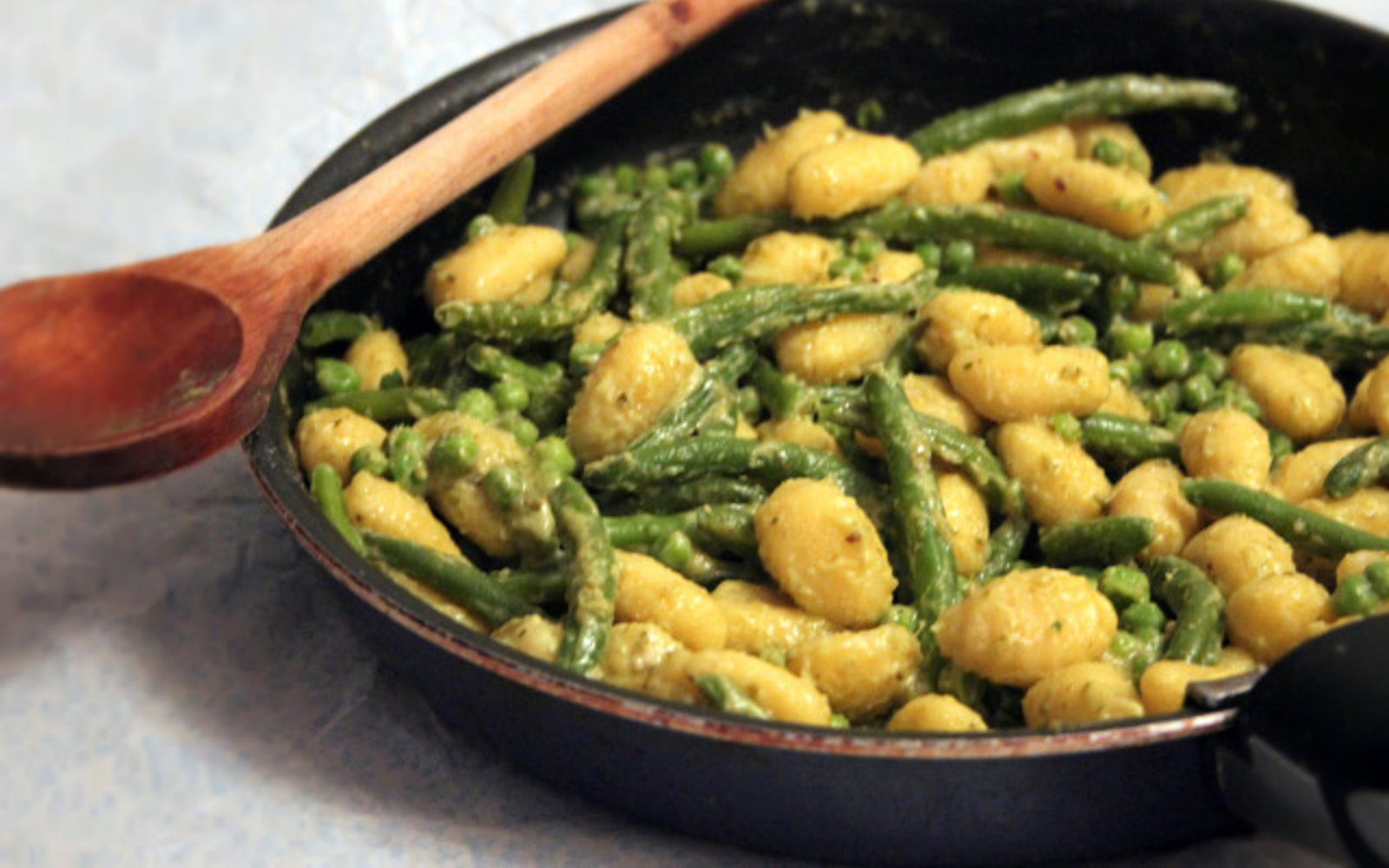 You may have noticed that lately, one-pot pasta recipes have been growing in popularity — and pasta, in any form, is a trend that we can get on board with. Many of us have long, busy days, and we just can’t find the time to put a lot of effort at night into a single meal and the cleanup. Additionally, one-pot pastas are a good option for those who live with chronic fatigue or pain; and if you simply find yourself low on spoons, a one-pot dish makes the cleaning process easy. If you’re cooking for just yourself, then you can plan it so that you have leftovers for a few days.

Pasta is not only one of the most filling ingredients you can buy, but it’s also affordable (even when buying gluten-free or grain-free) and easy to cook. Pasta can also provide a healthy serving of grains, provided you choose whole wheat or other whole grain options such as spelt, kamut, or brown rice rather than enriched white pasta. One ounce of whole grain pasta counts as a single serving toward your recommended daily allowance (RDA) of grains.

The current popularity of one-pot pastas got us thinking: which classic Italian pasta dishes use only one pot? It turns out, there are a few options that are either plant-based or easily made plant-based — and because most of these were originally peasant dishes, you don’t need to go out of your way to hunt down expensive ingredients. 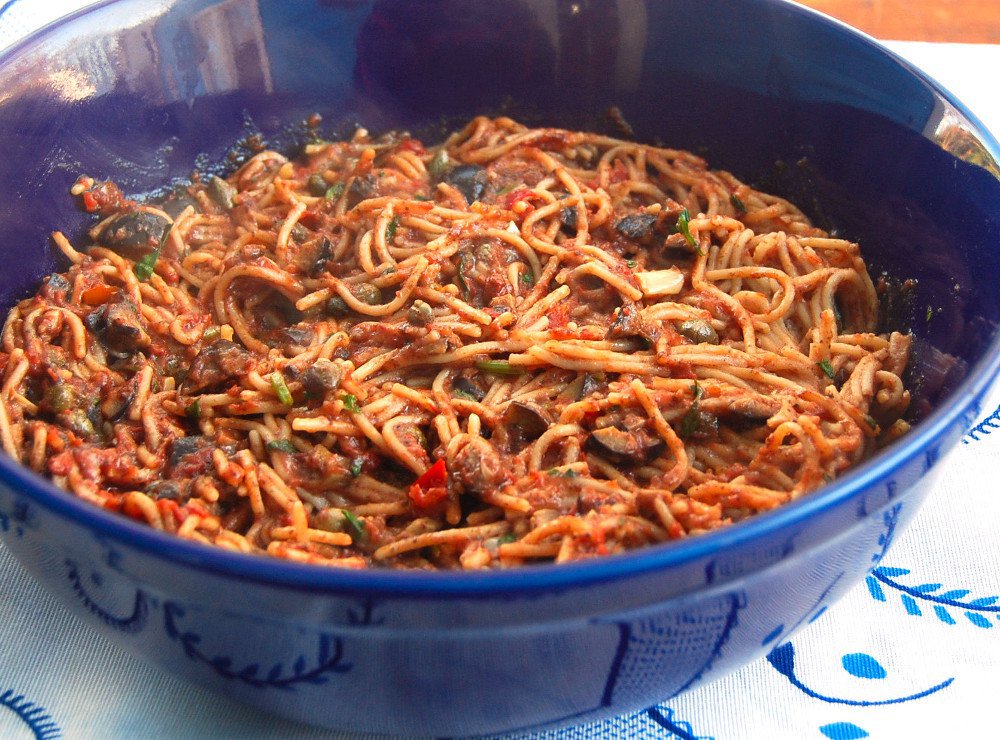 Spaghetti alla puttanesca is a popular Napoli pasta dish with a scandalous name that emerged in the 1960s. Literally translated, the name means “prostitute’s spaghetti,” and it is said that the dish was invented by sex workers of past centuries, who made the dish because it was cheap, filling, and easy to put together. However, food historian Jeremy Parzen points out that this history is false and due to how “puttana” is used as a colloquial expletive in Italian, the name might refer to how spaghetti alla puttanesca is a mix of ingredients thrown together in a pot.

The classic version consists of spaghetti cooked with diced, garlic, capers, olives, crushed red pepper, and anchovies. It is hearty, sweet, salty, and spicy. To make it vegan, simply swap the anchovies out for something that tastes fishy. For example. this Pasta Puttanesca swaps the anchovies for shredded seaweed, but you might want to add ingredients like diced, sautéed mushrooms cooked in Old Bay seasoning and dulse flakes or use crumbled, packaged vegan fish. Jarred, marinated artichokes also make a good substitute. 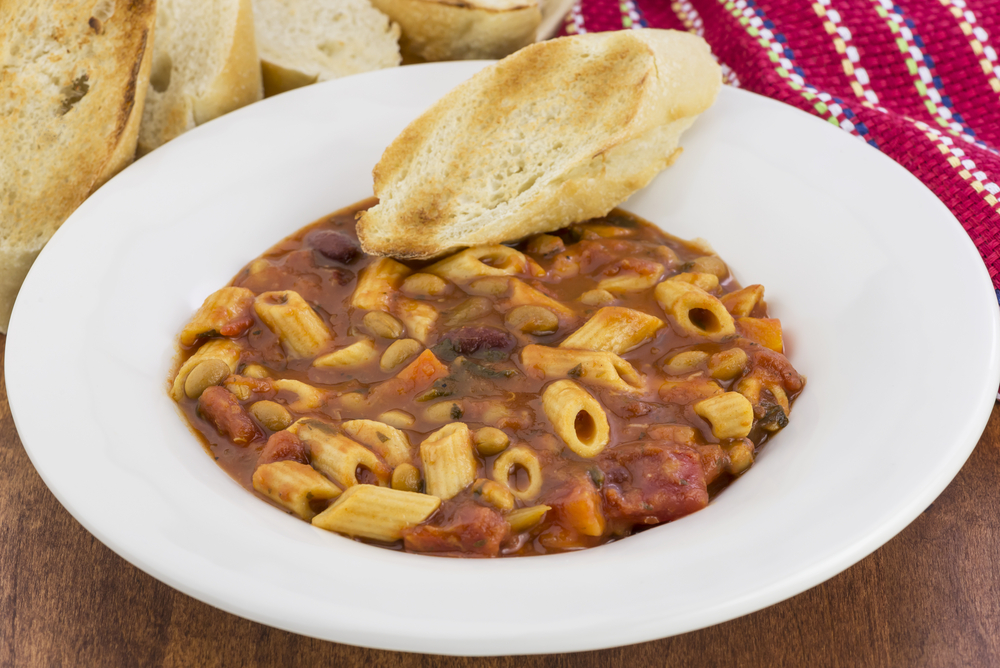 Pasta e fagioli, also known as “pasta fazool” or “pasta with beans” is a classic Italian peasant dish that originated in the countryside. It consists of pasta and beans in a broth-like sauce that is made from the starch left in the pasta cooking water. There are variations from region to region, but typically small pasta shapes like elbow macaroni or ditalini are paired with borlotti beans, cannellini beans, or Great Northern beans. Many U.S. versions use red beans. Flavors such as marjoram, sage, thyme, and parsley are a popular addition to pasta e fagioli. Recipes also typically include lard, which can be swapped for vegetable broth, or ham, which can be substituted for vegan ham slices.

In 7 Ways to Cook Beans to Make Them More Exciting, Rhea Parsons details how to make an entirely plant-based version of pasta e fagioli:

In a large stockpot, heat 1 tablespoon oil over medium heat. Saute 1 diced onion for about 4 minutes until softened. Add 3 thinly sliced scallions, 1 large diced carrot, 2 ribs of diced celery, and 2 cloves minced garlic to the pot. Let cook for 4 minutes until the vegetables soften. Mix in 1 teaspoon dried rosemary, and 1/2 teaspoon red pepper flakes. Stir in 6-8 cups vegetable broth and/or water and 2 cups chopped tomatoes. Bring the soup to a boil. Reduce the heat, cover and simmer for 10 minutes. Add 1 1/2 cups cooked pinto beans and 3 cups cooked fusilli or other small pasta. Season the soup with salt and black pepper to taste. Add 1 large bunch of chopped chard, kale or other greens to the pot. Do not stir. Cover the pot and let the greens steam until they are a verdant, bright green. Uncover the pot and stir in the greens. Serve while hot. Sprinkle with vegan grated Parmesan, if desired. 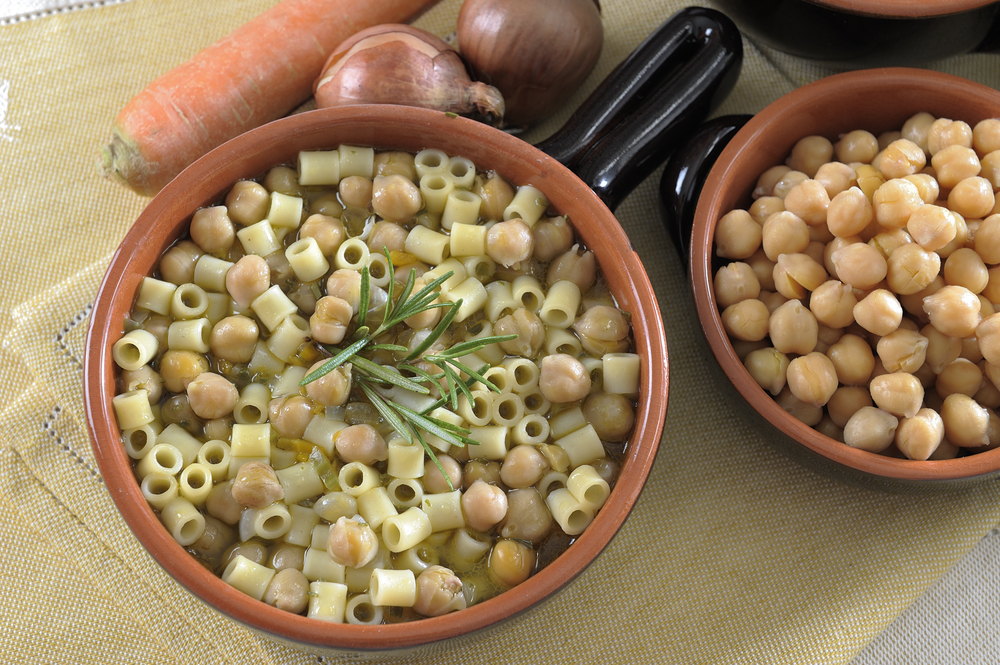 Pasta e ceci, or pasta with chickpeas, is a Roman peasant soup that is estimated to be at least 2,000 years old. This hearty dish consists of chickpeas cooked with a sofrito (a sauce base in many cuisines) of diced celery, garlic, and carrot and then combined with broken or small pasta (like ditalini). Like many peasant dishes, additions to pasta e ceci may vary. Some like to add diced tomatoes after the sofrito has been cooked, others might add anchovies (which can be swapped for sea vegetables) or pancetta (swap with vegan bacon or vegan ham slices), but all include pasta and chickpeas in a starchy broth.

To make pasta e ceci, you will need a stalk of celery, a stalk of carrot, an onion, a few garlic cloves (or according to your taste), a couple of sprigs of fresh rosemary, two 14-ounce cans of chickpeas, vegetable broth, enough ditalini or elbow macaroni for four servings, juice of half a lemon, salt and pepper to taste, and fresh parsley, for garnish. Use dry if you don’t have fresh. If you like tomatoes, you have the option of adding one 14-ounce can of diced tomatoes.

Start by adding the sofrito (diced celery, carrot, garlic, and onion) to a large stockpot with a drizzle of olive oil until translucent. If you want to make this oil-free, start by cooking the sofrito in the pot, then adding a splash of vegetable broth once the vegetables begin to stick. Be sure to scrape the bits of vegetables that stick to the bottom of the pan — they add to the flavor. Drain the canned chickpeas and reserve the aquafaba, if desired. Aquafaba can be used as a replacement for egg whites in vegan desserts, waffles, and more.

Add the chickpeas, fresh rosemary, and vegetable broth to the pot and bring to a boil. If using canned tomatoes, add these now. Cook for about 15-20 minutes. At this point, you have two options. You can either add the pasta now and cook until tender or until you’ve achieved your desired thickness for the broth or you can remove half the chickpeas, blend the remaining soup, and then return the chickpeas to the pot with the pasta.

The thickness of the broth is entirely up to you. Some prefer it to be on the soupier side while others like it thick and hearty, like a stew. 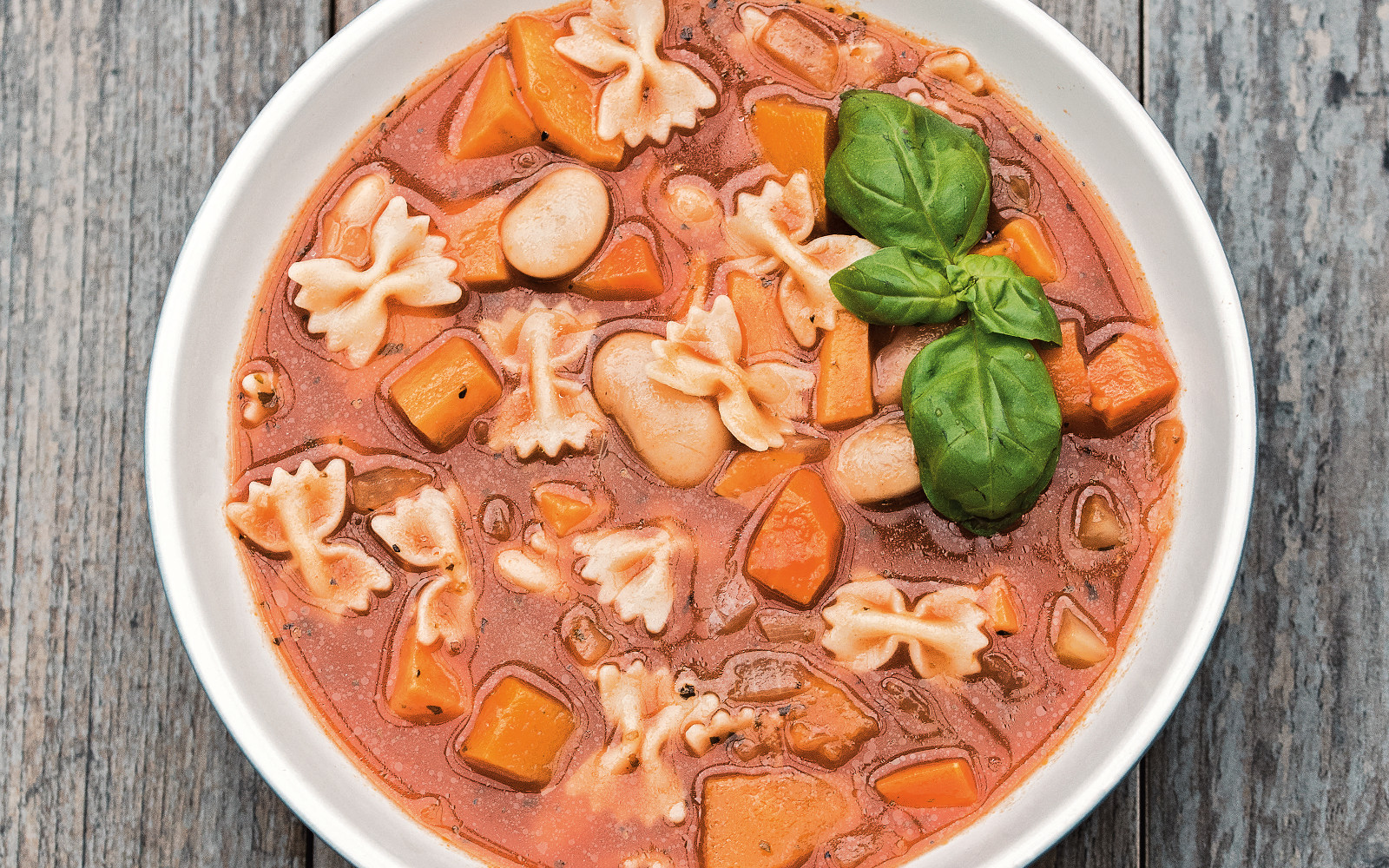 Minestrone predates the Roman Empire, when a soup made from a mixture of vegetables, grains, and beans was a staple simply because it was the type of food that was available. Today, minestrone is still more or less the same; its composition can vary based on seasonal produce, beans, and grains or pasta shapes that are available. It was typically plant-based, simply because meat was not yet a staple food in the region and while many recipes today include meat, a good plant-based minestrone is a fine recipe to have on rotation in any household. Like pasta e ceci, minestrone can be either soupy or thick.

The Autumn Vegetable Minestrone above features sweet potato, pumpkin, cannellini beans, and bowtie pasta cooked in a thin broth. This Hearty Minestrone uses red and white beans, cabbage, sherry, and elbow macaroni and this 15-Minute Minestrone features seasonal vegetables, peas instead of beans, and spaghetti. There are a lot of ways that you can make a minestrone recipe that’s uniquely yours, so have fun experimenting with different vegetables!

For even more one-pot dinners, try this One-Pot Spinach and Mushroom Pasta for dinner. Then, learn about 5 Dinners You Can Make Using Just One Pot and read 11 Easy One-Pan Meals That Make Late-Night Cooking a Breeze.