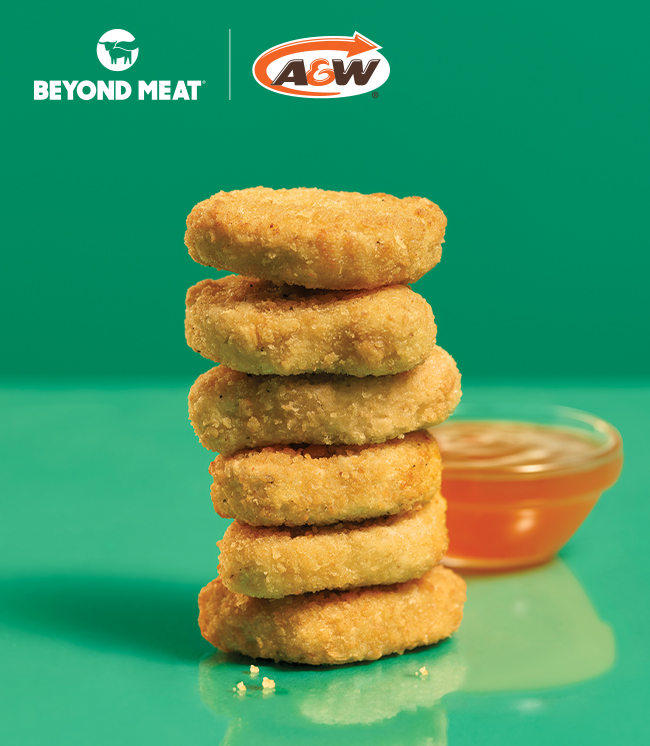 Beyond Meat, a Californian-based brand of plant-based meats just recently launched their chicken nuggets. They will be available at fast-food chain restaurant A&W across Canada’s 1,000 locations.

These plant-based chicken nuggets will be available on the kid’s menu with a selection of vegan-friendly dipping sauces.

Tom Newitt, Vice President of Marketing at A&W Canada, said, “We have been on a search for the best, most delicious plant-based nugget and are excited for our guests to try our new Beyond Meat Nuggets. We think nugget lovers will be very impressed.”

This vegan nugget launch is just an expansion of Beyond Meat’s partnership with A&W Canada, which began in 2018. A&W Canada isn’t new to plant-based meats and has had amazing success with its vegan launches.

Beyond Meat chief growth officer Deanne Jurgens said that the demand for plant-based nuggets is higher than ever.

Prior to this summer, Beyond Meat was best known for its beef and pork items. Now with a chicken shortage and the greater demand for plant-based meats. They are starting to release even more vegan chicken options.

Beyond Meat has even worked with KFC to create a vegan fried chicken option. It was tested out in 2019 in a location in Atlanta and was sold out in five hours.

This just further states the already known fact that more and more people are seeking out plant-based alternatives.

Beyond Meat has made leaps and bounds in providing a vegan nugget that even meat-lovers would love. They pride themselves on making the best forms of plant-based protein with natural and healthy ingredients.

The partnership between Beyond Meat and A&W Canada is looking to be a profitable and long-term relationship. And we can expect to see even more vegan chicken products coming from Beyond Meat in the years to come.

Make your own vegan nuggets at home:

If you want to read more about Beyond Meat and its products. Here are other sources to keep you up to date on the newest releases and locations.