Palm oil is a highly valued commodity, and can be found in approximately 50 percent of all consumer products, ranging from pet food to cleaning fluids and processed goods like cookies and snack bars. At first glance, it may seem like an amazing, convenient product … but this obscures the grim reality of how it is produced.

Around 90 percent of the world’s palm oil comes from just two countries: Indonesia and Malaysia. Rampant deforestation in these countries, driven by the palm oil industry’s ever-growing requirement for land, has had a devastating impact on the people and wildlife of these nations. The Leuser Ecosystem, located on the Indonesian island of Sumatra, has been particularly hard hit by this demand. Scientists have established that the Leuser Ecosystem is one of the most ancient, biodiverse ecosystems known on this planet, and is also the last known location where orangutans, sun bears, rhinos, elephants, and tigers still roam side by side. Lindsey Allen, executive director of the Rainforest Action Network (RAN), has described it as “one of those almost mythic natural wonders that defies the imagination with its diversity and abundance of life.”

Sadly, up to 300 football fields’ worth of forest are cleared every single hour to make way for palm oil plantations. One of the many species being pushed toward extinction because of this is the pygmy elephant (also known as the Sumatran elephant). They are often caught in traps or poisoned by plantation workers: seen as nothing more than a nuisance and an impediment to palm oil companies’ ultimate goal of profit.

The result of this has been a steady decline in the elephants’ numbers. The World Wildlife Fund–Indonesia estimates that over 100 pygmy/Sumatran elephants were killed just in the Riau province of Sumatra between 2004 to 2014. Around 1,300 of them remain in the wild, while the International Union for the Conservation of Nature (IUCN) lists them as “critically endangered.”

Environmental photojournalist Paul Hilton – whose work involves documenting the ongoing desecration of the Leuser Ecosystem – recently published a photograph to his Instagram page that reveals just how tragic this situation truly is.

A more heartrending sight than this dead elephant – killed for the crime of daring to exist on a piece of land coveted by the palm oil industry – could scarcely be envisaged. 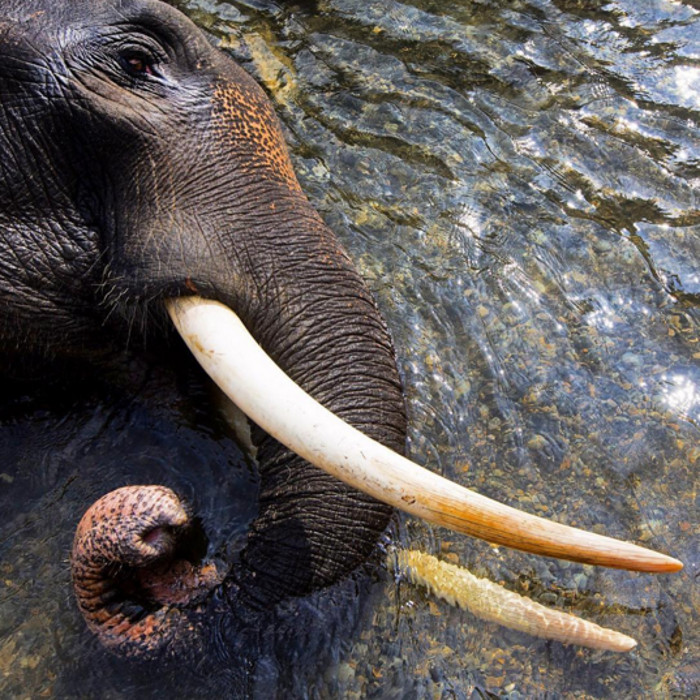 Sharing the passionate words of an advocacy group called Unite For the Orangutan, Hilton said, “Elephants are poisoned in palm oil plantations in Sumatra and Borneo. When their rainforest home is destroyed for palm oil, these animals fall prey to starvation, poisoning, and death. They’re often run over by bulldozers, blasted with fire crackers which are concealed in palm fruit, burnt alive, or shot to death. Palm oil is a major ingredient in processed foods and cosmetics and soaps.”

The only effective way for us to start bringing an end to this horrifically cruel practice – and ensure that the elephants, orangutans and other animals of Indonesia’s beleaguered rainforests are given the opportunity to recover – is to cut palm oil out of our lives.

For more information on how you can go about doing that – and why you should – read the articles below.