The Living Nightmare Experienced by Monkeys in the Research Industry 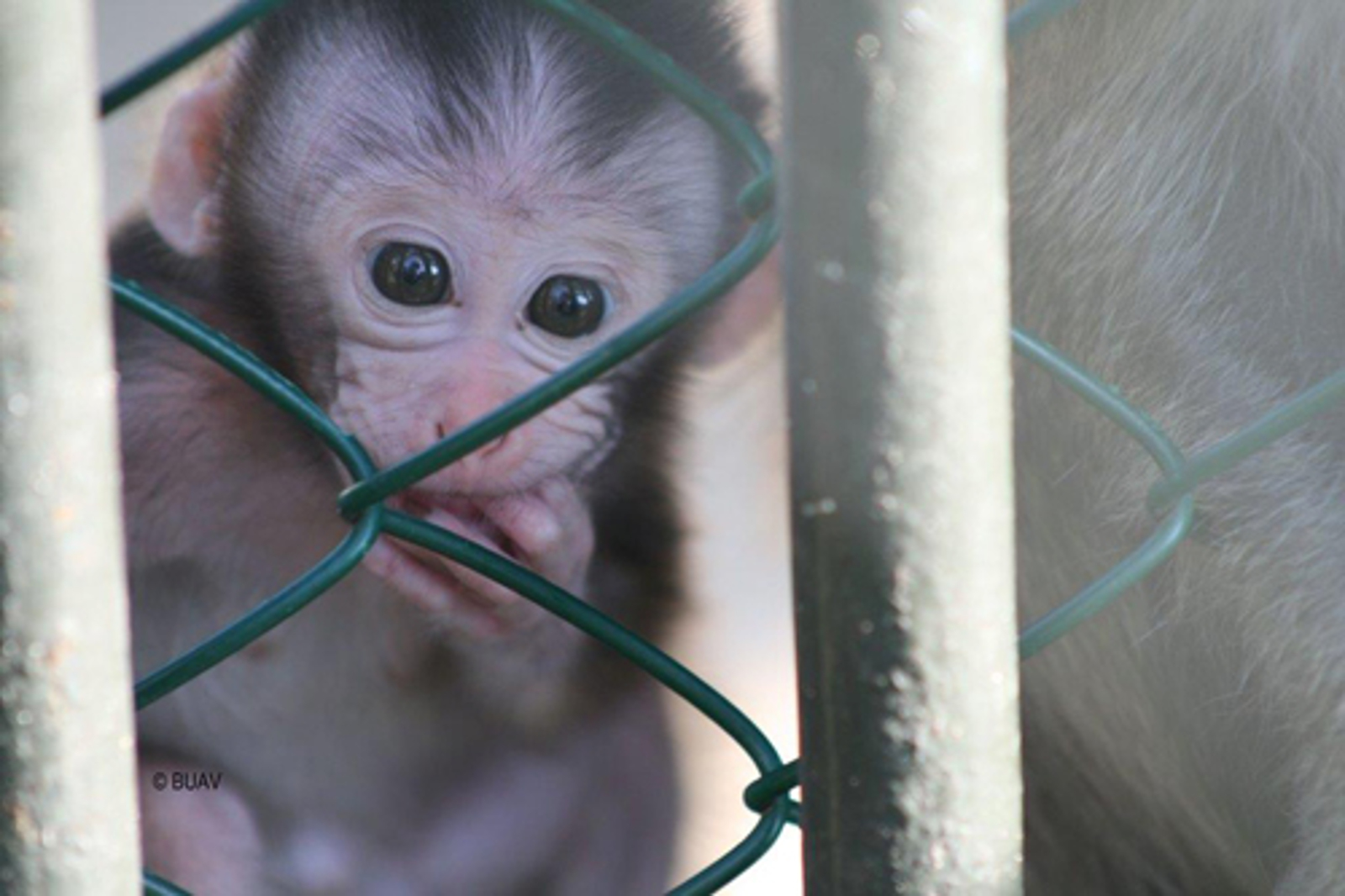 The BUAV recently carried out an investigation in collaboration with Soko-Tierschutz that sent shockwaves across Europe. The exposé illustrated the reality of the harrowing suffering of primates inside a leading EU laboratory. The monkeys kept in this laboratory were being experimented on for research into how the brain processes, categorizes and memorizes visual information, including facial recognition and color processing. Other experiments included anatomical analysis of the brain; examination of auditory processing, and of brain neurochemicals and metabolites; and investigations of motor control. Some of the experiments even studied changes in the brain from damage to the eyes and brain.

Our investigation found incredibly cruel conditions at the lab and raise important ethical, scientific and legal issues which need to be addressed as a matter of urgency.

The following monkeys have different life stories but share one unfortunate fate; they have all experienced the horrors of life – and for some death – inside the Max Planck Institute for Biological Cybernetics in Tübingen, Germany (MPI). Both rhesus macaques and long-tailed macaques were used at the MPI; their lives brutally controlled and manipulated. Some of the rhesus macaques were used in research for years and were given a name in addition to an ID number. The long-tailed macaques, who were used in research lasting weeks or months before being killed, were only allocated a number.

These monkeys never knew what it is like to enjoy their natural habitat, embrace freedom, or live life as a wild animal, which is their right. Instead they have experienced a living nightmare at the hands of the research industry.

Stella, a rhesus macaque, born in January 2008, arrived at the MPI in 2011.  Born in a primate breeding centre in Austria, she was later transferred to France before being sold to the Institute.

Stella had a larger chamber implanted into her skull which became infected. In October 2013, she suffered lameness on one side of her body and had difficulty moving. Her condition deteriorated and she spent most of her time immobile, staying in one side of her cage, unable or unwilling to move.

Stella was used for one last experiment during which she was euthanized.  For Stella, life was spent in a laboratory, filled with unimaginable pain and suffering all in the name of research. 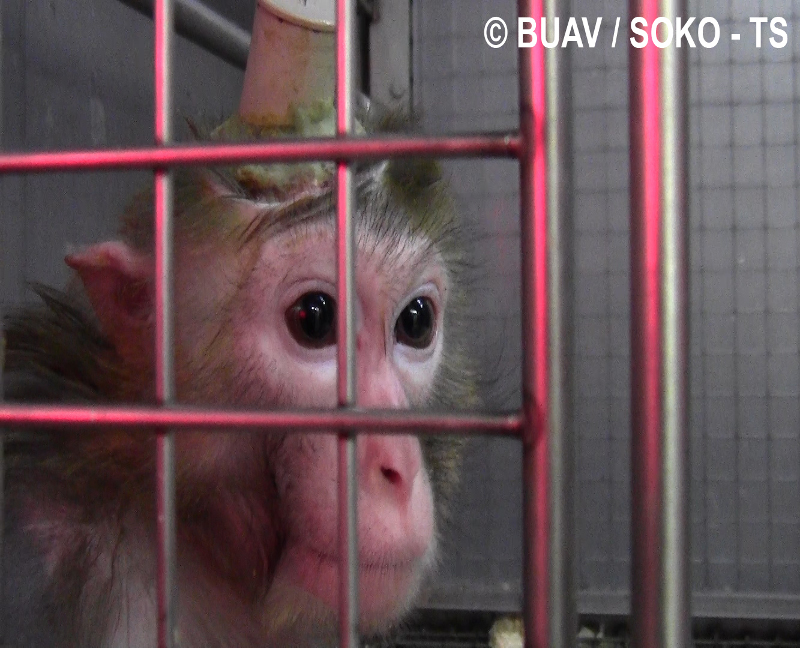 Lumpi was one of the longest surviving rhesus macaques at the MPI, having spent seven years in the laboratory.  Arriving at just three years old, Lumpi was originally housed in a group, but during our investigation he was housed alone, deprived of social interaction and engagement. He displayed stereotypic behaviour including circling and pacing inside his metal cage; an attempt at coping with extreme stress caused by a lack of social contact and inability to express normal behaviour.

At the time of our investigation, Lumpi, who had a head post surgically implanted into his skull, was used in “training” sessions. A head post is used to fix the animal’s head in place during testing. Their heads are completely immobilized by a rigid pole that secures to the post. A “head chamber” is fitted in a similar manner, although this time the skull is completely drilled through to create allow a “window” to be left so that electrodes can be inserted into the chamber and directly into the brain during experiments. The terms used for the actions carried out against the will of these monkeys sound as if they were in some way “voluntary,” they are as innocuous as “sitting” in a chair or, as with Lumpi, “training.” This, however, is hardly the case.

Lumpi was kept in a dark test chamber, immobilized by a head holder fixated to his head post to keep his head straight and eyes locked onto the screen in front of him. His hands were the only part of his body he had the freedom to move, but was only able to use them to push or release a lever in response to recognizing a pattern on the screen ahead of him for which he received a few drops of fruit juice.

Lumpi was deprived of water for long periods while being “trained.” He was then kept thirsty to keep him “motivated” to carry out the tasks. The sessions could last for up to five hours a day, five days a week. 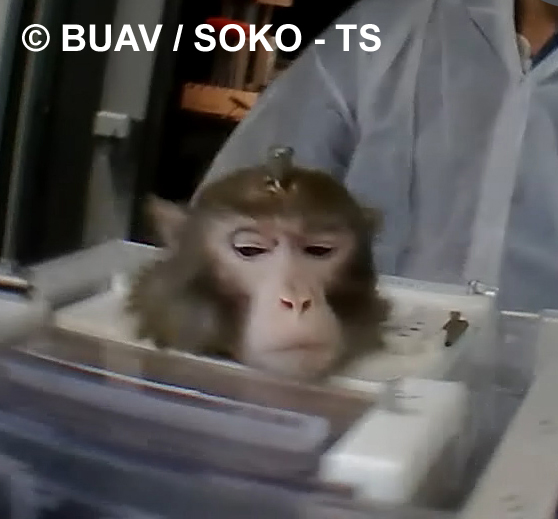 Boateng, a rhesus macaque, had been at the MPI since January 2012. During the time of the investigation he was subjected to physical coercion to “acclimatize” him to the primate “chair.” Although it is called a chair, this device is more like a full body box that is secured in a manner that has the monkey’s head sticking out on the top.

Boateng had to endure a brutal regime involving severe water deprivation (sometimes lasting days) and physical restraint. This disturbing “training” involved being sedated and left to recover in a cylindrical restraint, a cruel device created at the facility in an attempt to accustom the monkeys to being held in the primate “chairs.” With his head severely restrained by a neck clamp, Boateng awoke to find himself in the tube. Highly stressed, he span frantically in an attempt to free himself from the device but to no avail.

This is CM28, a long-tailed macaque. He was born in June 2008, in one of the breeding farms in Mauritius and taken away from his mother at only 12 months. At two years of age he was exported to France alongside fifty other long-tailed macaques destined for use in research.

After almost two years at a supply facility in France, he reached what was to be his final destination, the MPI, in September 2013. Three months later he died.

In the three short months CM28 was at MPI he experienced unimaginable suffering. He had a head chamber surgically implanted into his skull a month after his arrival, which resulted in bleeding head wounds. Only nine days later, the wound became infected with a MRSA infection. Clearly agitated by the foreign object implanted into his head he would often pick at the incision site obviously in great discomfort. After being used in one last experiment, he was euthanized. He was only five years old. 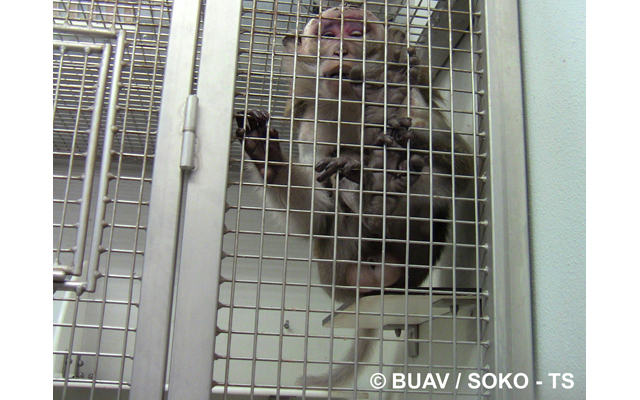 Another long-tailed macaque, CM26, had a similar fate. He was born in Mauritius in July 2008 and separated from his mother at less than one year of age. He arrived at the MPI in September 2013. His time at the institute was short lived. He survived for only one month before being killed, deemed unsuitable for the research because he did not respond well to anesthesia. He also suffered a cardiac arrest. He was only five years old when he was killed on November 28th and his body dissected. 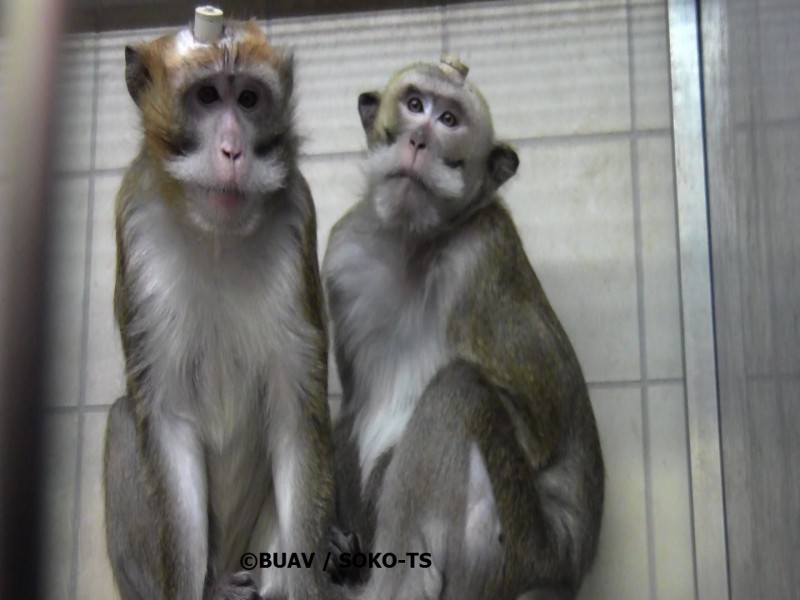 We know that you, like the BUAV, do not want these animals’ suffering or their lives to have been in vain. That is why we need you to help us today to take action and stop this cruelty. Visit our website to watch our investigation film and find out more about the many ways you can take action!