Shazam, the Stunning Black Leopard Finally Enjoys His Freedom at The Wildcat Sanctuary 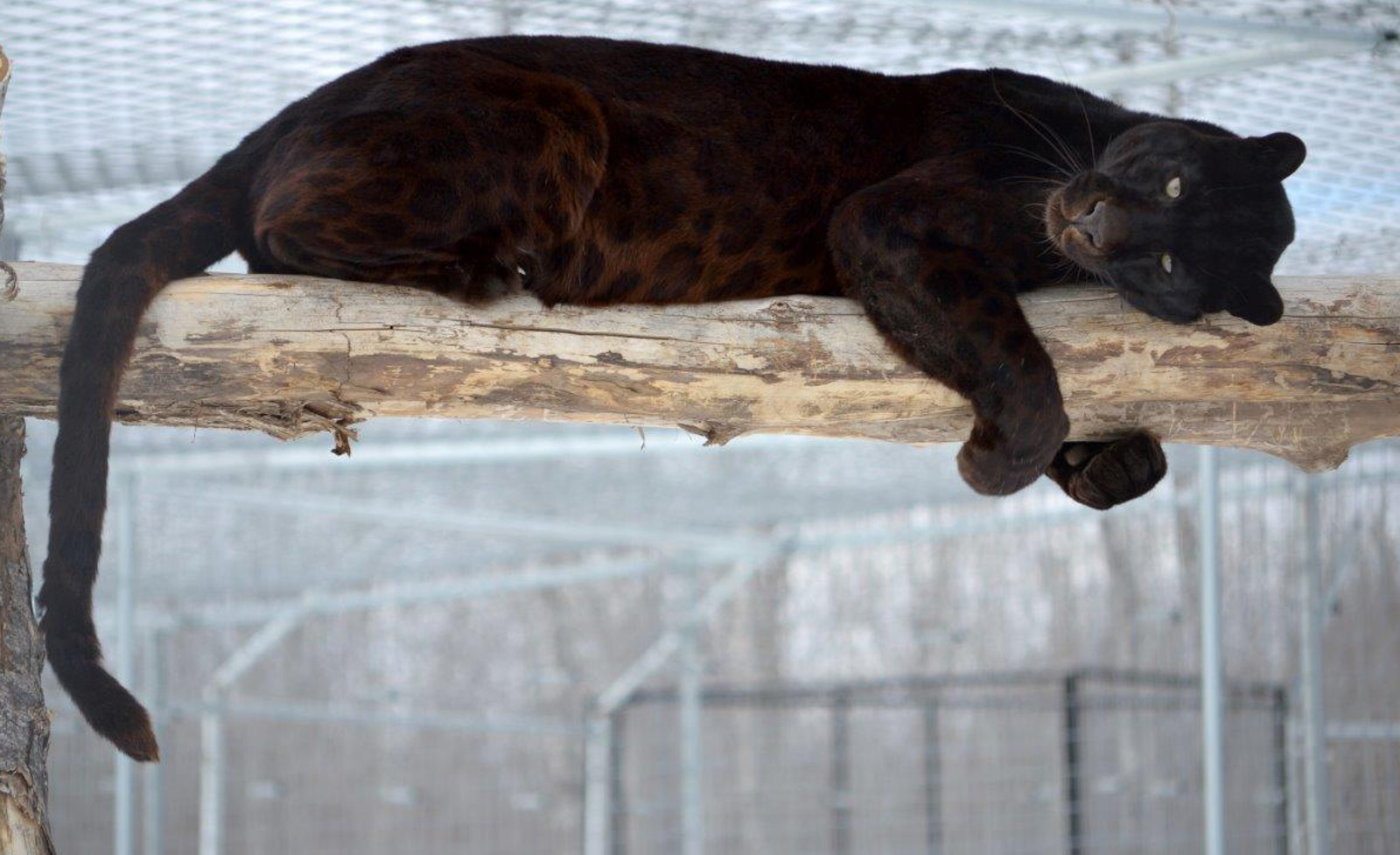 When the Catskill Game Farm closed its doors for business in 2006, it rang a number of alarm bells for animal welfare organizations across the U.S. The Game Farm had been in operation since 1933 and was the first privately owned zoo in the country to receive approval from the Department of Agriculture. While the title may have been prestigious back then, over the years the conditions and quality of the zoo began to slip. Over 2,000 animals were kept on the 1,000-acre game farm. In the 1960s attendance at the farm ranked in the millions, but by 2006 visitors had dropped to a small fraction of that. When the facility was closed, the exotic animals who were kept at the zoo were sent to auction.

While one would hope that the potential buyers who attended this auction would be in some way licensed to care for the animals – or to at least have their best interests at heart, this was largely not the case. Taxidermist and unlicensed exotic animal dealers were the more likely candidates. Knowing this, representatives from The Wildcat Sanctuary (TWS) and many other animal welfare organizations and sanctuaries attended the auction in the hopes that they could save these animals from yet another experience in a defunct, roadside zoo, or worse, life in a canned hunting facility. Among the animals up for auction was a leopard, Shazam.

Julie Hanan, advocate volunteer for The Wildcat Sanctuary recounts, “The auction took place near the end of October. Going into our winter season, it was not the easiest time for us. We had recently relocated our entire sanctuary, moved all our animals, and we didn’t have any ‘extra’ empty habitats. But, we couldn’t say no, we had to do something.”

Shazam Comes to The Wildcat Sanctuary

Shazam was rescued by The Wildcat Sanctuary along with six other big cats. This stunning black leopard was only four years old when he came to the sanctuary. Given the sad conditions of his previous living arrangement, Shazam was reluctant to trust his caregivers at first. However, with a bit of encouragement and positive reinforcement, Shazam has grown into a confident adult leopard. 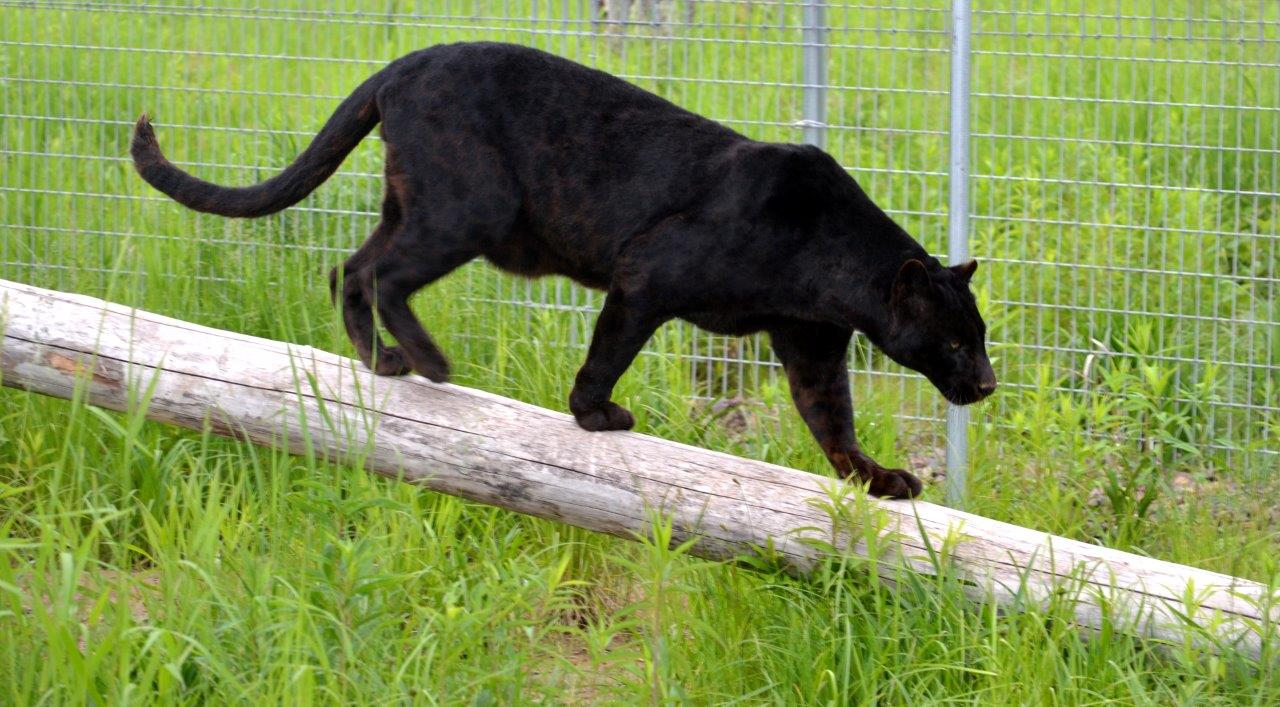 Shazam immediately bonded with Diablo Guapo a black jaguar who is also a resident in the sanctuary. The two love to play together through the walls of their enclosures. Hanan tells One Green Planet, “when we recently built a new habitat for Shazam, we were sure to do the same for Diablo Guapo so they could continue to be next door buddies.”

But as Hanan says, with these two, “good fences make good neighbors!” Diablo Guapo was originally named, simply “Diablo,” however, after getting to know him the staff at TWS added on guapo to mean Handsome Devil – a name much more fitted to his personality. Diablo Guapo is much older and larger in size than Shazam is, but he was declawed by his original owners which makes him a bit defenseless against his younger, much more energetic counterpart. Hanan describes Shazam as “fast and dangerous.” Which in the grand scheme of things is precisely what a black leopard of his age should be! 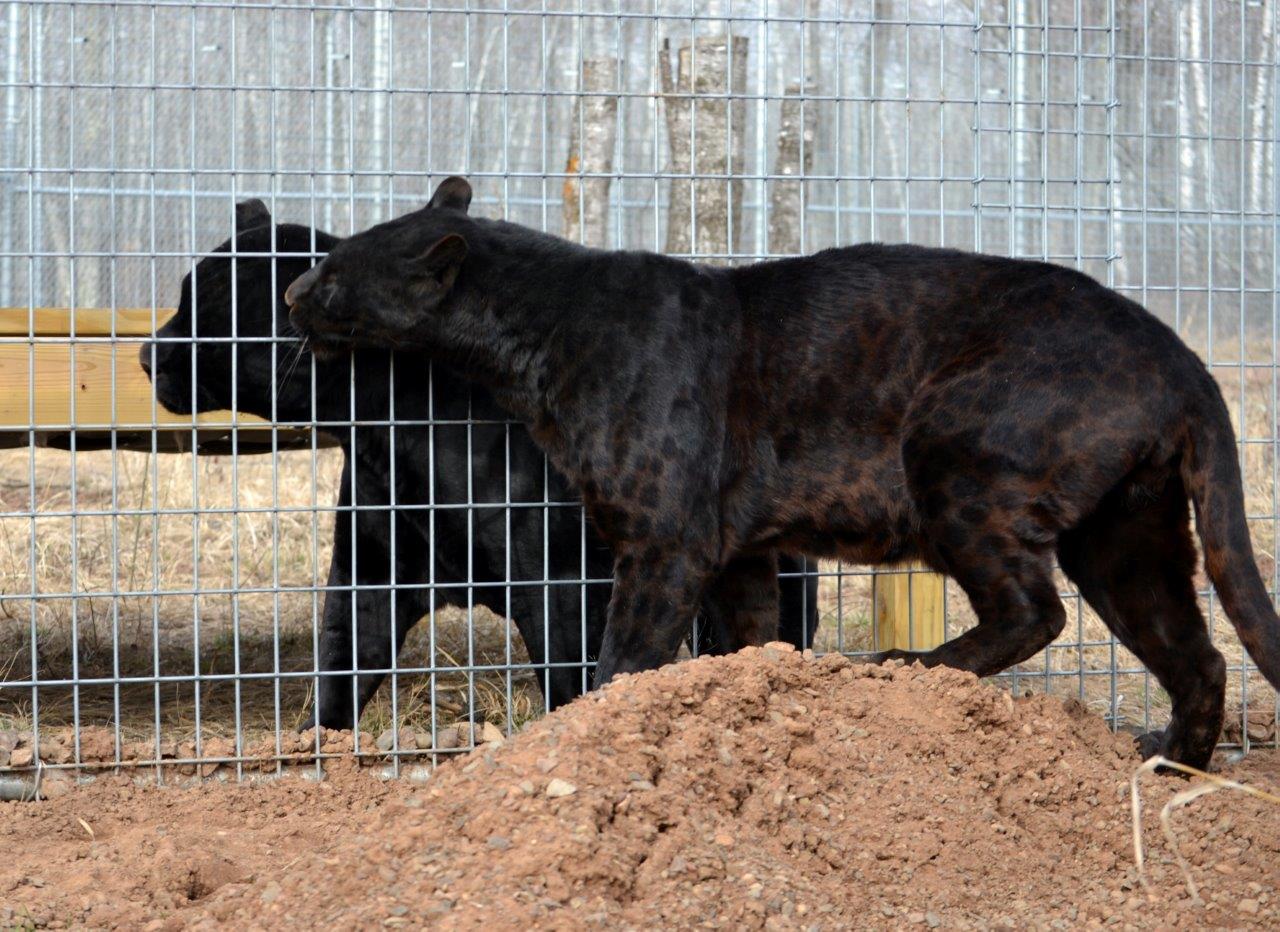 Although he has lived most of his life in captivity, Shazam maintains the natural behaviors of a wild leopard. His enclosure at TWS is fully outfitted with high-perches and a climbing log jungle gym. At any given time, Shazam can be spotted draped over a perch evaluating his territory. 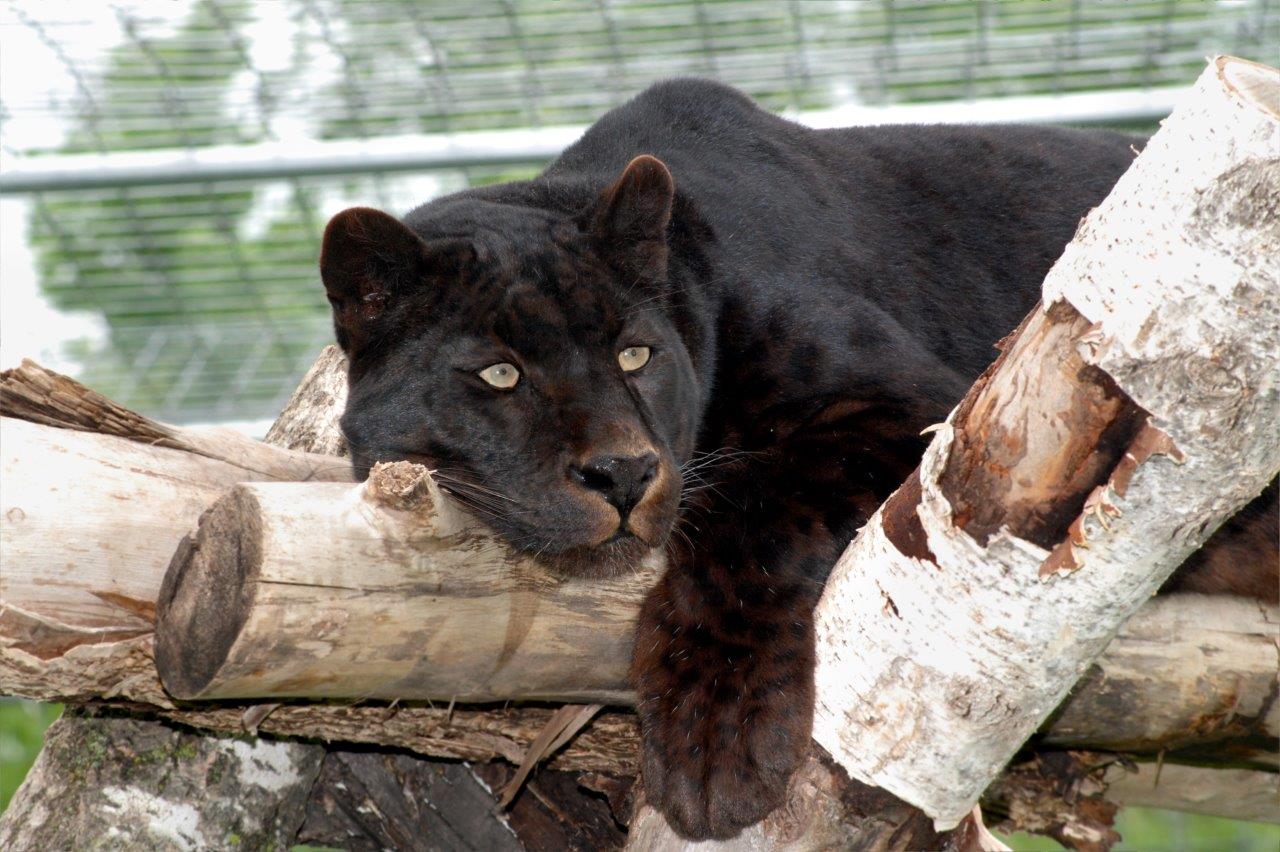 Hanan tells One Green Planet, “he is always high enough to be able to survey the wooded kingdom that surrounds him here at our remote rural location.” A true jungle king, just doing what big cats do best! 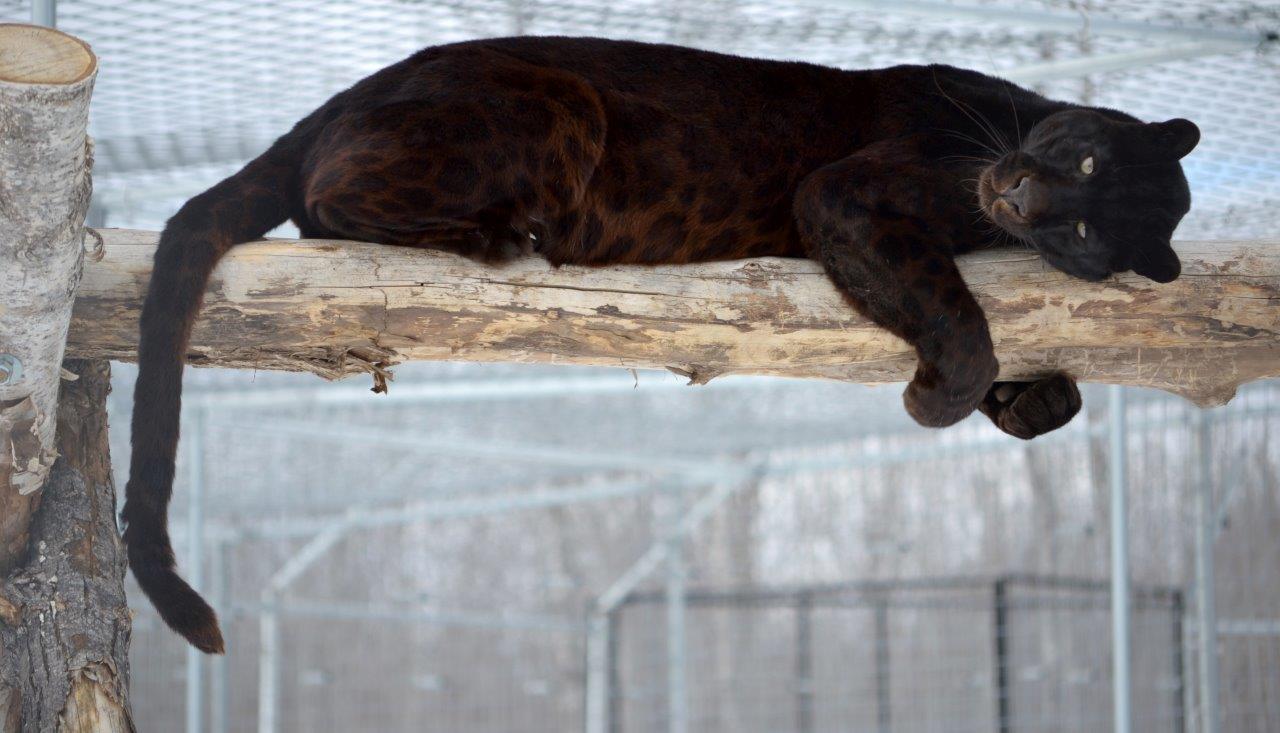 When Shazam isn’t relaxing on his jungle gym of perches or pestering his buddy Diablo Guapo, he can be found entertaining himself with one of the many enrichment activities TWS provides for him.

“[Shazam is] one of our younger cats and one of our most active. We keep his mind and body challenged with target training through our operant conditioning program,” says Hanan. Here he is stalking a group of hanging targets. 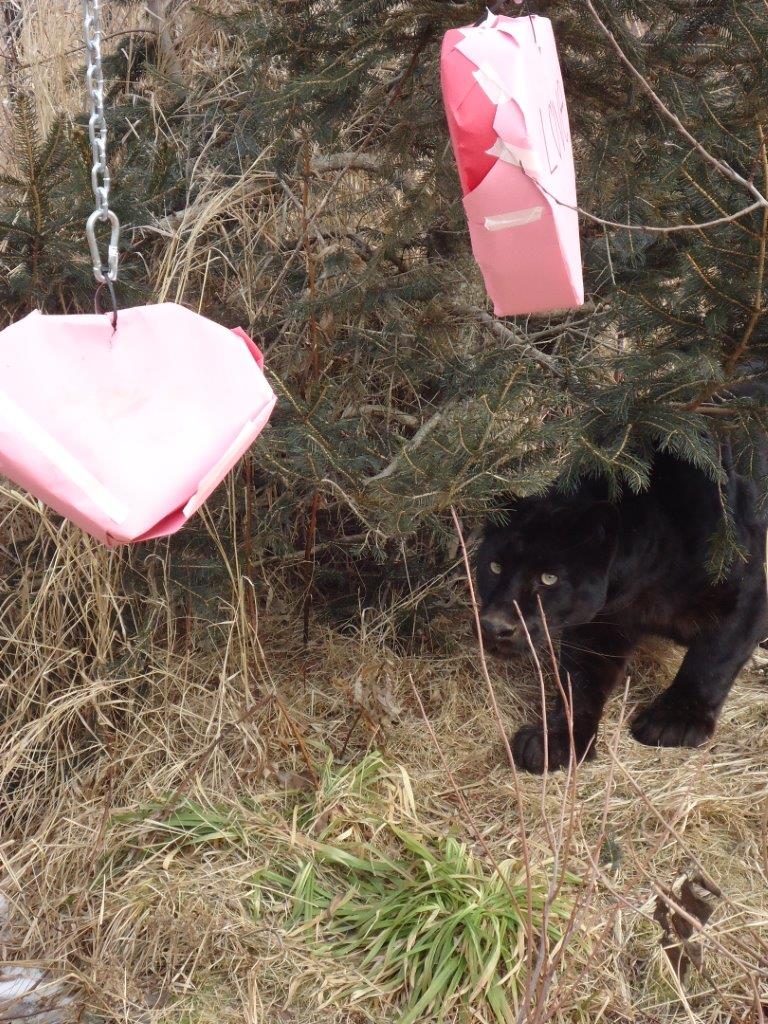 Like any young active cat, Shazam is always on the prowl (excuse the pun) for a new game or a new toy he can demolish.

“He absolutely loves anything hanging from his habitat so we’ll hang food and unique forms of enrichment to challenge him, too,” explains Hanan, “We even hung his Christmas tree last year, which he thoroughly enjoyed batting around.” 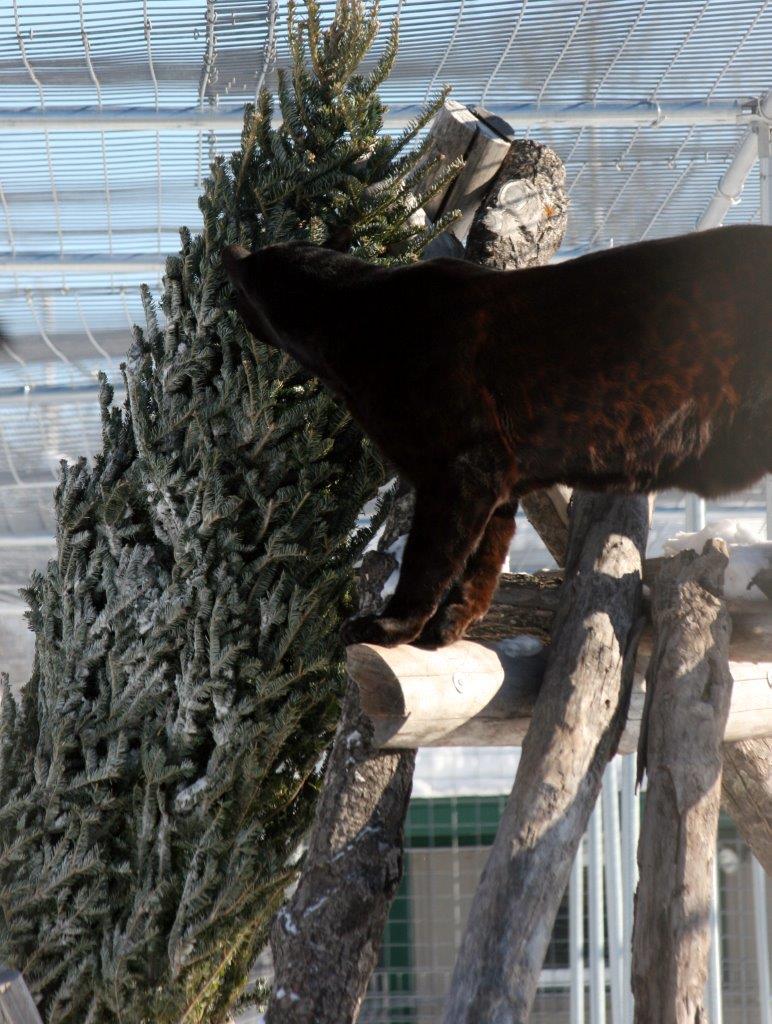 Shazam has certainly found a happy ending at TWS, but like all of the residents of the sanctuary, he should ideally be living free in the wild. The exotic animal trade, especially the trade of big cats runs rampant in the United States, despite the little attention it is usually given. It is currently legal to own a big cat in 20 states in the U.S., seven of which do not even require owners to have a license. This failure on the part of the law has lead many cats like Shazam to fall into the hands of inexperienced owners who are not prepared to care for an animal with such specific needs. Not to mention the very important fact that these cats are called “wild” for a reason and are dangerous when kept in captivity. Since 1990, there have been a reported 742 “incidents” involving captive big cats in the U.S., many of which could have been avoided if there were stronger legislation in place to prevent the private ownership of these exotic species.

While TWS has done an incredible job caring for Shazam and all their residents, their ultimate goal is to see the end of the “captive wildlife crisis” in the U.S. that makes their services necessary. You can help many more big cats, like Shazam, escape from the cruelty of being kept as a captive animal for entertainment or personal ownership by participating in TWS’ “No More Wild Pets” campaign. The more awareness that can be brought to the plight of captive cats, the better! Let’s keep the wild at heart, not in our backyards!

All image source: The Wildcat Sancutary