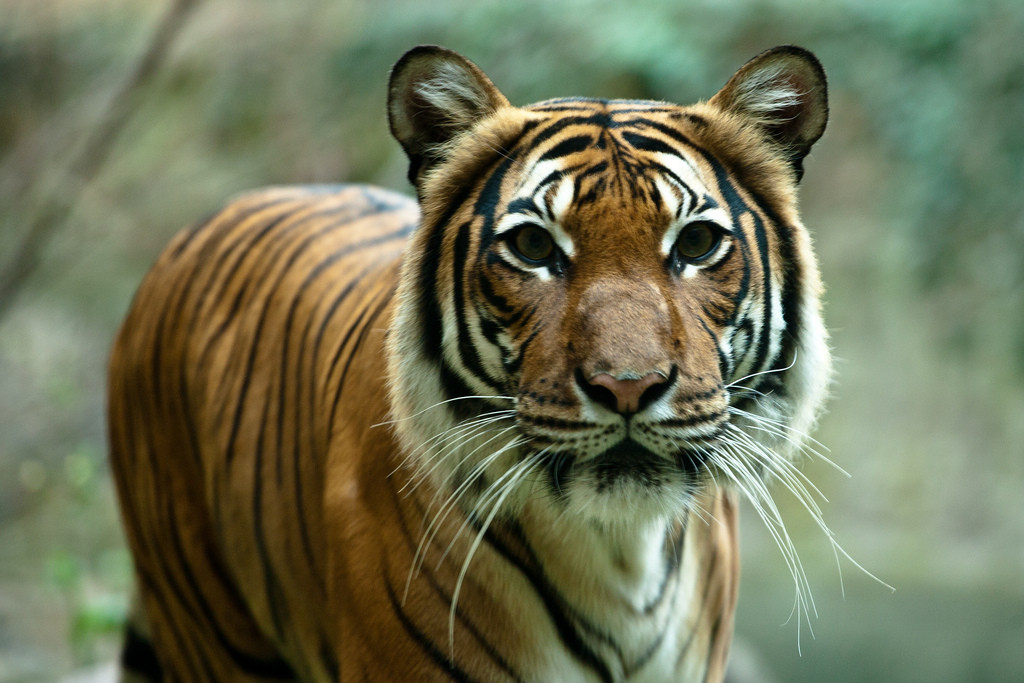 A highway safety sign read, “CAUTION EXOTIC ANIMALS”. The people of Zanesville, Ohio were shocked to learn that large predators, including lions and 18 rare Bengal tigers, were freed from a “wildlife preserve” in their town. Even the 911 Operator who took the initial call said, “Come again?” in response to the caller explaining that, “There’s a bear and a lion out.”

The images of the massacre’s aftermath are horrific. They bring up the issue of keeping large predators (not indigenous to Ohio, the United States or even the North American continent) in captivity. Many claim conservation, but those who want to turn a profit outnumber true conservation efforts.

Infinite growth and blind-consumerism are also to blame for several of the problems that big cats face today, such as: deforestation/loss of habitat, pollution, wildlife trade and poaching. These are the side effects of global industries that are not utilizing alternatives.

It shouldn’t take dead animals painting the Ohio landscape or a subspecies of big cats going extinct to know that we should cherish and protect these beautiful animals. Below are three of the biggest threats to big cats today and three ways to get involved.

This is what a “Mall Act” or a “Pay-to-Pet” operation looks like. These makeshift operations involve cubs because gaps in regulations by the United States Department of Agriculture (USDA) allow it by a small margin of four weeks. Cubs are torn away from their mothers at eight weeks, thus imprinting on humans, and unable to be placed in the wild. By 12 weeks, they are deemed too dangerous to be used in public. These animals are raised in unfit living conditions, bred to expand operations, and are killed for profit when they grow too large, as their body parts are valuable in illegal markets.

Never pay-to-pet! It does not support conservation in the wild. These operations are solely for-profit. Always remain suspicious of animal sideshows, petting zoos, and pay-to-pet operations. Engage the operator politely and ask productive questions such as:

Asking these questions will inform the operator that the public is curious and is paying attention to their actions.

Are you aware of a pay-to-pet operation near you? If you suspect neglect or abuse, call your local Animal Control Office (ACO) and express your concern. The ACO was created to protect animals, and they want to be informed of public concerns.

There is a large population of big cats that are affected by the exotic pet trade in the United States. They are popular among the affluent, as they are a status symbol (albeit a shallow one), and popular among those who claim to “love” them.

Big cats that are kept as pets are innocent victims who suffer under their owner’s vanity. They grow up, are kept in confinement, and seized once they become problematic. They are often euthanized, or killed when they escape, as they become a hazard to the public. Who can forget the Zanesville massacre? Unfortunately, this is not an issue that we can rescue our way out of.

Sanctuaries, and rescues alike, are reaching their capacity and financial limits. The only way out for the big cats is to change and create new policies. Until then, we can do our best to help support the rescues by donating, purchasing items on wish lists, and/or symbolically adopting big cats. You can symbolically adopt a big cat like Alexander, who was purchased as a baby for $2,500 by a family. If it weren’t for an appeal from the SPCA of Houston, he would have never reached the PAWS wildlife sanctuary. This is one of many examples of animals suffering in the exotic pet trade.

When big cats and loss of habitat are mentioned, Sumatran Tigers immediately come to mind. In 1978, there were more than 1,000 Sumatran tigers, now there are less than 400. This is because of poaching and the loss of their habitat due to the palm oil industry. The problem with the palm oil industry is that forests, where the tigers live, are cleared out to make way for plantations.

With nowhere to go, the big cats become a menace to locals, killing cattle and livestock. Sumatran tigers are poached for their use in traditional Chinese medicine and killing them earns better pay than other jobs that are available to poachers.

Through the World Wildlife Fund (WWF), you can make a donation, or symbolically adopt a tiger. You can also sign this petition urging Indonesia to save 30 Hills, a lush rainforest in Sumatra. The goal is to re-zone this land so that the land can be leased to conservationists or turned into a national park. Let your wallet be your voice and become a conscious consumer by only purchasing paper that is 100 percent recycled or FSC certified.

Big cats need our help. By supporting the sanctuaries that rescue them, by taking action alongside the organizations that influence policy and by becoming a conscious consumer, we can make a difference in their future. After all, their future is also our future.