The process to get certified as an exotic animal sanctuary is shockingly simple. Anyone with a name, address, and $40 for the fee can be certified to house big cats in most states. While some owners who purchase tigers, cougars, leopards, and lions may truly have the best interest of the cats at heart, more often than not, these big cats just become too large of a responsibility to handle.

Sadly, for this reason, many big cats and exotic animals fall victim to abuse, locked into cages that are too small, bred for a profit, and left to starve. This was the harsh reality of the lives of Keisha and Zeus, two big cats who were being held at JNK’s Call of the Wild “Sanctuary” in New York. After years of complaints about the condition of animals and overwhelming debt, the USDA finally shut down this cruel establishment in May 2014. 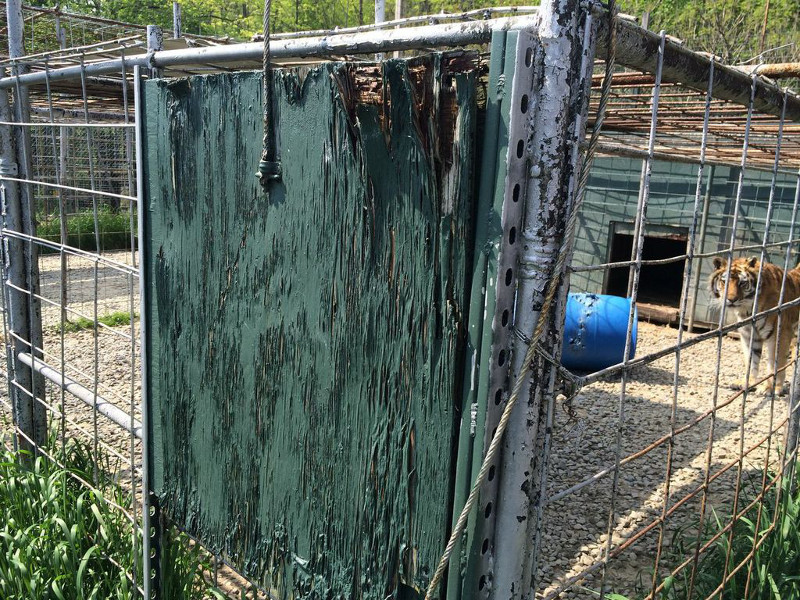 With cages that were literally rotting and falling over, this facility posed not only a direct threat to the well-being of the animals living there, but also a serious threat to members of the general public. What would have happened if a full grown starving tiger escaped into a local neighborhood?

With the help of IFAW, the state arranged for all the animals living at this facility, 18 in total, to be relocated to sanctuaries. Four of the eleven tigers confiscated from JNK’s were transported to Big Cat Rescue in Tampa, Fla.

Unfortunately, one of the four tigers, Sasha, did not make it to the sanctuary but died of literal starvation before she could be transported. The journey for Kimba also proved to be a test of will. 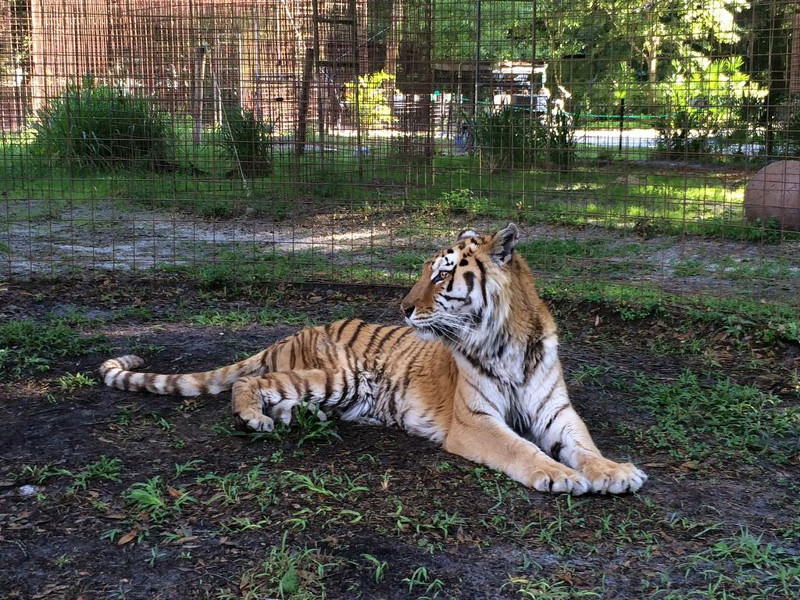 Carole Baskin of Big Cat Rescue tells OGP,” If anyone wouldn’t survive this trip, it would be Kimba. She just had so little spirit left in her. I checked on her several times to be sure she was still breathing, and seemed blissfully asleep.”

Baskin expands on the deplorable conditions of the JNK’s “sanctuary” from which these tigers were saved, “The place where we rescued these tigers from called themselves a sanctuary and had a beautiful website for soliciting donations. What the public did not know, but we learned from volunteers who contacted us after the rescue, was that Kimba had been Zeus’ mother.”

While JNK’s told the public they were a rescuing facility, all of the “new” tigers were in fact being bred on site. Baskin continues,” the owners bred her [Kimba] back to Zeus for four or five more litters. According to them, all of the tigers at JNK’s Call of the Wild, other than Kimba, has been born there and yet the public thought they were supporting a rescue facility.”

It is truly unfortunate to see how blatantly abusive the owners of this fraudulent facility were to these kind creatures. Possibly the worst part of all this is that it is 100 percent legal for them to have ownership over these animals. According to Baskin, the facility had not been properly inspected for six months by the time it was finally shut down.

Kimba, the eldest of the tigers, unfortunately passed away only 17 days after her rescue. After being severely dehydrated and starved for so long, Kimba’s kidneys went into failure and her condition was too severe for her to recover. The staff at Big Cat Rescue tended to Kimba with endless care and compassion, but ultimately a UTI complicated by an E.coli infection proved too much for the aging tigress. 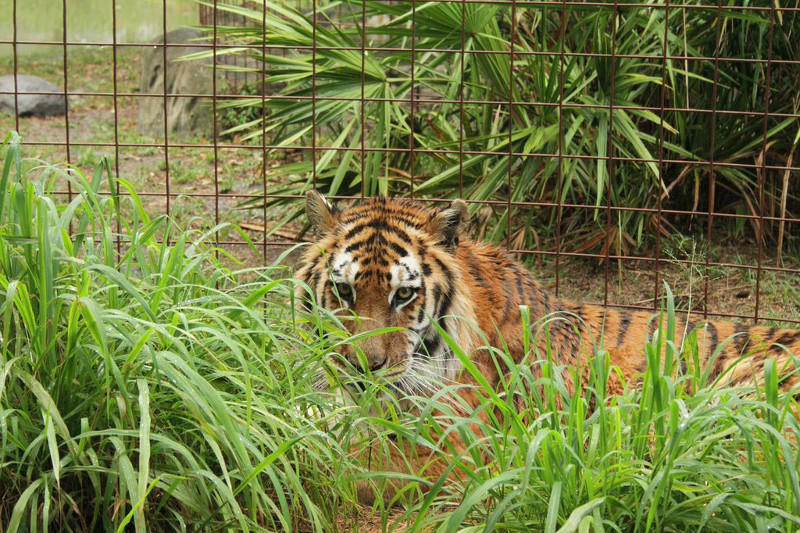 Baskin tells OGP, ” [this] broke our hearts, because Kimba wouldn’t have been so ill if her former owner had just cared enough to keep her cage clean.”

Ultimately, however, knowing they had been treating her accordingly while she stayed at Big Cat rescue, “gave us some peace in knowing that we were doing all that was medically possible for Kimba, and that if she had not responded to the drugs by now, she wasn’t going to.”

Kimba and Sasha, are survived by Keisha and Zeus, the two younger tigers who are now happily residing at Big Cat Rescue.

Zeus, Kimba’s son, arrived at the sanctuary with limited vision, a problem that Baskin believes is the result of a separated retina. Keisha, arrived in a similarly rough-and-tumble condition, missing a large portion of her tail and half of an ear. It is thought this may have been the result of a tussle with lions she was living with in close quarters. 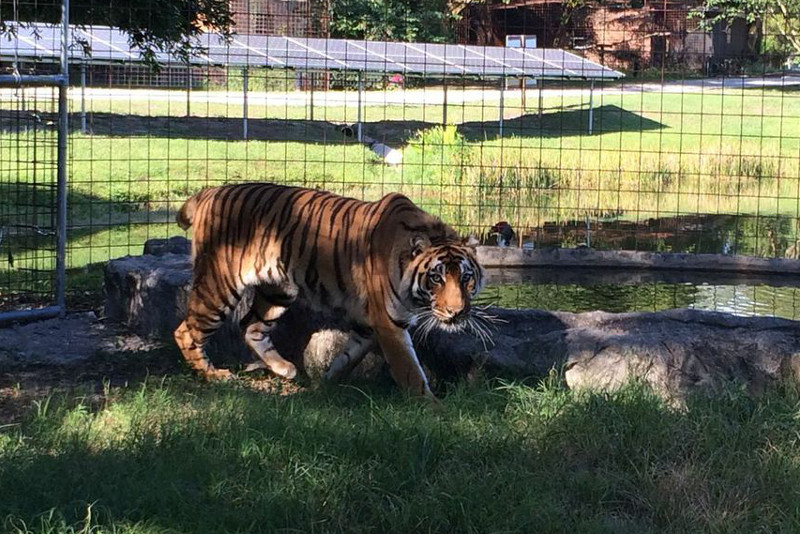 Now free to roam around their new habitat, Keisha and Zeus are beginning to perk up and show their unique personalities. 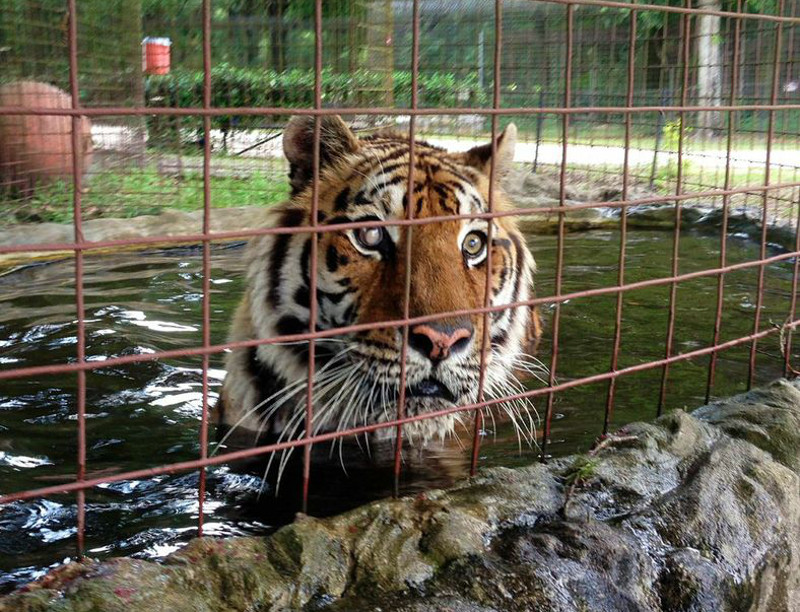 Baskin tells OGP, “Zeus loves everyone and everything about his new home,” especially his new pool. “[He] is the picture of contentment after dinner when he takes his long baths before napping in the grass as the sun sets.”

Baskin recalls how Zeus reacted upon being rescued, “As soon as Zeus saw food, he RAN down the length of his cage, chasing Big Cat Rescue’s Operations Manager, Gale Ingham, who was racing (outside the cage) toward the beast wagon that had been affixed to a hole that was cut into the side of his cage.”Which of course made for a rather comical anecdote.

“Zeus was the largest tiger and the hole wasn’t really big enough, but metal piping made it impossible to make the hole any larger,” Baskin continues, “Zeus didn’t care. He wanted that life giving morsel of food so bad that he squeezed, like liquid tiger, through the opening into the circus wagon. Jamie dropped the door and Zeus was on his way to a life of luxury that he couldn’t possibly imagine.” 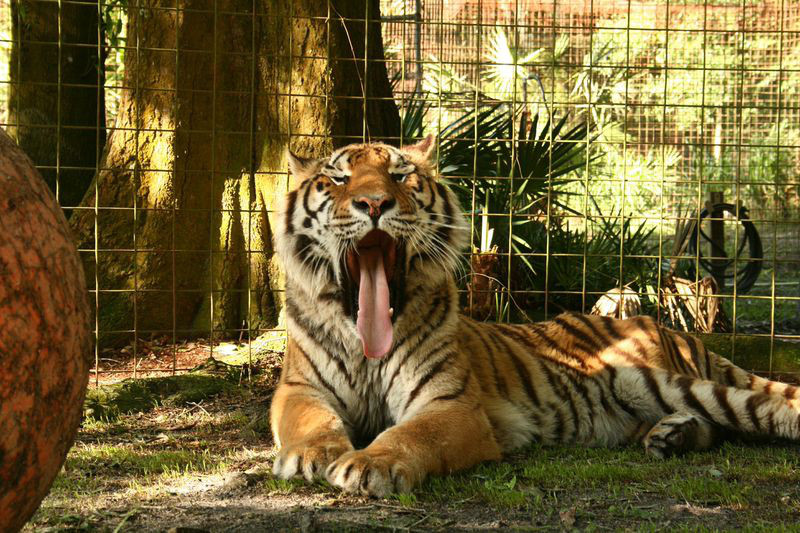 Keisha is the more reserved of the two. It took her some time to overcome her shyness and eat when in the presence of staff member. Now, happily at Big Cat Rescue, Keisha likes to spend her days atop her perch watching everything that goes on at the facility.

While the ending of the story for Keisha and Zeus is a happy one, the tale is hardly over for the thousands of other tigers and big cats that are living as “pets” across the U.S.

Baskin explains, “the USDA typically only inspects [facilities] once a year and if they cite an operation for a violation of the Animal Welfare Act, then it can be a year before they come back to see if that has been corrected…On average it takes about 6 six years of severe violations before USDA will take any action. Then it’s another 6 years of court battles, appeals and usually ends in a slap on the wrist, and a small fine, which the violators just see as the cost of doing business.”

To help end this needless abuse of big cats, tell your congressman to support the Big Cats and Public Safety Act. Click here to learn more and to take action! Big cats are beautiful and deserve to be free! To learn more about Big Cat Rescue, check out their website and Facebook page.