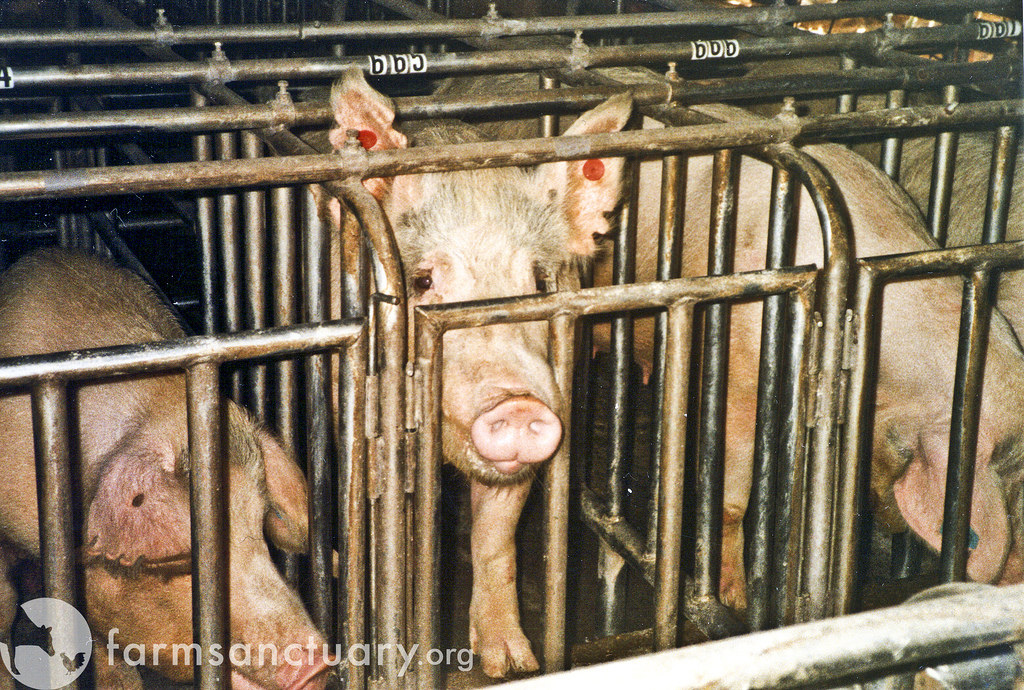 In recent years, the topic of gestation crates has made plenty of headlines, and for good reason. A gestation crate is the term used to describe the cages — which are only two feet wide — which hold female pigs for their entire lives, immobilizing them so that they cannot turn around or lay down comfortably. These sows are impregnated through artificial insemination, and confined in stalls for the entirety of their (many) fourth month long pregnancies.

It’s no surprise then that animal advocates have lobbied for legislation that would ban this egregious practice. So far, nine states — including Arizona, California, Colorado, Florida, Maine, Michigan, Ohio, Oregon, and Rhode Island — have passed laws that ban gestation crates. Despite the incremental progress, however, some politicians have come out as strongly opposed to any sort of legal ban, citing a variety of reasons that simply don’t hold up to scrutiny.

Case in point: in 2013 and 2014, New Jersey Governor Chris Christie vetoed a bill that would ban gestation crates in the state, despite overwhelming bipartisan support in the state Assembly and Senate. Even more frustrating, a poll taken among New Jersey voters revealed that an impressive 93 percent were in favor of Christie signing the bill into law.

Christie is joined by a number of other influential people who openly oppose banning gestation crates. Why? You might ask … let’s take a look at some of their reasons.

According to Dave Warner, a spokesman for the National Pork Producers Council, gestation crates prevent aggression between sows, which supposedly emerges when multiple adult pigs are housed together.

Of course, this observation fails to identify the underlying cause for such aggression: the factory farming industry itself. All animals killed for food, including pigs, suffer stress, anxiety, and other stereotypic behaviors when housed in this type of environment. The sounds, concrete floors, and inability to access the outdoors are just a few examples of conditions that cause unnatural aggression in pigs. If aggression does emerge around pigs, especially when feeding, there are plenty of humane alternatives available that do not involve locking them in these crates.

2. Gestation Crates are Not Even a Problem.

When Christie vetoed the second iteration of the ban last year, he urged state legislators “to turn their attention to actual problems facing New Jersey.”

In 2014, there were about 9,000 pigs in New Jersey and 20.5 million in Iowa. While Christie’s state totals may dwarf in comparison to Iowa, the country’s largest pork producer, they are by no means insignificant. And Christie, a politician with a history of supporting pro-animal legislation, cannot suddenly claim that animal suffering is no longer a problem.

3. Crates are Cheaper Than Alternatives.

Some gestation crate proponents erroneously argue that these devices are cheaper than the alternatives. In response to the Christie controversy last year, Humane Society International (HSI) refuted this point in a white paper, which demonstrated that group housing is often the same or less expensive than gestation crates. Furthermore, group housing situations may also provide environmental and sustainability benefits.

4. Consumers Don’t Care About the Issue!

In fact, they do: when polled, 93 percent of New Jersey voters were in favor of the proposed ban. And, an American Farm Bureau poll found that 95 percent of Americans believe farm animals should be well-cared for, and most don’t consider gestation crates to be humane.

5. Calm Down Everyone … Gestation Crates ARE Humane.

Speaking of humane, Howard Hill, the president of the National Pork Producers Council, has argued in favor of gestation crates, calling them humane and providing ease for individual care of sows. However, by virtue of their very name (a stall used to forcefully impregnate a sow), and the atrocious conditions that are so rampant in the industry, gestation crates are inherently inhumane.