8 Puppy Mill Survivors Whose Stories Will Give You Hope 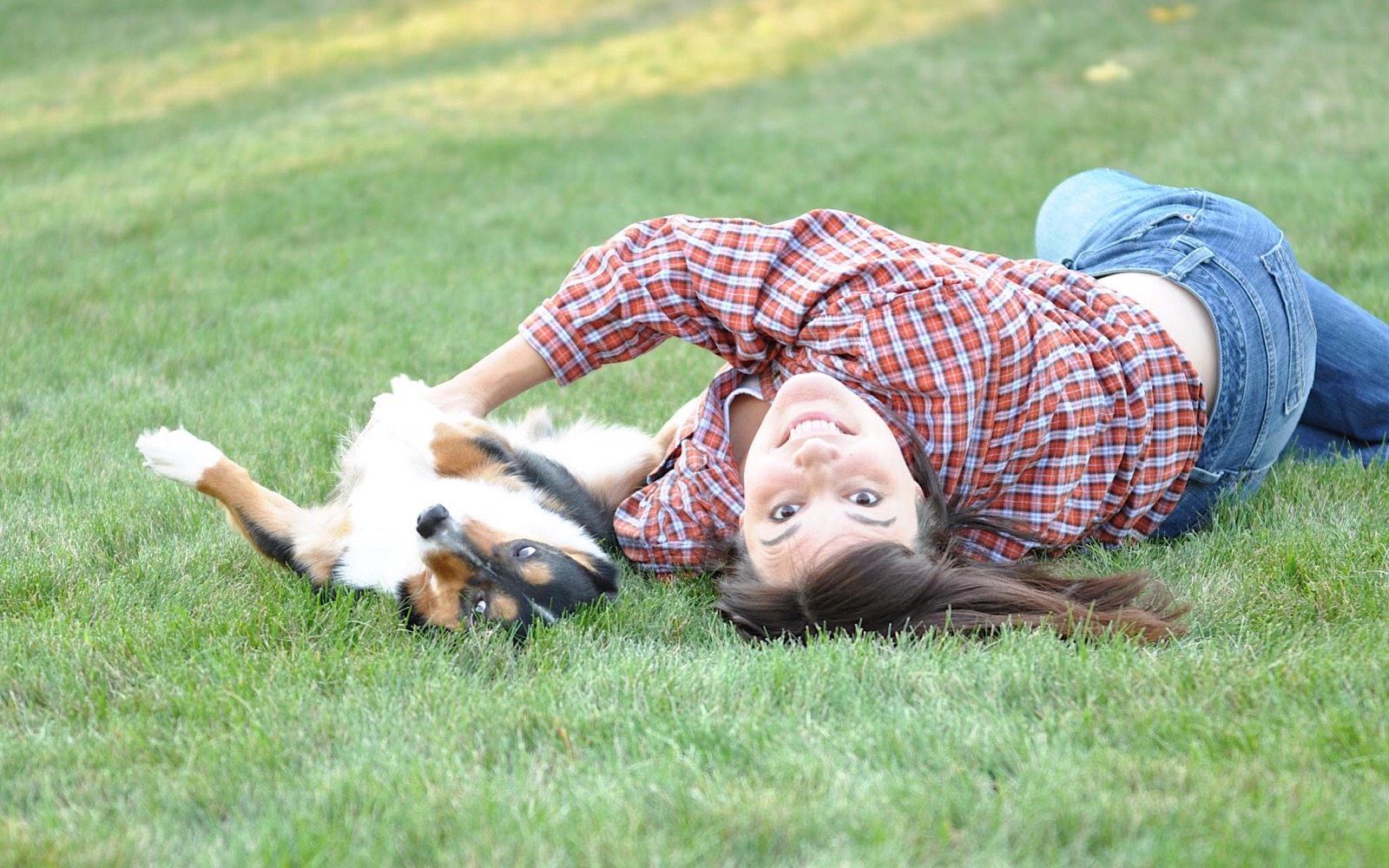 Currently looking to welcome a dog into your life? Be sure that you know exactly where the animal comes from … and if you want to avoid unwittingly funding animal cruelty, always adopt from your local shelter rather than seeking to purchase a dog. Puppy mills are large-scale commercial breeding facilities that can house staggeringly high numbers of dogs at any one time. In some of the largest puppy mills, up to 1,000 breeding dogs can be held. The American Society for the Prevention of Cruelty to Animals (ASPCA) estimates that 10,000 puppy mills could be currently active throughout the U.S.

In puppy mills, dogs are forced to occupy tiny wire cages where they have little space to stretch or even turn around. It is not uncommon for cages to be stacked on top of one another, creating a highly stressful environment for the dogs involved. Poor hygiene practices, pervasive neglect, and routine inbreeding can cause dogs born in puppy mills to suffer from a vast range of health problems, including mange, dental issues, genetic deformities, and severely matted fur, to name just a few. The puppies who are deemed attractive enough to be successfully marketed by their breeders typically end up being advertised and sold online, through print advertisements, at certain flea markets, and in pet stores, thus generating a profit for the puppy mill industry and allowing it to continue.

However, hope and inspiration can be found in the stories of the dogs who were rescued from these hellish facilities and went on to live happy lives, while helping to raise public awareness about the issue. The dogs below have diverse stories to tell. Some of them are alive to this day, and some have sadly passed on. But the one thing every one of them has had in common is their ability to reach the hearts of people all over the country and all over the world, teaching us that dogs deserve to be loved and cherished, always.

Harley was one of the original leading lights of the movement against puppy mills. This tiny one-eyed Chihuahua had a truly enormous force of will. He endured horrendous conditions in a puppy mill and suffered a number of serious health problems caused by neglect before being saved by Dan and Rudi Taylor. With the help of his guardians, he soon became a hero for puppy mill dogs everywhere through his growing social media fame and his many “freedom rides” with his best friend Teddy. These “freedom rides” aimed to raise awareness of the horrors of puppy mill farming and encourage people interested in getting a dog to adopt, never shop. Though he passed away in 2016, his memory will live on forever through his education and advocacy organization, Harley’s Dream. 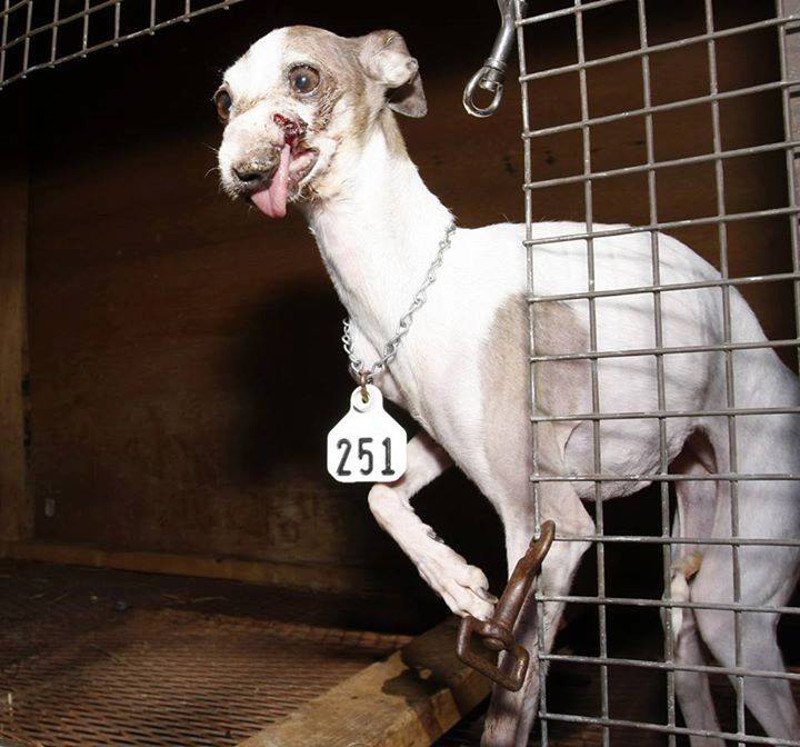 Lily, another NMDR rescue dog, was freed from a deplorable facility in February 2007 by Theresa Strader. In fact, she was the one who inspired Strader to launch NMDR, as Strader never wanted to relive the terrible sight she witnessed that day: “Hundreds of terrified ailing faces, imprisoned in their wire confines, some staring at me, but most too fearful to look into my eyes.” Sadly, the facial deformity that Lily had been born with — a direct result of irresponsible breeding practices at the puppy mill — prevented this beautiful dog from eating properly, and she lived for just fifteen months after finding her new home with Strader. However, Strader made sure that for the rest of Lily’s life, she experienced nothing but love and respect at human hands. The memory of Lily’s love is what drives her to carry on with her NMDR rescue work, no matter what challenges may arise. 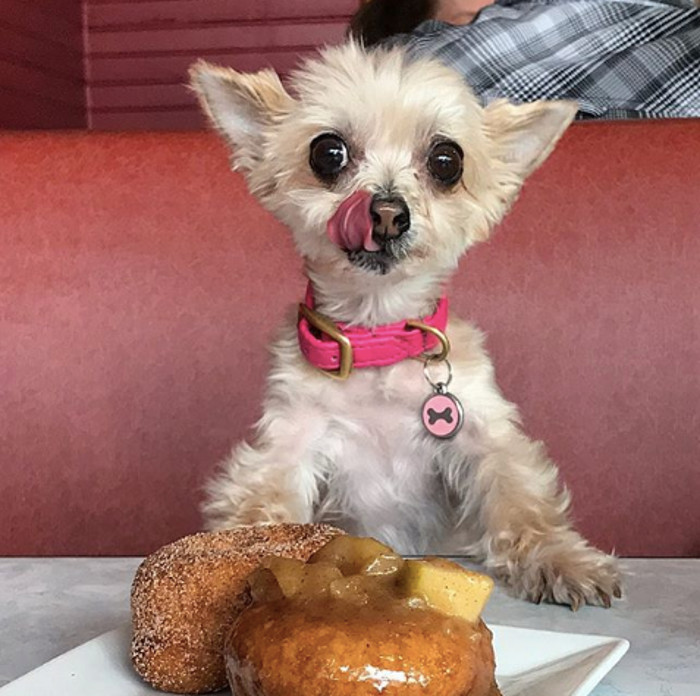 This sweet girl is described on her website as “a four pound puppy mill survivor and former death row inmate” from a South Florida kill shelter, who now enjoys a life of luxury in her new home in Brooklyn, New York. Despite all she has been through, it seems that nothing can dampen this little lady’s spirit. A quick glance through her website or Instagram page will tell you that she loves nothing more than dressing up with her friends, partying like there’s no tomorrow, or chowing down on a delicious baked good or two. You can follow her on Instagram to keep up with her hilarious, heartwarming adventures. 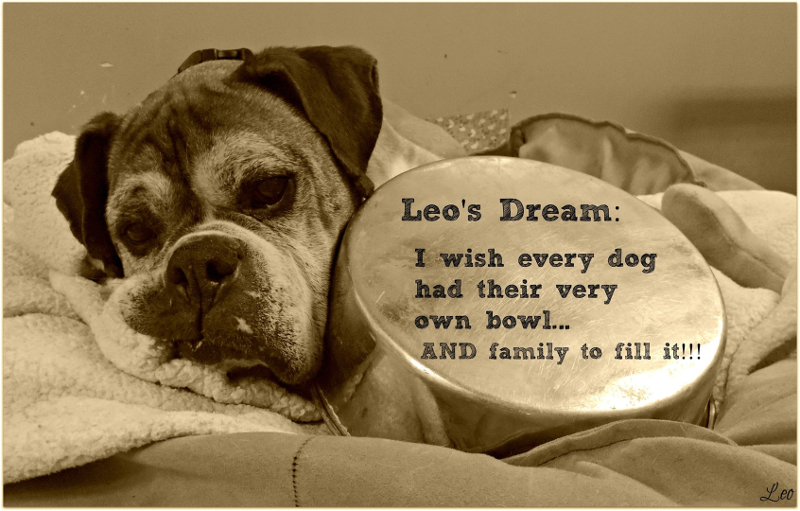 Lovable Leo — so named because of his affectionate, caring disposition — languished in a puppy mill for years before finally being rescued by kind humans who transported him to Vail Doggie Day Spa and Lodging, Colorado. On his Facebook page, his guardians beautifully described what might have run through his mind during that journey: “I was so lucky back in March 2012 when a rescue group pulled up in their beautiful van to save myself and some of my buddies. I heard a man say my life would get better and boy was he ever right. We went on a long ride from Missouri to Colorado — we were all quiet and nervous. I had terrible pains in my belly, fleas all over me, mouth was full of blood, and my ears full of dirt and bugs, but I just knew I would be okay.” Though he has since passed away, his legacy lives on though Team Leo Animal Rescue, a rescue organization that his guardians founded in his honor. 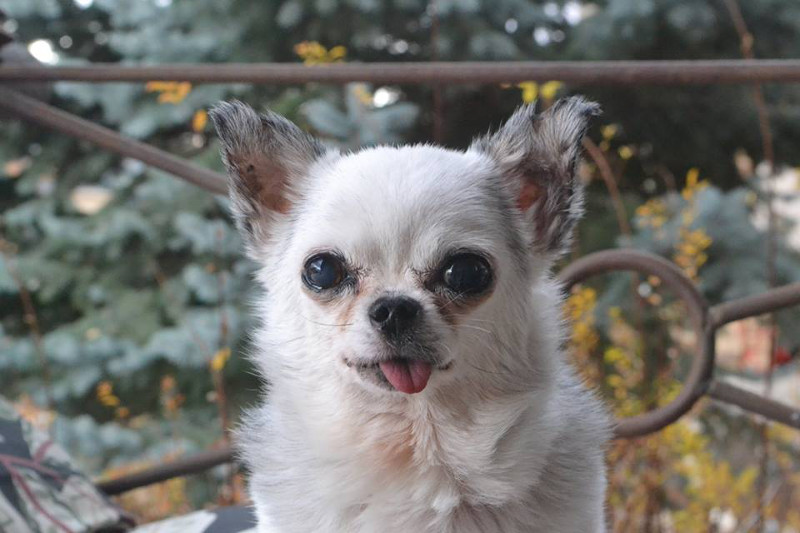 Teddy spent the first seven years of his life trapped inside a wire cage in a dark, overcrowded puppy mill. Luckily, he was rescued by NMDR in 2012, along with his “little soul mate” Gwinnie, another puppy mill survivor. They both ended up in the loving arms of a woman who genuinely loved and cared for them. This plucky pup is still living life to the fullest, despite dealing with a number of health issues, and his ever-optimistic motto is simply “Life is Good!” Harley was his best friend, and Teddy now aims to carry on with the Harley’s Dream mission by selling beautiful artwork through the site. You can check out Teddy’s Facebook page or Instagram for more information about him. 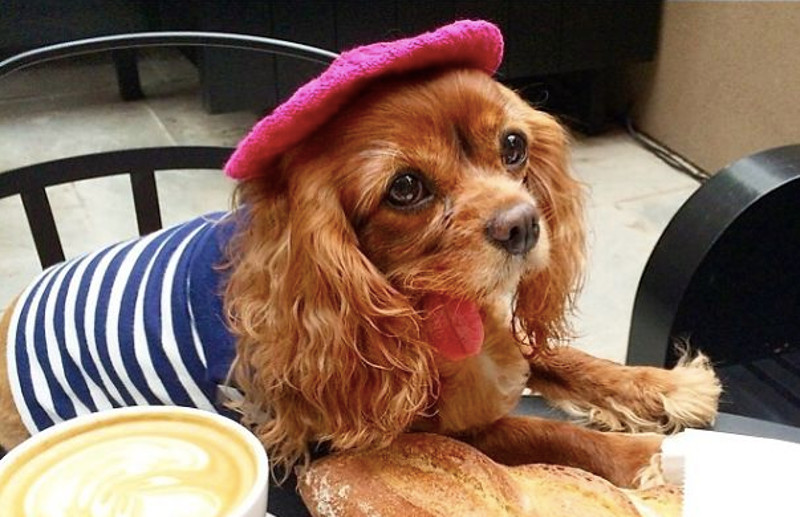 Toast was a Cavalier King Charles Spaniel rescued from a puppy mill in 2011. It wasn’t long before she began to capture the hearts of animal lovers all over the world through her website and Instagram page. She even took part in a high-profile “wedding” with Finn, a fellow canine social media star. All proceeds raised by this wedding were donated to the cause of ending puppy mill farming. This sweet girl was full of energy and enthusiasm, instilling her fans with the same unbounded zest for life that she possessed. Sadly, she passed away on December 12, 2017, but her memory will live on in her fans’ hearts forever. At the time of her passing, her guardians said, “She knew she was loved and adored by people around the globe and we are so grateful to have known her.” 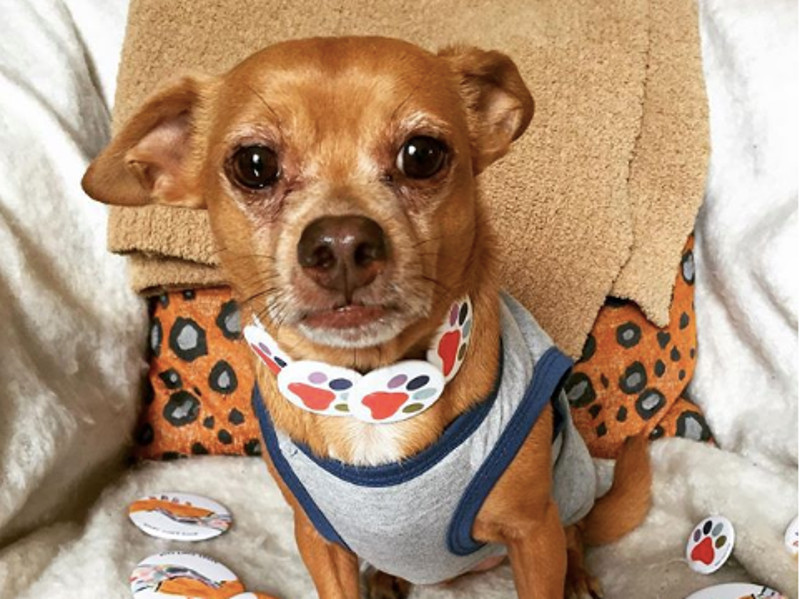 Finn is the dog Toast married. He, too, came from a puppy mill farm, and went on to play an instrumental role in raising awareness about the issue. His guardian is the heiress Amanda Hearst, who became determined to fight against puppy mills after being shocked to learn that her new pup had come from a horrific facility that had abused over 900 dogs. Working together with the Humane Society of the United States (HSUS), Hearst founded the Friends of Finn committee in 2010. The society has since held a variety of fundraising and education events to help further the cause of stopping puppy mill abuse. As for Finn? He now spends his time living the good life, basking in the love of his hooman, and being indescribably fabulous on Instagram. 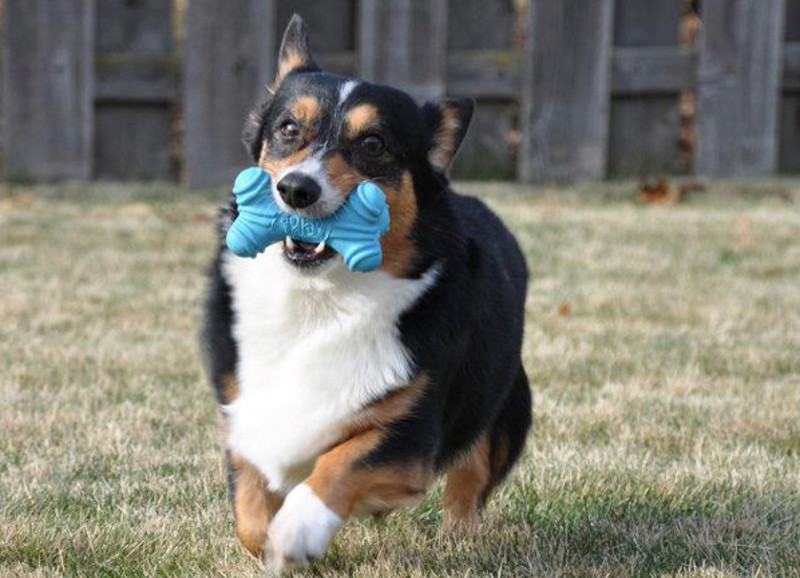 Skipper was a beautiful, enthusiastic Corgi who managed to bounce back from his deeply traumatic experience in a puppy mill, learning how to embrace the many simple joys in life. He — along with twelve other dogs — was rescued from a puppy mill in Iowa by Lakeshore Pembroke Welsh Corgi Rescue in 2008. Ten of these dogs were moved to Wisconsin, where they became known as the “Iowa Castaways,” taking on the names of characters from “Gilligan’s Island.” Skippy found a loving forever home with a woman who cared deeply for him, gradually helping him to overcome his deep distrust of humans. He died in November 2016, “snuggled up as close as he could possibly get” to the human who had finally taught him what it meant to experience unconditional love.

These dogs’ poignant, heart-wrenching, but ultimately hopeful stories inspire us to never stop fighting until all puppy mill dogs get to run free. To learn more about puppy mills and what you can do to help, check out the articles below: