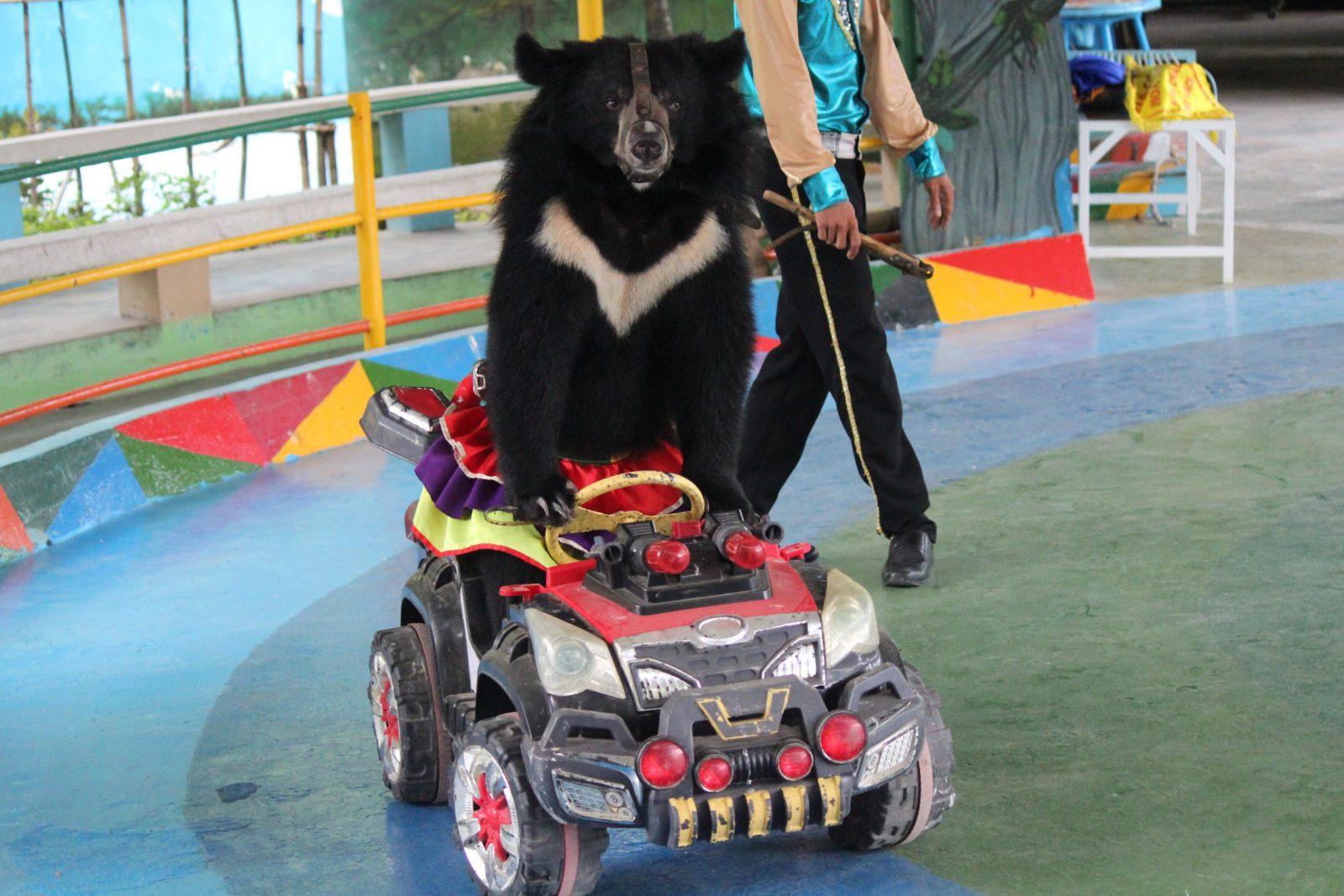 Endangered and vulnerable animals continue to be forced to “entertain” for profit at abusement parks in Vietnam’s cruel circus industry.

Animals Asia investigated the horrifying animal abuse in Vietnam circuses and ‘tourist’ attractions. These ‘entertainment’ destinations with forced animal performances continue to be one of the popular offers through travel agencies in the United States and Europe.

Animals Asia’s undercover investigators visited and inspected circuses and other facilities in Vietnam and released undercover photos from backstage where these poor animals can be seen kept in tiny and uncomfortable cages when they are not being forced to perform.

Animals Asia found 15 different species used for performances in 17 facilities. They found the most common ‘circus’ animal is the macaque which was used at 11 cruel circuses.

They discovered hundreds of animals kept in shocking living conditions, animals exhibiting stress-related abnormal behaviors, and they even found some animals dead. Many of the animals are listed as protected under Vietnamese law and are supposed to be prohibited from exploitation and commercial uses, but it is continuing.

The Vietnam Circus Report found species such as Asiatic black bears, Asian elephants, gibbons, and Siamese crocodiles exploited in these abusement parks. These species are “critically endangered” and “most endangered” under Appendix-I of the Convention on International Trade in Endangered Species of Wild Fauna and Flora (CITES).

The investigators said that they observed animals performing who had injuries, were dangerously underweight, and even slowed signs of self-harm. Many became extremely fearful when the trainer approached with a whip.

These poor animals are subject to loud venues, a large audience, loud music, and constantly changing lights which is the exact opposite of what their natural environments are in the wild, where they should be.

Trainers use dominance, abuse, or punishments like withholding food to get the animals to do the ‘tricks’ that they want. They often use whips or sticks to strike animals that do not instantly perform what the trainer wants. Handlers have been seen dragging beans by ropes attached to the bear’s nose, striking and dragging macaques, kicking, hitting, and dragging crocodiles by a rope tied around their necks, dragging snakes by their tails, and crushing the skulls of green pit vipers.

The animals are exhibiting signs of brain dysfunction and extreme agony from being held in captivity and forced to perform.

Thanks to Animals Asia, Vietnamese authorities and the management of these facilities have taken steps to stop the use of animals in their shows since the organization’s previous circus report in 2017. 16 circus shows have stopped using any animals, and seven have ended the use of some species, but the fight is far from over.

“Circuses with animals belong in the past and should hold no place in our current societies. They are dispossessed of their intrinsic needs to perform many of their natural behaviours, socialise with their conspecifics, play and forage as they would in their natural environment. Some are even taken from their wild homes and families to be subjected to such abusive treatment,” Animals Asia’s Animal Welfare Director Dave Neale says.

The remaining facilities continue to profit from the abuse and slavery of these endangered animals who should be out in the wild where they are supposed to be. Animals Asia demands that the Vietnamese authorities and facilities continue to take steps to end the confinement of these animals. Sign this petition to stand against animals being held captive for entertainment!