Poachers Are Killing Tigers to Sell Them for Their Bones. How We’re Working to Stop This 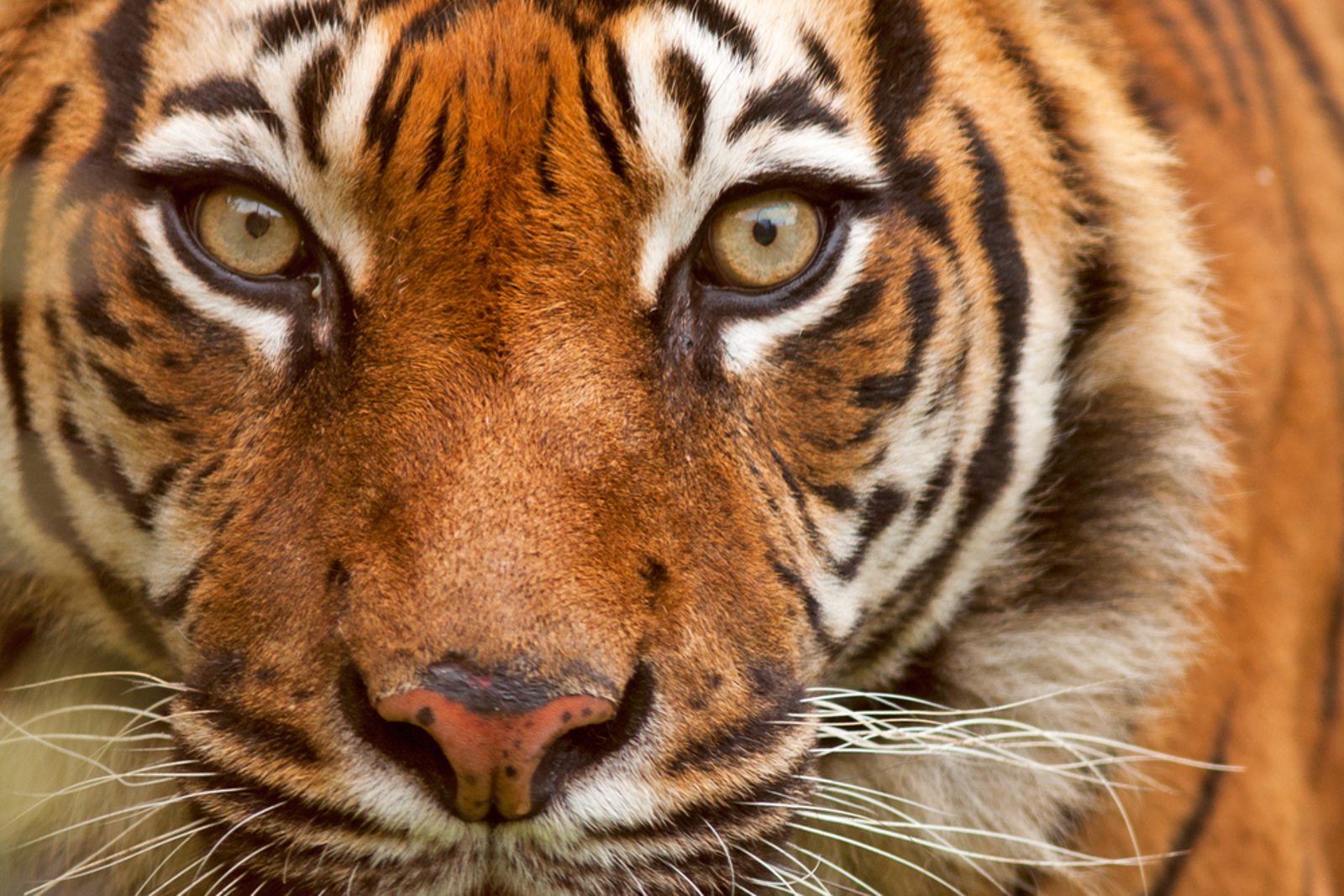 Southeast Asian tropical forests are some of the harshest and most challenging environments on earth, both physically and mentally. Their dense canopies block much of the light reaching the forest floor, creating a dark and claustrophobic environment. The understory is filled with plants with needle-like, inch long thorns that pierce the skin if you so much as graze them. Look a bit lower and the forest floor is crawling with critters: leeches, ticks and an abundance of venomous snakes.

These forests are also home to the world’s largest big cat – the majestic tiger—though most people who trek through them will never see one. In April, I found myself close on the heels of a tiger while on a law enforcement patrol in Sumatra’s Kerinci Seblat National Park (KSNP).

Sumatra contains the highest tiger population outside of India, making the region a crucial landscape for tigers. In partnership with KSNP management authority and Fauna and Flora International, Panthera implements a Tigers Forever project in the park’s core area to protect tigers and their prey. The project tackles wildlife and other forest crimes, mitigates human-tiger conflict, trains rangers and police to increase law enforcement capacity, and conducts biological research on tigers and prey species.

After five days of patrolling through dense rainforest, overcoming the usual hazards of heavy rains, landslides, and an earthquake measuring 5.7 on the Richter scale, we entered an area of KSNP historically known for its high poaching pressure. Almost immediately we started to see old tiger snare lines; poachers had marked the locations to notify others that the area had already been set with these cruel traps. Fortunately, the snares had long since been destroyed by law enforcement patrols. But as we trekked deeper into the forest, human signs and abandoned poacher camps became more abundant. Our next discovery was a snare site where a tiger had previously been caught.

Though I have dismantled active tiger snares before, this was my first experience with a snare that had caught a tiger. The scene was truly horrific; it was clear that in a frenzied struggle, the tiger had tried to claw itself out of the snare, leaving behind deep scratch marks in the tree where the trap was anchored. But the tiger’s struggle was no match for the thick cable snare. The tiger died in that trap. Its parts were likely destined for the illegal wildlife market, where they are used in traditional Asian medicines thought to treat ailments from arthritis to epilepsy. The field team informed me that the snare trap was over a year old and the offender had been caught and charged for his crimes. 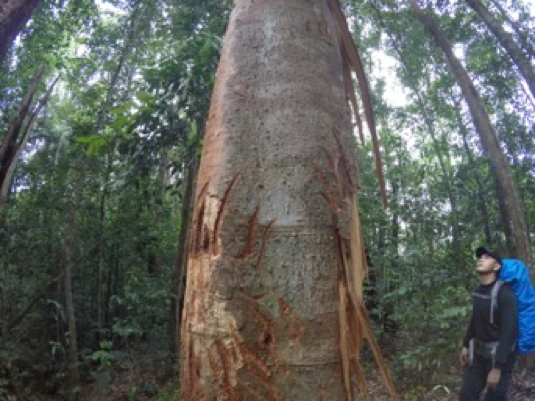 Tigers are one of the most charismatic and iconic species in the world, yet they are also one of the rarest and most threatened. Tiger populations have declined dramatically over the past century, from over 100,000 individuals to a mere 3,900 today. Their range has declined by over 97 percent, and a tremendous 40 percent of this range loss has occurred in the last decade. Tigers are extinct in China, Laos, Vietnam, and Cambodia — elsewhere, only a few strongholds remain.

Fighting to Save the Tiger

Recognized as a UNESCO World Heritage Site, KSNP is home to healthy populations of Indonesian wildlife, including elephants, sun bears, tapirs, clouded leopards, and tigers. Though the island’s tiger population faces serious threats both within the park and in buffer-zone forests — including habitat loss to agricultural developments and human-tiger conflict — poaching of tigers and prey species is the most pernicious of all.

Training law enforcement patrols and equipping rangers with the resources needed to combat poaching is one of the most critical solutions to saving Sumatra’s tigers. In response, Panthera has developed a PoacherCam – the world’s first camera trap to instantly distinguish between people and wildlife — to revolutionize the fight against poaching. When the camera covertly captures human activity, the images and location are sent to law enforcement officials in real-time via wireless networks, helping them identify, capture, and prosecute poachers. Soon, this conservation technology will also allow Sumatra’s rangers to better protect the island’s tigers.

Heavy rains continued to slow us down on the way to camp, but a short break in the downpour revealed a ray of hope: a fresh tiger pugmark from a large male. The tiger had been walking towards us and was scared off the trail by our presence, likely using its perfect camouflage to watch us under the cover of dense foliage.

The chance of spotting a tiger here is next to none. Many wildlife rangers who have worked in the region for upwards of two decades are yet to see a wild tiger, and many of them wouldn’t want to. There is a local belief that tigers are the guardians of the forest, and if you enter their home with good intentions, they will allow your passage.

Seeing a tiger pugmark this fresh was a true privilege and a reminder of what the brave and dedicated rangers of KSNP devote their lives to. Spending significant time away from family and being fired upon by poachers and mobbed by angry villagers, the rangers’ passion to save the animals and the forests where they live continues unabated. 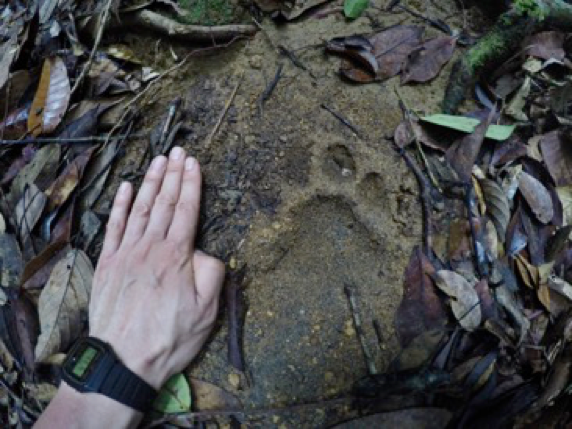 Tropical rainforests are finely balanced ecosystems and tigers are the apex predators in these landscapes. Like a spider web, once links are removed, the integrity of the ecosystem is compromised.  As tigers have large territories, protecting one individual is equivalent to protecting 100 kilometers of tropical forest. This, in turn, benefits other large endangered wildlife, as well as the vital ecosystems people rely on for food and water.

We know how to save tigers — how to count them accurately, the habitat and prey they need, and what interventions protect them best. Due to the razor sharp focus and determination of the KSNP and FFI rangers, the region maintains a healthy tiger population, with signs of threats decreasing and tiger signs and prey on the increase.

Learn how you too can help save tigers by clicking here.