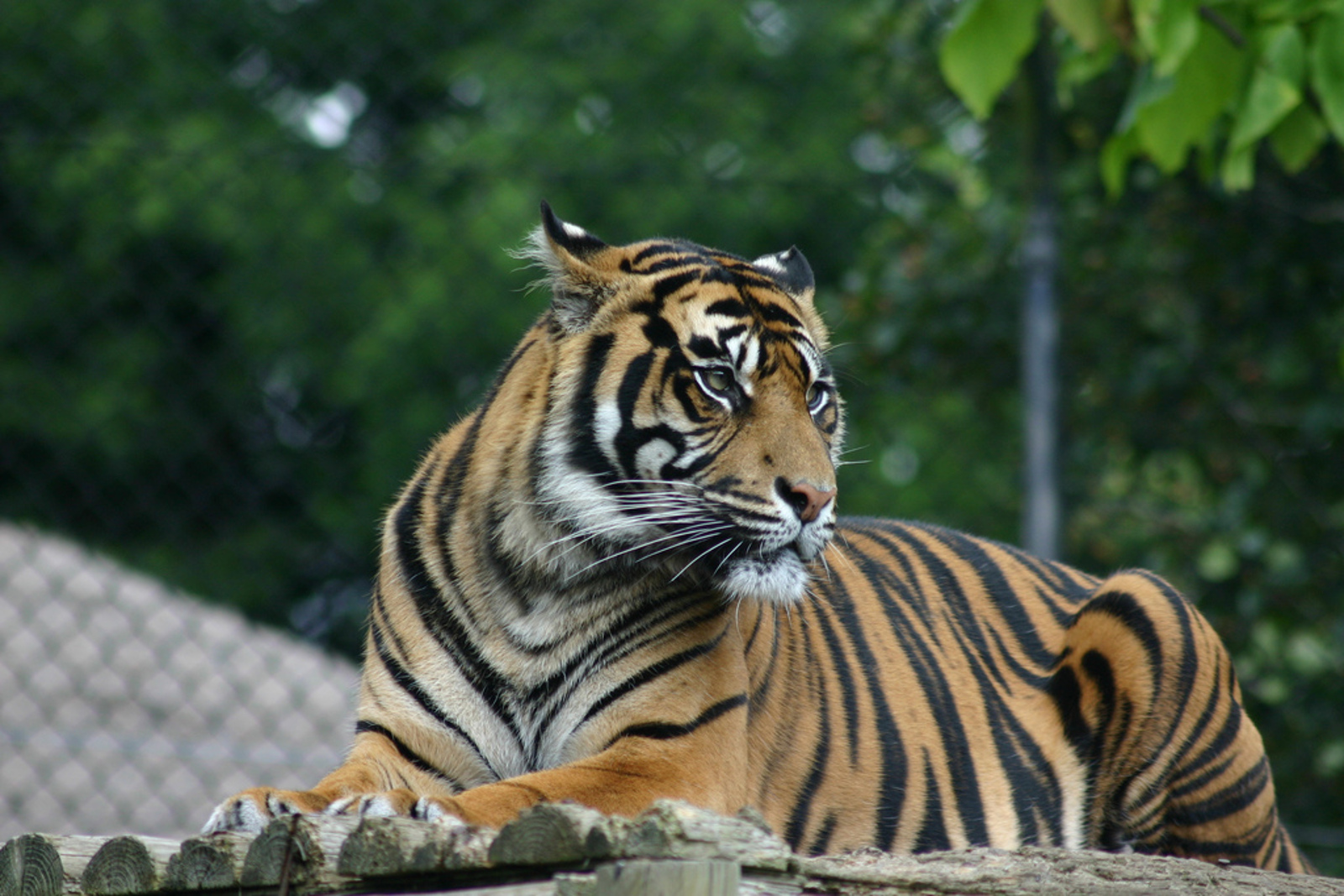 We’ve seen an enormous decline in the number of wild tigers in recent times. Years ago, tiger populations exceeded 100,000 individuals; as few as 3,200 remain worldwide today. This is due, in large part, to poachers and the illegal wildlife trade.

Killed for their skins, bones and teeth, tigers are a major target for poachers across the world. As we have seen these majestic animals disappear from the face of the earth, many countries have started to implement bans on the use and consumption of tigers and their parts to help protect this struggling species.

In 1993, China, one of the leading countries connected to the illegal wildlife trade, enacted a ban on the consumption of tiger bone; however, since then, they have received a significant amount of international scrutiny due to the lack of enforcement of this law. Additionally, though China has outlawed the consumption and use of wild tiger parts, commercial breeding of these animals for this purpose is perfectly legal.

Bred like cattle and housed in tight conditions reminiscent of the poultry industry, these endangered animals are treated like livestock. It’s estimated that today as many as 6,000 tigers are being held captive on these farms. Many of these tigers show visible signs of severe malnutrition and abuse.

The rationale behind allowing captive breeding facilities to supply consumers with everything from tiger skins to bones is to protect tigers from being poached in the wild. The argument here is that captive breeding actually serves conservation purposes. Sadly, this population of captive tigers persists for one sole purpose: to supply China with tiger parts. 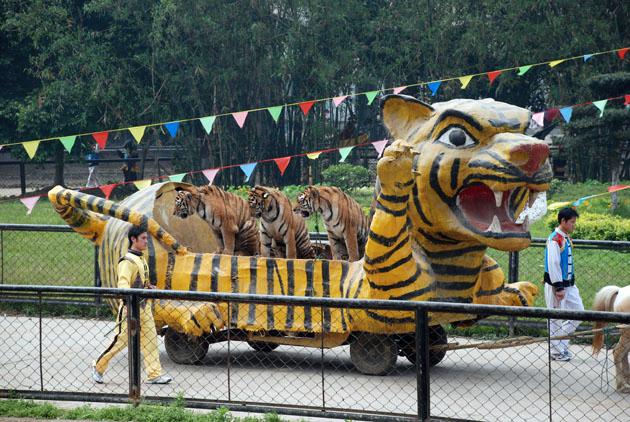 In China, there are as many as 200 operating tiger farms, some of which disguise themselves as sanctuaries for the tigers. Many of these farms are operated like safari parks and allow visitors to come in to see the animals perform tricks.

Some of the tigers are de-toothed or de-clawed to perform feats such as jumping through hoops, riding on the backs of horses and balancing on balls. Other performances involve releasing a live cow into an enclosure with multiple tigers. Tragically, because these animals were raised in captivity, they have little understanding of how to properly attack and kill the cow, and at the end of the show it is run over by a tractor.

When the animals are not being used for performances, they are kept in cages and “speed bred.” After a mother gives birth, her cub is immediately taken away so that she can breed again as soon as possible. According to the International Fund for Animal Welfare, tiger farms have a reproduction rate of 1,000.

When tigers die at the facility, operators are supposed to “seal” the bones and label the skins. Some of these products are licensed for domestic sale and a number of commercial dealers work with farmers; however, many are illegally laundered and sold on the black market. 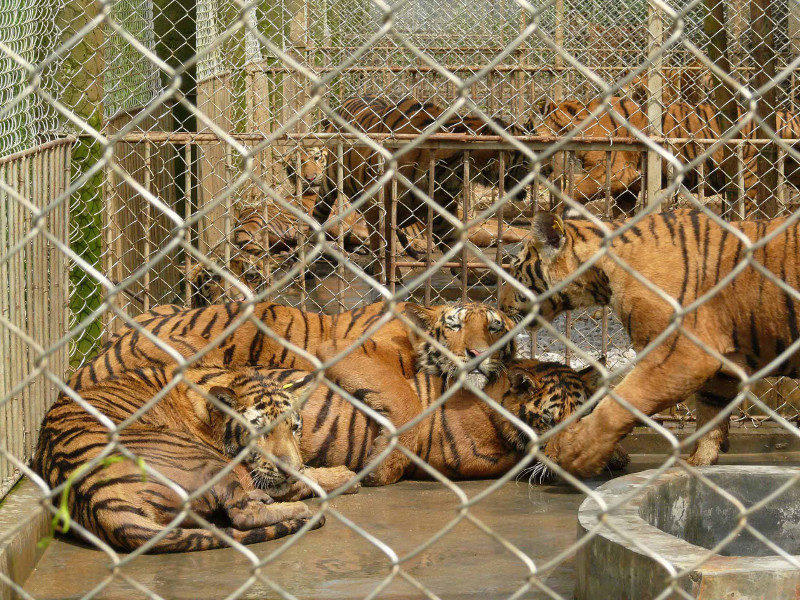 Every single part of the tiger is considered profitable in China. Displaying tiger rugs and stuffed animals outfitted with real tiger skin is seen as a symbol of status in China and many use these “exotic” decorations to accentuate their already lavish lifestyle. Slaughtering farmed tigers is considered a form of entertainment for those who are willing to pay the price. After these “canned” hunts, customers feast on the meat.

According to a report in the Washington Post, the rise of commercial tiger breeding facilities is actually encouraging a rise in the demand for tiger bone amongst the wealthy in China. Tiger bone is believed to have various medicinal qualities. It can also be infused in wine which is considered a particular delicacy; many tiger farms now have wineries right on their property. Once a tiger is dead, the animal can be harvested and the bone or skeleton of the tiger is soaked for a predetermined period of time before being bottled and sold.

Why are Tiger Farms Detrimental to Wild Tigers?

While tiger farms may have been created to slow the demand for illegally poached wild tigers, studies show that they hardly work to this end. Commercially bred tiger parts are more expensive than those that can be purchased illegally on the black market. Further, these farms take all of the stigma away from purchasing or consuming tiger in any way. What little concern consumers had for purchasing endangered tiger is completely done away with when they buy farmed tiger parts.

Many who support the captive breeding of tigers see this as a viable breeding population. Unfortunately, none of the tigers currently being bred on tiger farms are candidates for reintroduction into the wild, nor do the owners of the farms wish to see the wild population conserved. The owners of tiger farms make their living off of exploiting and abusing these animals while they’re alive, and profiting off of them again once they’ve passed.

The government’s hesitation to address tiger farming has only led to an increase in the notion that the tigers are more profitable dead than alive. With tiger parts as lucrative as they are in China, the conservation of the wild species has been neglected. More than anything else this mindset poses a major threat to the future protection of the tiger – both captive and wild.

There are more tigers living in backyards in the United States and on tiger farms in China than there are in the wild. Sadly, we’ve seen an increasing number of individuals defend both of these acts in the hope that these captive tigers will ultimately replace the wild population.

These captive tigers are more often than not severely abused, forced to live in small cages within close proximity to one another with little enrichment and no stimulation. Saving wild tiger populations does not entail breeding captive tigers. Continued pressure on the Chinese government (and the United States’ as well) to improve and enforce laws regarding possession of wild animals is imperative, as is educating the public, whether they use tiger parts or not.

In addition to spreading awareness about the plight of captive and wild tigers, you can help to protect these amazing animals by supporting the countless organizations working to sustain these native populations and minimize poaching of wild tigers.