How the Dairy Industry Has Unnaturally Altered the Life of Cows 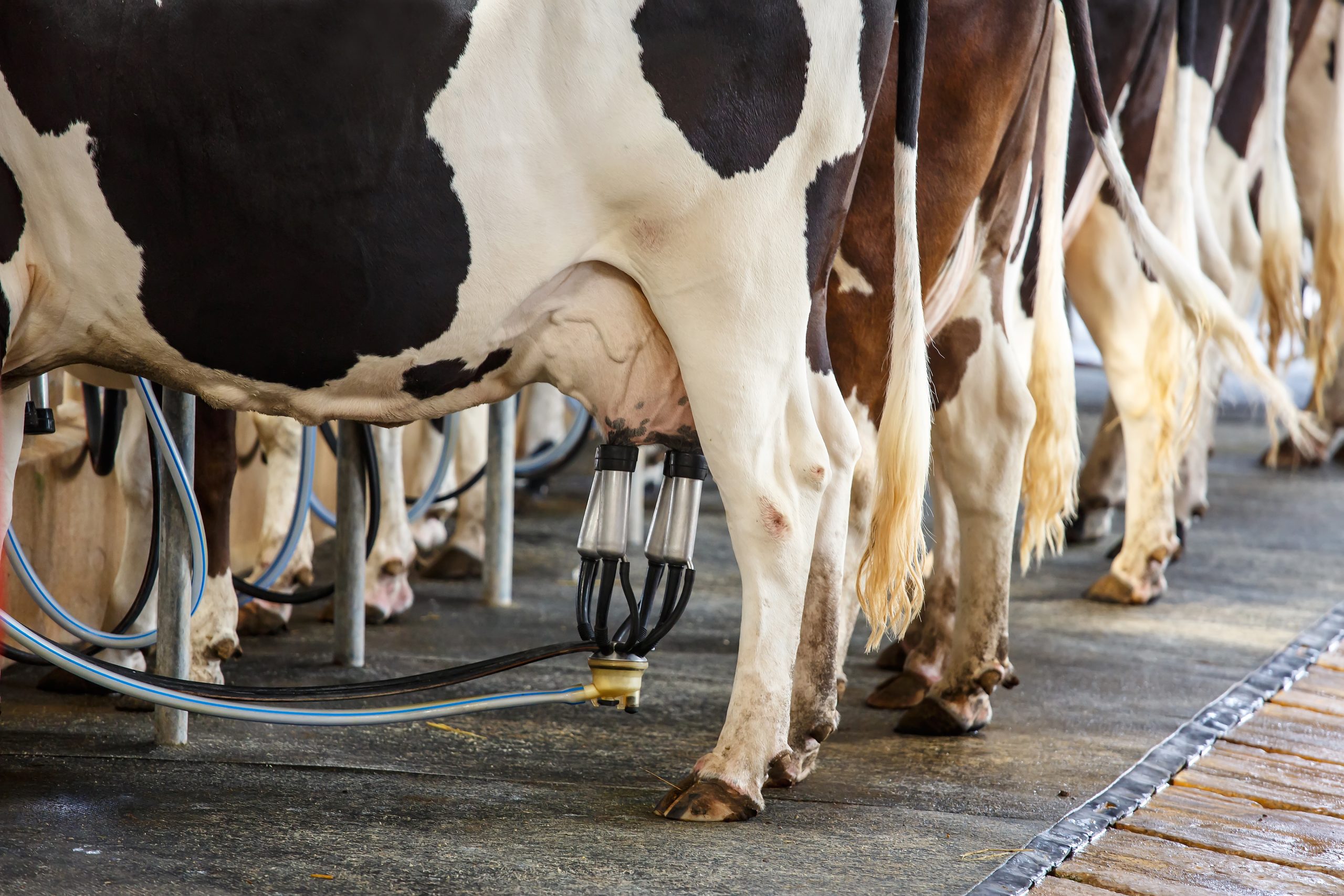 In the world of animal agriculture, the dairy industry is often considered the lesser of all evils. We are pretty much trained to associate dairy production with happiness. Cow cartoons on yogurt cups are always smiling, California dairy cows have their own commercials where they literally sing and dance with joy. Why wouldn’t have any reason to believe that the life of a dairy cow is anything but fabulous and borderline euphoric?

While we wish that life for dairy cows was truly this way, the reality is much, much bleaker. In the U.S. alone, dairy farms produce about 196 billion gallons of milk a year. To reach these high yields, the dairy industry has transformed into an industrial operation where cows are kept in small, confined areas, continuously impregnated and milked. Today’s factory-farm raised dairy cow produces around 100 pounds of milk a day – that is nearly 10 times more than the average cow would naturally. All these factors combine would hardly make for the elated cows we see on billboards.

One part of the dairy equation that often gets forgotten is what happens to the calf. In order for a female cow to produce milk, she has to have recently given birth. In nature, the milk produced by the mother would go to feed her baby, but in the dairy industry this milk is diverted to humans and the baby seems to disappear from the equation. To give you an idea of how the dairy industry has fundamentally altered the natural life cycle of a cow, let’s look into the life of a dairy calf.

The average lifespan of a dairy cow is five years. During those five years of life, the cow is impregnated every year with only a few short months rest in between. The gestation period for cows is nine months, like with humans. The bond between a mother and calf can be forged as quickly as five minutes after birth. When a dairy calf is born, they stay with their mother for a few hours, then they are taken away. A calf who is not born into the animal agriculture industry will stay with their mother and nurse for up to a year.

After birth, the life of a dairy calf can go one of two ways, largely depended on the gender of the baby. If the calf is a male, he will be placed in a veal crate where he is tied at the neck and restrained to prohibit all movement. Because male cows will not grow up to produce milk, they are considered “waste” to a dairy farmer and usually sold to produce veal.

The calf will live in the crate for up to 20 weeks, fed only a milk substitute that does not contain iron or fiber. This diet makes the calves anemic, which results in the pale, flesh coloring of veal cuts. Calves are only taken out of their crates when it is time to transport them to slaughter. Most cannot walk or support their own weight because their muscles are so underdeveloped. Around one million male calves meet this fate each year.

A female calf will be raised to become a dairy cow, just like her mother. But first, she has her tail docked, or cut short, at around six weeks of age, often without any pain medication. This can cause permanent nerve damage which will lead to chronic pain for the cow. At around six months old, the calf will be “de-budded” a process that involves burning out the bone that will grow into horns. Since cows are kept in such close quarters, horns can be dangerous!

A dairy cow will have her first calf when she is about two years old. After she gives birth, she will experience the pain of having her first child taken away from her. A few hours after this, she will be put on a milking machine. She will produce milk for about 10 months after giving birth, but after three weeks time, she will be “ready” to conceive another child.

The average industrial dairy farm will house around 700 cows, all indoors in a milking parlor. Most cows spend their entire lives inside on hard concrete floors, milked three times a day.

In order to ensure the cows produce the most milk possible, they are often given growth hormones in their feed. The overproduction of milk often leads to mastitis which is a painful inflammation of the udder. It is estimated that 30-50 percent of dairy cows suffer from this ailment. On organic farms, cows are not given antibiotics to treat the infection.

In her first year as a milk-producing cow, it is expected that this young calf will produce 20,000 pounds of milk. The intense metabolic drain that producing this volume of milk every day is extremely draining on the cows immune system which makes her more susceptible to disease. The experience of standing on a hard concrete floor and constantly being weighed down with milk, or a baby, leaves many cows lame. It is estimated that 75 percent of “downer” (unhealthy, immobile) cows come from the dairy industry.

An adolescent cow who is not raised on an industrial farm will be allowed to graze in the pasture and eat grass, rather than grain feed pumped with hormones and antibiotics. Cows are highly social animals, so it is likely that this young calf would spend her days in the company of her friends – cows, like humans have best friends. It is unlikely that this cow will develop mastitis or foot problems, pending extraneous circumstances.

Most cows in the dairy industry are sent to slaughter by the age of five years old, either because their milk production has slowed down or because they are too ill to be productive. Around 40 percent of cows will be lame by the time they reach slaughter. These cows are typically used to make low-grade beef, pet food, or soup.

The natural lifespan of a cow can reach up to 25 years old. These cows can grow to weight up to 2,300 pounds, much larger than their factory farm counterparts who only reach about 900 pounds. During their life, cows will produce milk for around eight or nine years of their life – depending on how many calves that rear. The calves of these cows feed three times a day and there is no threat that the mother cow will “explode” or be made overly uncomfortable if a human does not intervene for milking.

The Makings of a Real Happy Cow

When put side-by-side, the definition of what makes for a truly happy cow is readily apparent. Cows are sentient, intelligent and emotional beings that experience pain and fear in life in a similar manner to humans. The life of a calf in the dairy industry is vastly different from that of a cow who is allowed to experience life as nature intended. We have genetically manipulated and manufactured the life of a dairy cow for our own gains and when you look at the sad product, it seems this industry is hardly free from the cruelty associated with meat production.

Lucky for us, there is no reason that we can’t remove our own contribution to this cruelty. Although the dairy industry tells you that humans need cows milk for calcium, this is hardly the case. Check out these awesome non-dairy sources of calcium. And remember, the people who’ve fabricated the myth that milk equals strong bones, also told you dairy cows were happy…