Dairy and calcium have had “in a relationship” in their Facebook statuses for ages. They’re such a famous couple that they’re rarely mentioned without each other, gracing the cover of ad campaigns across the world and dietary recommendations in publications everywhere. They’re the Benifer of the nutrition world. Should we start calling them Dair-ium?

Not so fast. As it turns out, all the hype around their relationship is a carefully orchestrated PR stunt put on by their people to make them look like the perfect power couple. In reality, these two are so completely dysfunctional together that we think it’s about time that calcium’s friends got together and had a talk with her about the toxicity of this relationship.

You see, calcium is a powerful and important mineral that promotes bone and teeth strength while regulating heart rhythms, transmuting nerve impulses and promoting proper blood clotting. The high, acidic protein content, low vitamin content and sky-high sodium content of dairy are just holding calcium back from shinning to the best of its abilities. It’s time to face facts, dairy is running with the wrong crowd and it’s time for calcium to move on to greener pastures … and by greener we mean plants.

1. The protein in dairy is totally picking through calcium’s purse and stealing her alkalizing properties.

Bones constantly remove small amounts of calcium from themselves and replace it with new calcium, a process known as remodeling. It’s vital to have enough calcium in our system for this process so that our bones don’t become depleted when remodeling occurs. Animal protein is comprised of sulfur-based amino acids that are highly acidic and require the body to use calcium to restore our blood alkalinity. For every gram of protein we consume, we lose one milligram of calcium in an effort to balance our pH.

An ounce of cheese contains 296 mg of calcium and 5 grams of protein, while a cup of collard greens packs 230mg of calcium with just 1 gram of protein. Sounds like a much better fit, don’t you think? 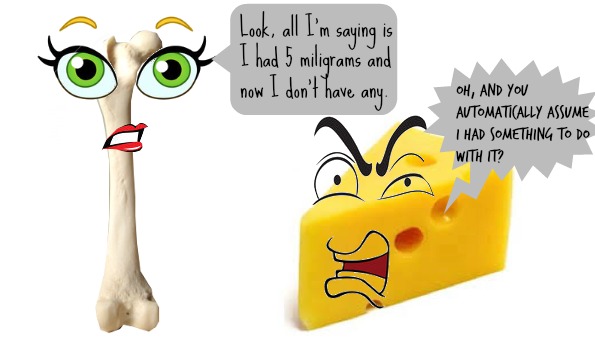 2. Dairy can’t give calcium what it needs, which in this instance, is vitamins D and K.

Calcium needs vitamin D for maximum absorption as well as vitamin K for the stabilization of calcium in the formation of bone, two things that dairy just doesn’t have on hand.

Unless fortified, there is only trace amounts of these minerals naturally occurring in milk and cheese. In fact, this is the case for most foods across the spectrum. Humans, vegan or no, can synthesize their own vitamin D when exposed to the sun, get it with supplementation or by eating fortified foods. Rarely do any of us get it from food alone.

Conversely, vitamin K is abundant in leafy greens, with just 1 cup of kale supplying 684 percent of your daily requirement! 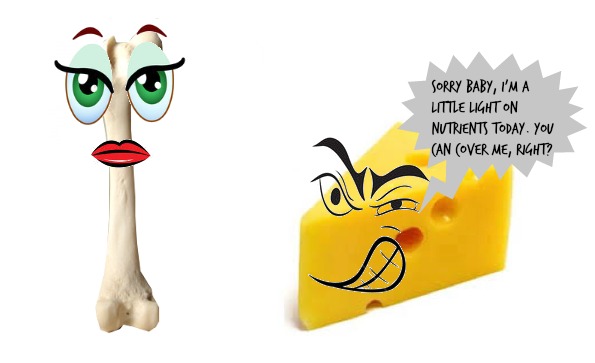 3. Dairy is friends with lactose, which throws parties in your intestines and insults your stomach.

Approximately 65 percent of the human population has a reduced ability to digest lactose, the naturally occurring sugar found in dairy products. Symptoms of lactose intolerance include bloating, abdominal pain, flatulence, nausea and diarrhea. Sounds like a blast … and by that we mean it sounds awful and reason enough to look elsewhere for your calcium fix. 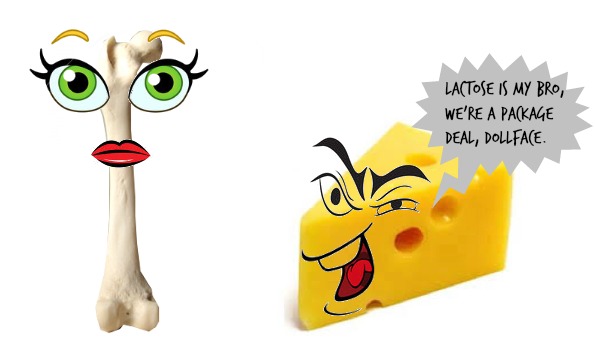 4. Casein also hangs out with dairy, with all of its addiction problems.

Casein is a protein found in dairy that, like lactose, is difficult for many people to digest. The symptoms mirror those of lactose intolerance, including the bloating and the pain and the diarrhea. An added fun fact with casein though, is that it’s addictive, releasing casomorphins during digestion that attach to opiate sensors in the brain. This results in a heroine-like reaction, making dairy incredibly hard to give up. Considering that casein is also suspected of “turning on” existing cancer genes, it’s a habit that needs to be kicked sooner rather than later. Man, dairy has some totally unsavory friends. 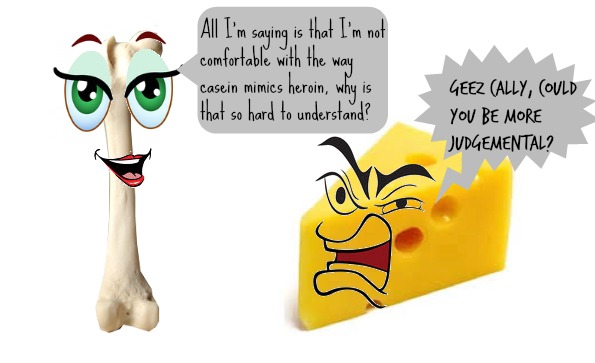 5. Dairy is texting sodium behind calcium’s back.

Excess sodium in the diet must be excreted by the kidneys, which takes calcium right along with it. For every gram of sodium excreted, between 23 and 26 milligrams of calcium are lost as well. The dietary guidelines for Americans recommend keeping sodium intake below 2300 milligrams per day (1500 if you’re aged 51 or older). That may sound like a lot, but most Americans clock in at nearly 3400. Considering that a single ounce of cheese contains 468 milligrams of sodium while a whole cup of baked sweet potato has only 73 milligrams (and 40 milligrams of calcium, might we add), dairy has too many elements on the back burners. 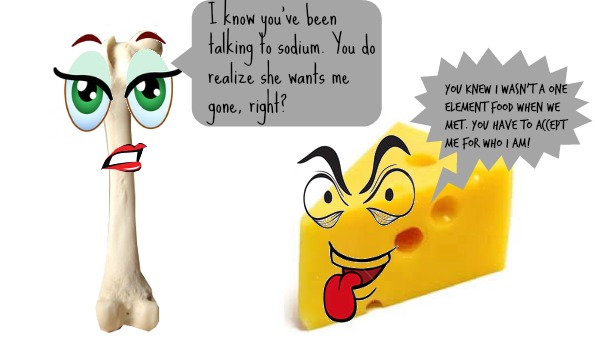 It’s time for calcium to go on “Plenty of Kale” and hook up with a more suitable life partner.

Calcium can do better, that much is obvious. While dairy products do contain calcium, the other baggage it comes with just doesn’t make it the companion that calcium should be hitching its wagon to.

The great news is, there are plenty of plant-based prospects out there that supply calcium without addictive chemicals, excess sodium, or indigestible components. Foods such as broccoli, butternut squash, leafy greens (except for spinach, whose calcium content isn’t as readily absorbable as the others), chickpeas, navy beans, soybeans, pinto beans and a variety of fortified foods from tofu to rice milk have the calcium we need, as well as a host of other nutrients that dairy just doesn’t have.

Calcium works hard for our bodies. Its a loyal and trusted friend. We just want it to be happy, you know?