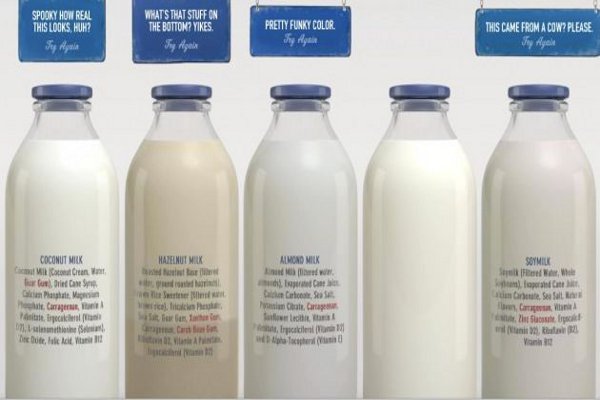 Looks like people are finally wisening up about the nutritional value of cow’s milk (or lack thereof) and consequently switching to plant-based milks. This is now abundantly clear from the fact that the dairy industry (yes, that multi-billion dollar industry) has launched an entire ad/smear campaign attacking plant-based milks.

The whole campaign is focused on the theme that only cow’s milk is “real milk” and other milks are “not natural,” which not only illustrates how pathetic the dairy industry is, but also how gullible they think consumers are.

As Andy Bellatti points out on his blog Small Bites, the campaign describes coconut milk as “spooky” for looking so “real” when compared to cow’s milk. Hazelnut milk is supposed to be weird because it has “stuff on the  bottom.” Almond milk apparently has a “phony” color and soy milk is accused of not coming from a cow! REALLY? Thank you for enlightening us!

You know what’s “spooky?” The horrific ways cows and their offspring are treated in the dairy industry. And you know what’s “not natural?” Drinking the milk of another species!

Want to know all about the health reasons why you should avoid cow’s milk? Read this and check out our extensive guide to plant-based milks.