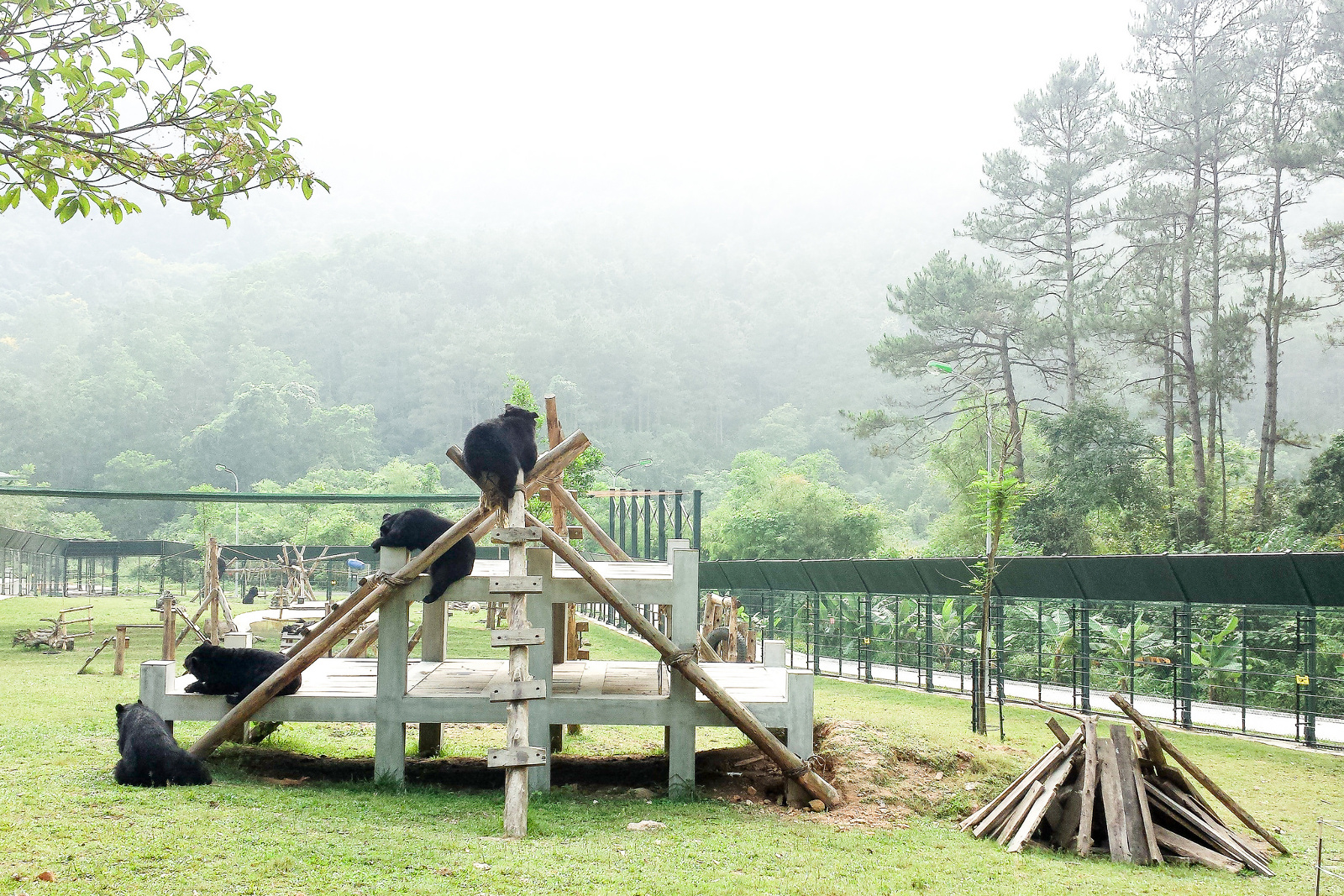 Animals Asia’s supporters know we are committed to ending bear bile farming, to stopping cruelty to cats and dogs, and enhancing the welfare of captive animals in zoos and safari parks. But the fact that it was all inspired by a single moment is less well known.

That moment came in 1993 in a dingy basement room in southern China. The room had row after row of rusty cages. Confined within them were several Asiatic black bears. The bears stared bleakly out from their prisons with eyes devoid of hope and filled with fear.

That was the moment when Jill Robinson, then a consultant for the International Fund for Animal Welfare, first walked into a bear bile farm.

“As I walked around in shock, looking at bears with scarred and skeletal bodies, smashed teeth, and abdomens pierced with metal catheters, I must have brushed too closely to a cage, and felt something gently touch my shoulder,” she explains. “Turning around in fright, I came face to face with a female moon bear who had her paw through the bars of the cage. Rather than taking the sensible course and leaving her alone, it just seemed the most natural response to hold her paw. Instead of lashing out, instead of swiping with those razor-sharp claws, she simply squeezed my fingers.”

Jill continues, “She had every right to hurt me, to exact revenge on behalf of her species for the cruelty bestowed upon them by mankind. But she did not. For just a few seconds, I looked into her beautiful brown eyes, knowing instinctively that there was nothing I could do to help her. But in those few seconds, I also knew that this individual bear, this rather surreal experience as a whole, had started something that would change my personal and professional path forever.”

Jill never saw that bear again, but she never, ever forgot her. 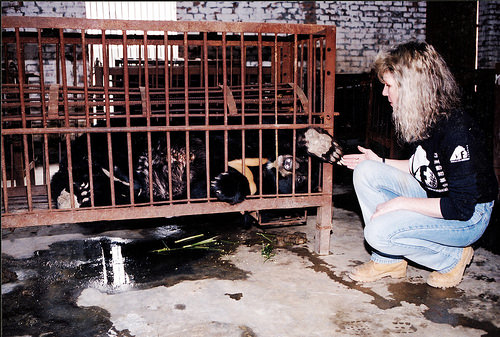 The Beginning of a Movement

The trip was a fact-finding one and had been prompted by a call from a journalist friend who had just returned from a visit to a bear bile farm in China. Knowing nothing about Asiatic black bears – more commonly referred to as moon bears because of the gold crescent on their torso – she was intrigued to find out more.

She was there essentially undercover, as someone more interested in the bile than the bears. But, as the farmer continued to boast of all the ailments bear bile could cure she and two friends, slipped away and took time to look around.

“The bears were staring forlornly watching from their crush cages making nervous ‘popping’ sounds every time I approached them. They were clearly anticipating something terrible was going to happen. One look, and I knew why they were afraid. They had scars running three or four feet long along their bodies. Their teeth were worn away from years of biting the cage bars. Teeth and paw tips were deliberately cut away to make them less dangerous to handle. And, worst of all, many had metal catheters poking out from infected holes in their abdomens,” explains Jill. 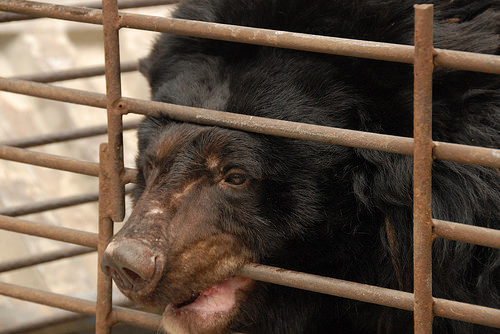 Even though Jill had had several years’ experience working in animal welfare in Asia, she had never seen such shocking treatment of animals.

In the days following that fateful visit and the publication of the photographs she had taken, Jill was introduced to David Chu Yu Lin, who had been made Honorary Advisor to the China Wildlife Conservation Association (CWCA) in Beijing – a government department directly responsible to the State Forestry Administration.

“Soon after that I had a meeting with members of the CWCA and a very long process of negotiation and trust building began. I also set about researching as much about bear bile that I possibly could. After all, how could I even begin to tackle such an established cultural practice unless I knew every aspect of it? Credibility was key. I was shocked early on to discover that bear bile – or rather, its active ingredient, ursodeoxycholic acid (UDCA) – does have medicinal value.” 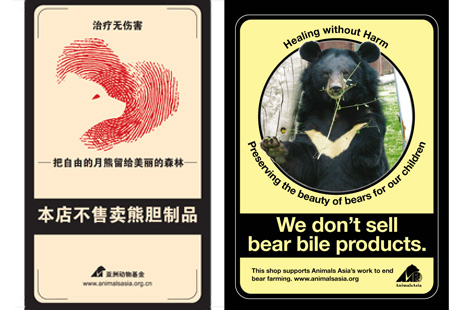 Further research showed that many TCM doctors believed that bear bile could be replaced with a combination of herbs for the various illnesses it treated, and that UDCA could be synthesised too and made both cheaper and more readily available. The challenge was how to convince a continent steeped in centuries-old wisdom and practices.

The research helped build a network of contacts who would back the fight to end bear bile farming. These included government officials, academics, professionals, traditional medicine doctors, pathologists, journalists and celebrities. Best of all was the realisation that a significant proportion of the general public were supportive of helping in the protection of these endangered species and wanted bear farming to end.

Throughout the mid-90s, Jill spent more and more time campaigning to bring about change and end the use of bear bile. She realized the only way she could build on the already-sizeable achievements was to set up a dedicated charity, or Non-Governmental Organisation (NGO) for that purpose. She and four founding members – John Warham, Boris Chiao, Gail Cochrane and Winnie Luk – formally established Animals Asia on August 8, 1998 (deliberately choosing the most lucky numbers in China – 8/8/98). 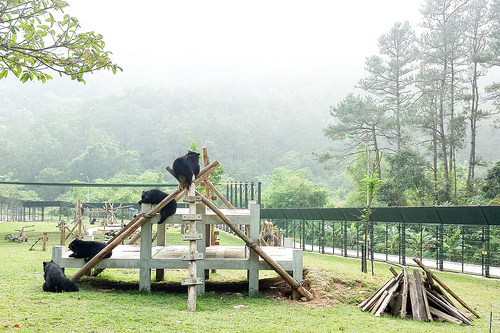 Since then Animals Asia has rescued more than 500 bears, caring for them at award-winning bear sanctuaries in China and Vietnam. An even bigger impact has been the growth of awareness.

Peter Li, Associate Professor of East Asian Politics at the University of Houston-Downtown and China Policy Specialist of Humane Society International, believes that without Jill’s intervention the cruelty involved in bear bile farming might have remained hidden for years to come.

“She single-handedly alerted the world to this shocking example of humans’ gross inhumanity to an intelligent animal species.” 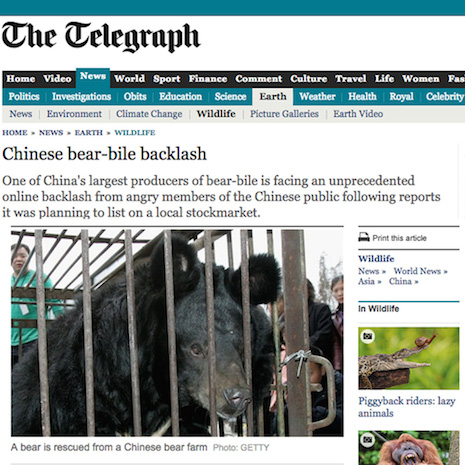 By 2011, the secret became a national outrage.That was the year that saw an explosion in public support for the campaign to end bear bile farming. It was caused by an industrial bear bile farm announcing its intention to float on the stock exchange. In the aftermath, a poll revealed 87 percent of the public opposed the industry – literally hundreds of millions of Chinese people.

In one month alone, Animals Asia featured in 6,243 news articles in China. The floatation was ultimately unsuccessful finally being cancelled in 2013 with wildlife activists claiming an historic victory. 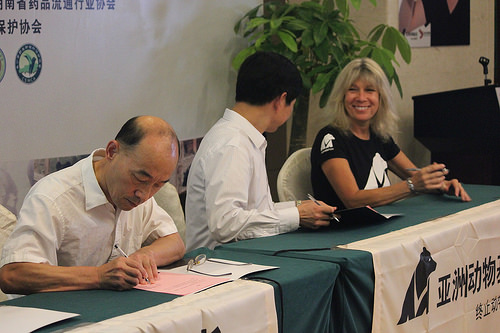 In addition, through the Healing without Harm program, a growing number of Chinese pharmacies have refused to stock medicines that include bear bile.

Since those early days Animals Asia has grown to become a wider voice for animals in China and in Vietnam. In particular working with grass roots organisations and authorities to fight cruelty to cats and dogs – including the meat trade. In addition, Animals Asia’s work to assist captive animals has led to better conditions in zoos and safari parks as well as an on-going fight to push for an end to animal performance.

“It’s important we keep looking forward, but sometimes, in order to see how far we’ve come, you have to look back. This is how it all started and until there’s an end in sight, our work goes on. What has been incredible is how many people have joined us in this journey. Cruelty happens in the dark and now millions of people are helping to shine a light on it. We need everyone to keep believing that cruelty can end – because it can. The most important chapters of this story are still to be written”