“Oh no, it’s bad. And she’s already running!” Even from a distance of a hundred feet, Ganpat can see that the dog they’ve been called to rescue has a big blackish hole at the back of her neck. He recognizes instantly that it’s a wound made enormous because it is filled with worms that eat living tissue: maggots!

But catching her isn’t going to be easy. She’s already trotting. Often dogs with painful wounds don’t lay still for long, as if they’re trying to escape the horrible hurting. And as Animal Aid Unlimited’s rescue ambulance approaches, Ganpat and Praveen can see that catching this girl is a life and death issue. One failed attempt could cost her life. If we can’t rescue her now she may run off into another neighborhood and never be seen again.

The nets are ready — sturdy metal poles with a deep basket of rope netting. They can’t risk the dog smelling the ambulance. It carries with it the scents of many other dogs which their noses pick up even from a great distance.

The rescue team has to linger far behind her. But then: an opportunity. She suddenly turns left into a cul-de-sac about 50 meters long. The far end of the lane is closed, meaning her chances of escape are now limited.

The ambulance quickly pulls over. Ganpat and Praveen don’t even have to discuss their strategy. Armed with Parle-G biscuits, Praveen pretends to casually stroll along looking away from the dog as Ganpat silently holds the net pole many paces behind. Praveen manages to get within about 20 feet from the dog. He sees that the wound is the size of a baseball and nearly as deep. She’s desperately thin and she’ll certainly die without urgent treatment.

She bends to gently nibble a morsel. Praveen’s heart soars. She is afraid, but even more, she is hungry, and when she starts to eat we know we have a chance to catch her.

As her trust grows, she begins to concentrate on this gold mine of food. That’s when Ganpat knows he has to make his move, and he has to get it right. Like an athlete scoring from a free throw, Ganpat’s years of practice save her life:  he casts the net exactly right and she’s IN! 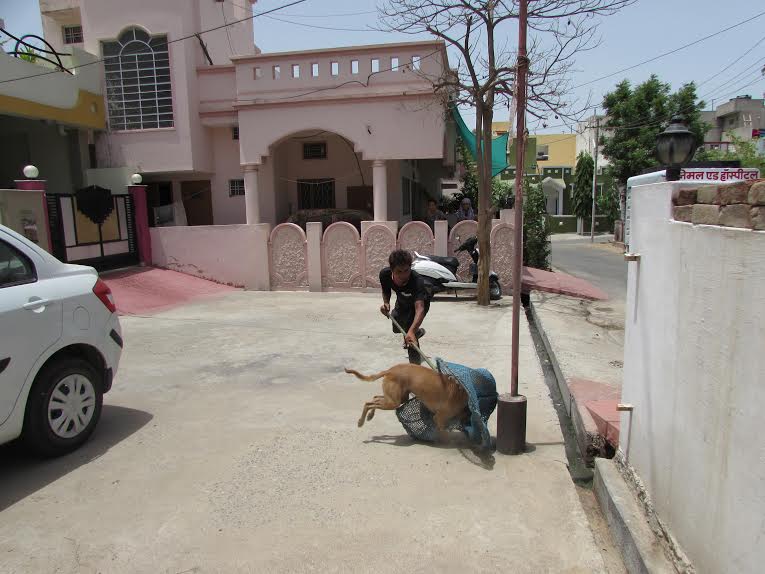 This is the first day of her recovery.

The ambulance already has several other patients — a two-month-old puppy with a broken leg, a pigeon unable to fly, a male calf who someone must have abandoned as “useless” and a 300-pound-cow who was unable to stand, her shoulder dislocated from a reckless cement truck. Ganpat and Praveen had to flag down a dozen neighbors to help lift her into the ambulance. Luckily, the road was a busy one and men gathered around happy to help, and using wooden poles, lifted her into the ambulance.

Without the help of Animal Aid, many of these dogs and other animals would be left to suffer on the streets. 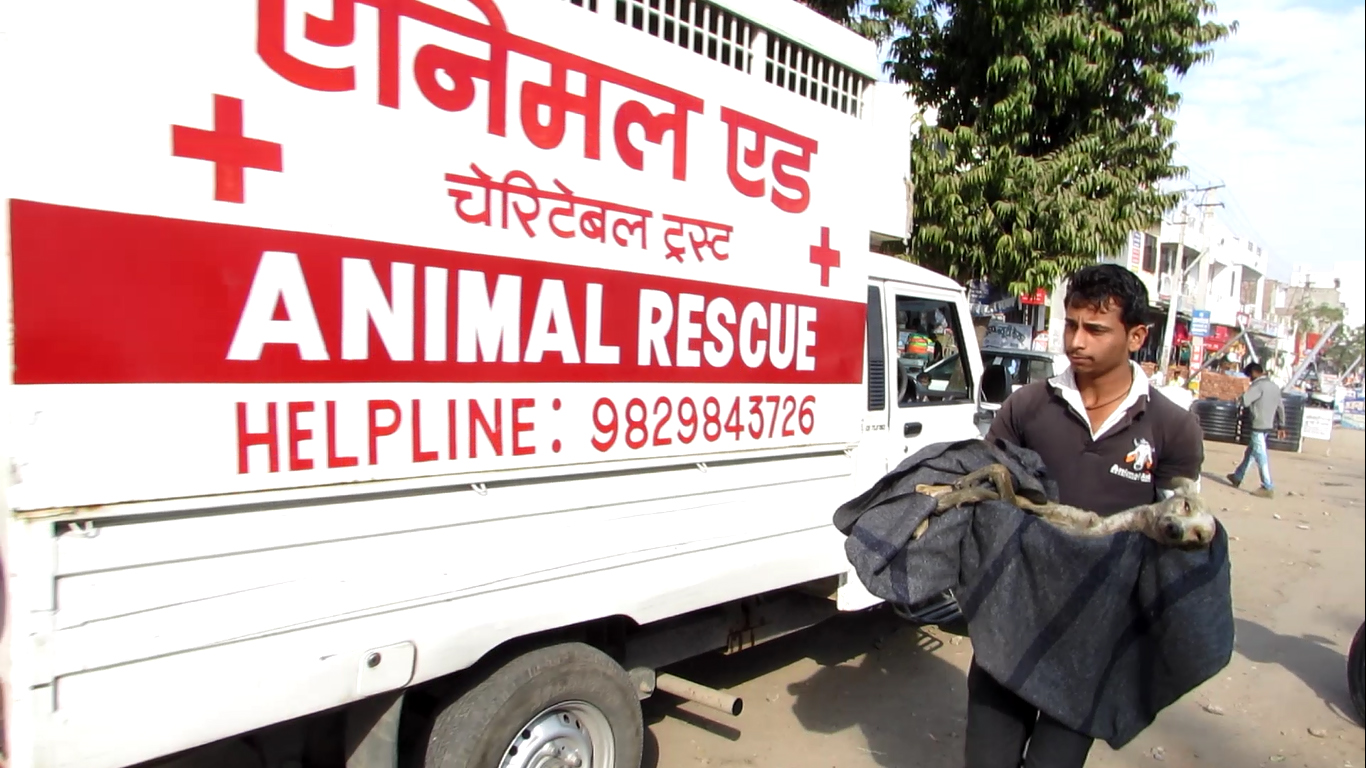 It’s a full house now and the guys are tired and hot as they head back to the Animal Aid hospital, about eight kilometers from their final rescue. It’s 2 p.m. and they haven’t stopped once since leaving the shelter at 8 AM.

Rescued Animals Are Given The Care They Desperately Need

On arrival, the animals are ushered into their various sections — the bull calf and cow to the large animal paddock, the puppy to Puppytown, and pigeon to a large enclosure for birds and the wounded dog to the trauma center. Each area is staffed by a highly experienced veterinary nurse and caregivers who follow clear, pre-established protocols for each case.

Mangi Lal is the nurse in the trauma center. As Ganpat carries in the dog, Arjun, a caregiver, hurries to the treatment table and wipes it down with disinfectant, and readies the treatment tray. Mangi Lal, who has worked with Animal Aid for almost 10 years, sizes up the scope of the problem.

The first order of business is to apply a powder into the wound to kill the maggots and get her started on IV fluids — she is severely dehydrated. Tomorrow, the maggots will be removed and the wound can be thoroughly cleaned and debrided. After that, her wound will be cleaned and bandaged every day and should take about a month and a half to fully heal. She will be vaccinated against rabies, other viruses including Distemper and Parvo, and will be spayed.

In the large animal section the cow who can’t stand is shifted onto a large mattress to keep her comfortable and is given IV fluids, and the abandoned baby calf is given milk from a bottle — he has been starving to death and doesn’t seem to know how to suckle any more, so we have to be very patient and try throughout the day to encourage him to suckle the bottle.

Animal Aid rescues all types of animals from the streets of India, especially those gravely injured. 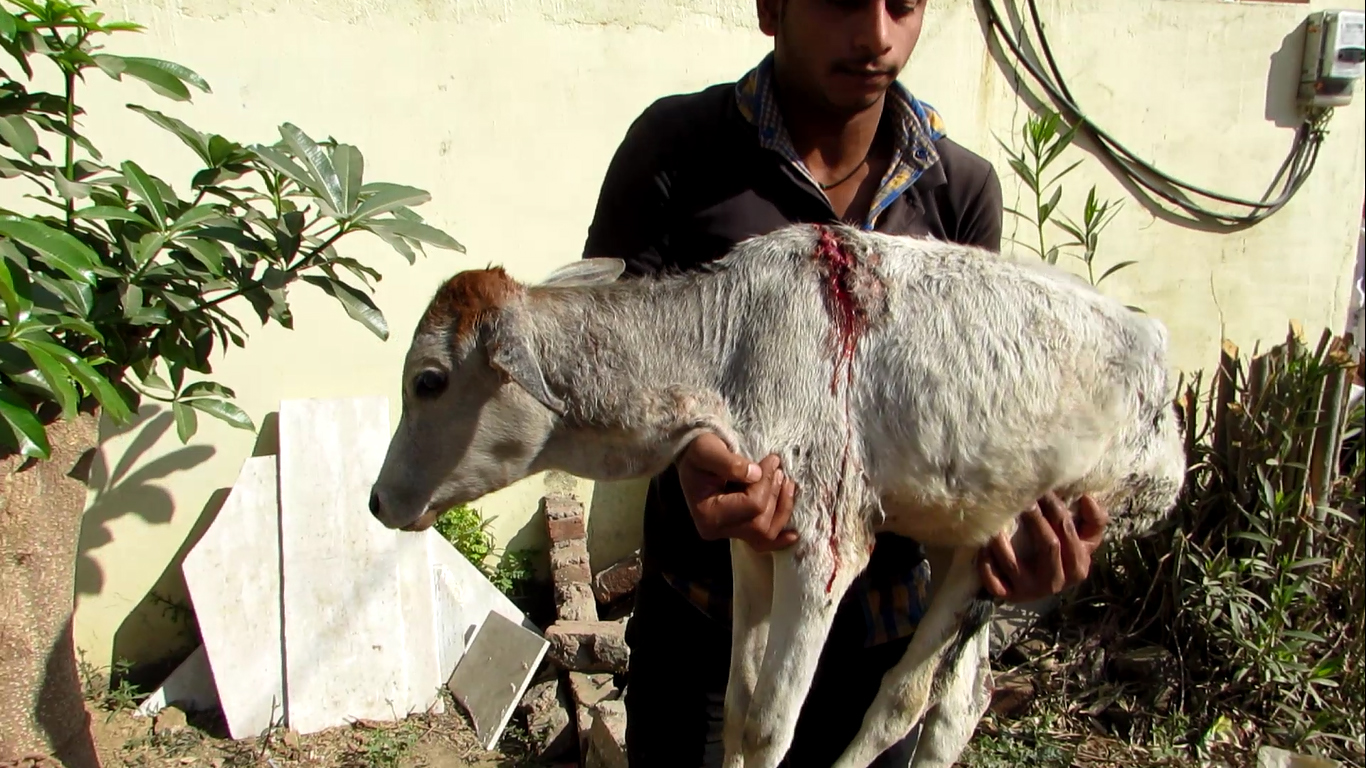 Meanwhile, the rescue team has headed out for another animal in need. It’s a busy day — the dispatcher has already counted 25 emergency requests and it’s 4 pm. Two rescue crews are on the road and the day’s admissions looks like it will top 20. Animal Aid’s vet has been in surgery from 11:30 — just after morning tea — until 3:00. Her work included amputating a dog with a mangled leg and three neuters.

Every day, 15-25 new angels are welcomed in the gates of Rajasthan’s busiest street animal rescue center. In a state of 70 million. there are only three such centers each hundreds of kilometers apart.

The job of a rescuer is never done. There are always animals in need. 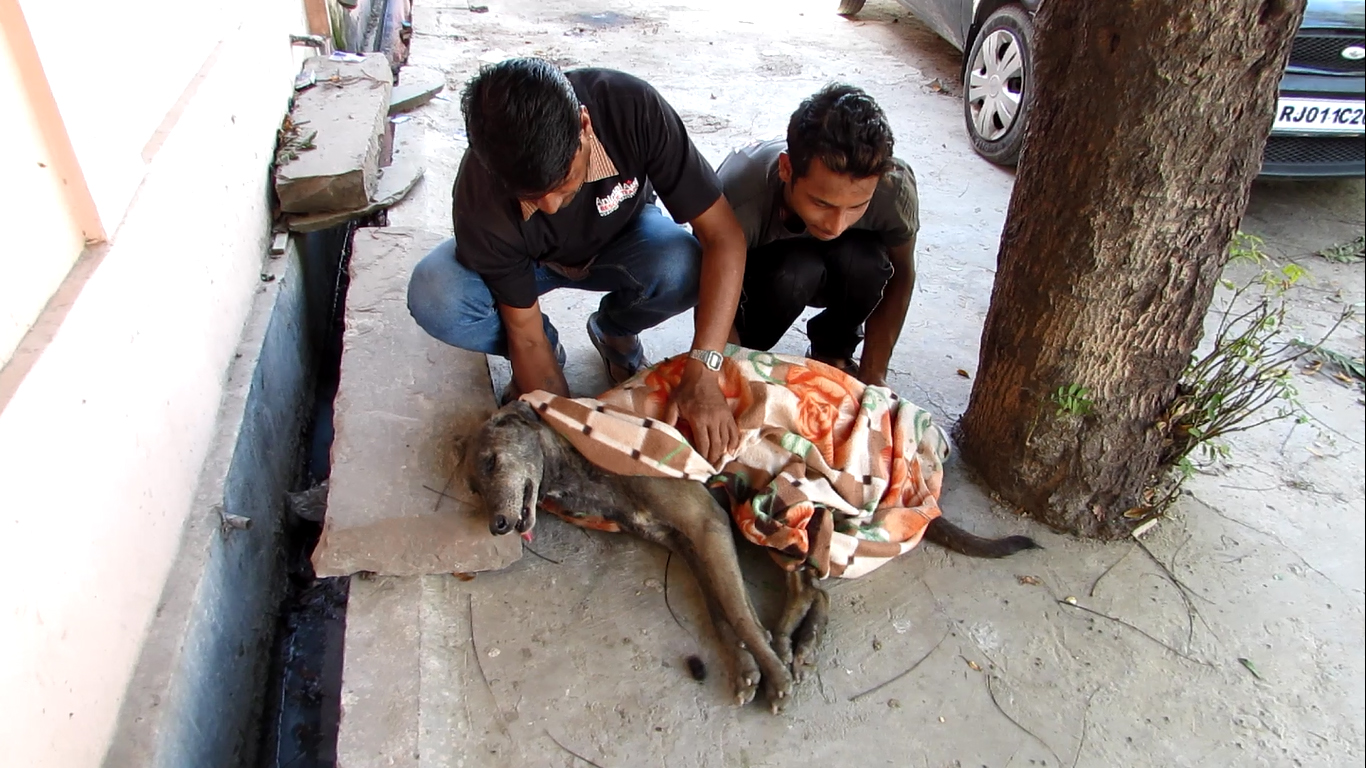 Each of the 60,000 animals who have been treated by Animal Aid in the last 13 years was saved by a caring Udaipur resident. Many animal rescues are achieved because of the help of neighbors and passers-by. Donkeys, cows, goats, cats, dogs, each with a story, and many with a story that involves the kindness of an Udaipur resident who has never had a pet, may never have even touched a dog in their whole life, but who has a deep reverence for the life of the free four-legged spirits who live on the streets of India.

When the day is done, it’s 10 pm and the night shift takes charge, performing continuous rounds of the 400 animals in the shelter to refill water, clean enclosures, make sure everyone gets a good night’s sleep. For now, the phones are quiet as Udaipur sleeps, but in the morning, the daunting and wonderfully rewarding challenge of street animal rescue will begin afresh.