Art as a Weapon Against Poaching! Asher Jay Takes on the Illicit Wildlife Trade 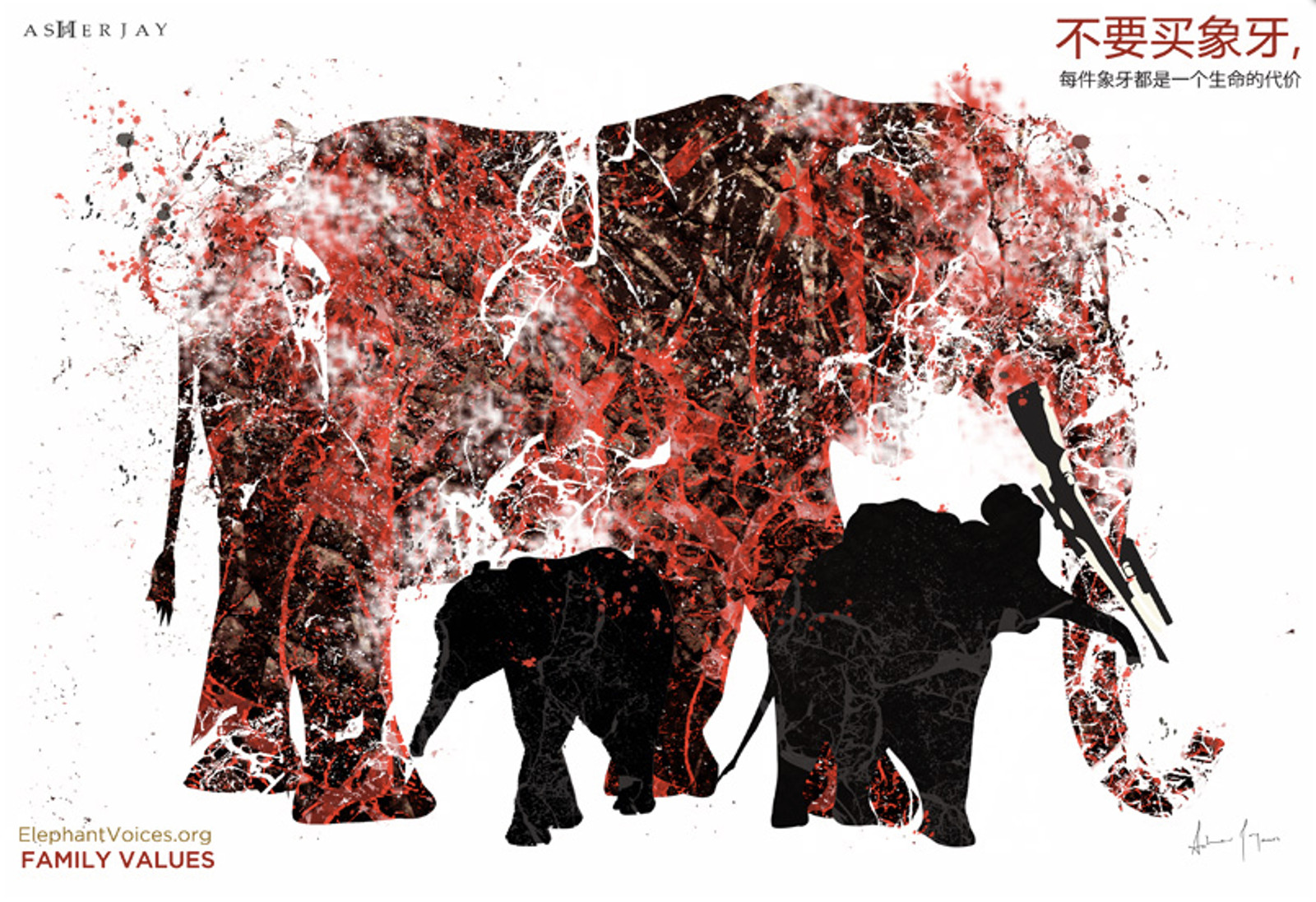 The illegal wildlife trade grosses around 20 billion dollars annually. Targeting the world’s most endangered species for their tusks, horns, fins, and fur, the trade is costing the planet exponentially more than it is worth in a dollar amount. It is estimated that in the past 40 years, nearly 52 percent of wildlife have disappeared from the face of the earth. This is no small statistic and should be taken very seriously, especially considering the fact that humans are largely to blame for this loss. The ivory trade alone leads to the death of between 35,000 and 50,000 elephants, which has caused the population of African elephants to linger right on the edge of extinction. All for the sake of making jewelry, trinkets, statues, and other insignificant items … and the elephant is hardly the only animal who has been subjected to this cruel trade.

More than ever, it is clear that the wildlife trade needs to come to an end, and the best way to see this happen is to spread the word about what is happening to the world’s wildlife. Artist, Asher Jay, has made raising awareness about wildlife poaching and the need for conservation her life’s mission.

Ending Wildlife Poaching With a Paintbrush

From a young age, Jay felt a deep connection to wild animals, to the point where she hardly discerned a difference between herself and the animals of the world. In a TED talk, Jay explains that as a child she fancied herself to be a bat because of her oversized canine teeth. A few years later, she learned that fruit bats were being bred and produced for human consumption in Guam, and could not reconcile how a person would want to consume a creature that she had “been” not long ago.

With that, Jay’s deep connection with the wild was forged and she has been able to channel this connection into her conservation art. Her works spread the message about what is happening to the creatures of the wild while empowering people to act out for their protection.

Of her series on wildlife trafficking, Jay writes, “Wildlife trafficking is the scourge of our times; its existence illustrates the corrosion of humanity, the loss of values, disintegration of integrity and disengagement within our selves.” 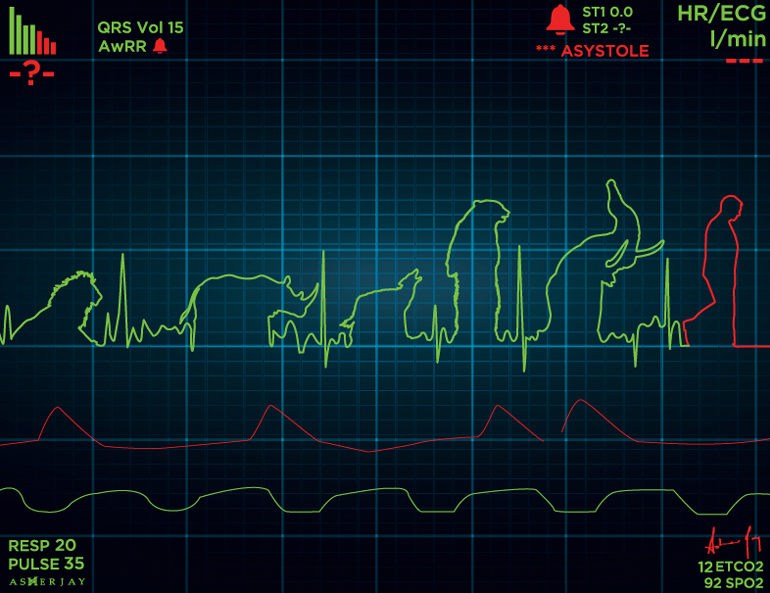 Her work illustrates the connection with the wild world that many of have lost over time. “The story of being human entails the story of the universe, the earth, the single-celled life forms that burgeoned in the primordial soup, the dinosaurs, the mass extinctions, all the way to the dwindling count of rhinos, tigers and tuna in the present day.” 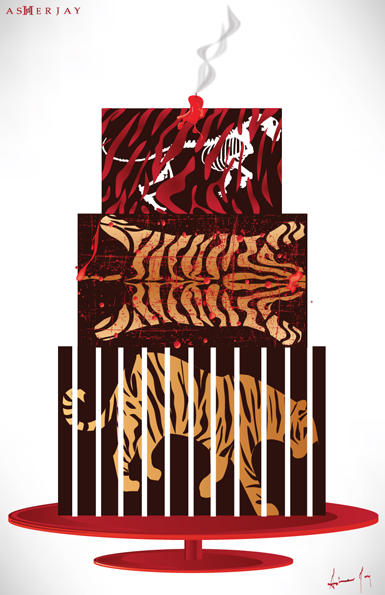 Jay’s work lays it all out for the viewer to see precisely what is happening to the world’s species at the hands of humans and their greed. When we look at wild animals as commodities, we are undercutting the role that they play in constructing the world we know as home. While we pretend that our lives are not inextricably linked to these species on a vital level, Jay is not so willing to allow her audience to operate under these pretenses.

In her own words, “By denying the parts of us that thrive outside our physical form as living markers of our own evolutionary and biological development, we are failing to acknowledge our own lineage and story. By depriving other life forms their right to exist we ultimately unravel our future in a blood bath.” 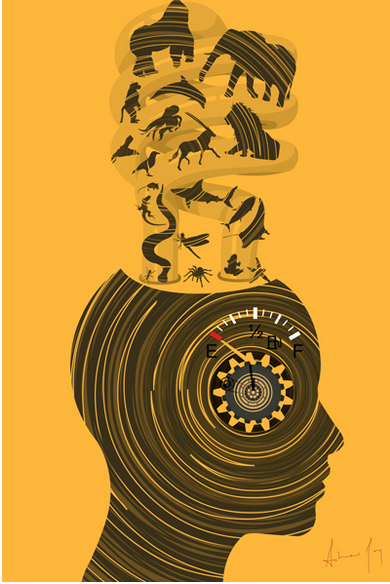 Jay has witness the truth in this statement over her time in Africa. Seeing how the wildlife trade is linked to the trade of drugs and weapons, the unrest that is spawned from brutally killing animals for profit extends deep society there and extends across the globe. Because of this, ending the illegal wildlife trade is incredibly challenging and involves the cooperation of many different players, not just on a local level, but on a global scale as well. 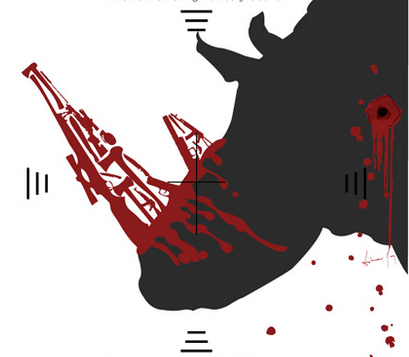 Jay’s art is not meant to sit idle behind a case in a museum. It is meant for action. The work she produces is meant for the everyday audience who is looking to rally support for the defense of wildlife. Her works have been printed as banners and hung outside peoples homes, made into bumper stickers, and leaflets, all with the goal of raising awareness to help end the illegal wildlife trade.

“The unique power of art is that it can transcend differences, connect with people on a visceral level, and compel action,” says Jay. 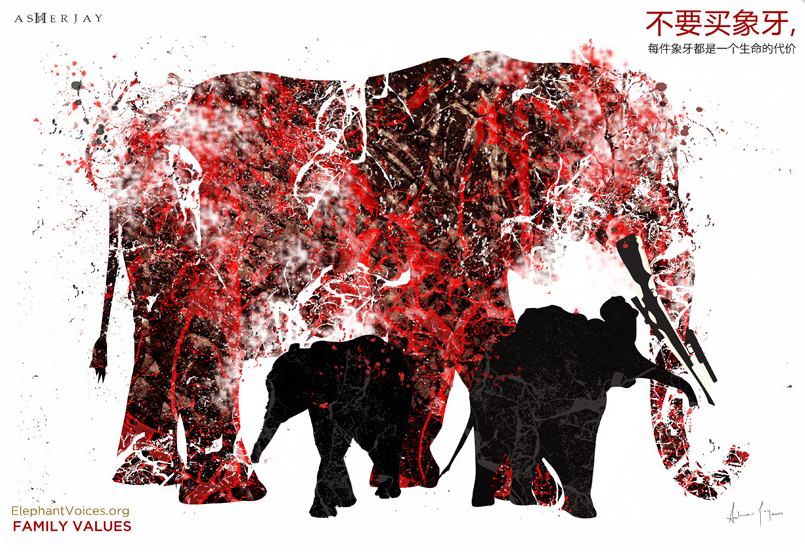 These powerful images have been featured in campaigns with WildAid, Save Our Elephants and African Wildlife Fund. Jay’s works have been made into advertisements for public transit, billboards, and magazines all in an effort to bring the consequences of the wildlife trade home for many people.

When the demand for goods like ivory, rhino horns, and shark fins end – so does the killing. The solution to this problem seems rather simple, but changing mindsets about the wildlife trade can be a slow process. In her TED talk, Jay explains that many people in China still believe that an elephant’s ivory tusk is like a tooth and will simply fall out when the time comes, leaving the elephant unharmed. Although this might seem like a silly misunderstanding, it has real consequences in that this belief drives consumers to purchase ivory under the guise that its production did not harm an animal.

Getting to the center of this cultural consciousness, Jay created a series that capitalizes on the conservation success China has had in protecting the panda, and extending that similar pride and compassion for an animal to other species. 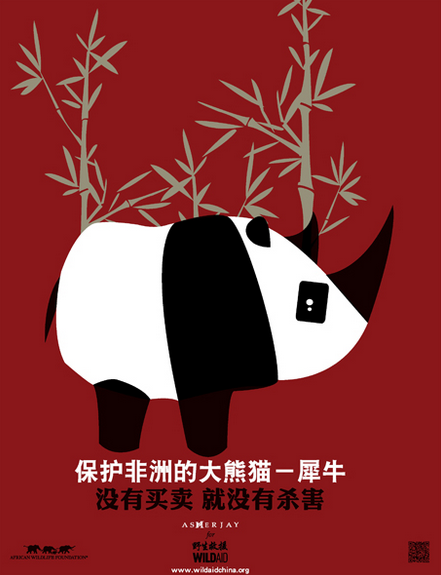 In this manner, Jay’s art work is able to adapt to cultural differences and speak to the target audience in a language that is inclusive and very inspiring. Rather than seeing the war against the wildlife trade as a futile endeavor, Jay’s work shows us how far we’ve come, without forgetting how far we have yet to go.

Though the journey towards ending the wildlife trade might be long, you can help Jay along her mission by sharing this post and sharing her works to spread awareness for this incredibly worthy cause.