It’s SeaWorld’s 50th anniversary this year – but before you put on your party hats and pour out the champagne, make sure you read up on these 50 not-so-celebratory facts about the entertainment giant. 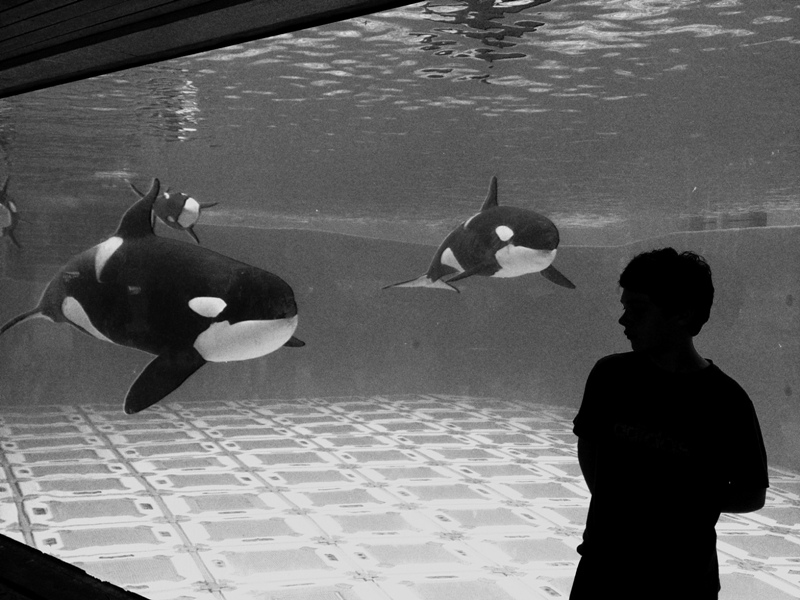 1. A female orca named Shamu was the first “star” to perform at SeaWorld San Diego, back in 1965. During her capture, her mother had been shot at and killed by self-professed “marine cowboy” Ted Griffin.

2. Tilikum, the long-suffering “prize bull” of SeaWorld, was captured in similar circumstances.

3. Griffin’s partner, Don Goldsberry, was later assigned the task of bringing orcas into the new theme park. He continued to use indescribably cruel capture methods.

4. Amongst other gruesome methods, Goldsberry is known to have once hired divers to slit open the stomachs of four orcas, fill them with rocks, put anchors around their tails, and sink them to the bottom of the ocean so that their deaths would remain undiscovered.

5. Of course, this brutal reality was not the picture SeaWorld chose to present to its earliest visitors.

6. Their first advertisement in “The San Diego Union” in the spring of 1961 took on a beguiling tone, with early investors promising San Diegans that the new development would be “A Playground for Citizens of Land and Sea.”

7. Back in 1961, nobody knew if killer whales were capable of surviving in captivity – let alone be trained to perform tricks – but Milton Shedd, founder of SeaWorld, along with partners George Millay, Ken Norris, and Dave DuMotte, were determined to press on with their plans regardless.

8. SeaWorld’s shows were always targeted at pleasing human audiences, rather than catering for the well-being of the animals.

9. Early plans included eight trained penguins performing “a series of underwater frills” that “display their grace in an underwater element, and with comic dignity delight their audience.”

10. These dignified and comical penguins would then be followed by trained porpoises, who would “tow their trainer through an obstacle course and chase mechanical fish like greyhounds.”

11. The grand finale? Blindfolded dolphins, who would cause visitors to “wonder at their ability to locate targets and run mazes.”

12. In this way, SeaWorld began to teach kids to regard cetacean captivity as normal – or even desirable.

SeaWorld’s Treatment of Their Captive Animals 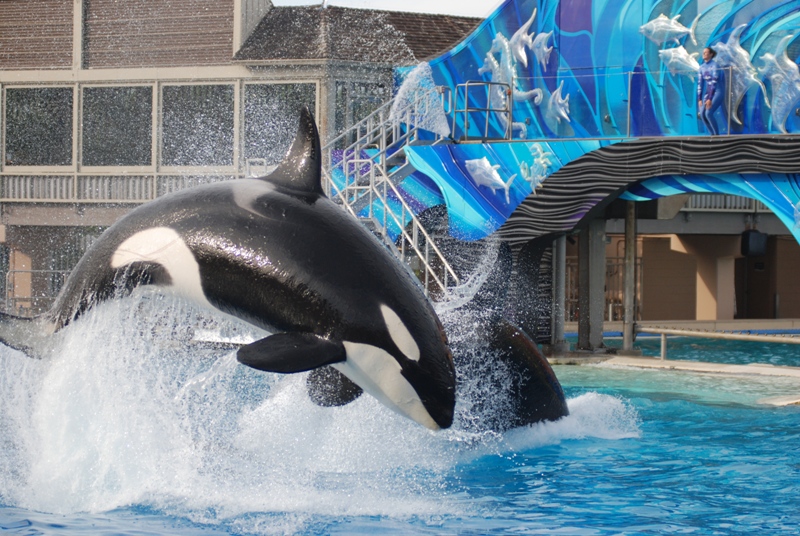 13. A scientific study undertaken by Newcastle University found that dolphins in close proximity to humans experience high levels of stress, which prevents them from “resting, feeding, or nurturing their young.”

14. In spite of this, SeaWorld continues to permit visitors to touch and swim with dolphins at its Discovery Cove in Orlando, Fla.

15. On Jan. 11, 2012, the U.S. Department of Agriculture (USDA) issued an official warning to SeaWorld San Diego because of its “repeated failure to provide drain covers that are securely fastened in order to minimise the potential risk of animal entrapment.”

16. Sadly, this lapse in care by SeaWorld staff led to the death of a sea lion.

17. In March 2013, following PETA’s complaint about a child who had been bitten by a dolphin at SeaWorld Orlando, the USDA cited the park for multiple infringements of the Animal Welfare Act, including their use of expired surgical materials –some of which were almost a decade old.

18. The USDA also noted that a dolphin tank and the areas surrounding the main orca performance tank were in a state of dangerous disrepair, with crumbling concrete and rusty beams that “could pose a threat to the health and safety of both animals and workers.”

19. The Marine Mammal Protection Act of 1972 put an end to SeaWorld’s practice of live whale capture. From then on, they had to devise a new way of supplying themselves with new star performers…

20. … especially since orcas who are held in captivity tend to die at a significantly earlier age than they would in the wild.

22. Female orcas are artificially inseminated with this sperm, often being forced to breed at a much younger age than they would in the wild.

23. Needless to say, the orcas don’t get to choose their own mates, as they would if they were out in the open ocean. No romance here!

24. In spite of loud protestations to the contrary, SeaWorld has separated mother and baby orcas on numerous occasions.

25. The organization has a long history of housing incompatible orcas together in the same tank – resulting in needless deaths, injuries, and incidents of aggression.

26. SeaWorld claims that their orcas benefit from taking part in their inane performances. Well, we guess they would probably be grateful for any kind of activity that doesn’t revolve around staring at the walls of their enclosures all day).

27. And if an animal isn’t performing to SeaWorld’s satisfaction, the solution seems to be: pump them with drugs.

28. They have administered these drugs without veterinary approval – contrary to vice-president of communications, Fred Jacobs’ statement.

29. Animal protection groups suspect that Morgan’s continued imprisonment at Loro Parque is motivated by SeaWorld’s desire to use her as a brand-new breeding machine.

30. SeaWorld believes that their continual purchases of expensive gadgets prove how much they care for their captive orcas.

Lack of Respect for Human Lives 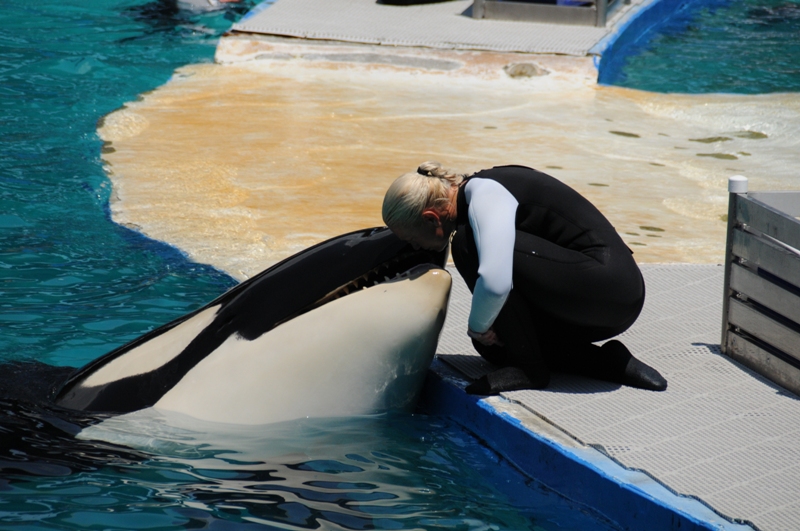 31. SeaWorld’s corporate log contains over 100 incidents of orca aggression at its parks.

32. The list of humans who have been killed or seriously injured by frustrated captive orcas continues to grow – but SeaWorld insists that there are no safety risks attached to working with these animals.

33. After a trainer was attacked by an orca at SeaWorld San Diego, in 2006, the California Division of Occupational Health stated that it was “only a matter of time” before someone was killed while interacting with the orcas.

34. Anti-captivity advocacy site SeaWorld of Hurt believes that “a further investigation into these attacks could have prevented further injuries and deaths.”

35. SeaWorld has consistently shirked responsibility for the death of trainer Dawn Brancheau, with president Dan Brown stating, “we have never never, in the history of our parks, had an incident like this.”

36. Hmm … Mr Brown, did you forget that SeaWorld orca Keto, who was on loan to Loro Parque, had killed trainer Alexis Martinez just eight weeks earlier?

37. The fact that they continue to exploit Tilikum as a source of sperm has made it abundantly clear that they have learned nothing from the tragedy.

38. An investigation by the U.S. Occupational Safety and Health Administration (OSHA) ultimately concluded that SeaWorld’s policies had been at fault in Brancheau’s death.

40. OSHA investigator Cindy Coe stated, “SeaWorld recognized the inherent risk of allowing trainers to interact with potentially dangerous animals. Nonetheless, it required its employees to work within the pool walls, on ledges, and on shelves where they were subject to dangerous behaviour by the animals.”

41. Contrary to popular belief, SeaWorld’s trainers frequently have no actual education in marine biology. Their job is to entertain visitors and put on a “good show”, not educate people about the intelligence, foraging behaviour, habitats, and natural family groupings of the animals held in the parks.

42. SeaWorld’s solution to all this has consisted of getting employees to wear safety vests. Right … because that’s going to solve all of their problems. 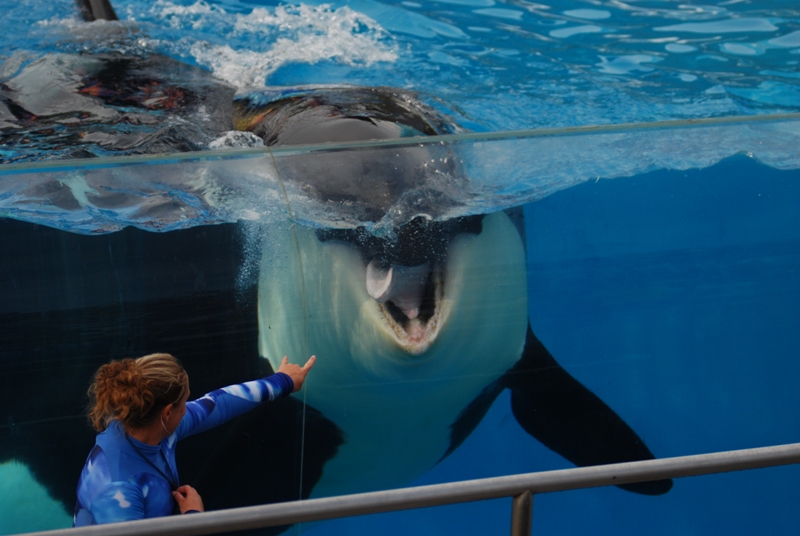 43. Who can forget one of their latest (and funniest) PR initiatives: the Truth Team?

44. They have twisted scientific papers to suit their own purposes.

45. In response to the “Blackfish Effect,” which has considerably eaten into their profits, SeaWorld released an open letter to the public, hilariously claiming to be “true animal advocates.”

46. SeaWorld continues to deny the “Blackfish Effect” and insists that everything is fine, even as customers abandon their parks in droves.

47. SeaWorld has consistently wimped out of taking part in public debate with anyone who happens not to share their views.

48. They have, however, been very quick to attack those dissenters, typically writing concerned marine scientists and activists as “dangerous extremists.”

49. Our hopes were briefly raised earlier this month, when it seemed as though the corporation had agreed to engage in a public debate at long last…

50. … until we realized that the focal point of the discussion will be SeaWorld’s economic contribution to the city of San Diego, with just a small mention of “animal welfare issues.”