David Kirby, renowned journalist and author of “Death at SeaWorld,” recently had a brilliant idea. Using the mapping application Google Earth, he zoomed in on SeaWorld’s Orlando amusement park in Florida, and a satellite image of SeaWorld’s Shamu Stadium appeared on his screen. 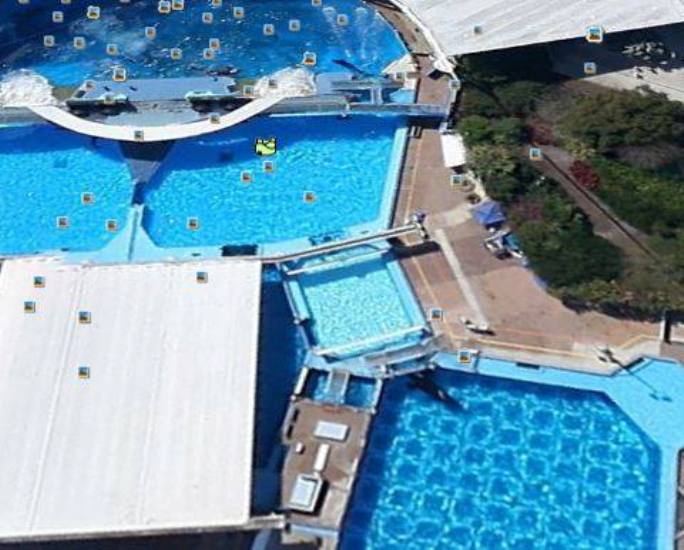 This is where several orcas, also known as killer whales, are incarcerated and used in performances. One of these orcas is called Tilikum. Best known as the orca that, in 2010, pulled his trainer underwater and killed her, Tilikum has endured more than three decades of confinement. Google Earth´s above shot shows Tilikum confined in what is known as G Pool. He is facing the metal gate that separates him from the orcas in the main show tank, as if begging to join them. Kirby posted the image on Facebook along with the words, “Thank you, Google Earth, for documenting the loneliness of this orca.”

Tilikum was only about two years old when he was snatched from his mother off the coast of Iceland in 1983. He has been kept at SeaWorld’s Orlando amusement park since 1992, and even though nothing about the tanks there even remotely resembles the natural ocean world, SeaWorld’s Vice President of Communications, Fred Jacobs, in October of last year gave this statement to CNN: “Our killer whale habitats are the largest and most sophisticated ever constructed for a marine mammal.”

Merriam-Webster defines the word “habitat” as: “the place or type of place where a plant or animal naturally or normally lives or grows.” An amusement park is not where orcas normally live, and while they can be forced to grow there, it is not where they naturally belong. Largest of the dolphins, these intelligent top predators have honed their survival skills over millions of years. Their sleek, torpedo-shaped bodies are built for speed and for traveling long distances. Orcas use their sophisticated echolocation to hunt and navigate, and they communicate with each other using a series of clicks, whistles, and calls. Each orca pod develops its own unique dialect, illustrating their highly evolved social behaviors.

On its website, SeaWorld describes the social nature of orcas: “Killer whales live in cohesive long-term social units called pods. A pod is a group of individuals that travel together the majority of the time.”

Had Tilikum not been yanked out of his ocean home, he would likely still be traveling the deep, chilly waters of Iceland for miles each day, going from one destination to the next. His world would have been one of tremendous diversity, new challenges, and boundless activities, such as hunting, playing, and socializing with pod members. With every leap out of the water, he would see an endless ocean, free of barriers other than where the ocean meets the shore. At more than thirty years of age, he would have acquired the skills of a master hunter, and, under the experienced guidance of his mother, would have learnt an impressive number of team-oriented methods of hunting live prey.

The orca is the largest animal ever to be taken into captivity. The largest-ever orca on record in captivity, Tilikum is endowed with six tons of physical strength coupled with tremendously complex brain power. In several images posted online, Tilikum is confined without the company of other orcas.

Loneliness and boredom, it seems, have become everyday life for him. Trapped in a minuscule tank with no escape from the tropical heat and surrounded by souvenir shops, popcorn stands, ear-deafening music, and applauding audiences, all of his powerful potential is methodically subjugated by manmade constructions of impenetrable walls and metal bars.

One image shows Tilikum restrained, in isolation, in a tank so grotesquely small that his rostrum and tail flukes almost touch the sides of the barren enclosure. The image reveals the inherent, obvious wrongs of subjecting an ocean-roaming and exceptionally social animal to solitary confinement with nothing to do and nowhere to move. Indeed, the only sophistication to be found in Tilikum’s impoverishing incarceration is in Tilikum himself, and Fred Jacobs is woefully wrong when he boasts that SeaWorld has constructed the largest and most sophisticated habitat for killer whales ever.

SeaWorld has constructed no such thing. Only nature has.