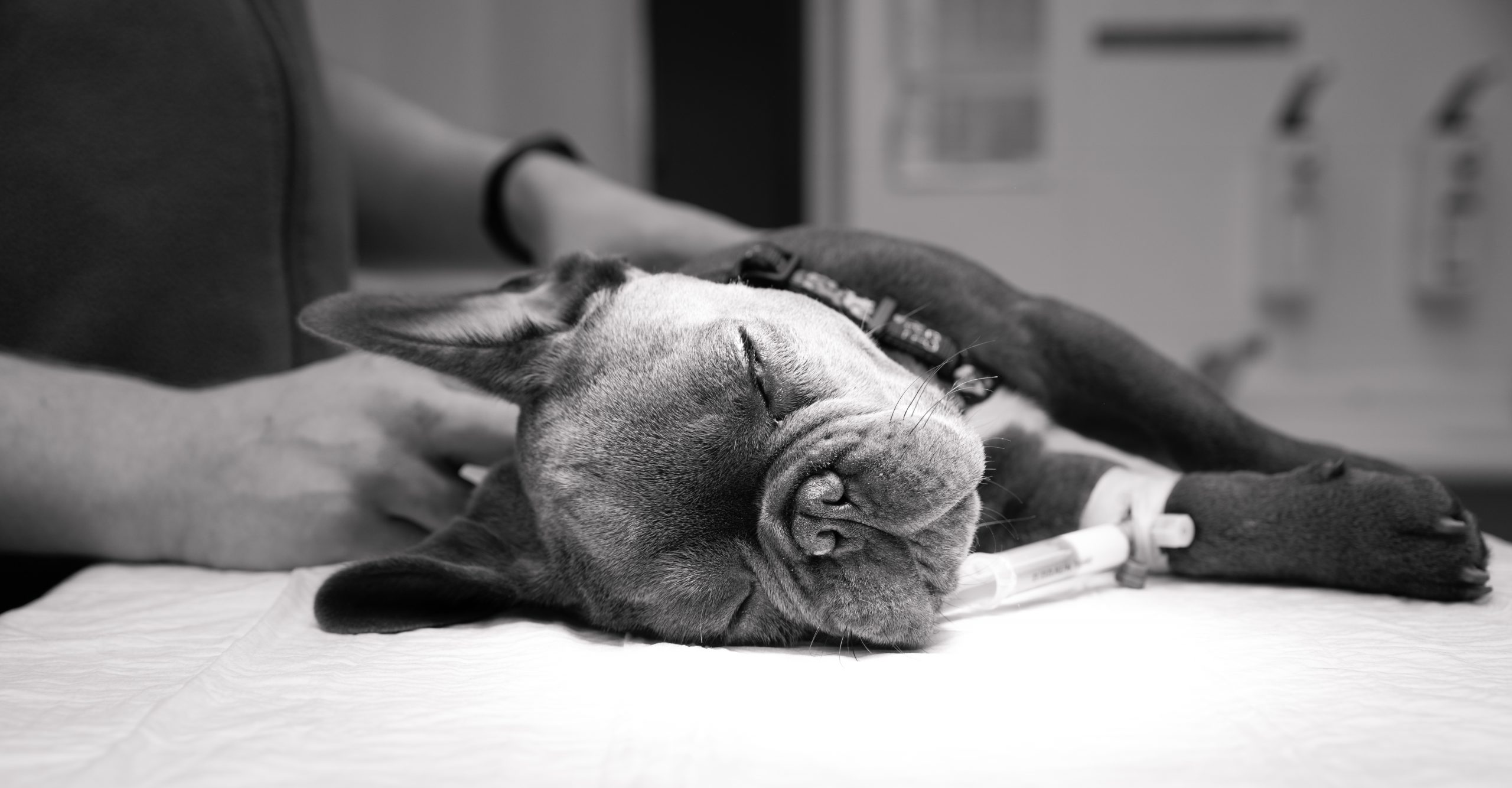 According to the American Pet Products Association’s 2019-2020 National Pet Owners Survey, around 63.4 million U.S. homes have a dog. It’s obvious that dogs are pretty popular pets and we’re not surprised! They’re so sweet and a great addition to any family. Dogs can easily turn even the worst of days around.

Sadly, sometimes people view dogs as an accessory and care more about the way the dog looks than the dog’s well-being. Dog shows, contests, and various celebrities have also exacerbated this issue. The desire to have a certain dog breed with a very distinct look often results in people getting dogs from breeders.

In order to make dogs have a certain appearance, such as the smushed face of a bulldog, breeders often breed dogs that share genetic material. This allows them to produce puppies with “desirable” physical characteristics. However, it also increases the likelihood that both parents will carry the “same autosomal recessive conditions.” Autosomal recessive conditions are health issues that occur when a puppy “has two copies of a faulty gene – inherited from both its mother and father.)” These conditions range in severity, but as the less severe ones build up, they can greatly impact a dog’s health and lead to increased puppy mortality as well as a shorter lifespan. Dogs that are born with these various physical and neurological abnormalities caused by inbreeding are often abandoned, neglected, or euthanized.

There are over 600 genetic diseases that dogs can carry. In addition to the various physical deformities and health defects that these dogs may have due to breeding, breeders also make alterations on dogs, such as ear-pinning, tail-docking, and de-barking. These are all painful and unnecessary procedures that a dog should never have to undergo.

Here are 10 Stories of Ways that Breeders Cause Harm to their Dogs:

Brachycephalic dogs, like bulldogs, pugs, and Boston terriers, are bred to have small snout because it’s “cuter.” However, this appearance comes at a great cost for the dogs’ health. They have difficulty breathing while exercising and resting, so it’s hard for them to play and run around. In addition to respiratory issues, they may regurgitate food, gag, cough, vomit, be unable to cool down, and have difficulty eating.

This ten-month-old French Bulldog, Dory, is getting an expensive life-saving procedure to help her manage the health issues that come with being a brachycephalic dog. She’s had difficulty playing with her doggy friends and living an overall normal life for a dog. Sadly, while the procedure will likely help tremendously, she will still have issues as a result of her breeding.

Short spine syndrome is one of the rarer conditions that result from inbreeding. This condition causes “the vertebrae of the spine to remain in a more cartilage-like state instead of strengthening into bone.” Thus, the spine twists around and some vertebrae fuse together, causing a short spine. Fortunately, this condition doesn’t cause dogs much pain. It does, however, make life a little more difficult as their range of motion is very limited.

Cooper was abandoned by a puppy farm because he was born with Short Spine Syndrome. Rescuers found him in the woods when he was only 2 months old, with ear mites, worms, and a hernia. Luckily, after being rescued by a loving, Cooper now lives a happy life.

3. Tiny Pup Abandoned Because of Her Cleft Palate

Puppies born with cleft palates have difficulty surviving because they cannot nurse. The shape of their mouths makes it difficult for them to latch onto their mother’s nipple for milk. If they do latch on and get a little milk, they could get aspiration pneumonia, so they have to be tube-fed. These dogs often get euthanized or die if people are not willing to give them a lot of help and care.

This pup was abandoned by a breeder because she was born with a cleft palate. Luckily, a rescuer offered to take her in and do her best to give the pup the happy life that she deserved. Her rescuer was worried that the pup wouldn’t survive, but she did everything she could and when she needed a little help, her own French bulldog, who was rescued from a breeder, was there to help.

Dogs with Swimmer Syndrome are born with flat-chests, legs that are splayed out to the side, and weak muscles. This means that the dogs are unable to stand or walk. Extensive physiotherapy is needed to help rehabilitate these dogs. Oftentimes, these dogs are euthanized since treatment is difficult.

Caspar was one of the Swimmer Syndrome puppies that were going to be euthanized because his breeder could not sell him. Luckily, a kind rescuer took him in and did everything she could to help him. Caspar had a weak heart and was very lethargic, which worried his rescuer and the vet. She worked tirelessly to help this dog learn how to walk and he started showing improvement.

5. Beaux Tox: The Dog that No One Wanted

In addition to health issues, some inbred dogs may have physical abnormalities that do not coincide with what a “designer dog” should look like. Thus, breeders abandon them or give them away without any care to a person’s fitness to own and take care of a dog. This can lead to extreme cases of neglect and even abuse.

Because Beaux Tox was born with a facial deformity, his breeder gave him away for free. The owners left him in their yard for five years, neglecting to give him love or even proper care.  When he was finally rescued from them, he was very ill and the vet did not think that the would survive. But, with lots of love, attention, and the support of his best doggy friend, Riley, Beaux Tox recovered and is now living his best life.

Proponents of tail docking and ear cropping propose that it “preserves tradition;” it is a matter of aesthetics and what pleases the owner. However, opposition comes from genuine concern for a dog’s health and well-being. Tail docking is when someone cuts off a dog’s tail, only leaving a nub. It is done to puppies at only a few days old, when they are still too young to even be able to get anesthesia. Ear cropping, cutting off part of a dog’s ears to make them stick up a certain way happens between eight and twelve weeks old. Dogs cannot consent to these procedures and they are completely unnecessary. They contribute to people viewing animals as objects or accessories, rather than beings that live, breathe, and feel things.

Miss Flans is a Chiweenie inbred dog with multiple genetic abnormalities including being deaf and mostly blind, as well as having seizures. Her previous owners did not know how to care for her and were overwhelmed by the medical issues that she suffered as a result of breeding, so they gave her up. Linda rescued her and loved Miss Flans for all that made her unique. She cared for her and helped her deal with her various medical issues so that Miss Flans could have a long, happy life.

Many inbred dogs, like Miss Flans, suffer a variety of medical issues that impact their daily lives. Without proper care, life can be much harder for these poor pups. Sadly, because breeding is about profit, breeders may sell dogs to people who don’t know how to care for them, which can make life painful and lonely for these poor pups.

Many breeders will “debark” dogs to make them more appealing to buyers. Debarking involves severing or mutilating a dog’s vocal cords. The procedure can cause infection, respiratory problems, and severe emotional trauma to the dogs. It is completely unnecessary and inhumane. Not only does it cause extreme physical trauma on the dog, but it can also emotionally traumatize them since barking is a way for dogs to communicate. There are many risks associated with this procedure. For example, this poor dog, Molly, was debarked by her original owner before being rescued. As a result, she struggles to breathe when she tries to bark.

9.  Lumen, the Great Dane, Needs Surgery for Her Deformed Toes

Lumen was born blind and with deformed toes as a result of inbreeding. Her breeder dumped her, but fortunately, Ashley fell in love with the sweet pup and rescued her. Many people thought that Ashley should euthanize Lumen, but Ashley wanted to at least give the pup a chance at living a happy life. Because her toes are all stuck together, Lumen has difficulty walking and putting wait on her feet. Thus, she will undergo a series of surgeries to fix her toes and eventually get orthodox.

Syringomyelia (SM) causes cysts to form along the spinal cord, which eventually results in physical pain and neurological damage. This video shows the symptoms of a few affected dogs, including Darwin, Dylan, Cassie, Flash, and Kingsley. These dogs have episodes, which get more severe, frequent, and/or longer over time. The poor pups are obviously struggling and in a lot of pain as you can see in their frantic movements. Some dogs can live for years, but others rapidly decline and become debilitated within a few months.

Dog breeding is an inhumane and heartbreaking business. Not only do dogs such as these suffer birth defects and painful alterations, but they also are often kept in terrible conditions. The mothers are usually overbred and neglected; the “imperfect” puppies are abandoned. Additionally, breeding dogs is irresponsible contributes to the dog population crisis. There are so many dogs in shelters and on the street that need homes. Rather than buying a dog from a breeder or store, make sure to adopt and foster dogs from a shelter.