By In Defense of Animals 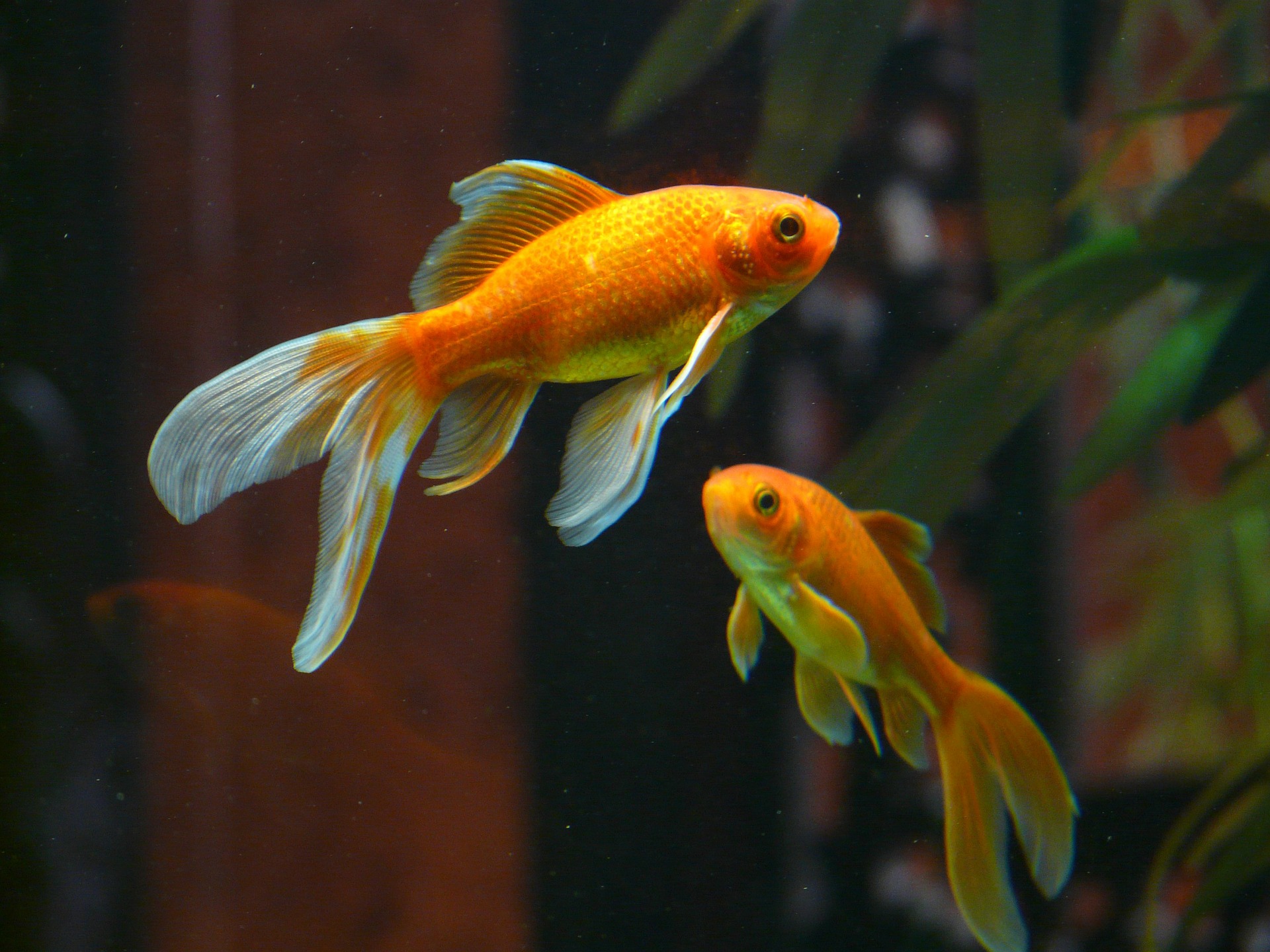 The term “animal abuse” invokes many images. Some people picture dogs in puppy mills or rabbits in laboratories. Others picture exotic animals in circuses, lions, and elephants killed by trophy hunters, or even chickens, pigs, and cows in factory farms. However, one group of animals makes few appearances. They are unable to make facial expressions, they can’t scream, and lack vocal cords but vividly feel pain despite their difficulty communicating it to us. These animals are fish.

Fish are the single most abused group of animals across the globe. Trillions are killed every year by the food industry, the pet trade, in laboratories, and for blood sports. Despite conclusive evidence that fish suffer, they are excluded from many animal protection laws including the Animal Welfare Act, the Humane Methods of Slaughter Act, and the Preventing Animal Cruelty and Torture Act. Many states also exempt fish from their cruelty laws or exempt standard fishing practices from compliance with them.

Why Do We Need Respect for Fish Day?

On Sunday, August 1st, In Defense of Animals is coordinating a national day of action called Respect for Fish Day to change this status quo. Respect for Fish Day seeks to raise awareness about the fact that fish are sentient and demonstrate that they deserve the same protection granted to any other animal. Respect for Fish Day aims to build a broad coalition of animal protection groups oriented towards fish protection issues and a community of advocates devoted to fighting cruelty against them. We hope this campaign will lay a foundation for future efforts to protect fish and help organizations incorporate action for fish into their campaign portfolios. As momentum builds, the public perception of fish will improve and there will be greater support for legislation to restrict their exploitation. Over 250 organizations have endorsed Respect for Fish Day.

Source: In Defense of Animals

Over the past decade, a large body of scientific evidence revealing that fish are sentient has emerged. For example, in one study fish were given a choice between swimming in a well-decorated tank or a barren one. They consistently chose the decorated tank, but after being injected with painful chemicals, chose a barren tank that contained painkillers. Such experiments are unethical, but provide irrefutable evidence that fish feel pain. Some scientists still believe that fish are not sentient, but the scientific consensus is that they are. According to the American Veterinary Medical Association, “the preponderance of accumulated evidence supports the position that finfish should be accorded the same considerations as terrestrial vertebrates in regard to relief from pain.”

Fish are also capable of feeling positive emotions. They engage in play, “sing” by rubbing or vibrating body parts, and perform dances to impress mates. Male pufferfish build displays called “mystery circles,” which are decorated with seashells to impress females. The females of many fish species exhibit maternal instincts and care for their babies long after they hatch. Fish are also intelligent. They can count, remember the faces of group members, and use tools. A 2015 study from the journal Animal Cognition reviewed over 200 papers on fish intelligence and concluded that “when comparing [fish] behaviors to primates, one finds very few differences.” 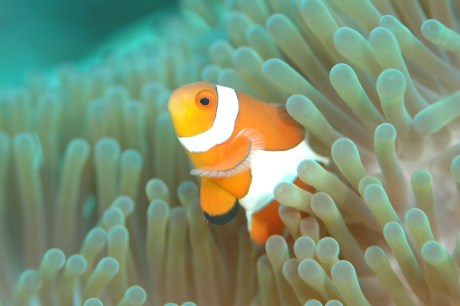 2. Commercial fishing is emptying our oceans

The single biggest contributor to fish suffering is commercial fishing. Every year, trillions of fish are captured from the wild in barbaric ways. Fish are trapped in large nets where they pile on top of one another and are crushed by each others’ weight. Trawling nets are dragged along the ocean floor and sweep it clean of life. Longlines have hundreds or even thousands of baited hooks. Many of the fish caught on these lines die from exposure, and open wounds before they are pulled out of the water. The U.S. has no regulations on the slaughter of wild fish. They are killed in cruel ways which include being frozen to death, bludgeoned, decapitated, or suffocated. It can take fish over nine minutes to die from suffocation after being pulled from the water 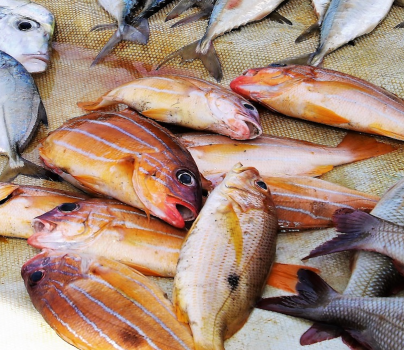 3. Industrial fish farming is on the rise

As the oceans are emptied of wild fish, the seafood industry has turned to industrial fish farming to replace the deficit. The fish farming sector is growing exponentially and fish are now the United States’ most commonly farmed animal after broiler chickens. Farmed fish are housed in overcrowded ponds or tanks with filthy water. Disease quickly spreads in these conditions and many fish are eaten alive by parasites like sea lice. Fish also develop vertebral deformities like bent spines and cardiac malformations which cause their hearts to flip upside down. Fifty percent of farmed fish are partially deaf, 80 percent have impaired vision, and over 20 percent perish before they can be slaughtered. Like wild fish, farmed fish suffer greatly during slaughter. They are suffocated, skinned alive, stabbed to death, and stunned with carbon dioxide which causes them to hemorrhage blood from their gills. 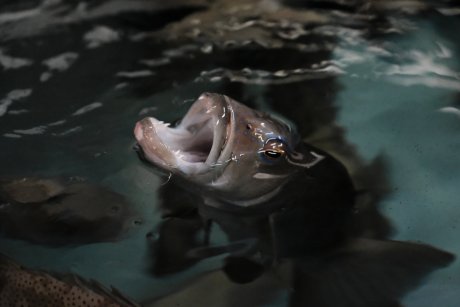 4. Sport-fishing is cruel and inhumane

Over 300 million wild fish are captured for sport every year in the United States. Fish are stabbed in the face with sharp hooks and removed from the water, where they suffocate. They often sustain severe injuries and the hooks may pierce their gills, eyes, or throats. If released, fish may be unable to properly hold food in their mouths for days or develop permanent disabilities. Approximately 22% of fish caught with circle hooks have their vision permanently impaired. They also suffer from a condition called barotrauma which causes their eyes to pop out of their skulls and their organs to expand due to decompression when they are brought to the surface. Many fish succumb to their injuries and, on average, 18% die after being released. 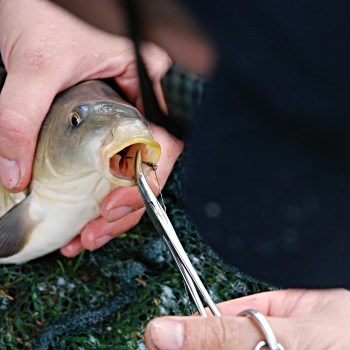 Like lions, elephants, and other land animals, fish are targeted by trophy hunters and slaughtered so their corpses can be displayed. Fish are also targeted in tournaments and contests where people compete to kill the most or largest fish. Many of the targeted species, like marlin and sharks, are threatened or endangered. 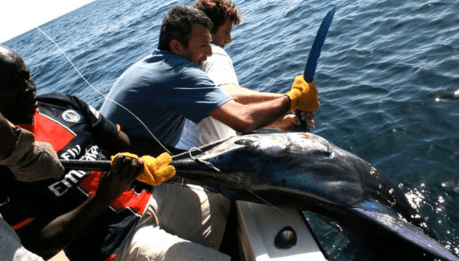 6. Breeding, capturing, and selling of fish by pet retailers is rife with abuse

The pet industry also inflicts abuse on fish. Most of the freshwater fish sold in pet stores originate in commercial breeding facilities which are the underwater equivalent of puppy mills, while saltwater fish are primarily captured from the wild. Marine fish are caught via cruel methods which include being stunned with cyanide. Approximately 75% of the fish caught with cyanide die within an hour of capture and those that survive develop long term medical problems like internal organ damage. Roughly 10-40% of caught fish die from stress and injuries before they can be exported from their home countries.

In pet stores, fish are subjected to poor living conditions and are marketed irresponsibly. For instance, betta fish are sold with small bowls and shoppers are told that this housing is sufficient to keep them healthy. In reality, betta fish require large tanks, heating, and water filtration. When bettas are kept in small containers, their health declines, and they develop illnesses like fin rot. Many fish are purchased on a whim. They quickly become unwanted, are forgotten, and slowly die from neglect. Fish are protected by animal cruelty laws in most states but their abuse and neglect is rarely reported or prosecuted. 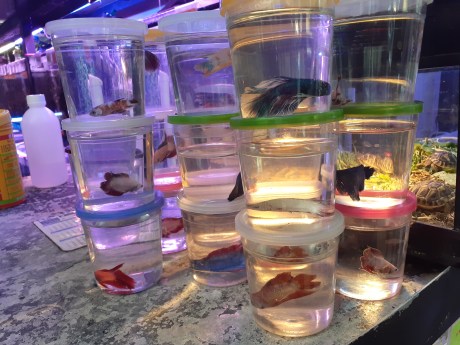 Source: In Defense of Animals

7. Experimentation on fish Is on the rise

Fish in laboratories suffer from similar mistreatment and disregard. Zebrafish, the most common species used in laboratories, are subjected to inhumane procedures such as force-feeding drugs and poison. The use of fish for experimentation is increasing rapidly due to the development of genetically modified fish who are susceptible to chronic and genetic diseases. Fish in laboratories rarely receive enrichment and are excluded from the Animal Welfare Act, the only federal legislation protecting laboratory animals.

The suffering fish are currently subjected to is overwhelming and beyond comprehension, but we can change this reality. Please consider taking the following actions to support Respect for Fish Day and build a better future for our finned friends. For more information on Respect for Fish Day, please see In Defense of Animals campaign outreach brochure and participation guide