August 24th is National Waffle Day. If you need an excuse to eat waffles without any regard for the time of day, today is the day to do it. But first, it’s time for a little waffle history lesson. The very first recipe for waffles dates all the way back to the 14th century. Though the recipe contained no leavening, a batter was pressed between two irons until cooked through — sounds like the precursor to waffles to us. Not only was this waffle not leavened and thus not light and fluffy, it also was missing what we love most about waffles: the grid pattern. It wasn’t until the 15th century that waffles gained those little grids that are so perfect for holding maple syrup. Fast forward to 16th century France, where waffles were so popular that King Charles IX enacted the very first waffle legislation. Oublieurs, or French waffle-makers, could be no less than four yards from each other.

Fast forward to today: waffles still a beloved breakfast and brunch food and luckily, the process for making them has gotten much easier, thanks to electric waffle irons. No more heating heavy iron plates over a crackling fire! We’ve also found ways to make waffles even better, from adding chocolate chips and fruit to the batter, hidden veggies, or even making them completely gluten-free using all kinds of flours. Because nobody should be left out from expe

So, in celebration of National Waffle Day, check out 10 Vegan Waffle Recipes That Left Us Awestruck and then stick around for these 14 amazing, sweet, and savory waffle recipes. 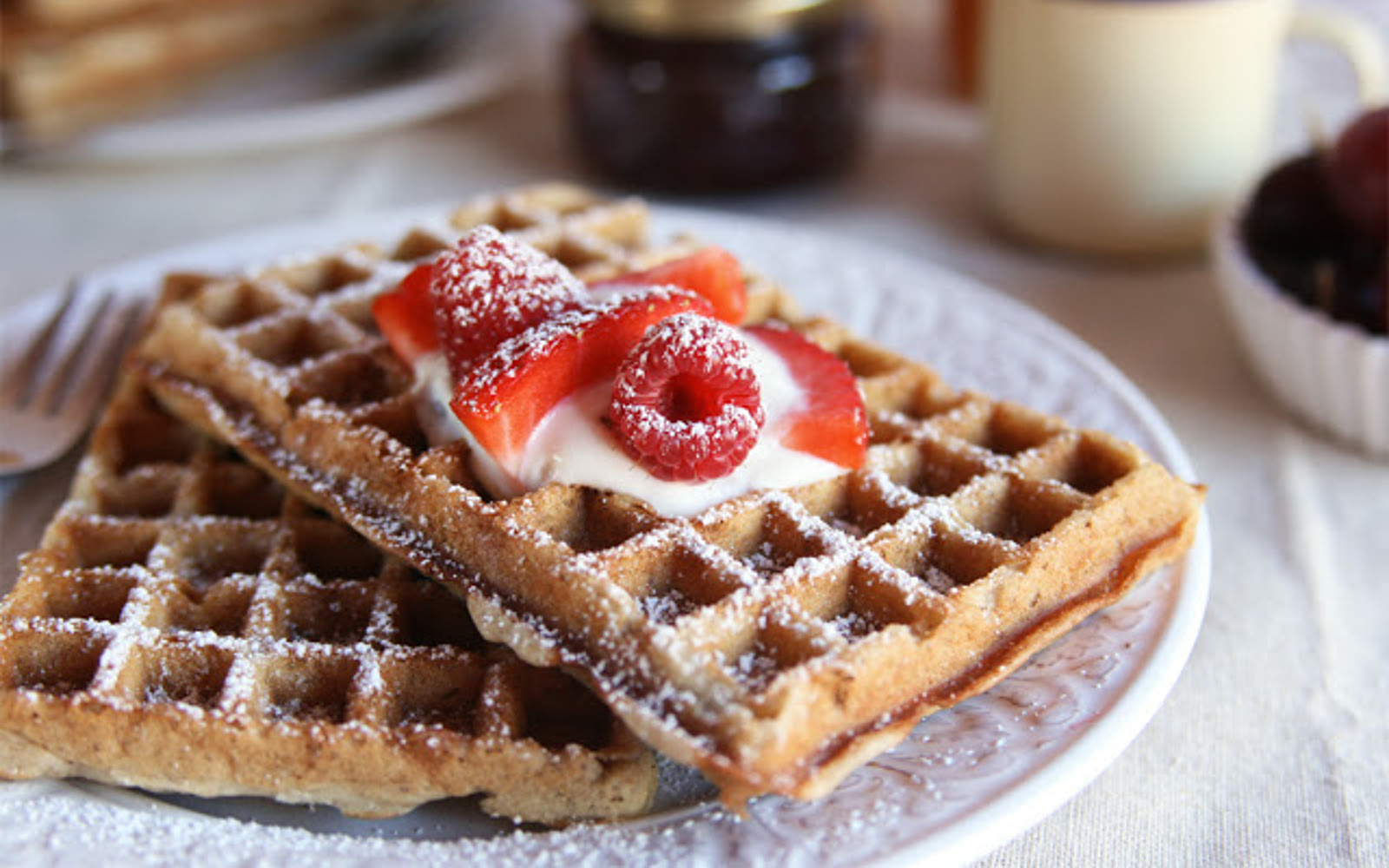 Without a doubt, waffles always make a perfect breakfast, brunch, or dinner. These fluffy Buckwheat and Quinoa Waffles are gluten-free and they’re also free from refined sugar, save the topping. Serve these delicious multi-grain waffles with a sprinkle of confectioner’s sugar, fresh berries, and plenty of maple syrup. 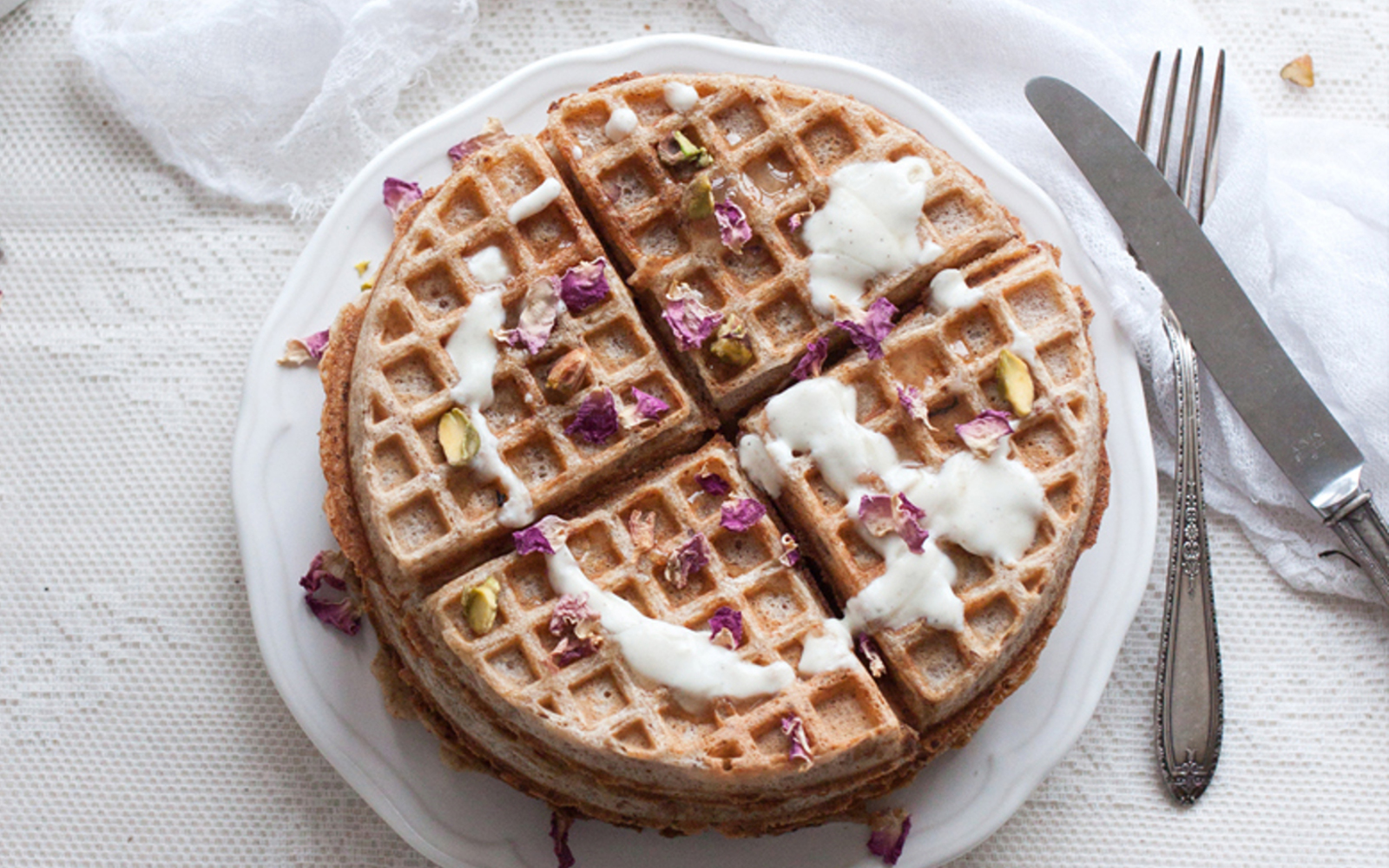 These Sourdough Spelt Waffles aren’t tough like the bread! They’re light, fluffy, and with that distinct touch of sourness that makes them unique and delicious. While making your own sourdough starter takes time, it’s well worth it for these waffles and for the bread you can make with the leftovers. Top these waffles with cashew or coconut cream and a drizzle of maple syrup. 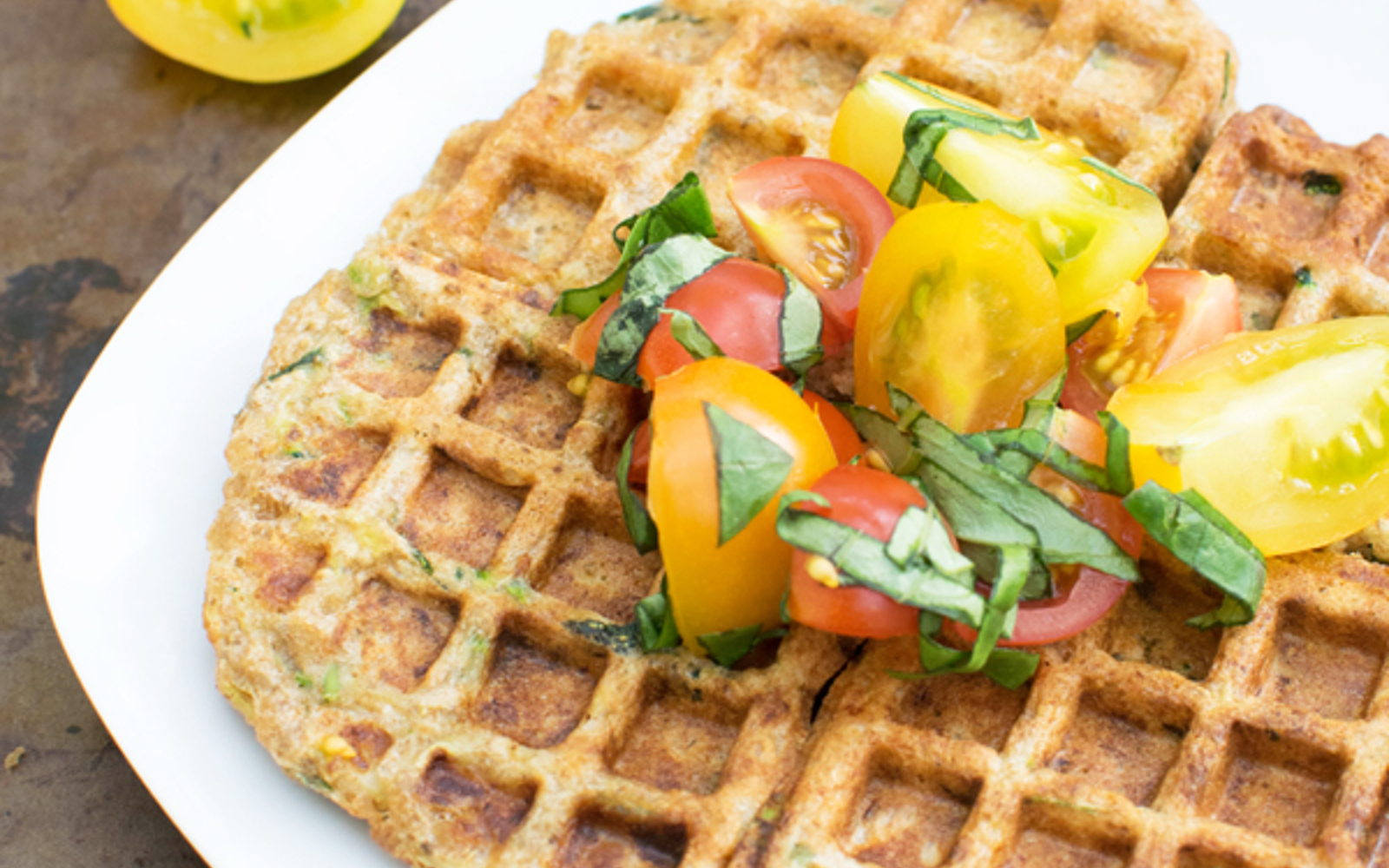 Who said waffles had to be sweet? These savory Einkorn Zucchini Waffles are loaded with zucchini and fragrant basil. What’s einkorn? Einkorn is a wheat that’s one of the oldest ancient grains. Having been left relatively untouched by modern agriculture, einkorn has also a different gluten composition and has been found to more digestible than modern wheat flour. It’s a good alternative if you have a gluten sensitivity, however, it is not suitable for coeliacs. Serve these zucchini waffles with come chopped tomatoes. They make a perfect for brunch, lunch or dinner. 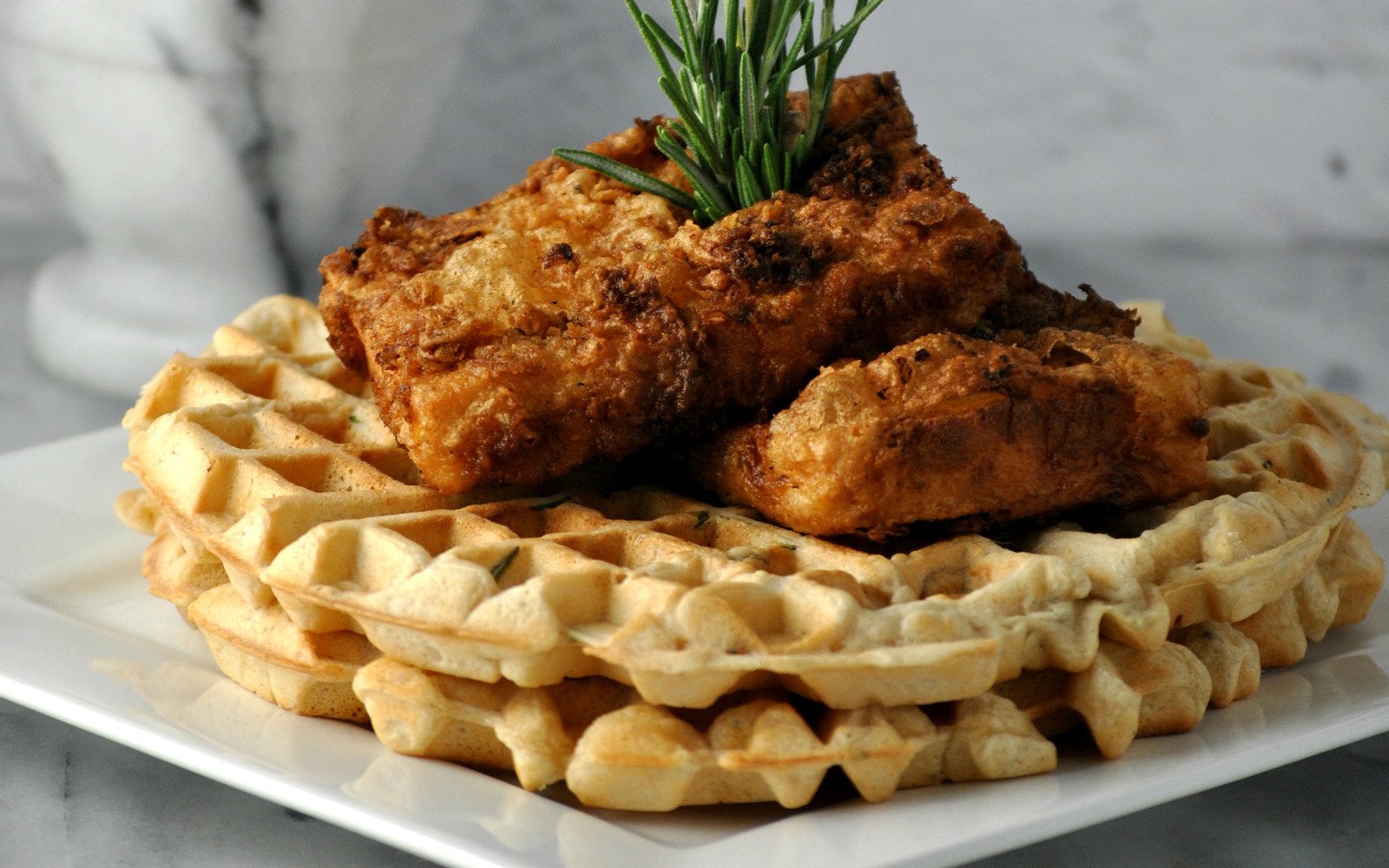 Crispy fried “chicken” on top of a fluffy stack of waffles… What could be better?! Whether it’s the hot sauce baked into the tofu, the sprinkle of rosemary, or the truffle oil in the waffles, this “Chicken” and Waffles is full of tasty surprises. With such beautiful presentation, this is a must at your next weekend brunch. Don’t forget the maple syrup! 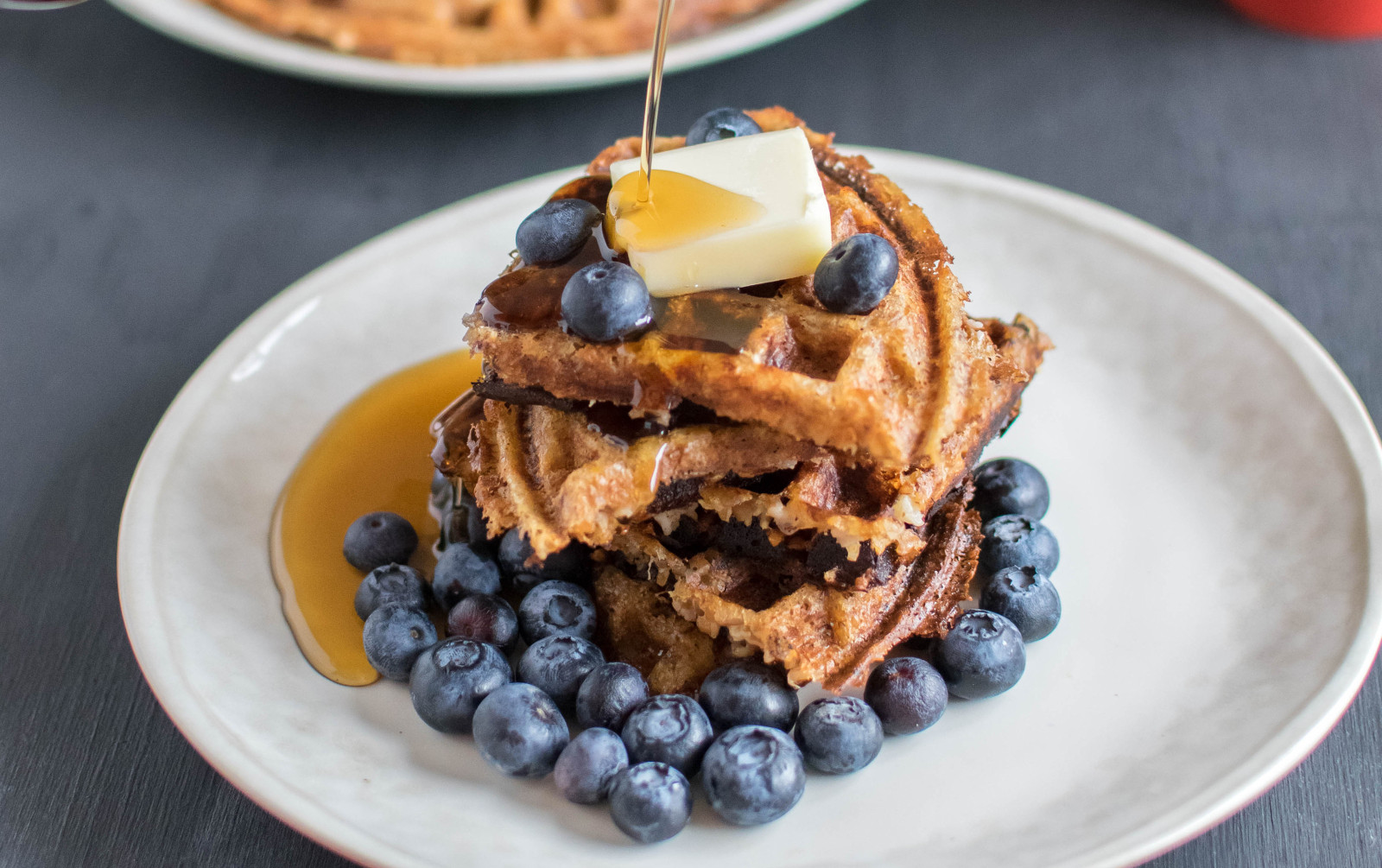 Consider starting your day with these protein-packed Peanut Butter Bulgur Waffles! If you haven’t cooked with bulgur wheat before, this is a great place to start — the hearty grain gives these waffles a pleasantly chewy and crispy texture. Top with a generous drizzle of maple syrup and a pat of vegan butter for the ultimate breakfast. 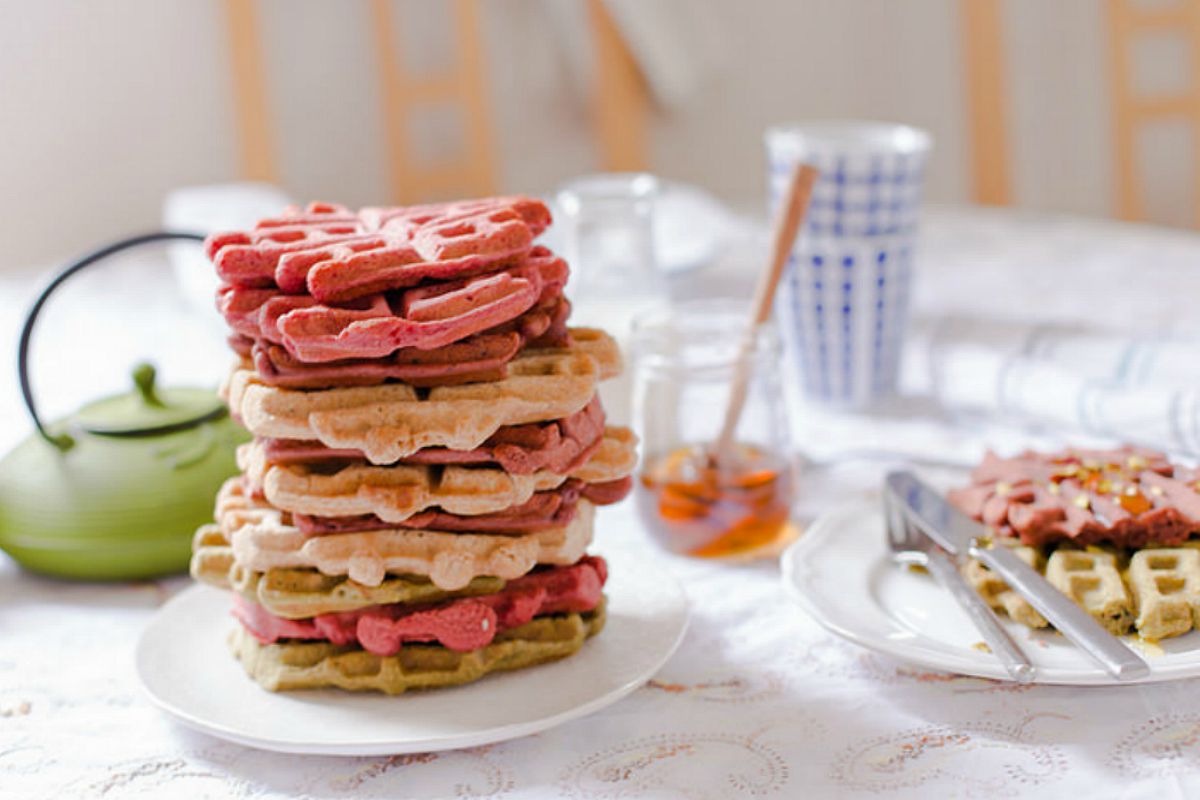 These light and fluffy Spelt Waffles With Rosewater Maple Syrup are a perfect template for your favorite flavorings — the ones pictured here were flavored with matcha powder and beet powder. Regardless of what you put in them, they make a truly special breakfast when topped with crushed nuts and fragrant rosewater-scented maple syrup. 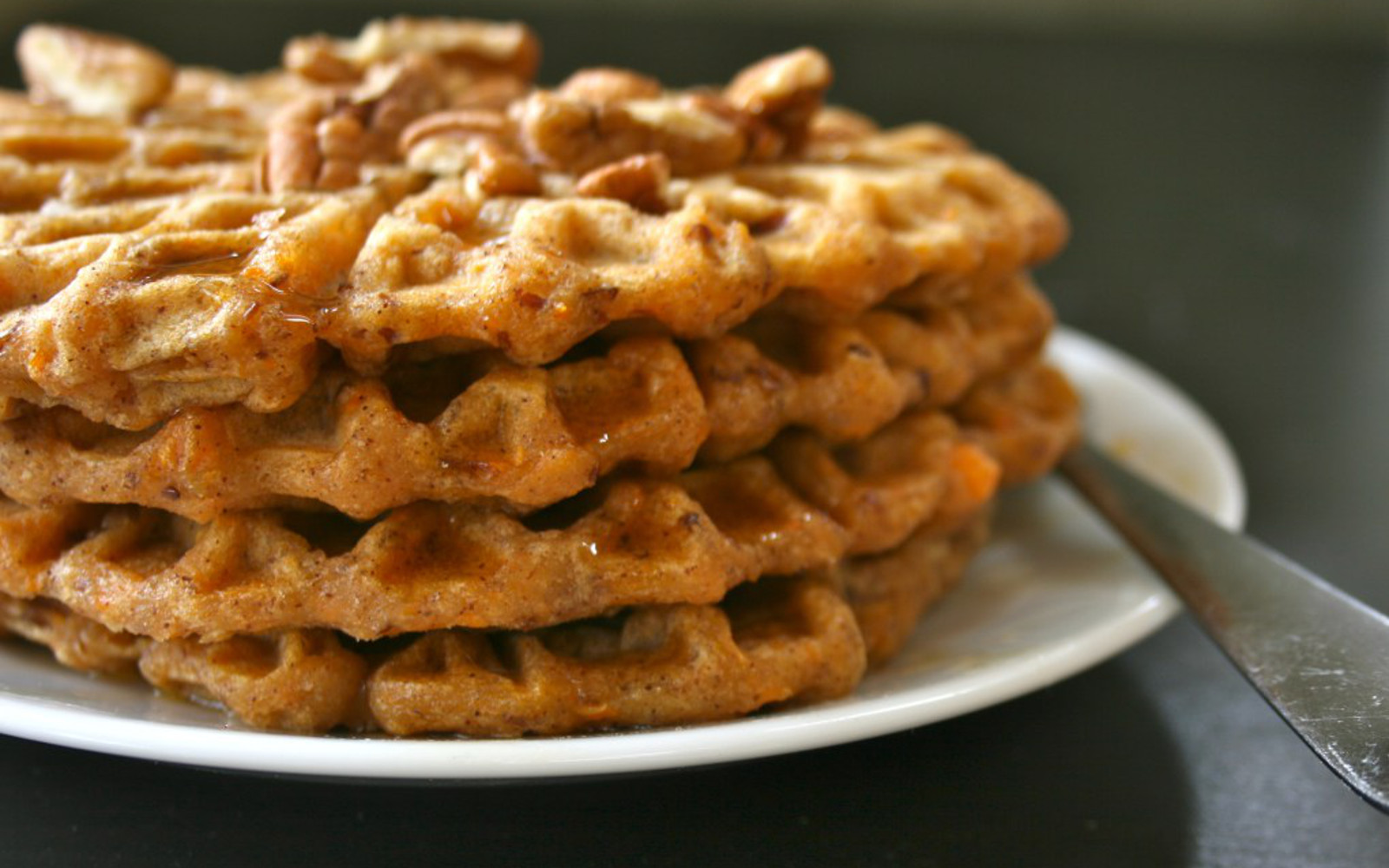 Sweet potato and chai spices might sound a little different, but trust us, it’s delicious. These Chai-Spiced Sweet Potato Waffles are full of  warm spices and subtly sweet flavor. Sweet potato helps make them light and fluffy, but they cook up crispy on the outside and taste fantastic with vegan butter and maple syrup. 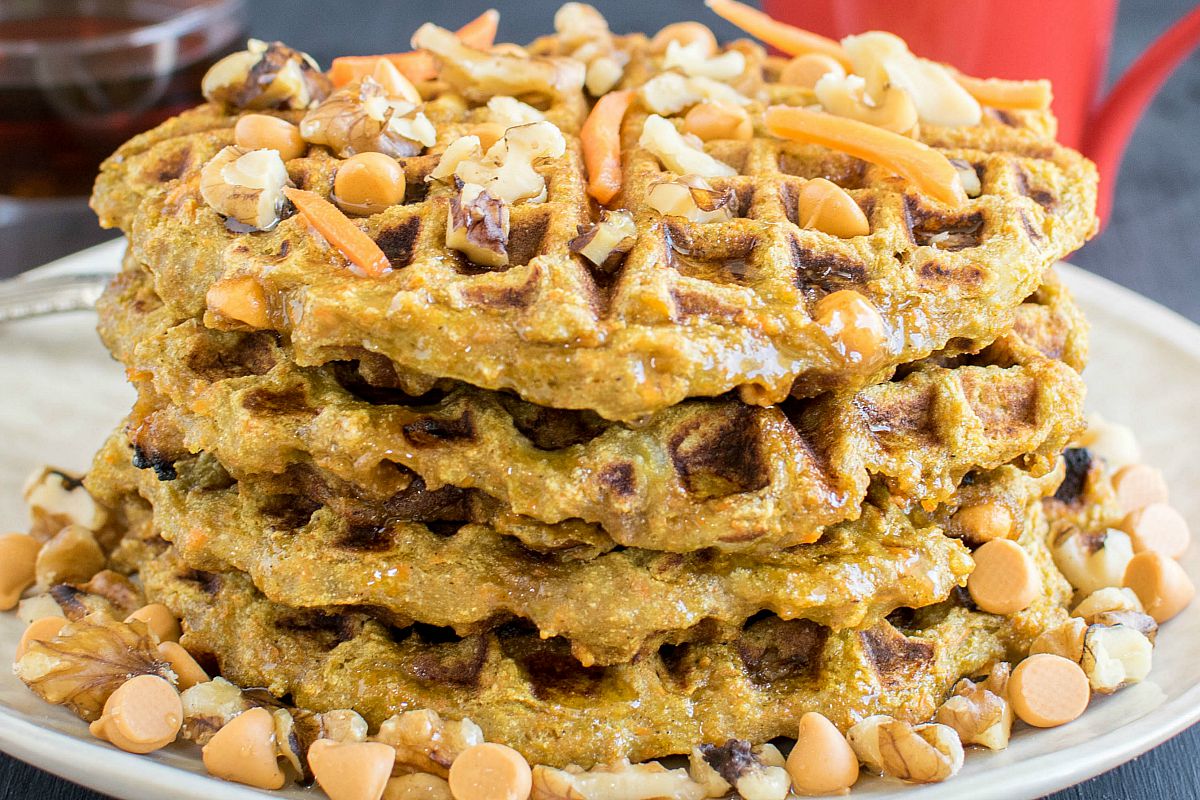 Imagine if you could devour a cake for breakfast every day. A yummy, soft, delicious, creamy, spongy cake that melts in your mouth. These Butterscotch Carrot Millet Waffles can make that possible. This is a breakfast recipe which requires minimum time and comes as close to cake as possible without actually being, you know, cake. 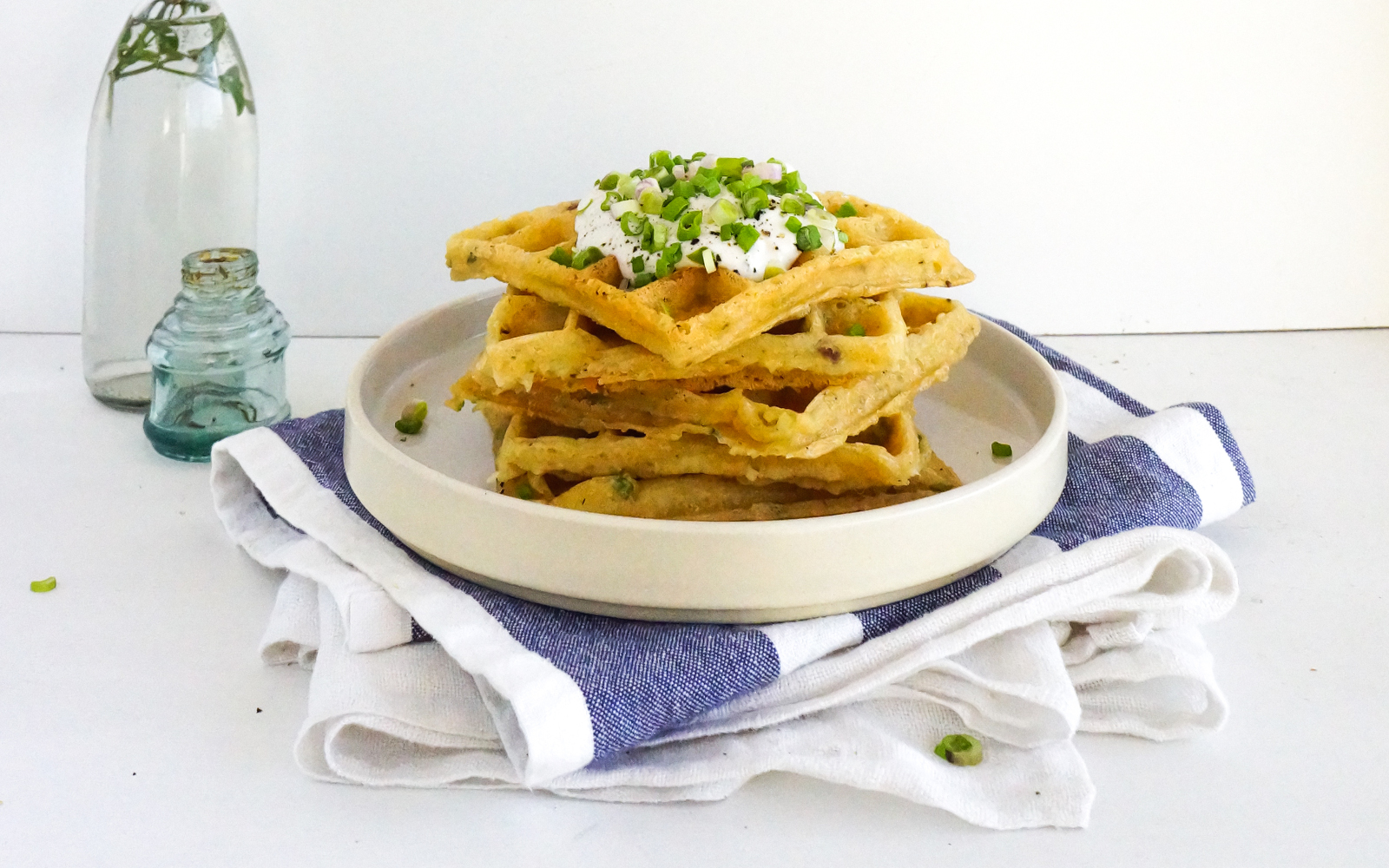 After you taste these Coconut Milk, Spring Onion, and Cheese Waffles, you’ll never go back to sweet waffles again. The coconut milk, vegan cheese, and crisp green onions just go so well together! Top these babies with a dollop of vegan sour cream and some freshly cracked black pepper and dinner is served! 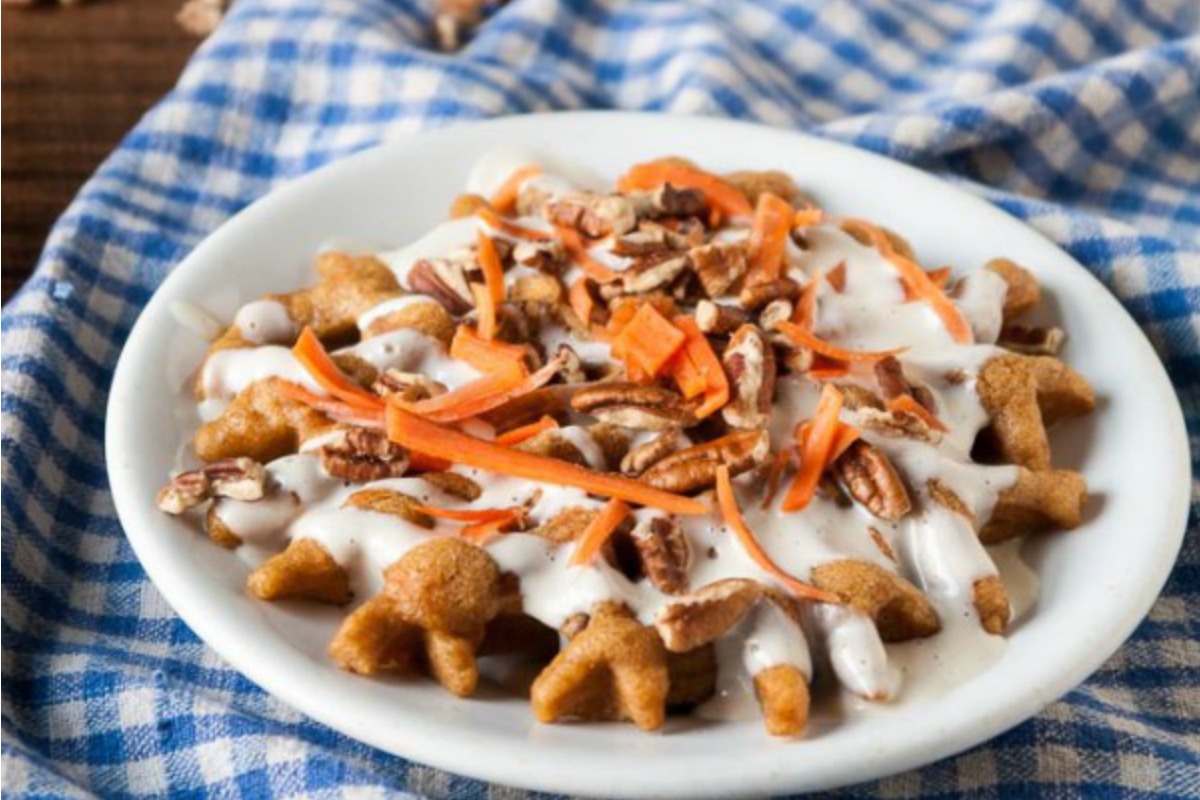 Breakfast will never be the same after you try these Carrot Cake Waffles With Cream Cheese Frosting. The cream cheese frosting here isn’t necessary, but it also is, if you know what we mean — you can never go wrong with frosting. This recipe uses pecans, which add a subtle nuttiness to these sweet and crisp waffles. 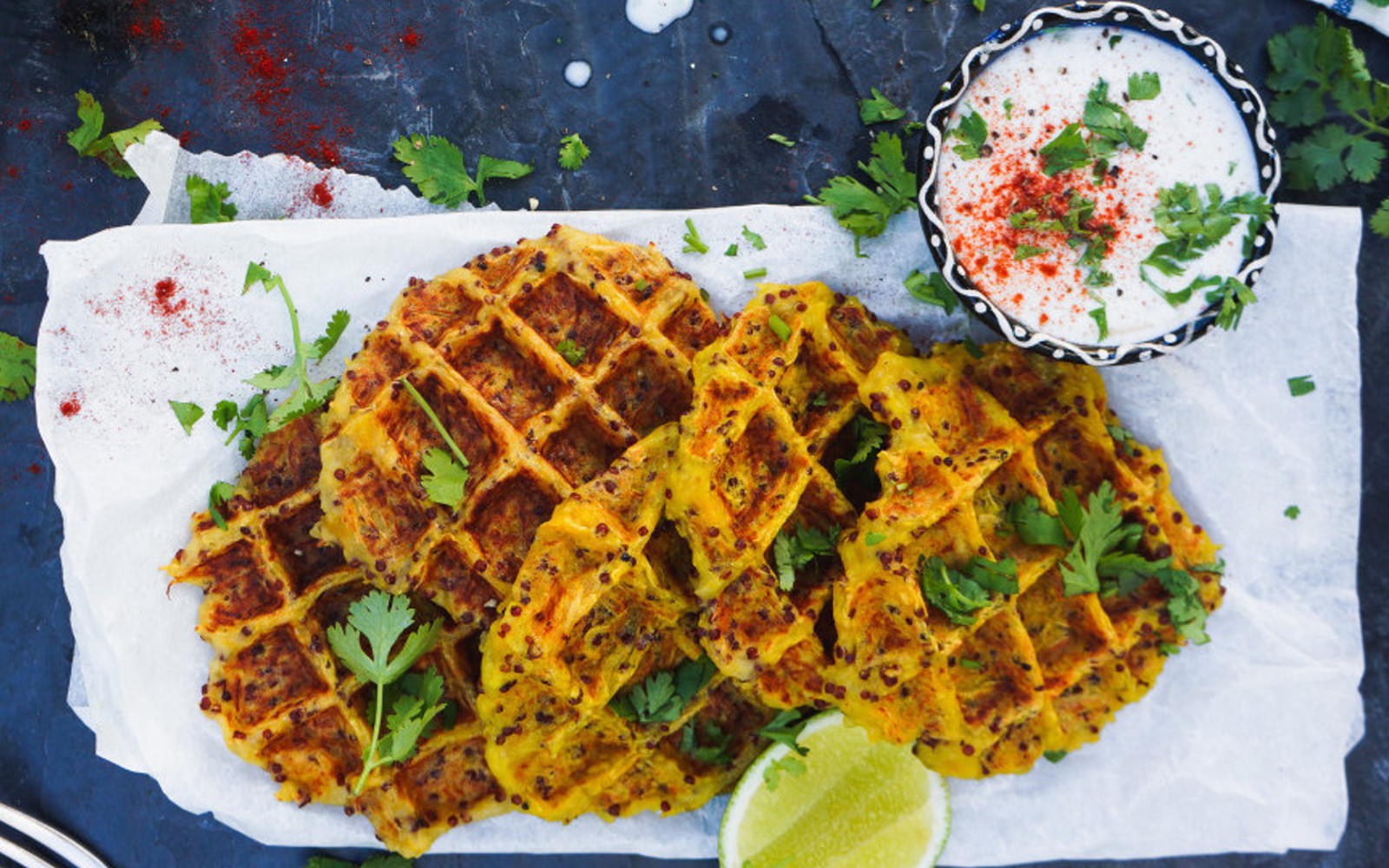 This Spaghetti Squash and Quinoa Savory Waffles are amazing. The outside is crisp while the inside is light and fluffy. These unique waffles pair perfectly with the accompanying coconut cilantro sauce. If you don’t have a waffle iron, the batter can also be flattened and cooked like veggie patties. 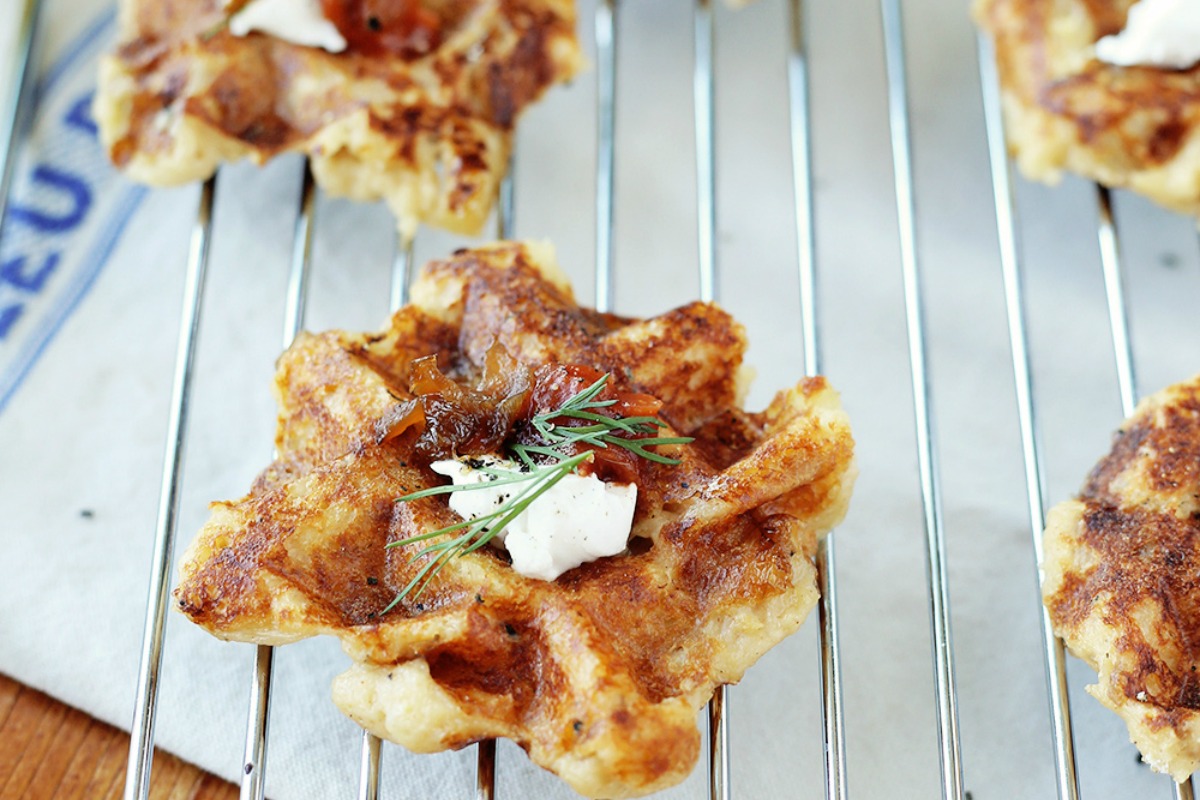 Don’t be fooled by the dull, potato-y colors; we guarantee you that these Simple Mashed Potato Waffles are sure to brighten up your potato and waffle-craving taste buds. They’re moist and crispy on the outside, warm and deliciously creamy on the inside. These potato waffles also go great with salsa, vegan cream cheese, and caramelized onions (gotta love them onions!). The end result reminds us of a beautiful medley of mashed potatoes, rosti, and hash browns. 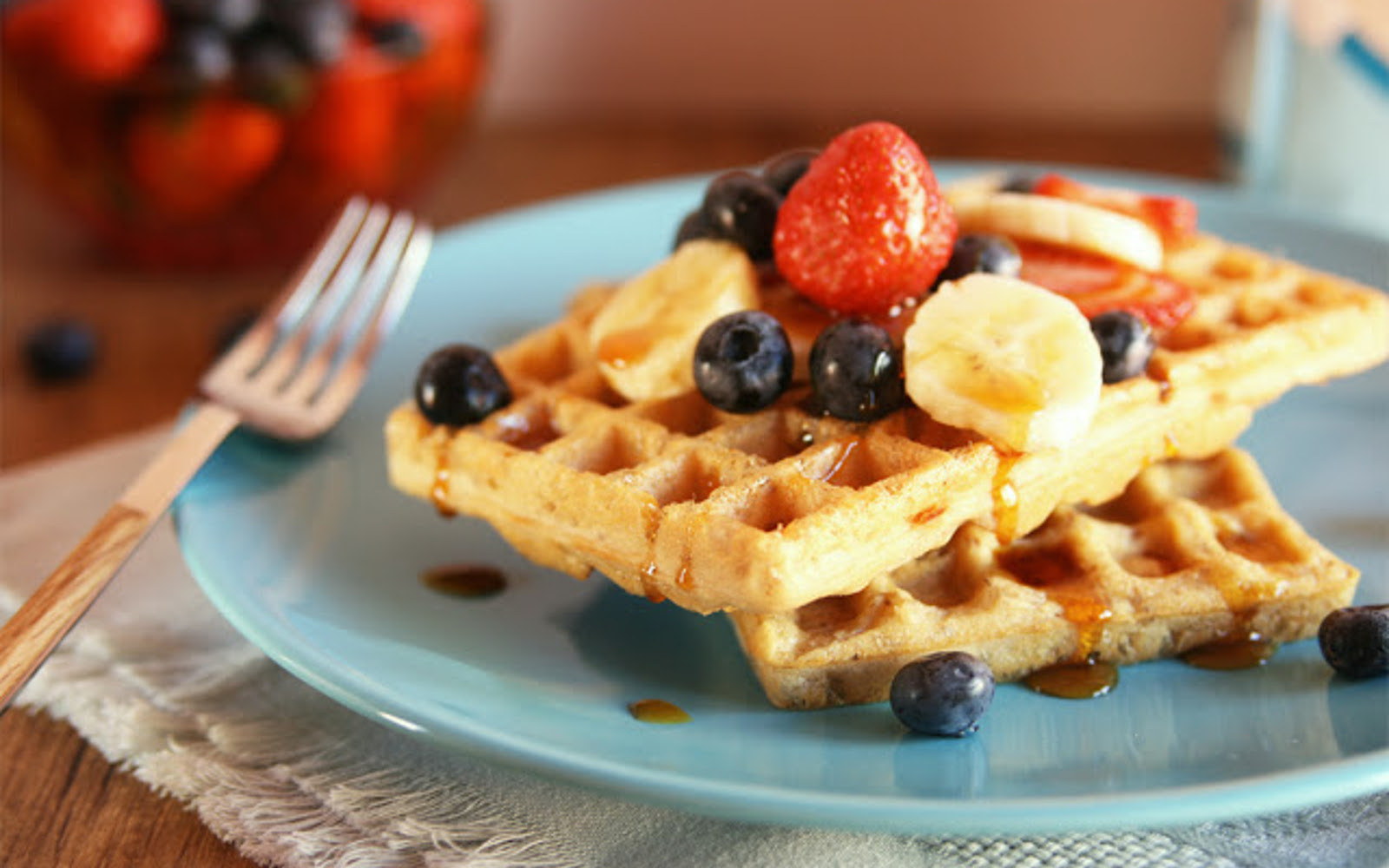 These wholesome Red Lentil Waffles have an interesting nutty and slightly earthy flavor. They’re deliciously crispy on the outside, yet light and soft on the inside. Since they’re made with red lentil flour, which has a decent amount of protein, you can eat these and feel like you’re indulging, when in reality you’re getting a nice dose of nutrition. Life hack!

Love waffles? Check out The Ultimate Guide to Vegan Waffles! Then, tell us about the best vegan waffles you’ve ever had in the comments