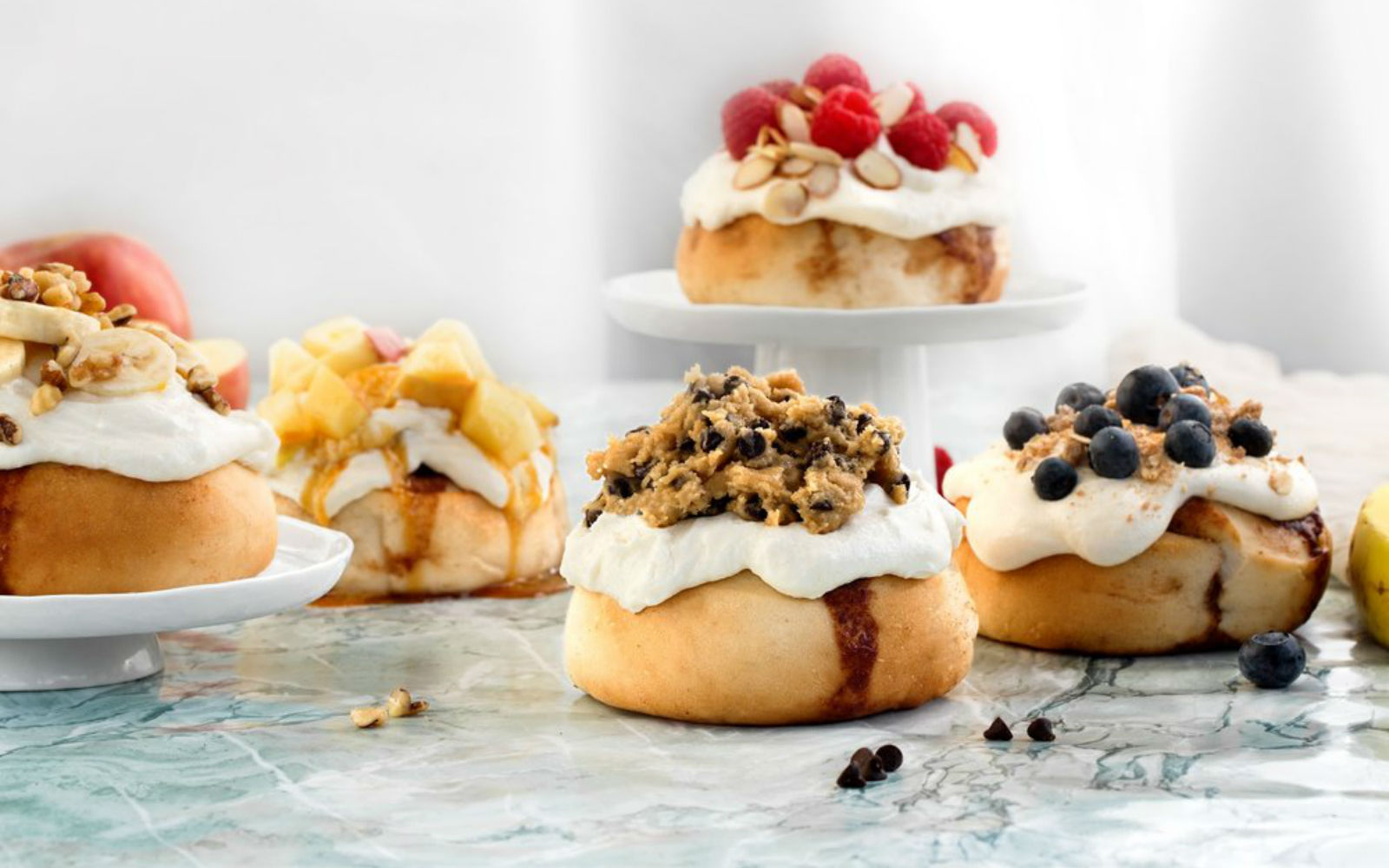 You know what never goes out of style? Breakfast pastries. In particular, cinnamon rolls are a classic, comforting treat. As much as we love nutritious kale salads and snacking on gut-friendly fermented broccoli, there’s a reason we don’t give those foods to friends and family as a gesture of our warmth and love. We love cinnamon rolls because they’re delicious, and taste like a hug.

So when we learned that a California-based vegan shop named Cinnaholic recently opened up in the Echo Park neighborhood of Los Angeles, we found ourselves drooling immediately. Customers can choose from a variety of fun and creative vegan frosting flavors (hello, cake batter, banana cream, and amaretto frosting!) for their customized plant-based cinnamon rolls.

In addition to Cinnaholic’s signature cinnamon rolls, customers also have the option to buy a slew of other vegan options to take home and enjoy.

These bite-sized baby cinnamon buns are adorable and the perfect treat to share with a friend.

Make Your Own Cinnamon Flavored Treats at Home

If you’re not in Los Angeles, don’t let that stop you from making your own delicious cinnamon-flavored delights from the comfort of your own home. We had a quick browse through our Food Monster App, and even though it was hard, we managed to choose four plant-based cinnamon recipes to share with you now. You’re not going to want to wait for a second longer to start making these.

Let’s begin with this classic recipe for plant-based Cinnamon Rolls by Koko Brill.

We would be remiss if we didn’t provide you with a classic recipe for vegan cinnamon rolls. Make a huge batch of these and freeze the ones you don’t consume right on the spot.

Enjoy these gluten-free Cinnamon Churros With Chocolate Ganache by Holly Jade any day of the week.

You can now enjoy one of your favorite street foods from the comfort of your own kitchen! These churros can be enjoyed with a divinely rich dark chocolate ganache that makes the treat all that much more indulgent. These cinnamon churros would be great served at a party, summer BBQ, events … anything, really. So what are you waiting for?

Get your daily chocolate dose in with these Chocolatey Cinnamon Rolls in Tortillas by Maya Sozer.

Cinnamon rolls, made literal, by using tortillas. The tortillas are wetted using a wonderful cashew cream, all spiced up with cinnamon. This skips the dough process in its entirety and since tortillas are already cooked, there is minimal baking involved.

These Chewy Cinnamon Roll Blondies by Sara Grandominico are perfect to take with you on-the-go.

These chickpea-based cinnamon roll blondies are so perfectly chewy and thick, delivering all the powerful flavor of a rich cinnamon roll. Date paste and unsweetened applesauce provide richness and moisture. These ingredients keep the blondies from turning out dry! Another key ingredient in the blondies is the thick ribbon of cinnamon swirl on top. All natural sweetness, here! It’s a simple mix of date paste with a heavy dose of cinnamon added. You’d NEVER know they’re actually healthy.

If you’re interested in finding some more delectable vegan recipes, then we highly recommend downloading our Food Monster App, which is available for both Android and iPhone, and can also be found on Instagram and Facebook. The app has more than 8,000 plant-based, allergy-friendly recipes, and subscribers gain access to ten new recipes per day. Check it out!