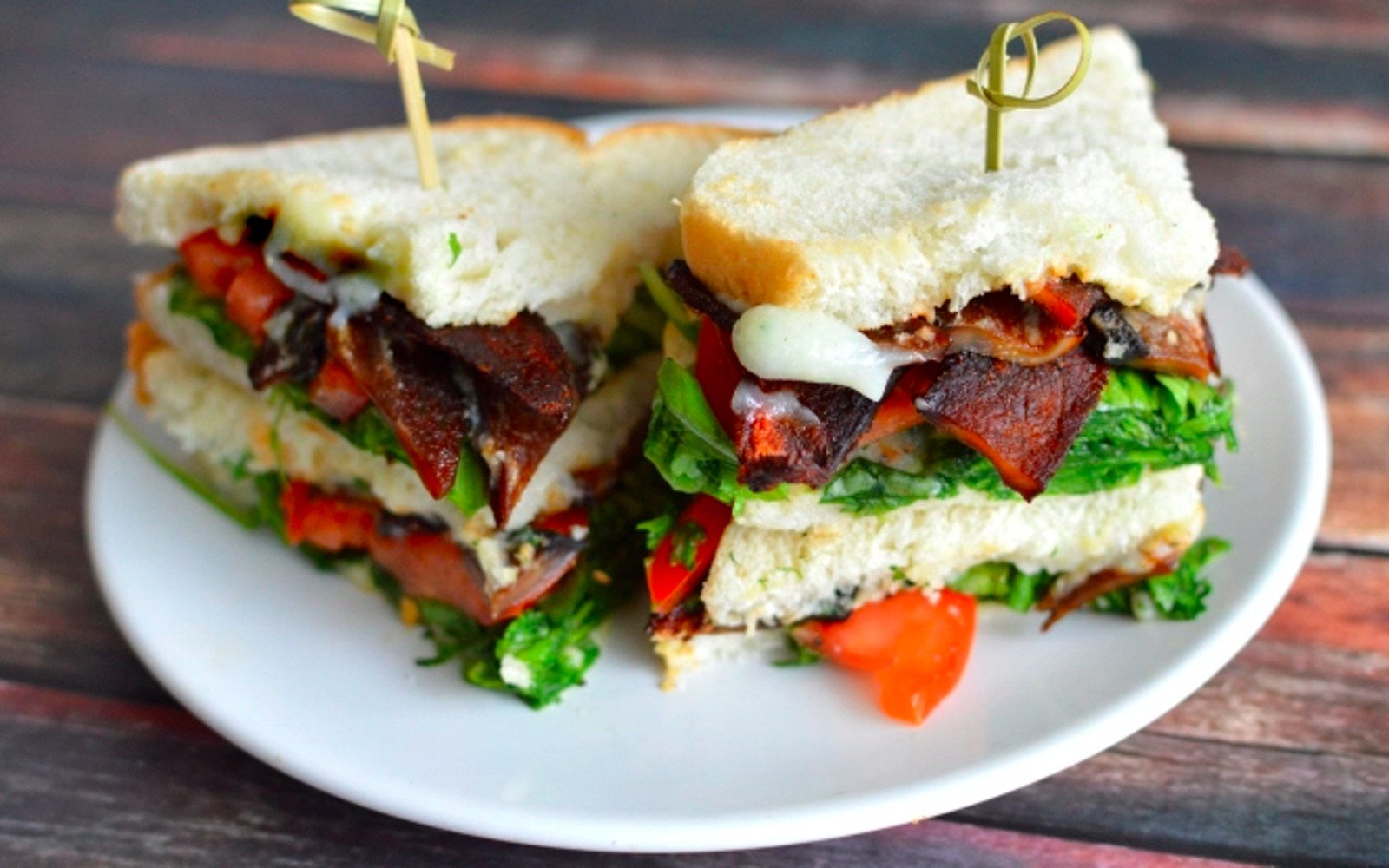 They say “everything is better with bacon” but have you ever wondered if that’s really true? Bacon adds savory, umami, and smoky flavors to our dishes, so it’s no wonder why it shows up in everything from sandwiches to the top of an ice cream sundae. If you’re looking to try more plant-based foods, you might be worried that that means giving up bacon for good. Well, we love to be the bearer of good news: you don’t have to.

Even when eating plant-based, you can still have “bacon” — but make it veggie bacon. There are so many ways to make bacon out of plants; after all, all we need is a similar crispy-chewy texture and the familiar smoky flavor. Plant-based bacon can be made out of tempeh, tofu, coconut, eggplant, mushrooms, and even beets. We can make bacon out of so many different plants, it’s tough picking out what kind to try first. Pro-tip: they all taste amazing.

Try these 15 Veggie Bacon Filled Recipes and then here are 15 more recipes that will show you everything is better with veggie bacon. 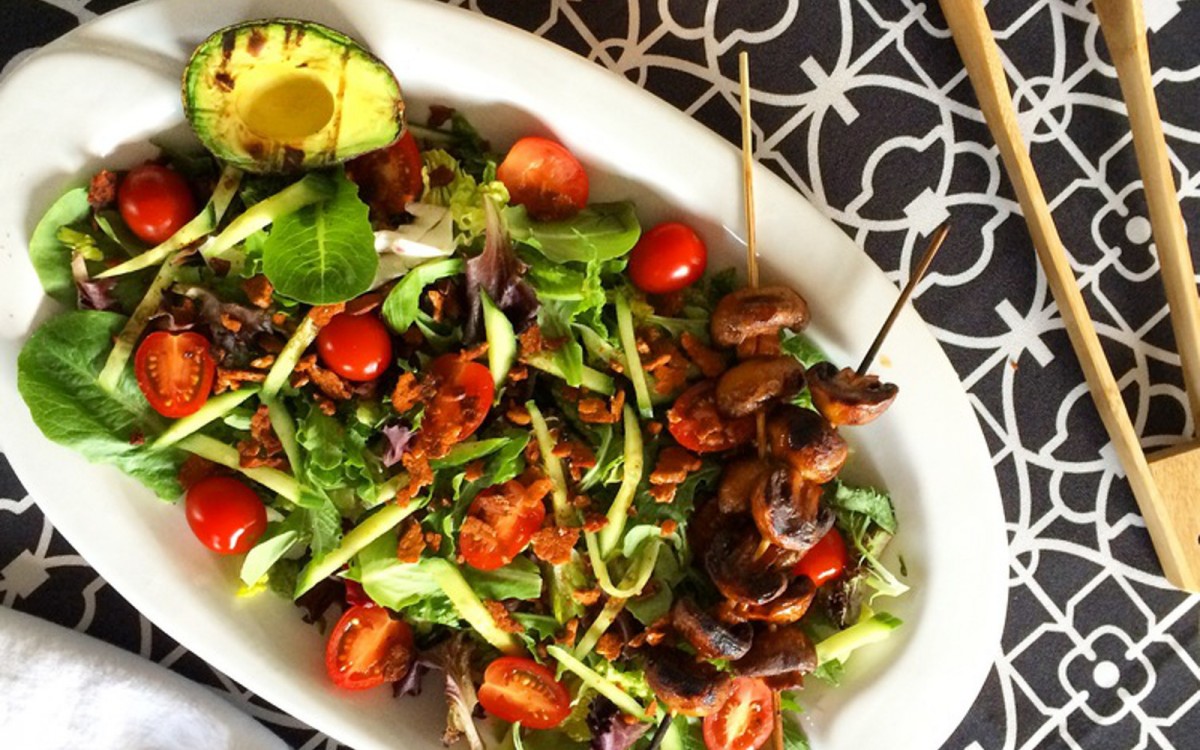 If you’re the type of person who likes a lot of stuff going on in their salad, this Tempeh Bacon Salad With Marinated Mushrooms is the recipe for you! Crunchy lettuce, tempeh bacon, tomatoes, marinated mushrooms, creamy cashew, and sun-dried tomato dressing, — the list goes on. This salad is savory, delicious, and nutrition-packed! 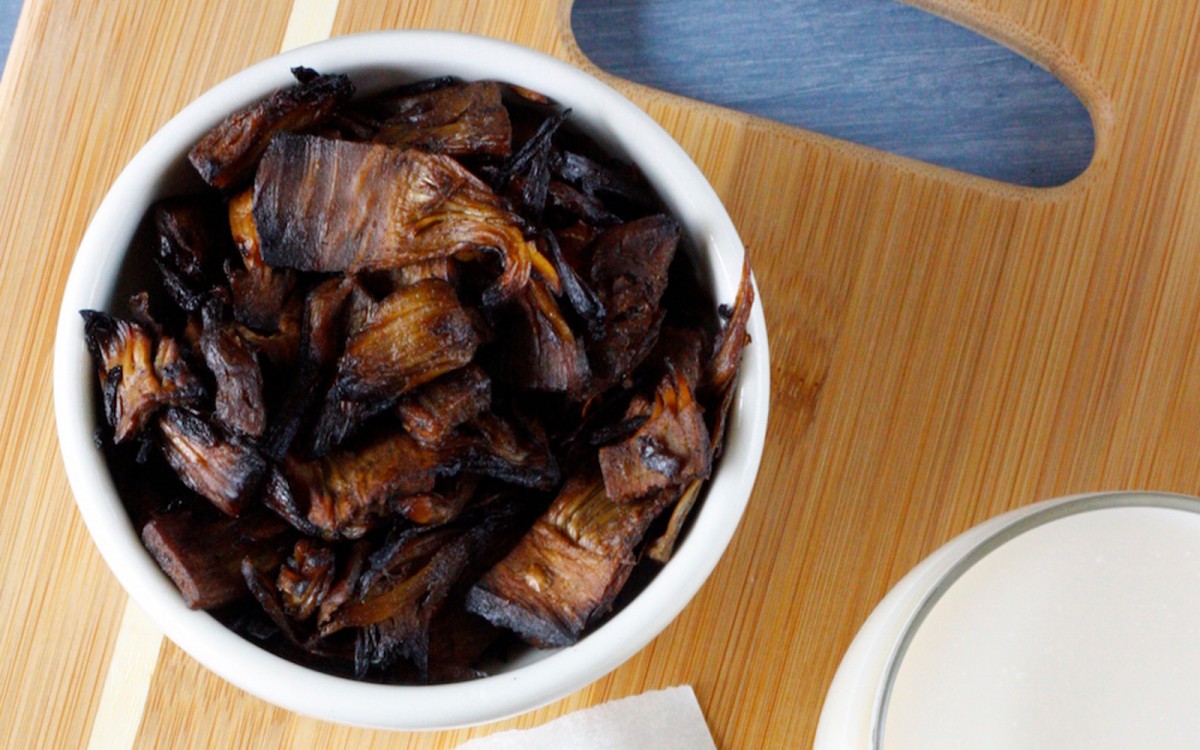 Who would’ve thought that you could take a fruit and make it taste like bacon? Well, with jackfruit, it’s possible! This tender, fleshy fruit soaks up flavors wonderfully, so when marinated in a smoky, pepper-maple mixture, it tastes just like the meaty favorite. Use this Jackfruit Bacon on top of salads and baked potatoes or as a breakfast side dish. 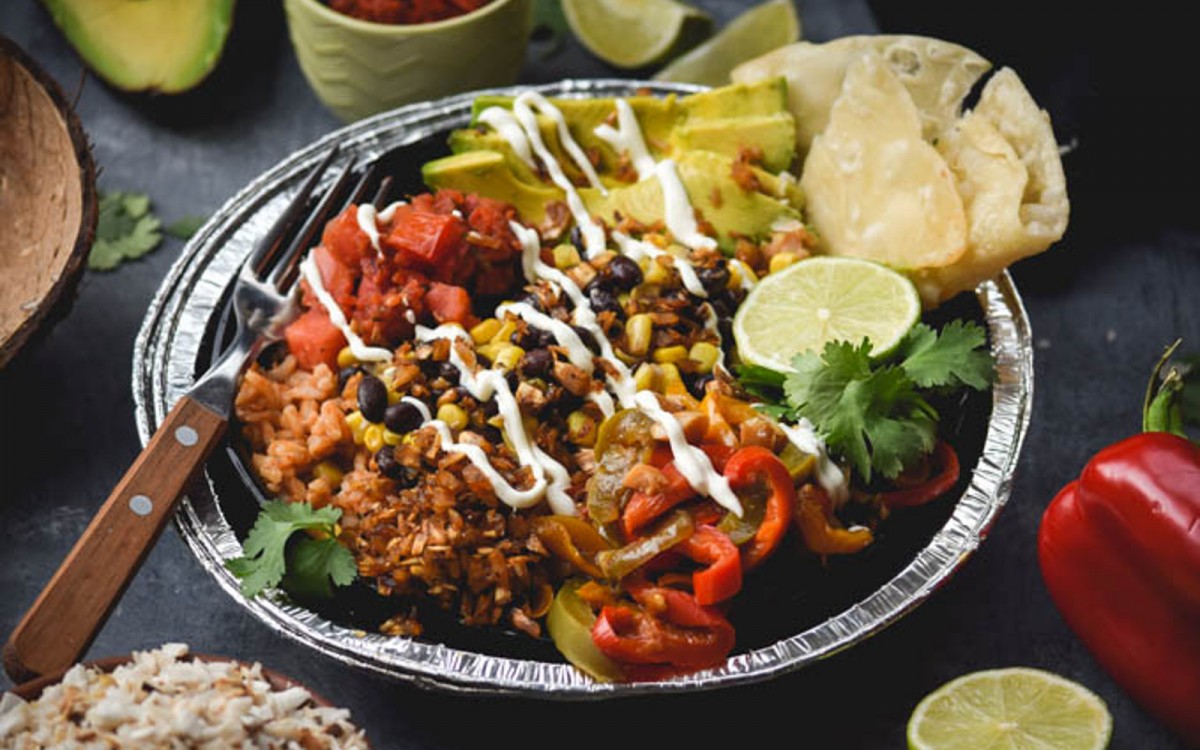 Smoky coconut bacon, warm black beans and corn, and lime roasted bell peppers are all layered on top of each other in possibly the most epic Mexican-style veggie bowl ever. This Layered Fiesta Taco Bowl is warm, zesty, citrusy, and above all, delicious! Top this baby with coconut sour cream, guacamole, and cilantro and you’ve really got yourself a fiesta. 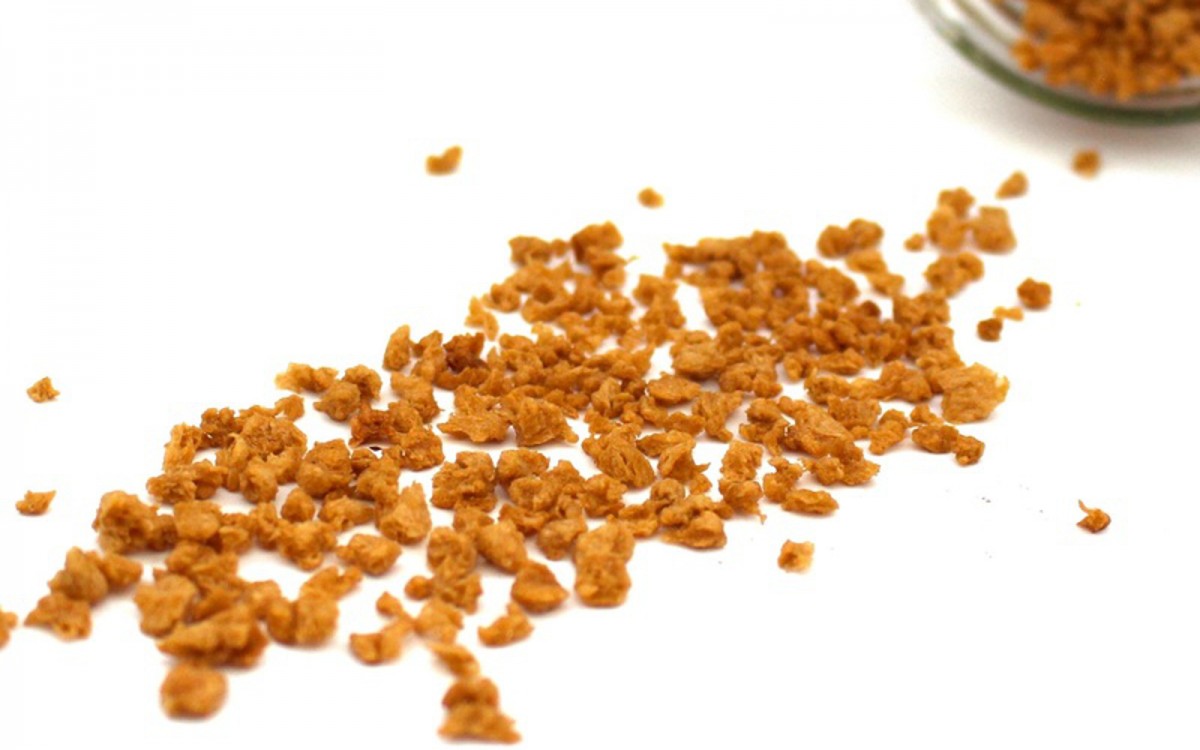 Did you know that many of the bacon bits sold at supermarkets are actually vegan? It’s true. But, everything tastes better when it’s homemade, like this recipe for Homemade TVP Bacon Bits. It uses textured vegetable protein, a little salt, liquid smoke, and boiling water to create a deliciously smoky topping for your salads and baked potatoes. Get more out of your bacon! 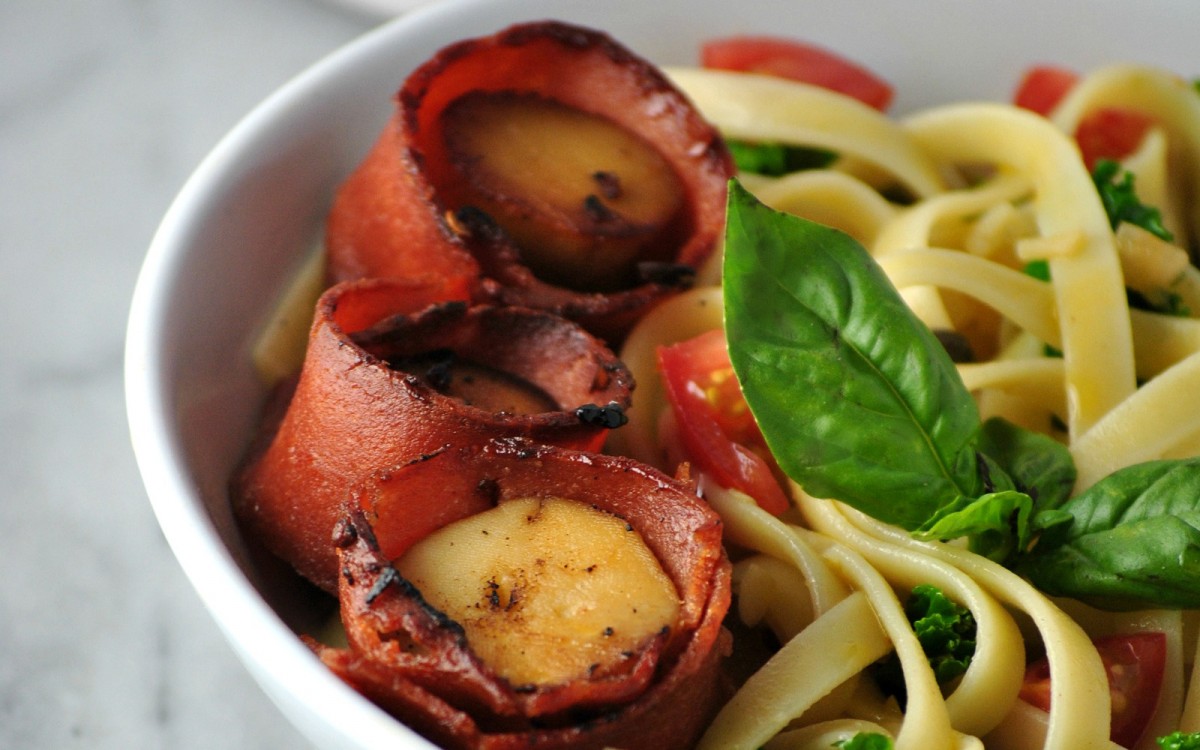 What? Bacon-Wrapped Scallops are vegan? Yes! In this recipe, succulent Oyster mushrooms are cooked until they achieve a texture similar to scallops and then they’re wrapped in a smoky veggie bacon. While they look fancy and intricate, they are actually super easy-to-make! Serve with fettuccini pasta for a deliciously unique dish. 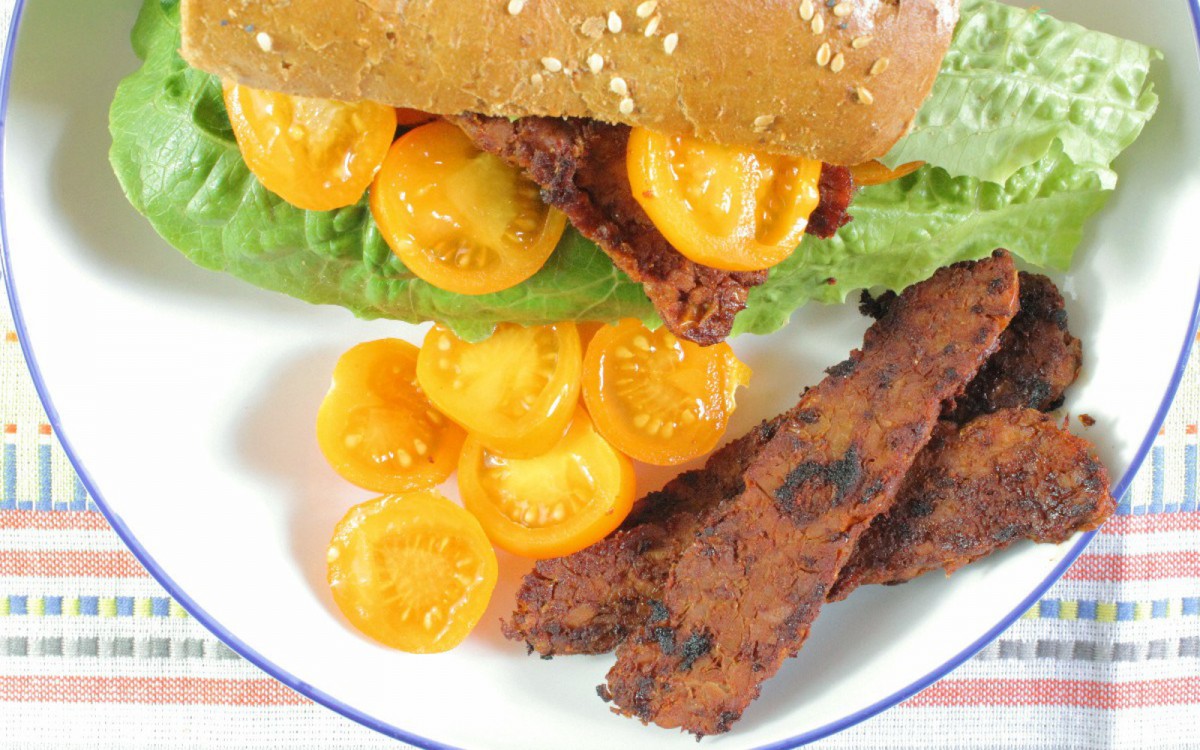 Absolutely delicious, smoky, and crisp, this Tempeh Bacon is a cinch to prepare. Once it’s ready, simply stack it in sandwiches along with your favorite fillings. If you have tempeh bacon left over, use it atop a fresh garden salad or even in soup! 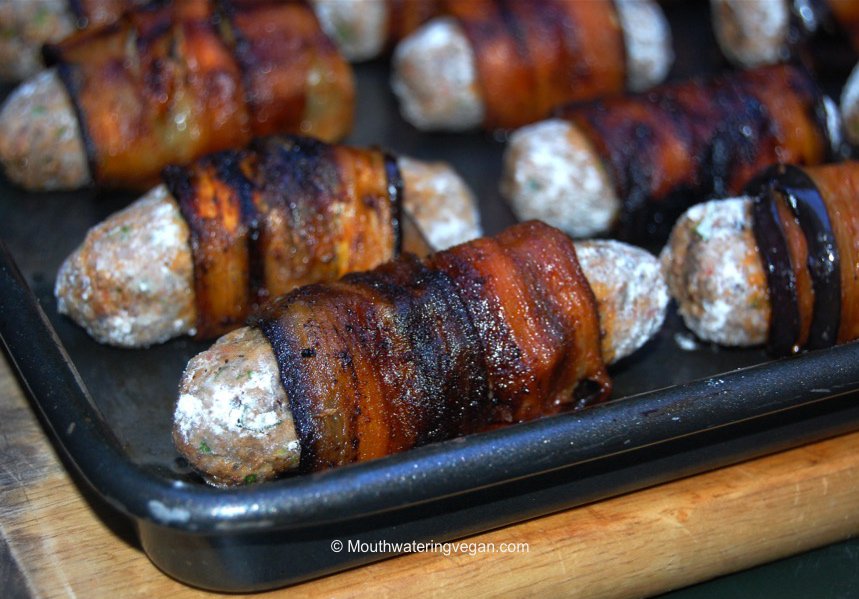 A Glamorgan sausage is a traditional Welsh sausage, with the main ingredients being leek and cheese. These Homemade Glamorgan Sausages are inspired by the “devils on horseback” recipe, so they are wrapped in eggplant bacon. Could it get any more delicious? We don’t think so. 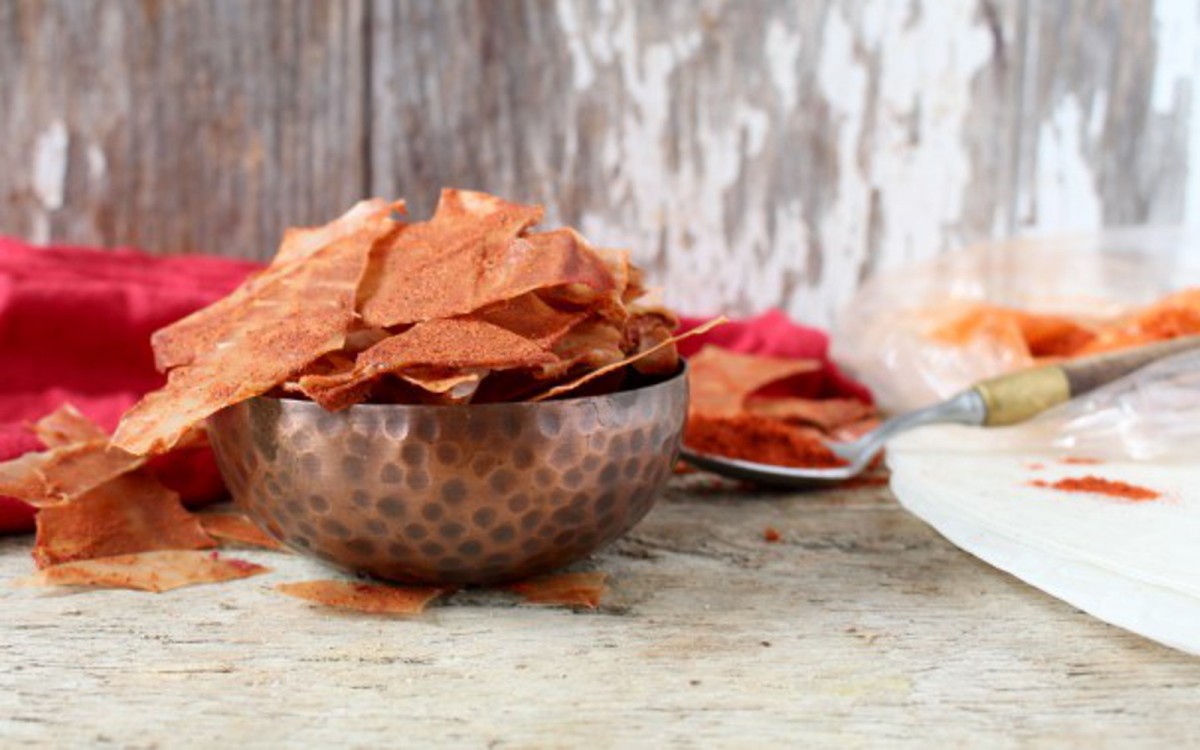 Yes, this is real! Smoky and salty, this Rice Paper Bacon is made by seasoning rice paper rolls in a smoky paste and then dehydrating until crispy. It’s the perfect addition to your salads, soups, and sandwiches, or for a light snack that’s big on flavor! 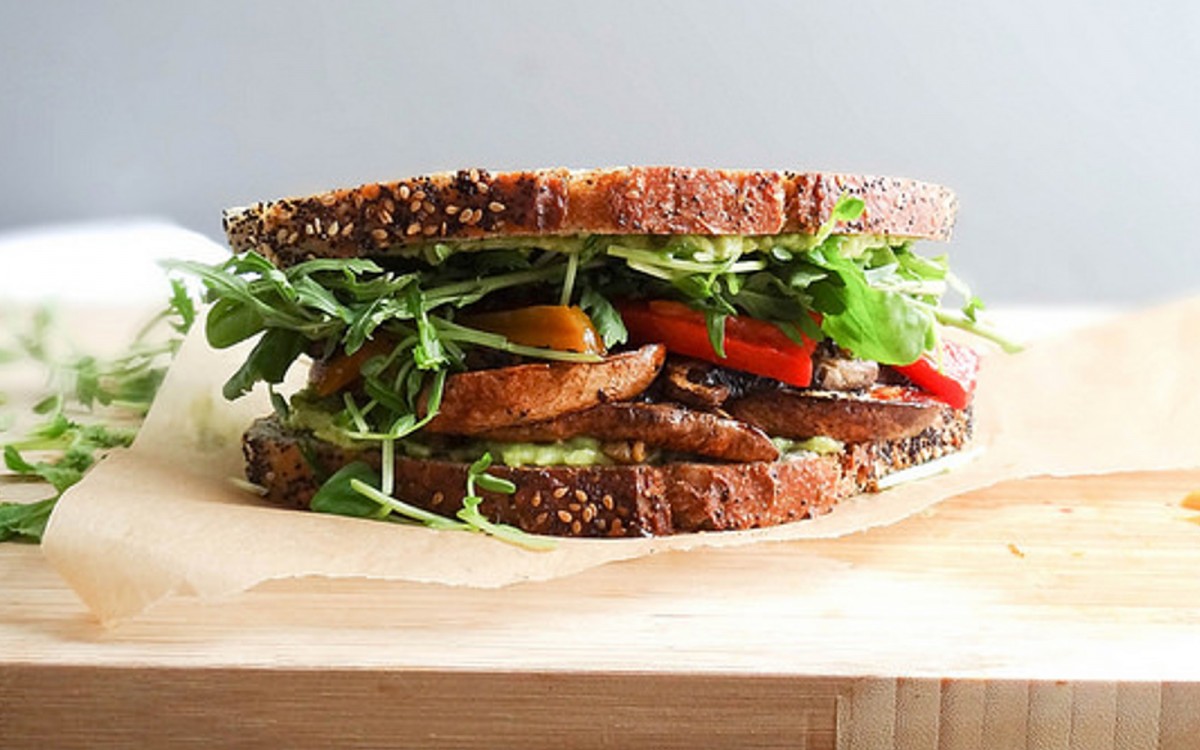 A sandwich doesn’t ever have to be boring; it can be bright, beautiful, and absolutely delicious. This Smoky Portobello, Bacon and Avocado Sandwich is all those things and more. A combination of Smoky Portobello bacon, creamy avocado spread, grilled vegetables, and greens served between two slices of your favorite bread fills you up, but doesn’t leave you feeling heavy or weighed down. It’s a meal for lunch, dinner, and all seasons. 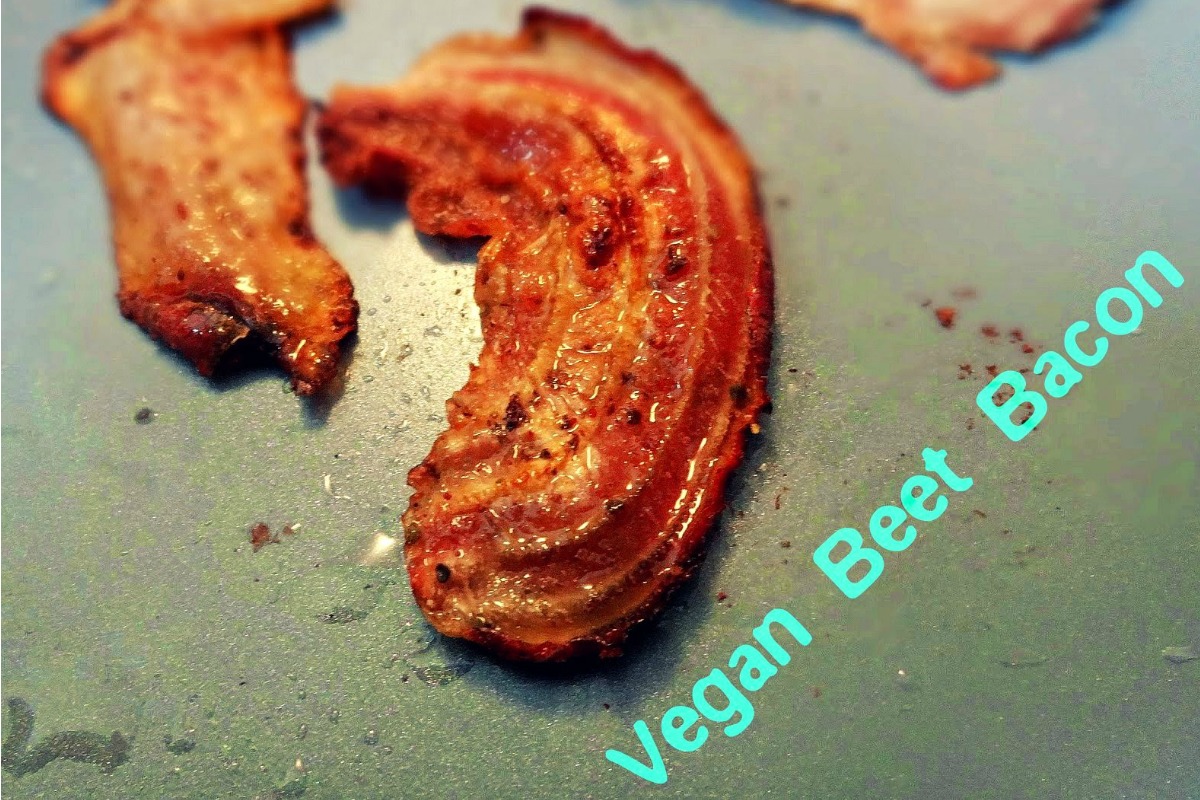 It’s amazing how many different ways we can make veggie bacon. Made with beets, smoky spices and a lot of love, this Beet Bacon is amazing on its own or sitting pretty on your favorite veggie burger. Aren’t you glad you learned beet bacon is a thing? We are, too. 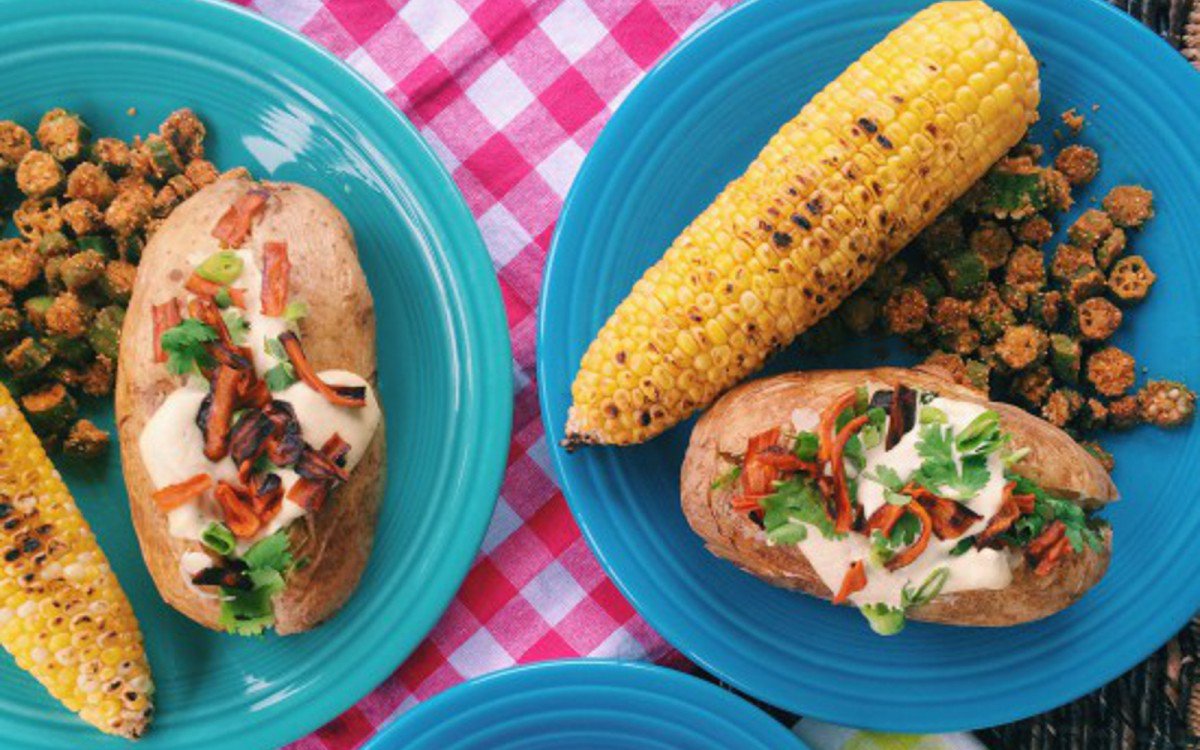 Potatoes and bacon both get such a bad rap. But they can both be very healthy if prepared a certain way. Take this Loaded Baked Potato With Carrot Bacon, for example. Usually loaded baked potatoes have an obscene amount of butter, sour cream, and bacon. However, sub in vegan butter, a cashew-based sour cream, and carrot bacon, and boom — you have a healthy recipe! 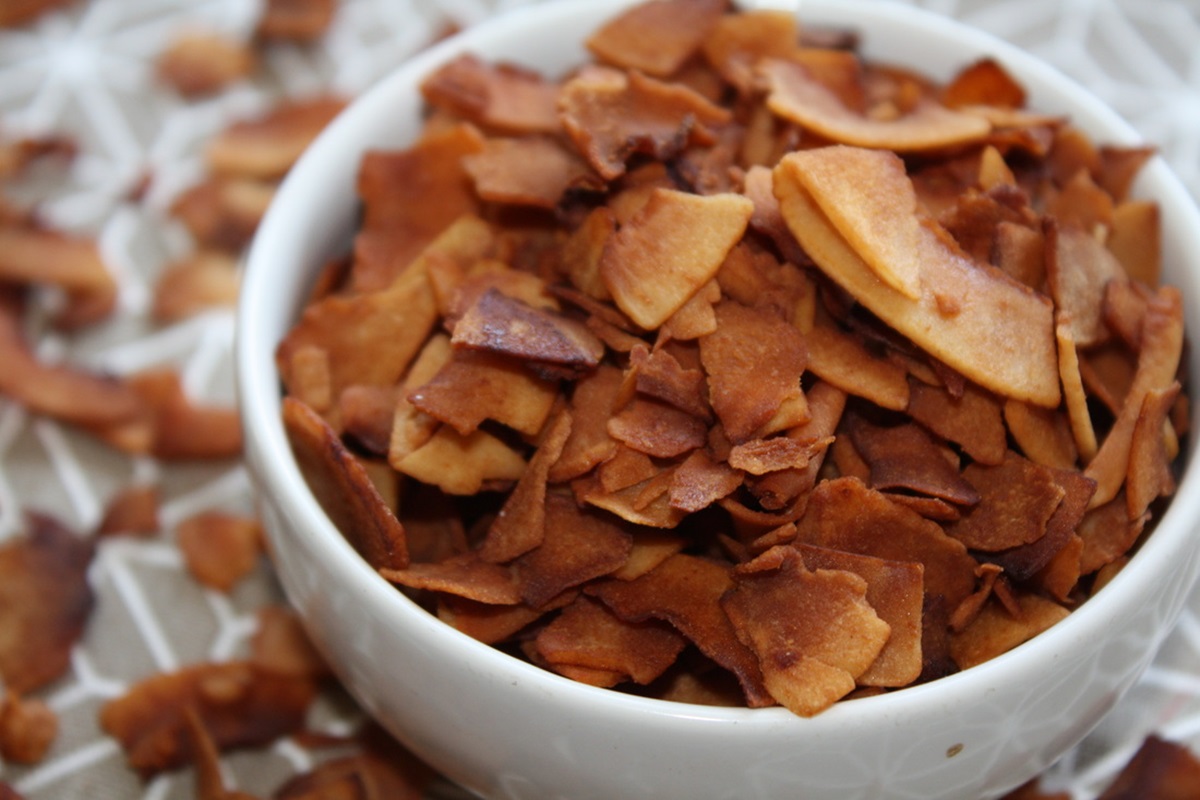 This Coconut Bacon is a great addition to salads, sandwiches, soups … even desserts! Be warned — it’s addictive. You’ll get to the point where you’ll barely be able to walk by a bag without grabbing a handful of the stuff … or is that just us? The recipe is super easy to make, and a great way to teach non-vegans that we make damn good food too! 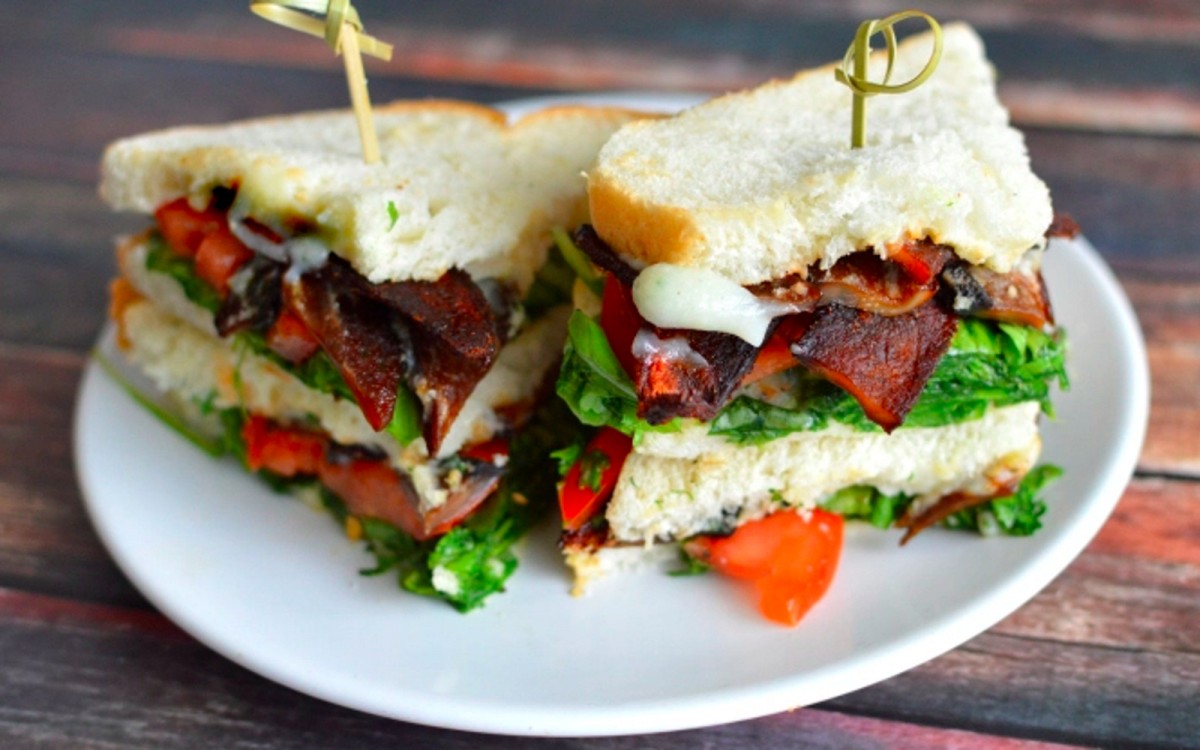 This Ranch BLT With Portobello Mushroom Bacon is the sandwich to end all sandwiches. Ranch dressing on a BLT takes it to the max but the Portobello mushroom bacon is the star of this show. The bacon is sweet while also being wonderfully smoky and salty. Yup, this is your new favorite sandwich. 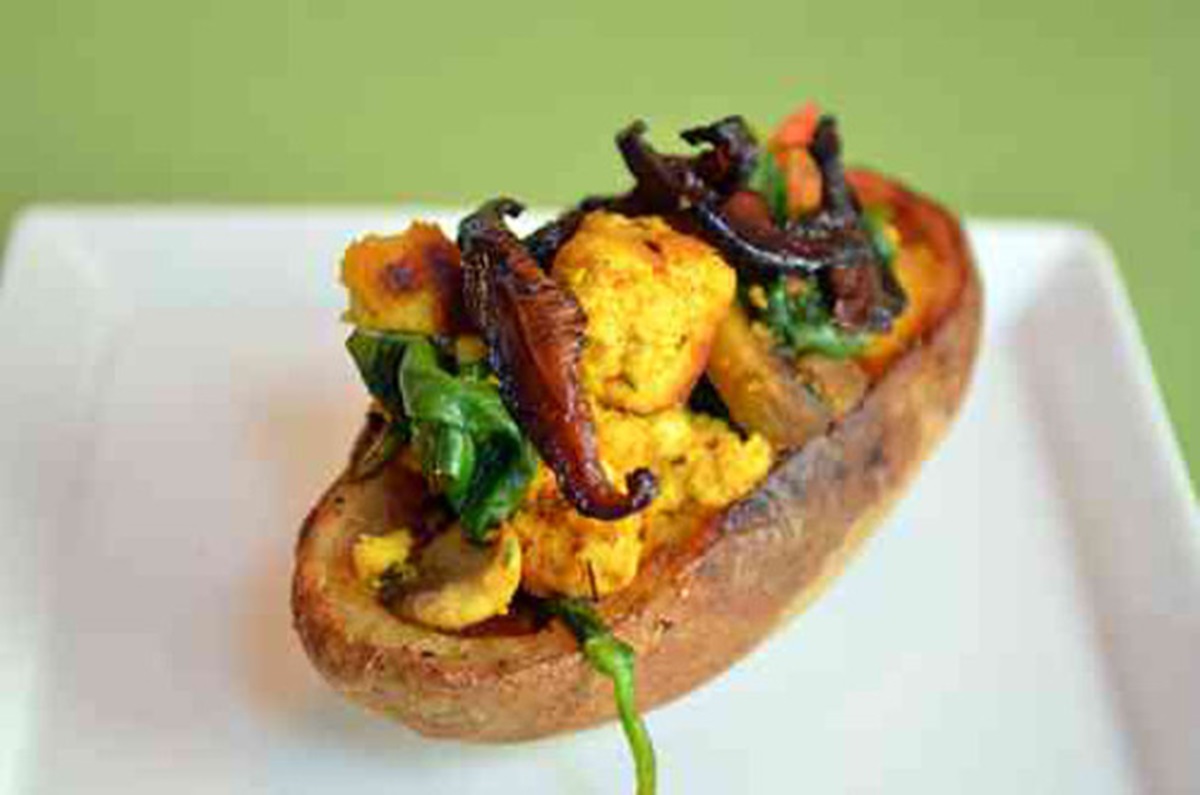 Thanks to the little funk that is inherent in the shiitake mushrooms, the flavor is boosted in this Shiitake Bacon. Mushrooms, being the sponges they are, end up saturated with layers of taste. This is delicious on sandwiches or on its own. Bring on the funk! 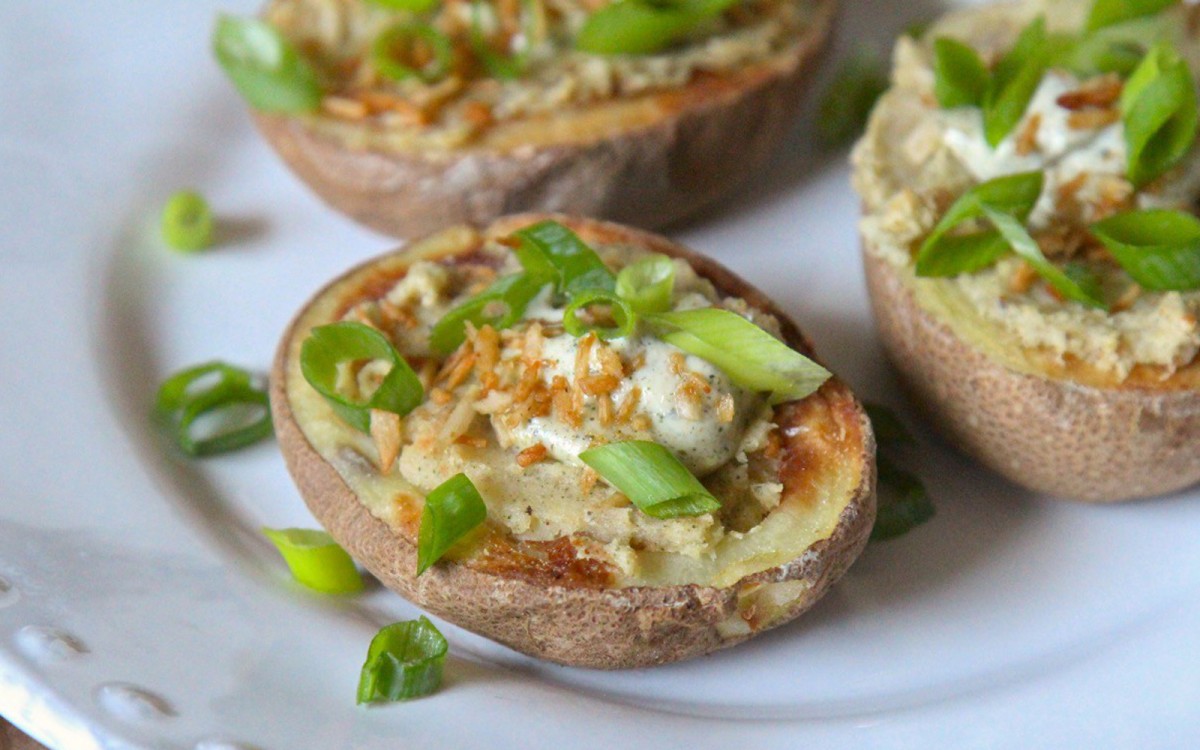 Say hello to the perfect side dish. These Twice-Baked Potatoes with Hemp Sour Cream and Maple Coconut Bacon are beyond amazing. They are stuffed with an herby sour cream made from hemp seeds and they’re topped with maple coconut bacon. Not only would these make a great side to any dinner or barbecue, but they’d also be right at home on a brunch plate.

If you thought your love affair with bacon was over, we hope these recipes changed your mind. They show just how delicious and easy it is to make all kinds of veggie bacon.