In a recent report, the World Health Organization (WHO) cracked down on cigarette butts as the main cause of microplastic pollution. The report stated that one cigarette butt can pollute as much as 100 L (27 gallons) of water, and if a mere 25 percent of the global 4 trillion littered butts per year end up in the waterways, 100 trillion liters of water will be polluted. In addition to the human health risks, new research shows that cigarette butts can reduce germination success, root biomass, and root-to-shoot ratios of some plants. 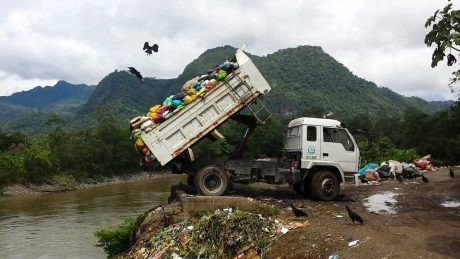 To raise awareness about the threat microplastics pose to our natural environments, The United Nations Environment Programme (UNEP) has launched a partnership with the Secretariat of the World Health Organization Framework Convention on Tobacco Control (WHO FCTC). The UNEP’s Clean Seas campaign, a global coalition comprised of 63 countries devoted to ending marine plastic pollution, has already racked up over 113k pledges since its rollout earlier this year.

Cigarettes are not only poisoning our planet, they are poisoning our health. It is widely accepted that cigarettes cause tobacco-related illnesses, but did you know that new research shows that people are inhaling microplastics through the air, consuming them through food and water, and absorbing them through the skin? Microplastics have even been found within our lungs, livers, spleens, and kidneys, and in the placentas of newborn babies.

Scientists from the International Atomic Energy Agency (IAEA) are proposing the use of ionizing radiation to increase the volume recycled of plastic and transform more plastic waste into reusable resources as part of their NUclear TEChnology for Controlling Plastic Pollution (NUTEC Plastics) initiative.

While showing potential in the processing and recycling of plastics, this research is still experimental and, therefore, heavily dependent on member states for funding. With constant advancements in science, other promising research reports a novel method of transforming used cigarette filters into supercapacitors.

Everyday citizens are also joining the fight against microplastics as the European Commission registered a European Citizens’ Initiative (ECI), ‘Call to achieve a tobacco-free environment and the first European tobacco-free generation by 2030′ on 24 August 2022. The National Council Against Smoking’s ‘Ban The Butt in South Africa’ petition calls on the SA Department of Environmental Affairs to introduce legislation that requires tobacco companies to remove cigarette filters or make them fully biodegradable, as well as ensure the safe disposal of all cigarette waste material.

We applaud the local governments that have taken direct action to curb the health threat of cigarettes when Beverly Hills and Manhattan Beach, California became the first and only jurisdictions in the U.S. to eliminate the sale of commercial tobacco on 1 January 2021.