How E-Cigarettes and Vaping Damage the Environment and Your Health 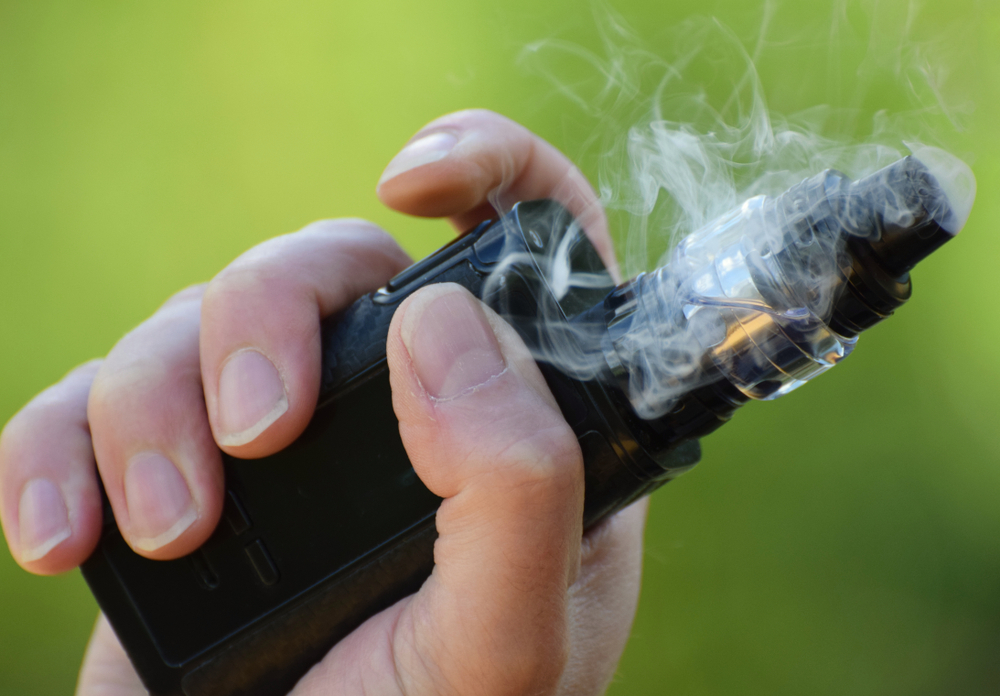 A Texas native who was only 15 years old died in relation to vaping.

This is just one of 2,600 hospitalizations that have resulted from vaping and the truly terrifying thing is that there are fewer cases being reported than actually documented. Yet, it’s not just the human harm that makes vaping and vaping products dangerous — even though this is a huge component — it’s also the environmental impact that ticks the needle closer to red.

From the single-use plastic pods that fill up our landfills and pollute the oceans, to the heavy metals used to create the product and then are expelled into the environment.

Everything about vaping wreaks havoc with the health and wellness of bodies and Earth, all for the simple satisfaction of an addiction and millions of profit in the pockets of big companies.

What’s Vaping All About?

If you don’t smoke and don’t plan to, then most likely you wouldn’t ever need to know. With that said, as vaping becomes more popular, understanding the far-reaching effects of these products is hugely important.

Vaping refers to the “act of inhaling and exhaling the aerosol, often referred to as vapor, which is produced by an e-cigarette or similar device.” This habit is often compared to smoking cigarettes, yet it’s quite different as “e-cigarettes do not produce tobacco smoke, but rather an aerosol, often mistaken for water vapor, that actually consists of fine particles.”

Another thing that sets cigarettes and vaping apart is the “device” used to create the “smoke” and high sensation.

A vaping device “consists of a mouthpiece, a battery, a cartridge for containing the e-liquid or e-juice, and a heating component for the device that is powered by a battery.” Basically, you’re sucking on a mechanical contraption. How does it work? First off, that battery “heats up the heating component, which turns the contents of the e-liquid into an aerosol that is inhaled into the lungs and then exhaled.”

Of course, as the habit becomes wildly more popular — among youths and adults — new devices are constantly brought onto the scene offering different types of experiences.

One of the newest vaping products that “accounts for about 72 percent of the market” is the “JUUL, which is a small, sleek device that resembles a computer USB flash drive.” The JUUL has become the choice of … wait for it … middle schoolers. These young kids enjoy the “subtle design” which makes it super easy to hide in their backpacks at school.

What do know about JUUL? These vaping devices contain” a high dose of nicotine, with one pod or flavor cartridge containing about the same amount of nicotine as a whole pack of cigarettes.”

Now we know how the aerosol is created within the vaping device, but what exactly are people sucking into their lungs?

We keep mentioning aerosol, so let’s break that mixture down.

The short answer is that it all depends on the type of vape your using. Aerosol contains a bunch of particles that each “contain varying amounts of toxic chemicals, which have been linked to cancer, as well as respiratory and heart disease.”

For instance, those that chose the e-liquid vaporizers are generally receiving a dose of “propylene glycol or vegetable glycerin-based liquid with nicotine, flavoring, and other chemicals and metals.” With that said, the vaping liquids do not contain tobacco, which is how young teens are able to get their hands on them. Other than that, vaping devices can be used to “vape THC, the chemical responsible for most of marijuana’s mind-altering effects, or even synthetic drugs like flakka, instead of nicotine.”

The Science Behind Vaping Injuries and Death

While the vaping tradition started quietly in the late 2000s, the steadily increasing number of injuries related to the practice has begun to catch the attention of the Centers for Disease Control and Prevention (CDC).

Therefore, we finally have some studies showing the dangerous health effects of the habit.

Vaping use and lung-related injuries — referred to as “e-cigarette, or vaping, product use-associated lung injury (EVALI)” — took a quick spike at the beginning. For instance, as of January 16, 2020, “a total of 2,668 hospitalized EVALI cases, including 60 deaths, have been reported” to the CDC.

Why the dramatic epidemic-like reaction?

There have been a couple of possible theories as to why these vaping devices seem to be so much more instantly dangerous.

First off, the CDC published information regarding vaping containing a component called vitamin E acetate, which they believed may be related to many of the lung injuries. Vitamin E acetate is a “synthetic form of vitamin E, and it’s used — safely — in nutritional supplements and skin creams … but it isn’t safe to inhale.” When inhaled, vitamin E acetate creates a “sticky and honey-like” casing that “can hang around the lungs” interfering with their proper function. Vaping companies use vitamin E acetate to thicken or dilute the mixture.

On top of that, another potential culprit for vaping-related lung injuries is the use of “black market or other informally obtained THC-containing vape products.” Tetrahydrocannabinol “is the compound that produces the high feeling in cannabis” and is a popular ingredient in many vaping devices. A recent CDC-based study using around 2,000 cases published in January of 2020 “found that 82 percent of people hospitalized with EVALI reported using THC-containing products.” It’s important to note that 78 percent of participants “said they got” their THC vape products “informally such as from family, friends, dealers, or online.”

Vaping and the Environment

It’s not hard to see that vaping isn’t a healthy habit to pick up. Yet, vaping isn’t just harming your body, it’s also harming our environment.

While there’s not a plethora of data specifically outlining the environmental damage that vaping products are inflicting, there have been a few reserves of data touching upon the impact of JUUL vaping products. As these are obviously the most popular of the vaping devices, they also have been the focus of most of the research.

In April of 2019, the Truth Initiative sought to uncover the impact of JUUL vaping products on the Earth and uncovered three avenues in which vaping is harming our planet.

Plus, many of these pods simply wind up on the ground instead of the trash can.

These pods join the other tobacco product litter, which is substantial. The Truth Initiative explains that “since the 1980s, cigarette butts have consistently comprised 30 – 40 [percent] of all items collected in annual international coastal and urban cleanups.” These single-use plastic pods have now joined the cigarette butt ranks!

“Heave metals” is probably a term you’re familiar with in relation to the drinking and bathing water in your house. In fact, the dangers of heavy metals are so widely recognized that you can purchase heavy metal water testing kits on the shelves of your local drug store.

Heavy metals “are naturally occurring elements that have a high atomic weight and a density at least [five] times greater than that of water.” These include widely recognized toxic compounds such as mercury and lead. Heavy metals are incredibly useful in the industrial, domestic, agricultural, medical, and technological worlds and now they are being used in vaping devices.

While the toxicity of heavy metals “depends on several factors including the dose, route of exposure, and chemical species, as well as the age, gender, genetics, and nutritional status of exposed individuals,” these compounds do contain a “high degree toxicity, arsenic, cadmium, chromium, lead, and mercury.”

Vaping products including e-cigarettes and JUUL products “can leak heavy metals and residual nicotine into the environment,” not to mention that you’re also inhaling from these products directly into your lungs. This little fact could mark e-cigarettes “as both e-waste and biohazard waste.”

The Addictive Quality of Vaping

As mentioned (multiple times), vaping devices — including the most popularly chosen JUUL — use a variety of ingredients including nicotine.

And yes, nicotine is highly addictive.

When it comes to nicotine and vaping, the “more you vape, the more your brain and body get used to having nicotine, and the harder it is to go without it.” This comes along with some pretty severe withdrawal symptoms — such as headaches, anxiety, depression, insomnia, hunger, cravings, and sweating — leading to a return to or increased use of the vaping device. Hence the vicious circle that the vaping companies rely on to get you hooked and keep you coming back for more and more and more.

It’s not just as easy as saying “don’t do it” or stop. Addiction has to be treated by professionals.

First stop, find some resources and get some aid! The National Institute on Drug Abuse for Teens is a great place to start for youths. Other resources for teens and adults include the American Lung Association, BeTobaccoFree.gov, Treating Tobacco Use and Dependence, and the American Heart Association, to name just a few.

Another great avenue to kick vaping is to find healthy alternatives to take its place!

While adults have the knowledge and resources at their disposal it’s truly up to parents to make the right calls for their kids. This includes keeping an eye open for vaping habits and knowing how to tackle them.

First and foremost, when it comes to teenage addiction it’s important to keep an open dialogue in regards to the dangers of vaping. With that said, it’s not about scare tactics because … well … that just won’t work. In a New York Times article, Dr. Suchitra Krishnan-Sarin, a Yale professor of psychiatry explains “the trick is not to try to scare them, because scare tactics don’t work at this point … but explaining how these products are making them addictive is the way to go.”

For adults and youth, you can always try a mindfulness approach. When it comes to addiction, it’s all about the brain. The brain has “a built-in reward-based learning system.” If your brain likes the way something feels, then it will require more of said thing. In regards to vaping, the “nicotine binds to receptors in the brain [and] it triggers a rush of dopamine, a neurotransmitter that plays a role in motivating behavior.” Mindfulness can actually help break this cycle. It’s important to find a guide to help you through the mindfulness approach, whether it’s a book or an actual person.

Lastly, get super involved in both healthy food and healthy physical activity.

On the Drug Rehab website Chris Elkins, M.A. extols the importance of proper nutrition and physical activity in beating addiction, “eating properly, getting consistent sleep and being active boost the ‘good feeling’ hormones in your body that lead to a successful recovery.” In fact, addiction generally leads to the consumption of poor nutrition foods and can decrease your desire for physical activity. Physical activity can provide actual endorphins that can oftentimes feel just as good as a puff of an e-cig. On the other hand, taking your nutrition into your own hands can offer a boost in confidence and a feeling of control that can help you kick an addiction.