Little Butt Lethal: How Cigarettes Are A Huge Problem for Oceans 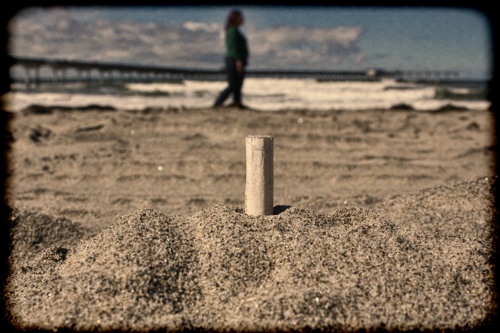 What do you think the most common form of litter is? How about water bottles? Or maybe even the caps found on plastic drink containers? Or possibly the dreaded plastic bag that everyone is so worried about banning?

If you guessed that cigarette butts are actually more common than any of these other suggestions, you’re spot on! It is estimated that roughly 4.5 trillion cigarettes around the world end up as litter every single year. And the Ocean Conservancy says their most commonly recovered item in their annual International Coastal Cleanup event is the cigarette butt. Yuck!

This problem is more than just an eyesore, though. In fact, it’s a very costly eyesore! Of the 11 billion dollars the United States spends annually on litter cleanup, 32 percent goes to removing cigarettes from the environment. That’s a lot of money for a little piece of litter.

But what about the impact this waste has on the environment? Surely something that many health officials are touting as a toxic and deadly personal habit must be causing harm to wildlife as well? Sadly, many of the trillions of cigarettes tossed out each year end up in our waterways and are leaving a very destructive legacy for both marine life and fresh water creatures.

What’s In A Butt?

Physically speaking, cigarettes are composed of more than cotton and tobacco nestled inside a paper wrapper. This is a common misconception and, if it were the case, perhaps a cigarette butt could more easily degrade naturally in nature.

But it is the physical composition of the cigarette that makes half the trouble for the environment. The filter in most cigarettes designed to protect smokers from harmful chemicals is actually a type of plastic called cellulose acetate. If you’re concerned about keeping plastic waste out of the environment and especially aquatic ecosystems, there’s one strike against the cigarette butt.

The chemical composition of a cigarette is the other half of the problem for the planet. There are hundreds of additives approved for cigarette manufacturers ranging from beeswax and molasses extract to ammonia and acetic acid. Estimates on the number of chemicals released from a lit cigarette vary anywhere from 4,000 to 7,000 and include things like carbon monoxide, formaldehyde, arsenic and lead.

Much noise is made about the health risks that a cigarette poses to the smoker, but we should also be discussing all of the health risks cigarettes pose to the environment. And now that you know what exactly makes up a cigarette, it should be easy to take a guess at how the composition is a threat to life in the ocean as well as rivers and streams.

The plastic filter presents some of the same issues that other forms of plastic present to the environment. You may have heard of aquatic animals like sea turtles and whales that have consumed plastic material such as shopping bags and water bottles. Cigarette butts also present a problem for animals that may mistake them for food and end up consuming the toxic plastic in response. And the Pacific Garbage Patch which is largely composed of plastic is partially made up of cigarette butts. 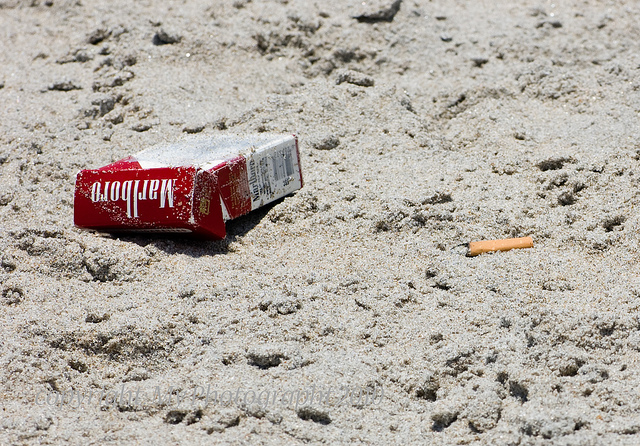 Again, the plastic in the cigarette is only part of the problem that this litter poses to nature. The collection of toxic chemicals in each cigarette is the other part of the equation, and it sure is a nasty one! In one study conducted by a researcher at San Diego State University, even small concentrations of the toxins from cigarettes were enough to kill half the fish in the experiment. Another study found that cigarettes act as a direct source of heavy metals when exposed to water, and thus have the potential to leach dangerous amounts of metal into aquatic ecosystems.

Given the highly destructive composition of cigarettes in both their plastic content as well as their myriad of toxins, eliminating cigarette litter from the environment should be of utmost importance for environmentalists.

Help the Planet Quit This Problem

The issue of cigarette butt litter may be difficult to tackle, especially if you aren’t a smoker yourself. You aren’t the one producing any of this litter, right? Fortunately, non-smokers and smokers alike can unite in their quest to save the environment from this nasty form of pollution. Here are a couple of ways you can start addressing cigarette pollution, whether or not you’re a smoker:

Addressing the most common form of litter worldwide is not going to be an easy task. But agreeing that this is a issue we need to solve and setting out to actually do something about it is what will save our waterways from this nasty problem.