The Jig is Up For The Oil and Gas Industry 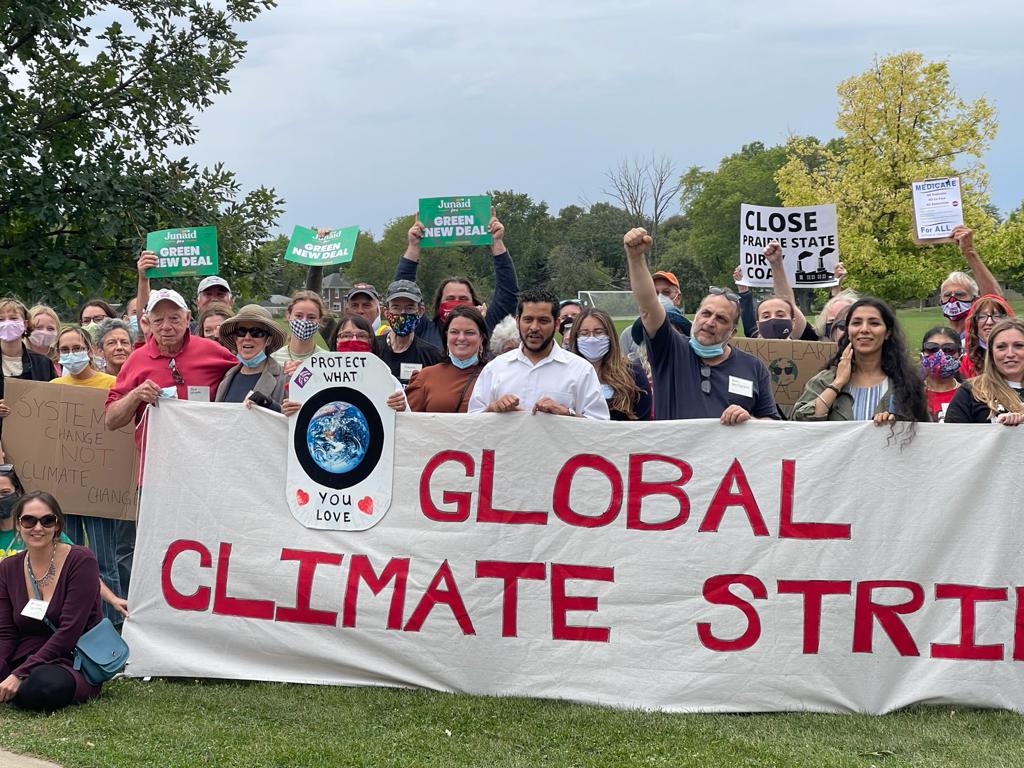 I’m running for Congress in Illinois’ 8th Congressional District because I believe that in the wealthiest democracy on Earth, people should come first, not profits. It pains me to see oil companies reaping big benefits thanks to the Ukrainian and Russian conflict – while Ukrainians fight for their lives. We need to build an energy system that is not subject to volatile market changes and is safe for the Earth’s ecosystem. Jimmy Carter had the right idea in 1979 when he had solar panels installed on top of the White House. Imagine how different our country would be now if our elected officials continued to invest in green energy.

Because we haven’t taken the necessary steps to curb our usage of fossil fuels, we’re now facing a global crisis that will impact every living creature. If we don’t make changes soon, the impact of climate change will result in increased flooding, famine, and extreme weather.

You don’t have to look very far to see just how powerful oil’s influence is on our lives. Despite the falling price of a barrel of oil, gas prices have remained high. The oil industry often blames the government or supply chain issues as reasoning for price gouging. But recent reports have shown oil companies are raking in record-breaking profits. Instead of lowering prices and receding some of their profits, they’ve decided to make their shareholders richer by doing stock buybacks.

Using volatile market changes as a veil for greed, the uncertainty of gas prices is making it difficult for everyday Americans to keep up. New legislation is being introduced to help Americans pay for the increased costs of gas. Those who rely on their vehicles to get them to and from work are most at risk, so I commend the move to help ease the financial burden for everyday people, but we shouldn’t need this kind of legislation, to begin with. Oil companies don’t have the right to make record-breaking profits at the expense of taxpayers. Putting profits above people is just downright wrong. They’ve been doing this for decades, and not just at the expense of our wallets but of our planet.

It’s a fact – the oil industry has known about climate change since the 1980s. (Some reports say even as far back as the 1970s.) They launched a multimillion-dollar campaign to sow doubt about the science behind climate change, leaning into the theory that there was no conclusive evidence to suggest human activity was to blame.

We now know that without a doubt, it is. Just take a look across the U.S. to see the impact of climate change. In my home state, Illinois, and across the midwest, devastating floods and droughts have made farming more difficult. On the west coast, the region is experiencing its worst megadrought in 1,200 years, contributing to an increased number of devastating wildfires and water shortages. And a recent prediction by scientists at Colorado State University says 2022 will be another above-average hurricane season for people living on the east coast.

Instead of heeding the call of thousands of scientists across the globe to start reducing our usage of fossil fuels, the oil industry has doubled down on its profit agenda and has been pumping millions of dollars into politicians’ pockets for years to prevent any real action from being taken. It’s no secret – the biggest beneficiaries of these campaign contributions are Republicans. Perhaps that’s why many Republicans tend to vote ‘nay’ on green economy legislation. Funding these politicians’ campaigns also helps the industry continue to receive billions in subsidies each year. In 2020 alone, it’s estimated the fossil fuel industry got $20 billion in subsidies. Instead of nudging the industry to make the necessary changes to save our planet and the people, the government has been rewarding them with American taxpayer money. Production subsidies have increased by 28 percent from 2017 to 2019.

First things first, we need to eliminate our dependence on fossil fuels. Each state has an abundance of natural green energy resources, and we should be investing in creating a clean energy system based on that. Take Chicago, my local area, for example. We can harness what’s called a lake breeze from Lake Michigan and turn that energy into electricity. Let’s ramp up vocational training for wind energy production and install wind turbines across the area. Let’s create jobs and help curb climate change. In South Dakota, the state is harnessing hydroelectric power, and it now accounts for nearly 50 percent of electricity production. Let’s make this happen across the country!

If we produce our energy right here in the United States, we won’t be beholden to volatile market changes. What happens abroad will have less of an impact on energy prices. We not only curb costs but create millions of good-paying jobs. According to the International Labor Organization, switching the world to a green economy could create 24 million jobs by 2030 if the right policies are in place.

Don’t Lose Hope – It Starts with Your Vote

Those who will be the most impacted by climate change are our most vulnerable –  low-income people. If you care about creating a world where the Earth and its people are protected and prioritized above profits, I hope you’ll register to vote and make your voice heard this midterm election. We can change the trajectory of climate change, and it all starts with voting for politicians who will hold powerful industries and corporations accountable.