After Nine Years in a Roadside Zoo, Two Tigers Finally Enjoy Life Without a Cage Overhead

By Michael Sharp, Humane Society of the United States 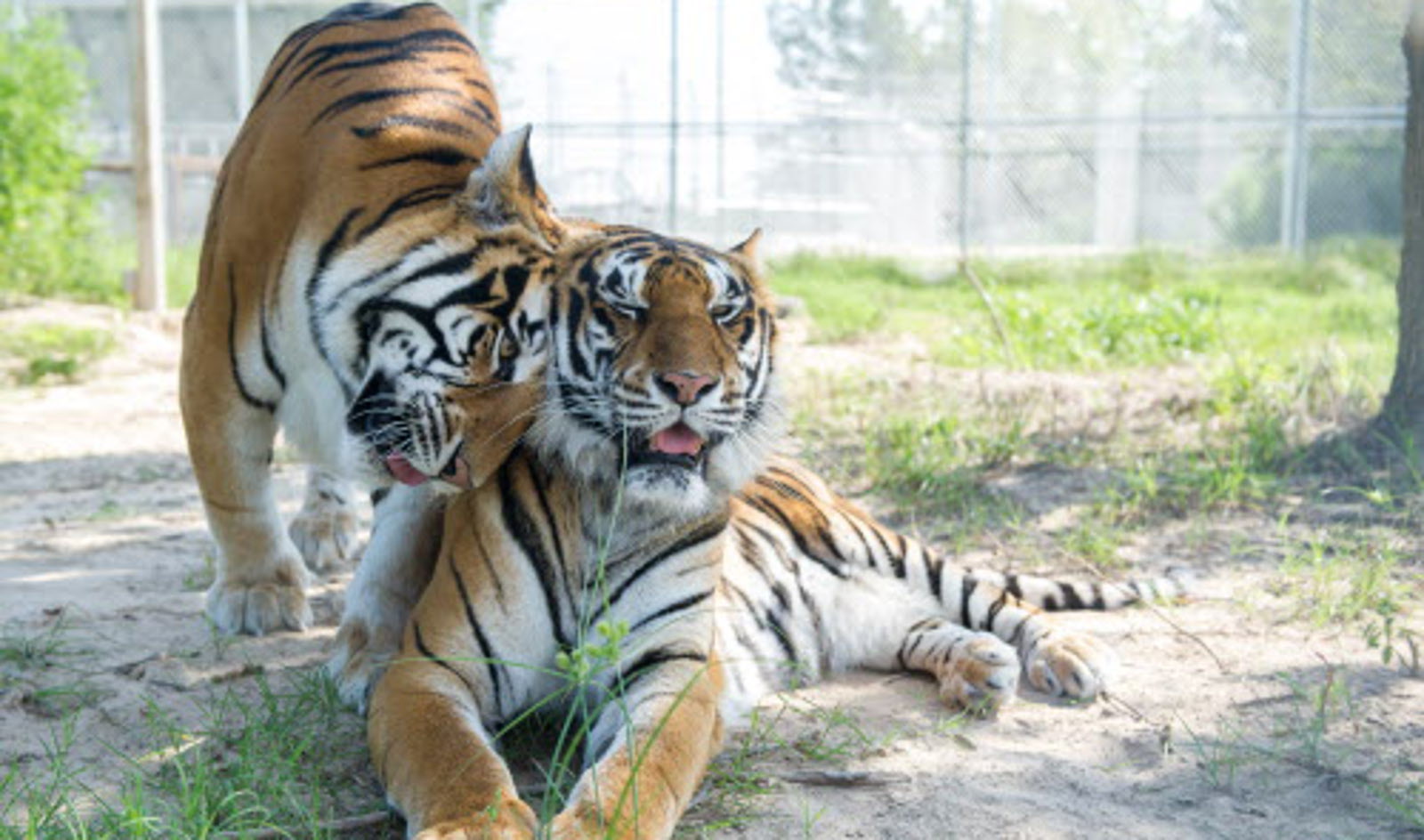 After a nearly 11-year-long journey, two rescued tigers, saved from a roadside zoo in Mississippi, finally settle into their newly built habitat at the Cleveland Amory Black Beauty Ranch. The two tigers, sisters Anastasia and Natalia, were among a group of animals that were freed from life in a decrepit zoo thanks to a month-long investigation by the Humane Society of the United States. The pair have lived on Cleveland Amory Black Beauty Ranch for nearly two-years and recently became the first tigers moved to the ranch’s brand new 5-acre tiger habitat. This is the first time they will live in a space where they can see the sky uninterrupted by metal wires.

“Their minds were completely blown,” says Katherine Birk, lead wildlife caregiver at the Cleveland Amory Black Beauty Ranch. “They had never had a moment where they didn’t have a cage over their head.”

When the transfer gates slid open, welcoming the Anastasia and Natalia to their new home, the two tigers walked out into a covered walkway. Waiting on the other side was the largest expanse of land they’d ever set paw into: 12,000 square feet. The sisters sniffed at the trees, at the stumps, at the plants. They found a lush patch of grass and rolled on their backs. They crawled up onto the elevated wooden platforms.

This is a momentous occasion for Anastasia and Natalia considering the conditions they lived in before coming to the ranch, it was a moment five years in the making.

Follow Their Journey From Roadside Zoo to 5-Acres of Freedom 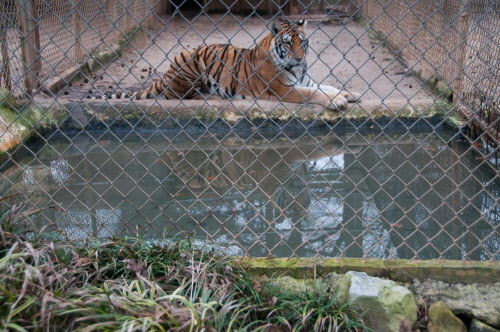 In the fall of 2009, an undercover HSUS investigator spent 28 days at a roadside zoo in Mississippi, documenting inadequate care for the animals and safety concerns for the public. A macaque, left alone in a barren cage, was showing signs of self-mutilation. A black wolf, clearly sick, received no veterinary attention and died days later. Some of the cougars were emaciated, the points of their hip bones showing against their skin. Pictured above, Natalia lies near the remnants of a pool, in the cage where she’d likely spent most of her first nine years. The rescue operation was months in the making and required the utmost care and caution from HSUS rescuers and the Mississippi Department of Wildlife.

“[Life in the zoo] was just a very barren sort of existence,” remembers Adam Parascandola, HSUS director of cruelty response. “No grass … No logs or anything to claw on. Nothing like that.” The cages that confined Natalia (right) and her sister Anastasia were made from inadequate chain link fencing, with low ceilings. Anastasia was beginning to suffer from renal failure; her unbalanced diet comprised almost exclusively chickens. 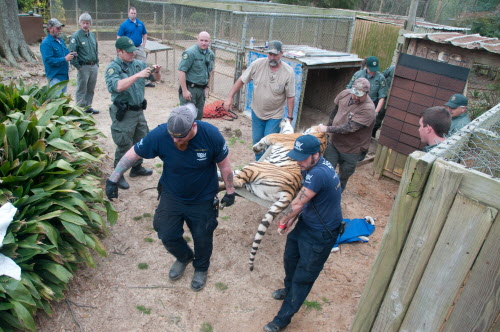 Natalia (shown above), her sister and another tiger — Gustavo — were literally carried to a fresh start in January 2012. The HSUS had submitted legal complaints to the state of Mississippi, leading eventually to this iconic moment. “It was a long road to get there,” says Parascandola, who joined an expert group of veterinarians, handlers, HSUS responders, and state fish and wildlife agents in removing 11 animals, including two cougars and the macaque. 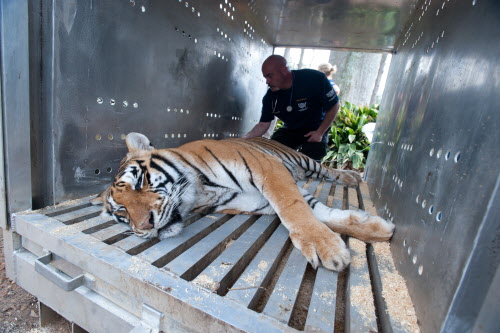 Officials with Mississippi’s Jackson Zoo delivered the sedation via dart guns, allowing responders to carry the animals to transport cages and veterinarians to perform initial evaluations. “It’s a very precise and tricky operation to get everything timed just right,” says Parascandola. The goal: Have the animals emerge from sedation in time to be able to stand up in their cages before the transport began. At one point, a sedated tiger prematurely lifted her head and gave a bit of a roar. “That,” says Parascandola, “definitely gets your adrenaline going.” 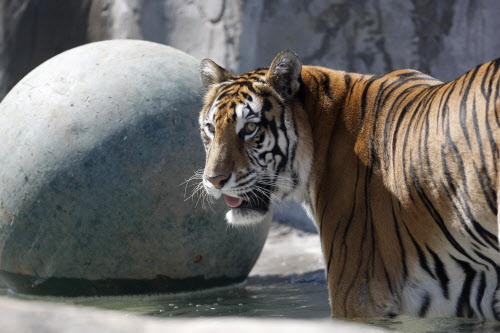 Anastasia, Natalia and Gustavo, were taken to Black Beauty Ranch, operated by HSUS affiliate The Fund for Animals in Murchison, Texas. Gustavo had never had a den before; he stayed in his new one for days. “They were just basically scared,” Birk says. “But it only took them a few days to kind of warm up to us.” Caregivers helped their personalities emerge by providing daily enrichment: cardboard boxes scented with colognes, pine branches, nontoxic children’s paint to smear across a canvas with their face and paws — and for Gustavo, an oversized Boomer ball. “He would not stop playing with the ball,” Birk says. “It was like that’s what he’d wanted his entire life.” 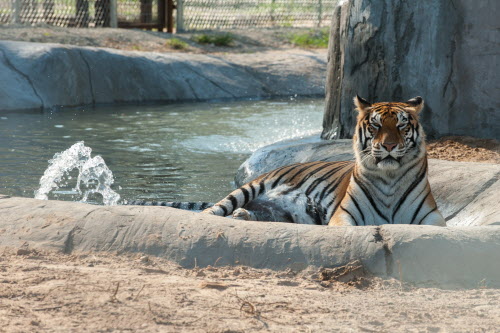 This past August, Anastasia and Natalia became the first of Black Beauty Ranch’s four tigers to enter the new 5-acre habitat. The land is divided into three yards: one featuring a waterfall, another with a shallow lagoon (which Natalia is enjoying above) that feeds into a 5-foot-deep pool. The biggest yard, at 3 acres, also has a large natural pond and wooded areas. “All of them have been taking to the water in varying capacities,” says Birk, noting that Alex — rescued from an abandoned menagerie in Kansas — is fully swimming at this point, “whereas the girls … just like to take a dip and hang out in the lagoon.” For the first time in their lives, the tigers can also run full-speed, up to 35 miles per hour. 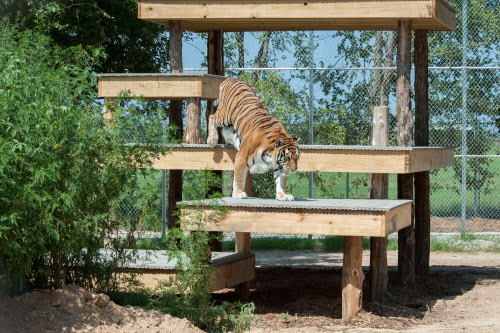 The 14-foot-high set of platforms offers the tigers a view of the enclosures around them — and more importantly, a chance to build and tone their muscles. Already, caregivers have seen results with Anastasia, who’s still battling the effects of that poor diet in her past life. “With just [the chance] to climb and walk long distances, she’s really toned out her hind end,” Birks says. Here, Natalia climbs down. No one’s ventured to the top yet, but caregivers are trying to coax them there — placing scented enrichment items and their Boomer balls up higher and higher. 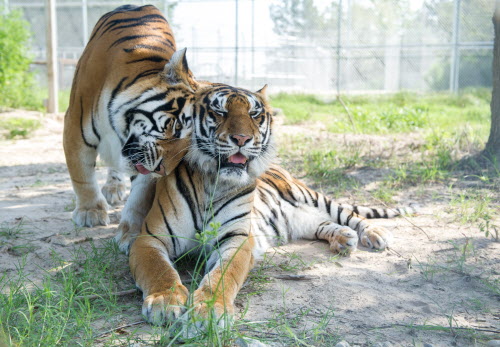 The sisters, now 11, can at times be fiercely independent and at other times incredibly bonded. Some afternoons, one will take a dip in the pond while the other lies in the shade. “They do what they want to do,” Birk says, “but when they come back together, that’s when they do the head butt greeting.” It shows affection, as does their low “chuffing” — a tiger’s take on purring. At nights, in their indoor “bedroom,” the two will sleep close to one another. 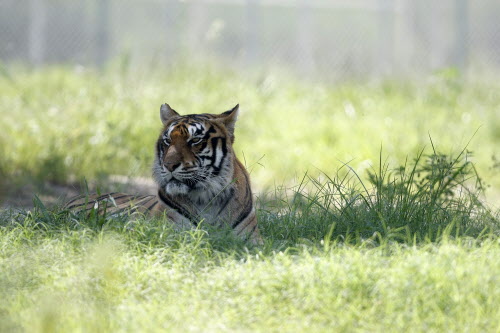 Here, Anastasia enjoys a slice of shade. More than two years after helping carry the tigers out on stretchers, Parascandola logged online recently to watch a video of the animals entering their new habitat and catch a glimpse of powerfully simple moments similar to this one. “I’m obsessed with them and how well they’re doing,” he says. “It’s just really amazing and moving to see. As far as we know, for the first time in their life, they’re actually in a more natural environment. And it’s really stunning to see.”

All image source: The Humane Society of the United States