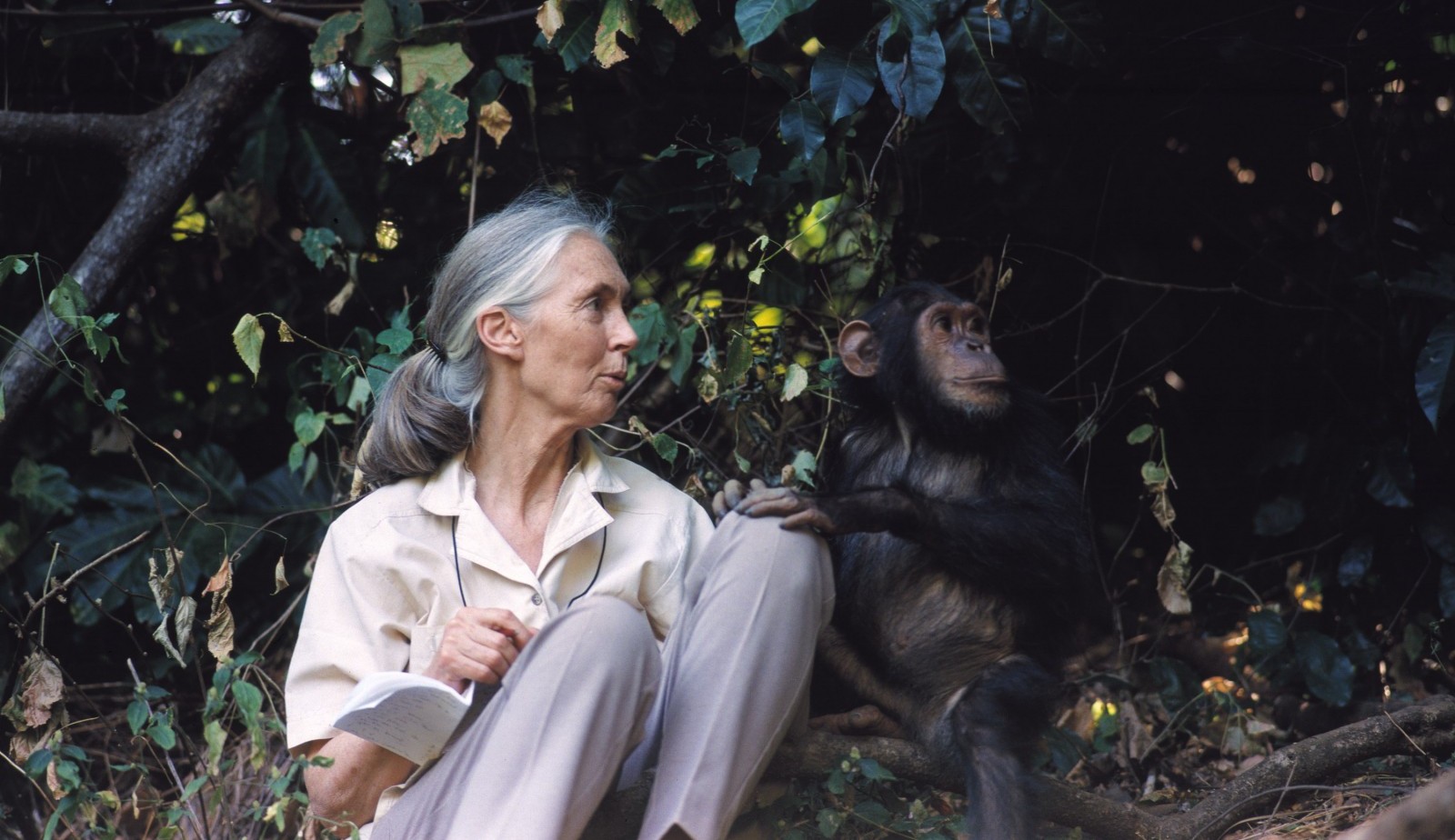 The world’s leading primatologist and one of the most renowned conservationists, Jane Goodall, has spent the last 50 years advancing our knowledge of chimpanzee behavior. In her early 20s, Jane traveled to the shores of Tanzania to study a group of wild chimpanzees with the hope that observing them in the wild would strengthen our understanding of evolution and of the species.

A lone researcher, Jane was a pioneer in her field. While today many zoological institutions insist that keeping animals in captivity furthers our knowledge of them, she understood from a young age how important it was that animals capable of such complex cognition remain in their natural habitat. What began as a love for animals at a young age turned into something so much more; the discoveries made by Jane during her time studying chimps in their natural habitat are unparalleled and continue to shape the scientific communities understanding of great apes.

Now 80, Jane spends less time in the field today than she did years ago, but her voice advocating for the animals has never been louder. As the founder of the Jane Goodall Institute and the Roots and Shoots Program, she continues to seek to improve our understanding and treatment of great apes. A scientist and activist, Jane by all accounts wrote the book on chimpanzee behavior. However, her knowledge and compassion concerning all animals has earned her global notoriety and respect from scientists, activists and researchers.

An author and UN Messenger of Peace, Jane spends much of her time traveling and attending lectures that intend to raise awareness regarding animal welfare in captivity and the dangers animals face in the wild. Jane has always voiced her opinion, often condemning facilities for the treatment of their animals. Here are a few:

In 2013, Goodall launched a public appeal, calling individuals to submit comments to the National Institutes of Health (NIH) in an effort to end the institution’s use of chimpanzees for medical research. Over 3,000 members of the Jane Goodall Institute answered the call and tens of thousands of others associated with different organizations joined as well. Ultimately, these amazing efforts lead to the official announcement that NIH would retire all but 50 of the chimps in their care to a federally owned sanctuary and begin to develop research approaches that do not use chimps.

2. An Open Letter to Vancouver Aquarium

In 2014, Jane penned a letter to the Vancouver Aquarium board regarding their beluga breeding program plans. She stated that cetacean breeding is “no longer defensible by science” and that the phasing out of cetacean programs is a natural progression as we evolve our understanding of animals. She even went on to suggest that the aquarium had been misleading their visitors by claiming some cetaceans “do better in captivity” then in the wild; a claim that has been consistently refuted by biologists all over the world.

Jane has long advocated for stricter legislation regarding the private ownership of exotic pets. She firmly believes that wild animals including primates, lions and tigers do not do well in captive settings. She also accredits the private ownership of wild animals for the disconnect that makes it difficult for the public to fully understand how endangered the animals are in the wild.

In May, the New York Blood Center (NYBC) made headlines when they effectively abandoned 66 chimpanzees in remote Liberia. After using the chimps as test subjects for 30 years, the NYBC decided their time and funds could be better suited elsewhere.

The NYBC stated that they have no obligation to care for the chimpanzees, despite official documents from 2005 stating otherwise. Jane Goodall penned an open letter to the NYBC urging them to take responsibility for the animals they rendered dependent on human care by breeding them and caring for them for the past 30 years.

A petition is available for the public to sign requesting the NYBC acknowledge their moral obligation to continue caring for these chimps.

After the death of Cecil the lion, Jane Goodall issued a statement on her website calling the hunt despicable. Jane went on to confront trophy hunters who claim the money they pay to hunt the animals goes towards helping impoverished countries, stating that rarely does it ever happen.

“I have no words to express my repugnance. He was not even killed outright but suffered for hours before finally being shot with a bullet. And his magnificent head severed from his wounded body. And this behavior is described as a “sport.” Only one good thing comes out of this – thousands of people have read the story and have also been shocked. Their eyes opened to the dark side of human nature.”

Jane is currently urging UPS to follow in the steps of other companies that have ceased all shipments containing the body parts of wild animals since the death of Cecil.

In 2013, Goodall launched a public appeal, calling individuals to submit comments to the National Institutes of Health (NIH) in an effort to end the insitution’s use of chimpanzees for medical research. Over 3,000 members of the Jane Goodall Institute answered the call and tens of thousands of others associated with different organizations joined as well. Ultimately, these amazing efforts lead to the official announcement that NIH would retire all but 50 of the chimps in their care to a federally owned sanctuary and begin to develop research approaches that do not use chimps.