After 30 years of research on chimpanzees in Liberia and previously committing to their lifetime care, the New York Blood Center (NYBC) has decided to withdraw all funds and abandon dozens of helpless animals who are entirely dependent on human care. The colony consists of 66 chimpanzees, spread out on six different islands, whom the Blood Center used for biomedical research.

The Chimps They’ve Left Behind

Bullet is one of the chimpanzees abandoned in Liberia by the Blood Center. There aren’t many known details about his life, but we do know that Bullet is a 38-year-old male who arrived at the lab when he was three. His arm was amputated following an injury he sustained when his mother was shot. He is an incredibly resilient chimpanzee and has risen to be the alpha male of his group. 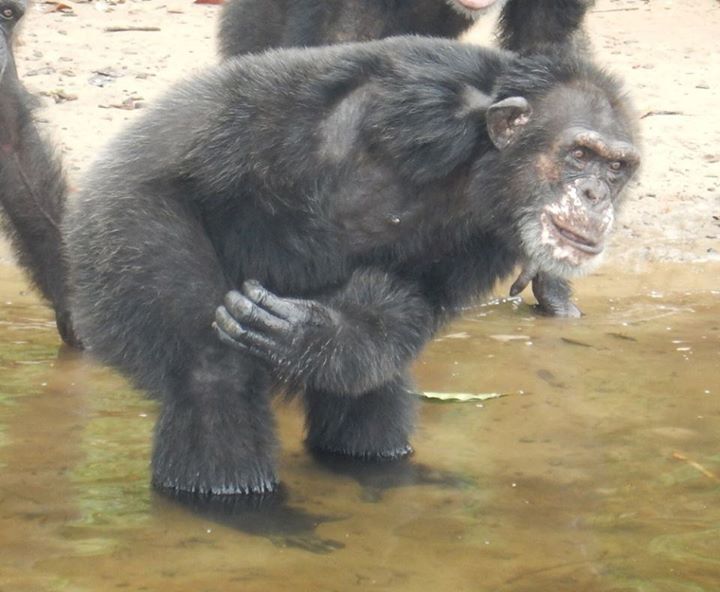 NYBC Do the Right Thing/Facebook

Bullet’s story is an example of what so many of these chimpanzees have been through, and why it is so important that NYBC lives up to its responsibility to provide for their lifetime care.

In the past, chimps like Bullet have been subjected to invasive medical procedures, including research involving the hepatitis B vaccine and blood cleansing, and have endured weeks without food or water due to civil war in the country. Many of the deserted chimps died from starvation or dehydration.

Sending Aid to Save the Chimps

The Humane Society of the United States has stepped up to the task of caring for the chimps, whom the Blood Center has tossed aside, and is providing emergency funding to keep them alive. Along with more than 30 other organizations, we are working to raise money to provide the animals with food and water and to make needed repairs to the infrastructure. In addition, volunteer caretakers in Liberia have answered the call to help the chimps. Many risked their lives to help save them during the country’s past conflicts.

The New York Blood Center has an ethical responsibility to provide true sanctuary for the animals it used for profit for so many years, yet it has left the chimpanzees to perish. With hundreds of millions of dollars in assets, the Center should reinstate its funding immediately for the animals they put through so much.

The number of chimpanzees left in the world is plummeting dramatically. Liberia is home to the second largest population of West African chimpanzees and is therefore potentially one of the most viable populations and a priority for conservation of the species. The abandonment of 66 chimpanzees to die of starvation would be the Center’s downfall.

NYBC was contributing $30,000 a month to the care of the chimpanzees — a small price for them to pay back to these animals. The animal protection community has stepped in to take this on.

While Bullet’s past cannot be changed, his future can! Please join the many others who have already contributed to helping us save the chimpanzees of Liberia. Sign the Change.org petition to urge NYBC to reinstate their funding and if you can, donate to make a difference for these chimpanzees.