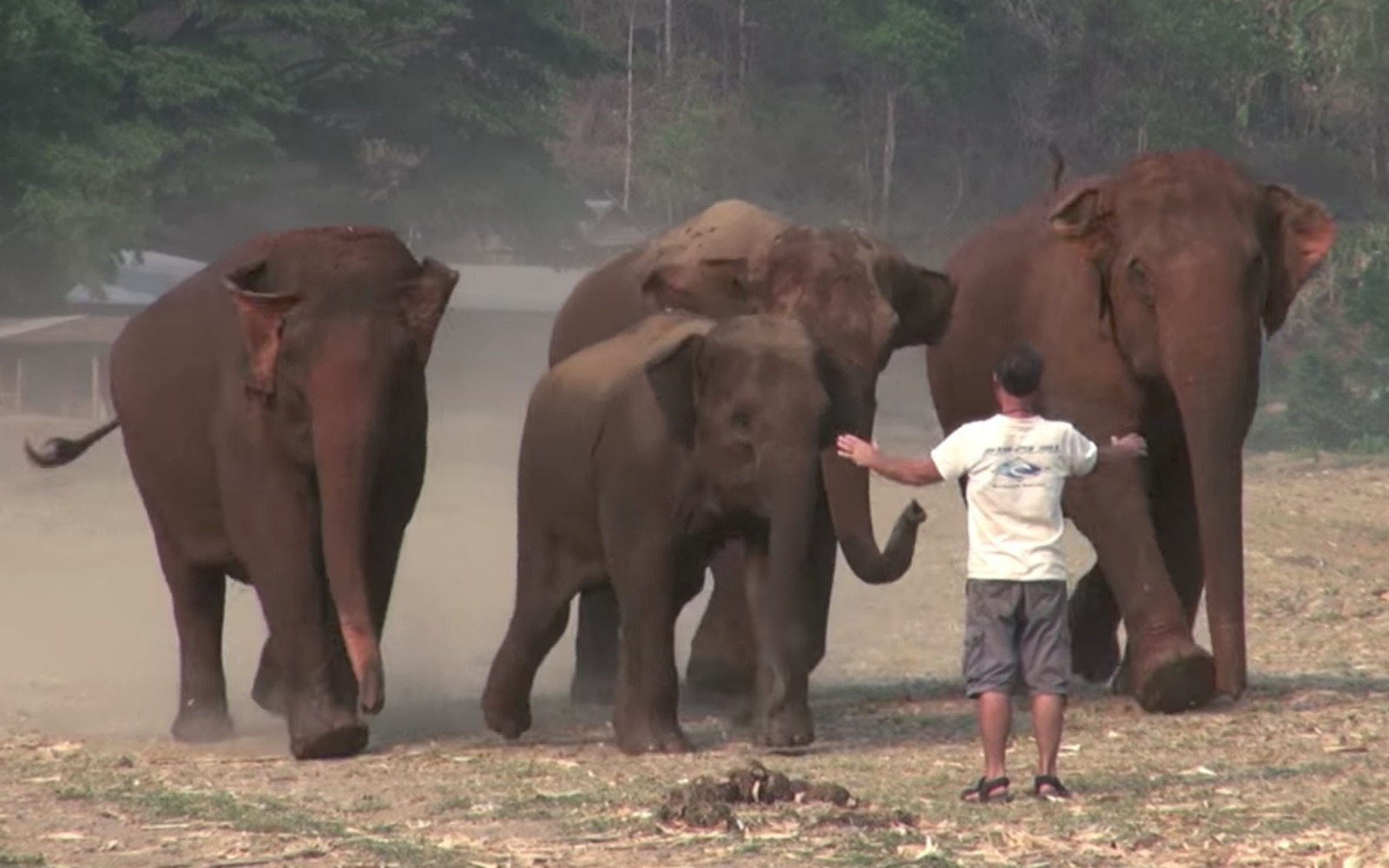 There is nothing more uplifting than an animal rescue story and, thankfully, there is no shortage of inspiring rescues. From a man saving a cow from drowning during Hurricane Harvey to the video of kind people helping a whale tangled up in a fishing net, there are dozens of rescue stories daily that remind us that there are compassionate people trying to make the world a kinder place for all.

But while we laugh and cry over these rescue stories, what happens months or even years after the rescues have taken place? Do the animals remember the people who rescued them? There is no denying animals’ intelligence and there are many reunion videos that not only show that animals recognize their rescuers, they will run to them. Here are just some of our favorite videos showing animals running to the people who rescued them!

Seven years ago, when Peanut and Cocoa were less than a week old, they were rescued from the veal industry. One of their rescuers, a volunteer, and now shelter manager, Alicia, would visit the pair often, and the friendship between Alicia and Peanut blossomed. Alicia visits Farm Sanctuary’s Northern California Shelter just a couple times a year, but Peanut always comes running when she calls – instantly recognizing her.

Cows are just like our cats and dogs. They crave affection and enjoy building bonds and relationships with others – no matter the species. Sadly, because cows and other farm animals are typically considered “food,” they are treated like commodities rather than individuals. Most never get to experience the incredible bonds of family or friendship. Thankfully for Peanut, he has a once-in-a-lifetime friendship with his rescuer, Alicia.

Every day, Camus the chicken waits for his rescuer, Peter, to get home to Lighthouse Farm Sanctuary in Scio, Oregon and he runs as fast as he can to meet him and give him a hug.

Camus’ affection isn’t surprising. While we might not think of chickens as being especially affectionate animals, this is far from the truth. Chickens are amazing mothers and take care of their babies long before they have hatched. It has been found that they “talk” and “purr” to the eggs during incubation. When the chicks hatch, hens are even more loving. They defend their babies from predators, show empathy for their chicks, and teach their young everything they need to know.

When Lillie sees her caregiver at The Gentle Barn, she can’t help but run full speed ahead. She even looks like she is flying with her big floppy ears!

Scientists have determined that not only are pigs smart, they are smarter than dogs, some primates, and three-year-old children. They are ranked as the fourth most intelligent creature on earth. Their level of cognitive ability allows pigs to play joystick-controlled video games, have abstract thoughts, use tools, recognize their own names, dream, and follow commands.

This rescued elephant, Kham-Lha, comes running when she hears her name being called and brings all of her friends along. Kham-Lha lives at the Elephant Nature Park, a large animal sanctuary located in Chai Mai, Northern Thailand that takes in elephants who have been the victims of Thailand’s many cruel elephant-fueled industries.

Think it’s odd an elephant knows her name like a dog? It’s really not so strange. Wild elephants have been observed mourning their dead friends and relatives, and even burying them in what appear to be funeral-like ceremonies. Elephants recognize when their friends are upset and offer comforting caresses and chirps of sympathy to help reassure them that everything will be okay.

Amelia was rescued in January of 2011, from the home of a woman who was notorious for hoarding and abusing animals. She now resides at Catskill Animal Sanctuary and will happily run when her caregivers call her name.

Pigs often get a bad reputation as being dirty, stupid animals but in reality, they are incredibly intelligent and emotional beings. Studies have shown that pigs possess the ability to empathize with one another, they can perform tricks just like dogs, and they even come running when they hear their names (just take Amelia, for instance!) If only everyone knew how wonderful pigs are and believed that they deserve to live.

Despite the vast knowledge on animals intelligence and emotional capabilities, most people find it hard to believe that farm animals and wildlife can be just as smart as the animals they welcome into their homes. This may be because they’ve never been told differently or perhaps it is because they use this as an excuse to justify their food and product choices. Either way, we can all stand to set aside our preconceived notions and see all animals as the individuals they really are.

Share this post and inspire others to see animals as the unique and deserving beings that they are!