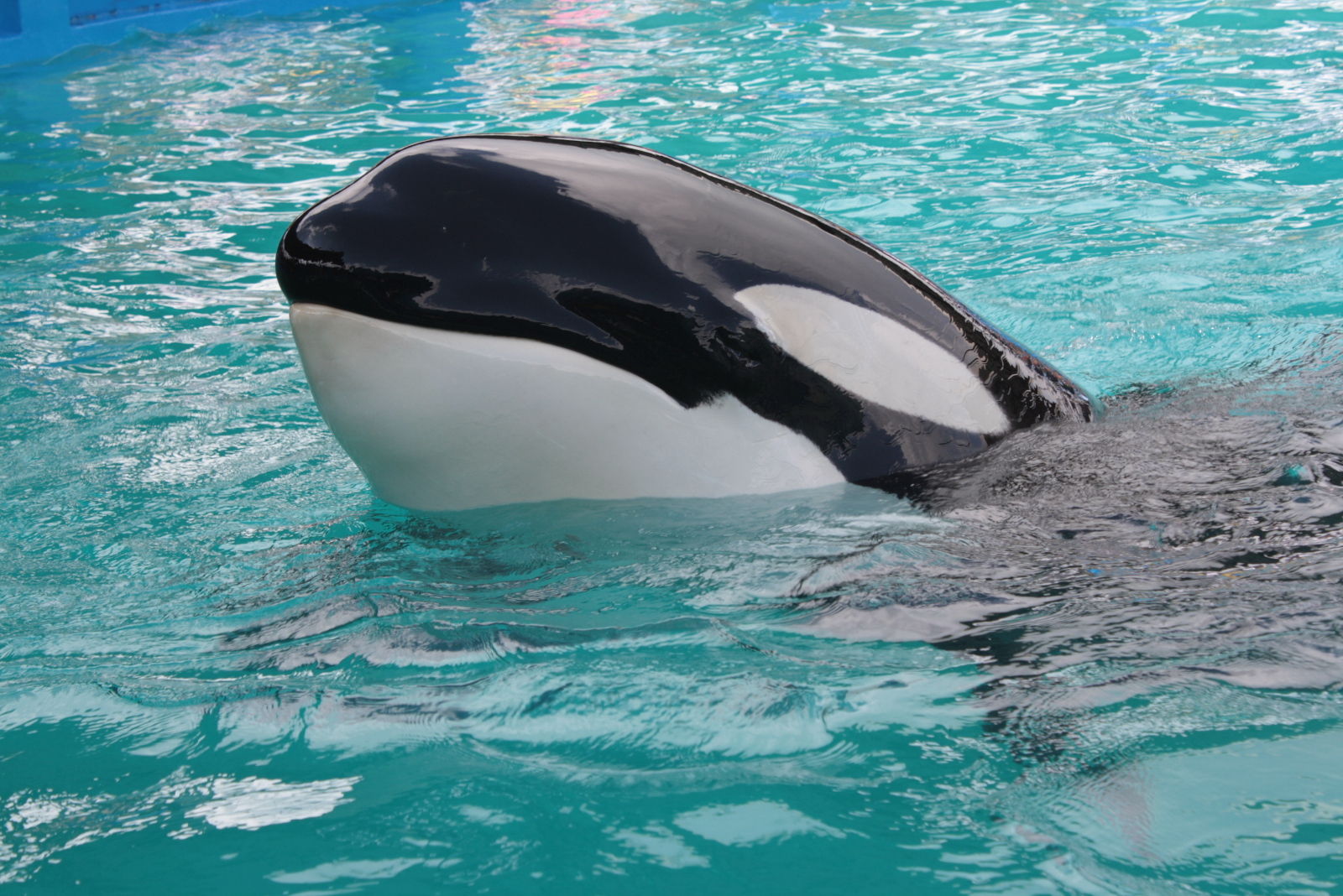 The captivity industry has been alive and strong for years now. However, it wasn’t until recently that the general public began learning about the issues surrounding captive marine mammals.

In the last decade, the work of Sea Shepherd, the Oceanic Preservation Society (makers of the Academy Award-winning documentary “The Cove”), and Ric O’Barry’s Dolphin Project has helped bring about mass awareness to the plight of wild dolphins off the coast of Japan, a number of who are rounded up for the captive trade while others are slaughtered.

When the documentary “Blackfish” came onto the scene in 2013, a worldwide movement to empty marine park tanks of orcas was ignited – a push that has never before been seen in such force and scale.

It was this documentary (along with David Kirby’s book, “Death at SeaWorld”) that inspired Associate Art Director for the Boston Magazine, Andy Long, and Harvard Medical school Ph.D scientist, Steve Doris, to come up with their online project, 52Orcas.

The project aims to raise awareness about killer whales and advocate for their welfare through a series of profiles that features graphic illustrations of the world’s captive orca population.

After Doris and Long watched “Blackfish” and set out to share their new favorite film with others through hosted viewing events, the idea for 52Orcas came about.

“We estimate that we showed Blackfish to over 50 people. At the end of one viewing, our friend Jess Sousa said to us with tears in her eyes, ‘Stephen, what are you doing about this?’” Doris tells OGP.

Long kicked off the project by working on graphics of SeaWorld’s prize breeding bull Tilikum’s offspring. However, once they began to read “anything and everything about these whales,” they came to realized that “each whale’s story was uniquely inspiring,” as Doris tells us.

Not long after, thanks to a suggestion of a friend, Doris and Long started their 52Orcas Tumblr site dedicated to featuring one captive orca for each week of 2014.

“One goal of our project is to give an identity and a voice to every whale living in captivity. We do this with customized infographics that show the whale drawn to scale with his/her individual markings, and in some cases, scars. We also provide a short biography to give a glimpse into the life this whale has lead and who they are today. The hope is to put orca captivity into perspective for people visiting our site, and educate them that these animals are not well suited to life in an aquarium,” Doris tells us.

Since the project began at the start of 2014, the number of captive orcas has sadly increased with 54 orcas now in captivity. Doris and Long have profiled 18 from this group thus far including both long-held captives and recent captures who still remained unnamed.

Currently, Doris and Long are working to design merchandise featuring the whales to raise more awareness about their plight. As their project matures, the pair would like to start their own nonprofit organization to raise funds for orca research.

“As we continue to grow we also hope to begin sponsoring local events and supporting charities, throwing any weight we have behind supporting the rights of all orcas, captive and wild, around the world,” Doris says.

Check out a sampling of 52Orcas’ killer whale profiles and accompanying text below, then be sure to keep up with the project via Tumblr to see (and share) a new profile each week. 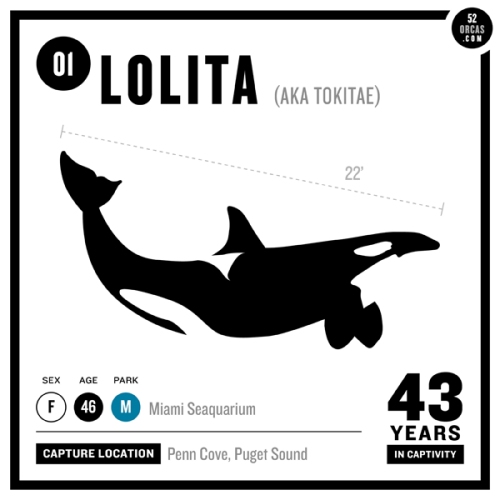 Since her capture at age two, Lolita has lived her life on display. Lolita’s tank is 20 feet deep, the smallest in the U.S., and thus deemed illegal by federal government standards. She has no offspring and lives in isolation, without other orcas. Lolita’s mother (L25) is still alive and her pod, in the northwestern waters of the Pacific, is currently listed as an endangered species. 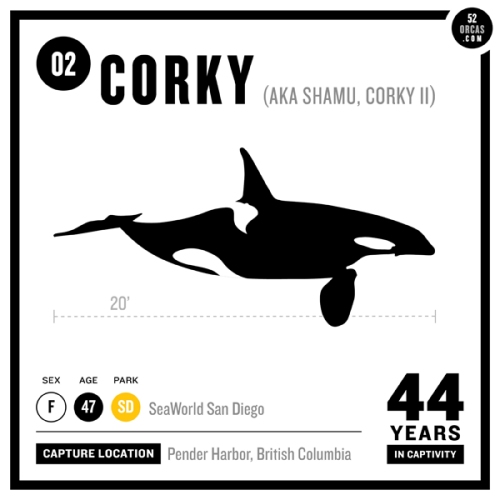 Of all the orcas currently living in captivity, Corky is the oldest. She’s also been there the longest, performing regularly under the stage name “Shamu.” Although Corky has been pregnant several times, most of her pregnancies have resulted in miscarriages, and none of her offspring are still alive. Regarded as an extremely gentle whale, Corky is favored for working with novice trainers. 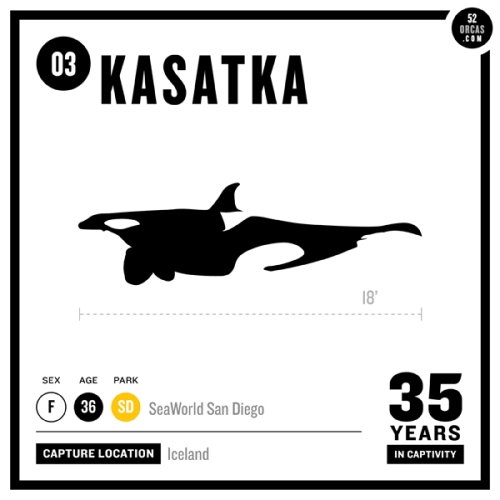 In her San Diego tank, Kasatka reigns supreme, showing dominance over her nine orca tank mates. Because she has extended this dominant behavior to her human trainers (including taking a trainer to the bottom of her tank against his will), trainers no longer enter the water with her. She is a mother of four and grandmother of three, and the ultimate matriarch of captive orcas. 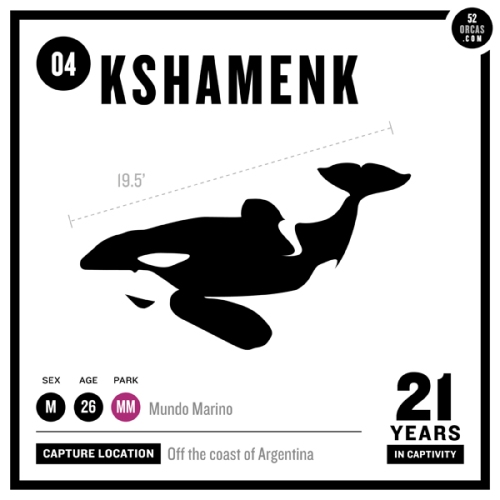 Kshamenk (pronounced “shah-menk”) is a transient killer whale, the only type that prefers a diet of other mammals. Captured at age five, it is likely that he possessed basic hunting skills. His older age of capture combined with his transient nature may explain why Kshamenk has not bonded with his human trainers. Since 2000, when his companion Belen died while pregnant with his calf, he has lived without other orcas. Kshamenk’s solitary lifestyle and small pool size have led to a petition for his release. 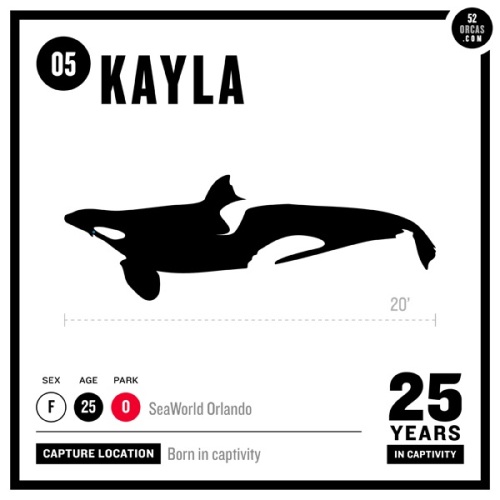 Kayla is the second oldest of all the orcas born in captivity. At age two, she was separated from her mother and shipped to different SeaWorld parks. Having never learned how to be a mother herself, Kayla violently rejected her first-born calf. Afterwards, she was moved to SeaWorld Orlando to be in the company of young orcas with their mothers. Kayla’s human trainers regard her as a master of all show behaviors, but to her spectators, Kayla is most known for her striking blue eyes. 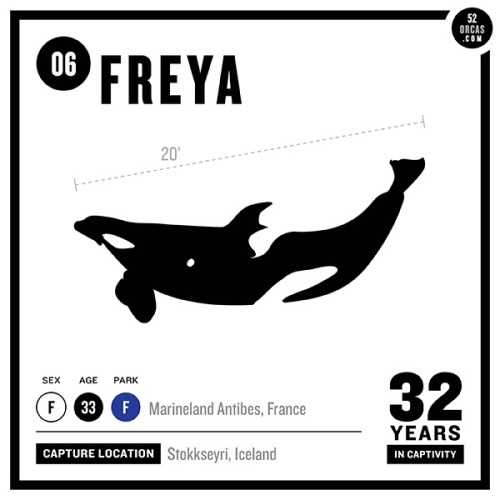 Freya is named after the Norse goddess of fertility and love. Despite her namesake, out of five pregnancies, just one calf survived: Valentin, with whom she is very close. She experienced moodiness following each stillborn, which may indicate depression. Freya has a unique appearance, with a dorsal fin that leans to the right, and a white scar on her side from a tumor that was removed. A YouTube video of her attacking a trainer during a 2008 performance has been viewed by over 6 million people. 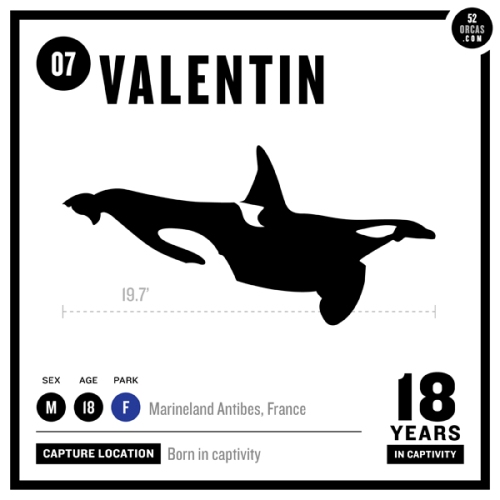 Much like orcas in the wild, Valentin has a strong bond with his mother Freya. Since his birth on the eve of Valentine’s Day in 1996, the pair is often seen interacting and performing together. Valentin stands out for being a gentle whale and for having a dorsal fin that is not fully collapsed, a rare quality in captive male orcas. Unfortunately, he is also known for having a pronounced skin condition located beneath his chin. 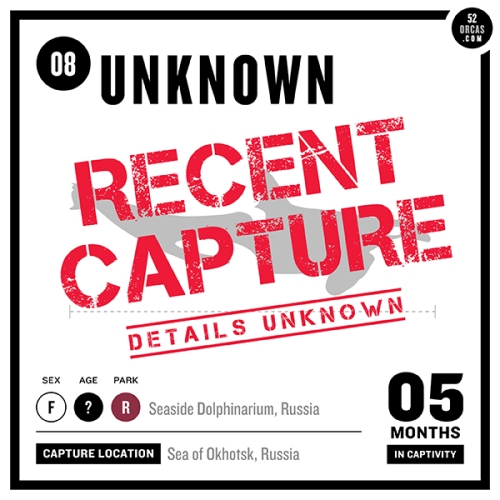 An adult female orca was recently captured off the coast of Russia along with a young male and a juvenile female. Netted, taken ashore, and trucked to a captive sea pen, these whales are now a part of the limited orca captures allowed annually in Russia. It is suspected that she is the mother of the two young orcas. If true, the group was recently separated when her young were sold and transported to an aquarium in China.