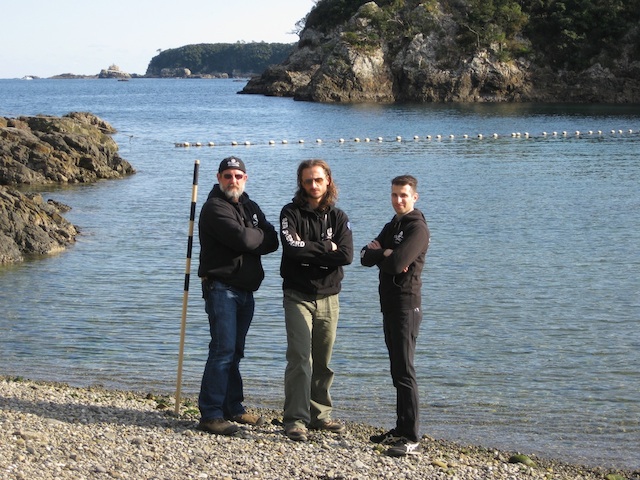 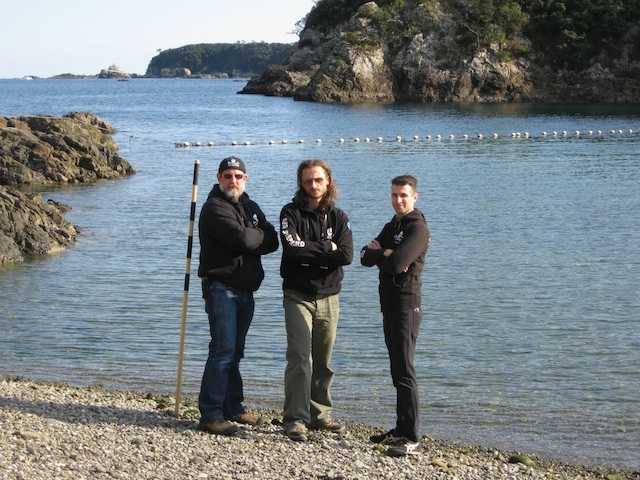 As described in their mission statement, Sea Shepherd Conservation Society (SSCS) is an international non-profit, marine wildlife conservation organization aiming to end the destruction of habitat and slaughter of wildlife in the world’s oceans in order to conserve and protect ecosystems and species through direct action.

Last year Ethan Wolf (pictured far right), an attorney in NYC, became a Cove Guardian for Sea Shepherd. I learned he was in Taiji, Japan through his tumblr  The Ocean on Fire and wanted to learn more about the work he was doing in Japan and what it means to be a Cove Guardian.

JH: What inspired you to visit Japan with Sea Shepherd?

EW: In 2003, Sea Shepherd Conservation Society exposed the killing of dolphins in Taiji. The graphic photos showed dolphins being forced into a rocky cove before being killed. The water literally turned blood red — that image was burned into my mind and I wanted to be a part of ending the barbaric process. The killing seasons in Taiji begins September 1 and runs until late March, during which time the dolphin hunters harass, kill, or capture nearly 2000 dolphins. Sea Shepherd’s campaign during the 2010-2011 season cut that kill number in half. I was unable to join the campaign last year, but made sure I could be a part of this year’s campaign, Operation Infinite Patience, so I could help push that number even lower.

JH: What was your role with Sea Shepherd?

EW: In New York City, I am the volunteer chapter coordinator. We mostly host fundraising and outreach events.

JH: Traveling as an American visiting another country fighting for the rights of animals can lead to some tricky cultural conflicts. Did you have any personal conflicts with this in Japan and if so how did you resolve this both personally and as an activist?

EW: There are twenty-eight men who harass dolphins, drive them into a cove, and either kill them or capture them. I went to Taiji to make life more difficult for those twenty-eight men and anyone else who participates or profits from the dolphin drive. I had no internal conflict with this task.

I do not hate the Japanese. I was prepared to see fish in fish markets and eat in restaurants that served fish or other animals. Taiji is a remote town several hours from any major cities so I was one of a few Westerners. Yet, most people in the neighboring towns were very polite and friendly toward me and my fellow Cove Guardians. I did not experience any hostility in Taiji town but I know that other Cove Guardians have.

JH: What impact did visiting Taiji have on your continued activism for animals?

EW: Now that I have been to Taiji, I am planning my next trip. I want to see this campaign to its end and then move onto another dolphin related campaign. As I am coordinator of the NYC chapter of Sea Shepherd, the focus of my activism is marine wildlife. I hope to do more outreach events and larger fundraising events in order to take a bigger role in making Sea Shepherd Conservation Society the most hard hitting and effective ocean conservation and marine wildlife organization.

JH: If you could encourage our readers to take any action for this issue, what would it be?

EW: Educate yourself and everyone you know. Do not go to dolphinariums or places like Sea World. Follow Sea Shepherd on twitter (@seashepherd) to find out what the dolphin hunters are doing each morning. Call the Japanese embassies and consulates (contact info below). Send emails to the Prime Minister of Japan and the Governor of Wakayama Prefecture (contact info below). If you are not able to go to Taiji, help sponsor someone’s trip. (Donate to support the campaign.) As each Cove Guardian pays for his or her own plane ticket, hotel room, and food, it is not cheap to become a Cove Guardian, but the money and time is well worth it. If you want to take a larger role in stopping the dolphin slaughter, email [email protected], fill out the application to become a Cove Guardian, and start making your plans to go to Taiji either for the rest of this killing season or next killing season.