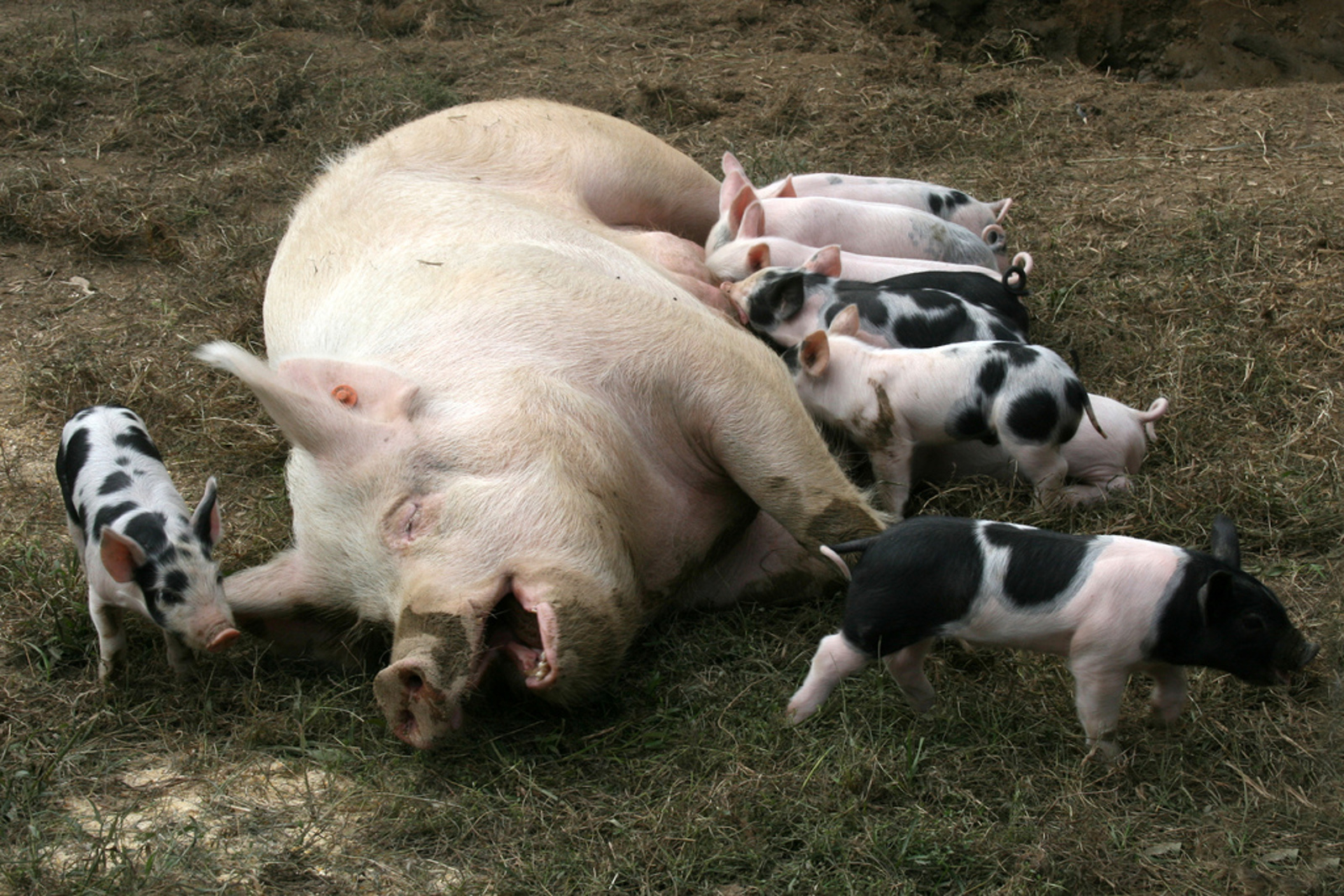 Pigs are well known for their intelligence, but they are also very family-oriented animals that want to care for and nurture their babies. Just like human mothers, pigs are loving and concerned parents who enjoy bonding with their young, a privilege they are denied as “food animals” on factory farms.

In the wild, sows live in groups with their piglets. These mothers are known to share caring responsibilities for their young, allowing others to forage for food. Although piglets are cared for by multiple pig-nannies, the bond between the mother sow and her piglets is unbreakable.

On factory farms, sows and piglets are unable to do any of these things. Sows are confined to gestation crates that are only two feet wide for the duration of their four-month pregnancy. When a sow gives birth, she is moved to a farrowing crate which is only slightly larger than the gestation crate. Her piglets are allowed to nurse, however, they are separated by the crate’s bars.

Piglets are then taken from their mothers as young as ten days old, a traumatic experience for both the mothers and piglets. After suffering through the loss of her children, the sow is subjected to another pregnancy and the cycle continues. This is truly a miserable existence for any living being.

Luckily, some pigs escape these terrible situations thanks to farm animal sanctuaries. These organizations save sows and their piglets from factory farms and give them a chance to enjoy life on their own right. At these amazing facilities, sows and their piglets are free to experience the bond of a mother and child. Looking at a few of these porcine moms and their babies, we can’t help but to notice that pigs aren’t so different from humans. 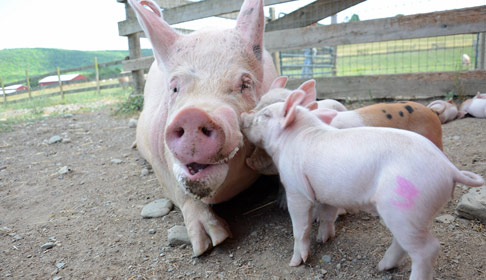 Before her rescue, Julia was subjected to terrible abuse, including kicking, beating and being dragged by the ears. Luckily for this sow, the police and SPCA prosecuted the farm responsible for her abuse and she was released from the farm. Local authorities contacted Farm Sanctuary and rescuers quickly came to take Julia to her new forever home. Due to the combination of the stress and abuse she had endured, Julia gave birth to 16 premature piglets only hours after arrival at the sanctuary.

The piglets required around-the-clock care to ensure their survival. Julia was also in bad shape; the poor sow had flat feet and leg sores as well as bruises and burns from her recent abuse. Despite her horrific past, Julia quickly learned to trust her rescuers and made great progress in her recovery. In time, the piglets also grew strong and healthy.

This happy family can now be seen wandering around Farm Sanctuary’s Watkin’s Glen shelter, making nests and snuggling with one another. Julia’s love for her piglets is undeniable, just check them out in this adorable video: 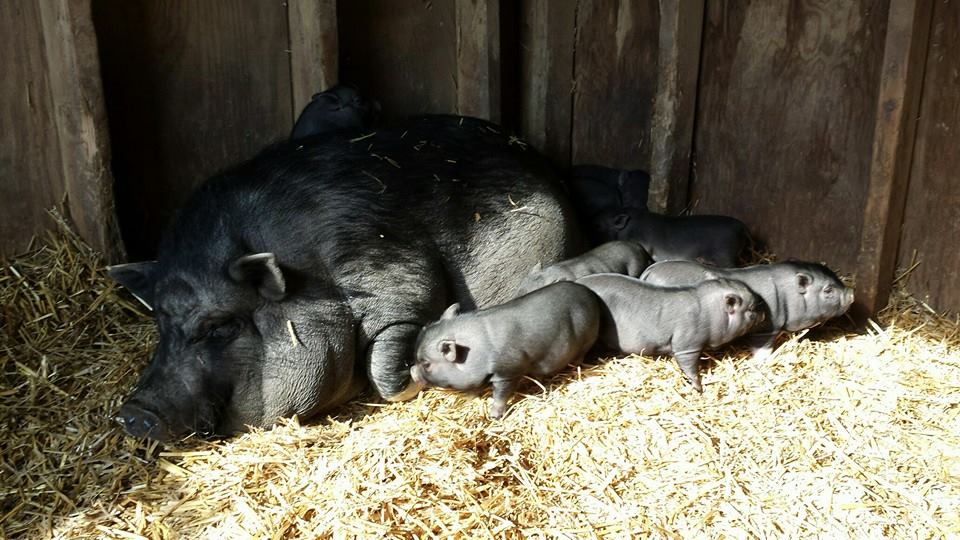 Cupcake was rescued by PIGS Animal Sanctuary in November 2013 along with a male pig named Elmer and two other female pigs. These pigs were originally seized by Animal Control in an animal cruelty case. The pigs had to stay with a foster family while the court case was completed, and Animal Control allowed Elmer, who was not castrated, to stay with the females. This led to a surprise when Cupcake turned out to be pregnant! She gave birth to her litter a month after arriving a PIGS Animal Sanctuary and is able to live out her life with her piglets in the comfort of the sanctuary.

3. Mumma Pig and Her Piglets 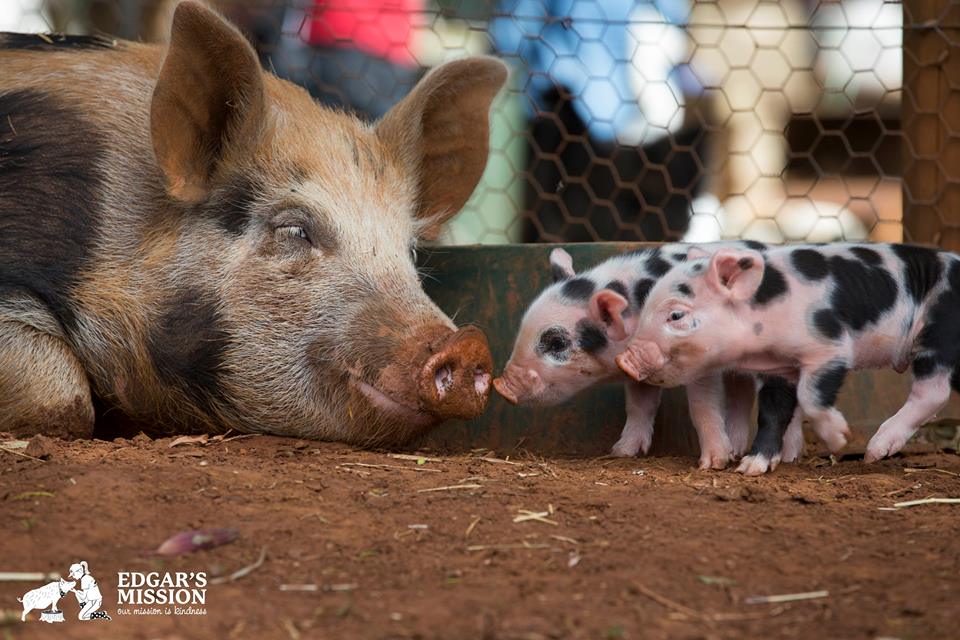 You would be hard-pressed to find an example of an amazing mother-child relationship that is more adorable than that of Mumma Pig and her piglets. This happy little family now resides at Edgar’s Mission Farm Animal Sanctuary, but their lives weren’t always so blissful.

Mumma pig was raised on a farm as a breeding sow, clearly a life she did not enjoy as she managed to escape in 2013. When someone finally managed to catch this brave sow, she was sent to live at Edgar’s. The facilities must have been to her liking because she gave birth to a litter of piglets shortly thereafter.

Edgar’s has nicknamed Mumma Pig “Wonder Woman,” for her ability to manage her piglets with amazing ease. This adorable family can be spotted nestled in straw beds or out rooting with one another; truly the joyous life that all pigs should be able to enjoy.