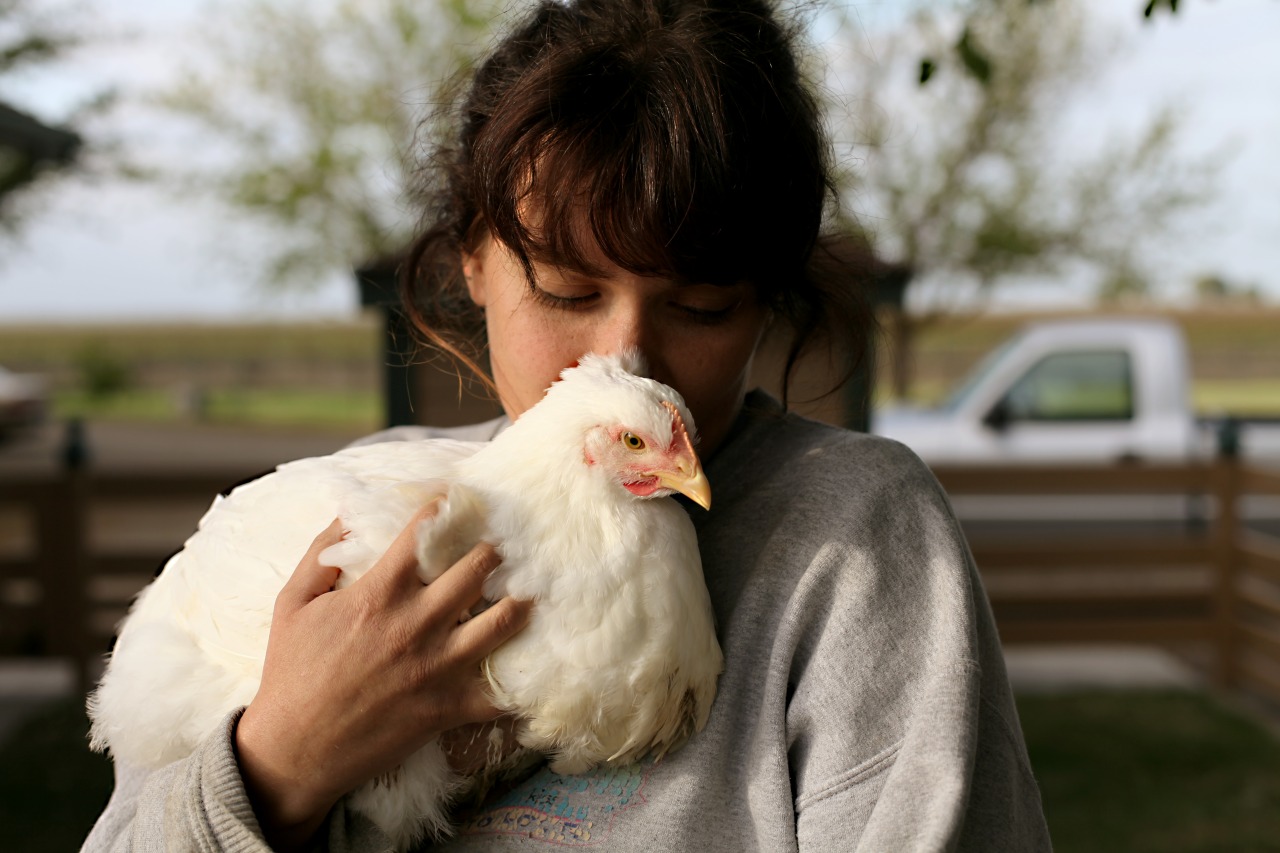 Who would guess that something as seemingly natural as chickens laying eggs would be causing these birds harm? Unfortunately, there is nothing “natural” about factory farming, the source of 99 percent of America’s animal products.

When we think of animals raised for food, many of us picture big red barns and rolling pastures – a lovely scene imprinted into our minds through our American culture’s commercialism. What we don’t see is that most animals are kept within the confinement of dark, tight enclosures and might never experience the light of day. A hen raised for eggs, for example, experiences her life in a cage on a metal platform smaller than the size of an iPad 2, squished with five to eleven other hens.

The cages these hens are kept in are known as battery cages and are used to pack hundreds of thousands of egg-laying chickens into a single building. Many hens experience respiratory complications due to the toxic ammonia built up from all their waste. The painful wire flooring is sloped, so that the eggs will roll out of the cages. Most of these chicken farms are operated through unreliable automatic feeding and water systems, causing thousands of birds to die of starvation every year.

Chickens today produce on average 250 eggs a year compared to 100 eggs a century ago. At this rate, chickens suffer from extreme calcium deficiency, causing their bones to break easily while in these cages. After about a year or two, hens are considered “spent” – unable to produce eggs. Sounds like a nightmare, doesn’t it? We certainly wish it wasn’t the truth.

On a happy note, there are victims who have escaped and are now experiencing lives they never thought they would have! Chickens are emotional, intelligent, and curious beings – they should not be commodities. Let’s celebrate these brave hens and help to liberate those still living within battery cages!

Sometimes, natural disasters aren’t disasters after all! Symphony, once referred to as a battery hen, became a loved and cherished individual when she was pulled out of a mangled battery cage when the farm’s warehouse was shredded by tornadoes. This beautiful girl is now a proud resident of Farm Sanctuary in Watkins Glen, New York, where she has grown very old with many close friends 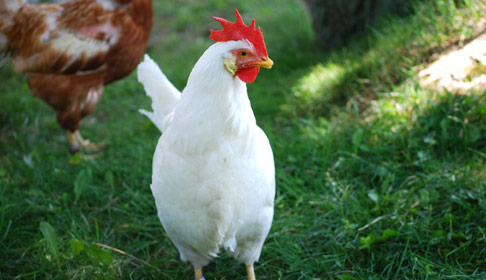 Hens contained in battery cages will often lose their feathers due to malnutrition and cramped conditions. Lucky for these hens, not only did they escape their brutal egg-laying lives, they were provided with sweaters by their compassionate rescuer, psychotherapist Sue Christy. 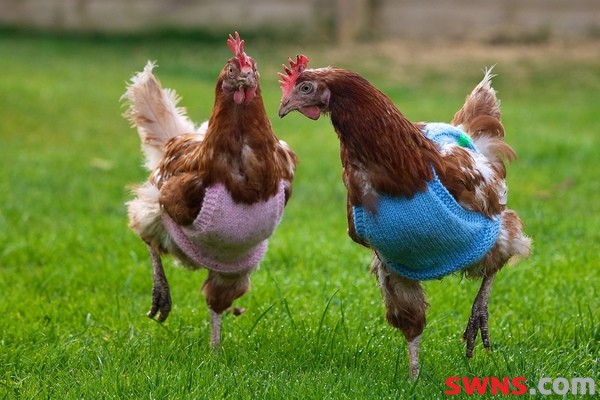 One of about 30,000 hens considered “spent” after a year of miserable life in a battery cage, Georgina was fortunate to be taken in by a kind family who has helped her and three other friends recover from their tragic past. 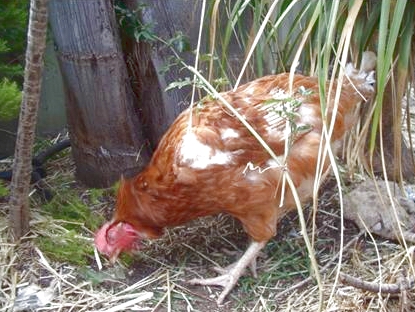 Once a battered battery hen, Little Miss Sunshine is now a superstar living out her life at Edgar’s Mission farm sanctuary in Willomavin, Victoria. Read her full story by clicking here! 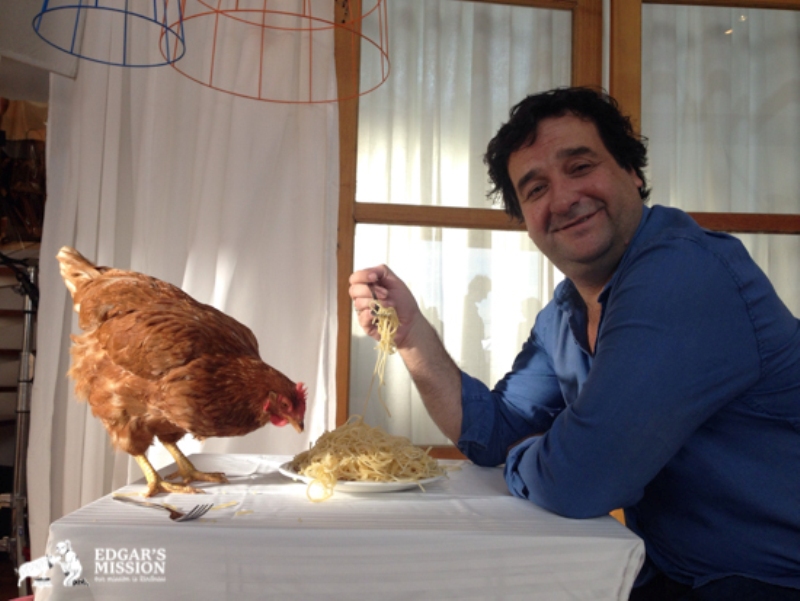 Who would have guessed a hen raised in a torturous battery cage and surviving on the brink of starvation could end up living happily ever after with her friend, a Pit Bull mix? Lucinda was brought to Chicago Animal Control before being rescued by compassionate Melissa Pena. 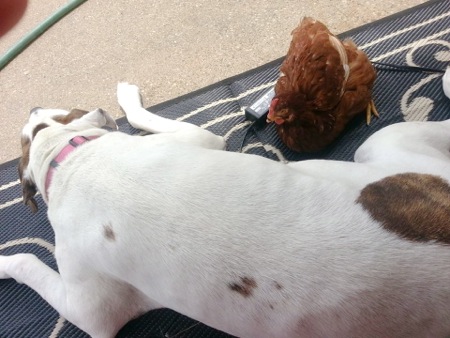 Erica was one of 300 hens who all safely found their way to Farm Sanctuary in Watkins Glen, NY after being rescued from an egg production facility in Pennsylvania. All these girls arrived in horrifying conditions, but are now living in peace. 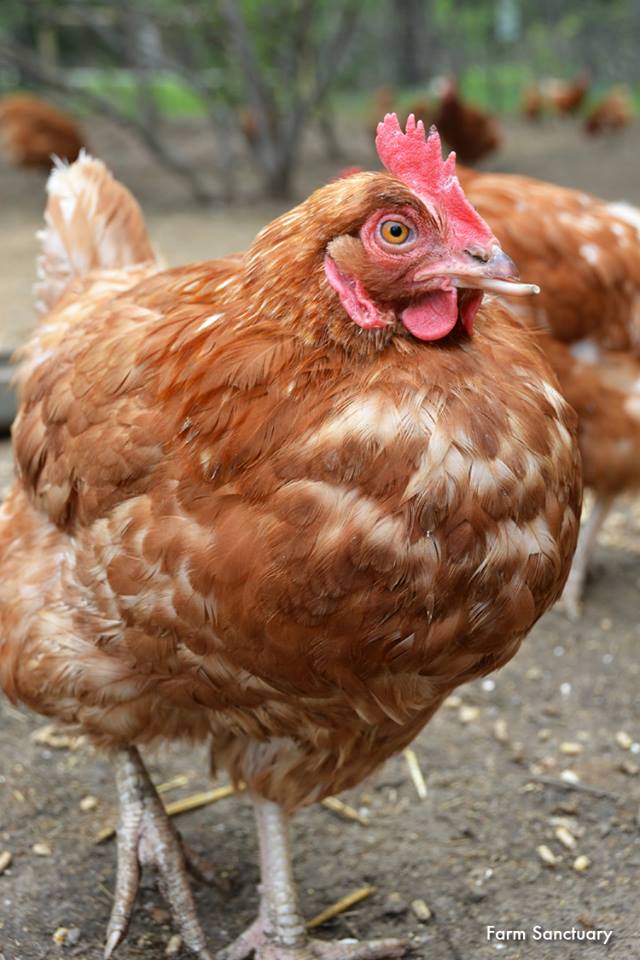 Whoops! This handsome chicken is not a hen, but he was still affected by factory farm egg production. When sorting out chicks to put into battery cages, males are discarded (they are gassed, buried, or ground up alive), since they are regarded as useless to the egg industry. Luce is one of the lucky escapees to live out his life thanks to United Poultry Concerns member Laurie Melichar. 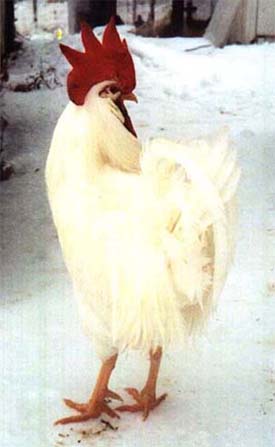