Seven Simple Things You Can Do to Help Captive Elephants – Right Now!

By Christine Kiessling, March for Elephants 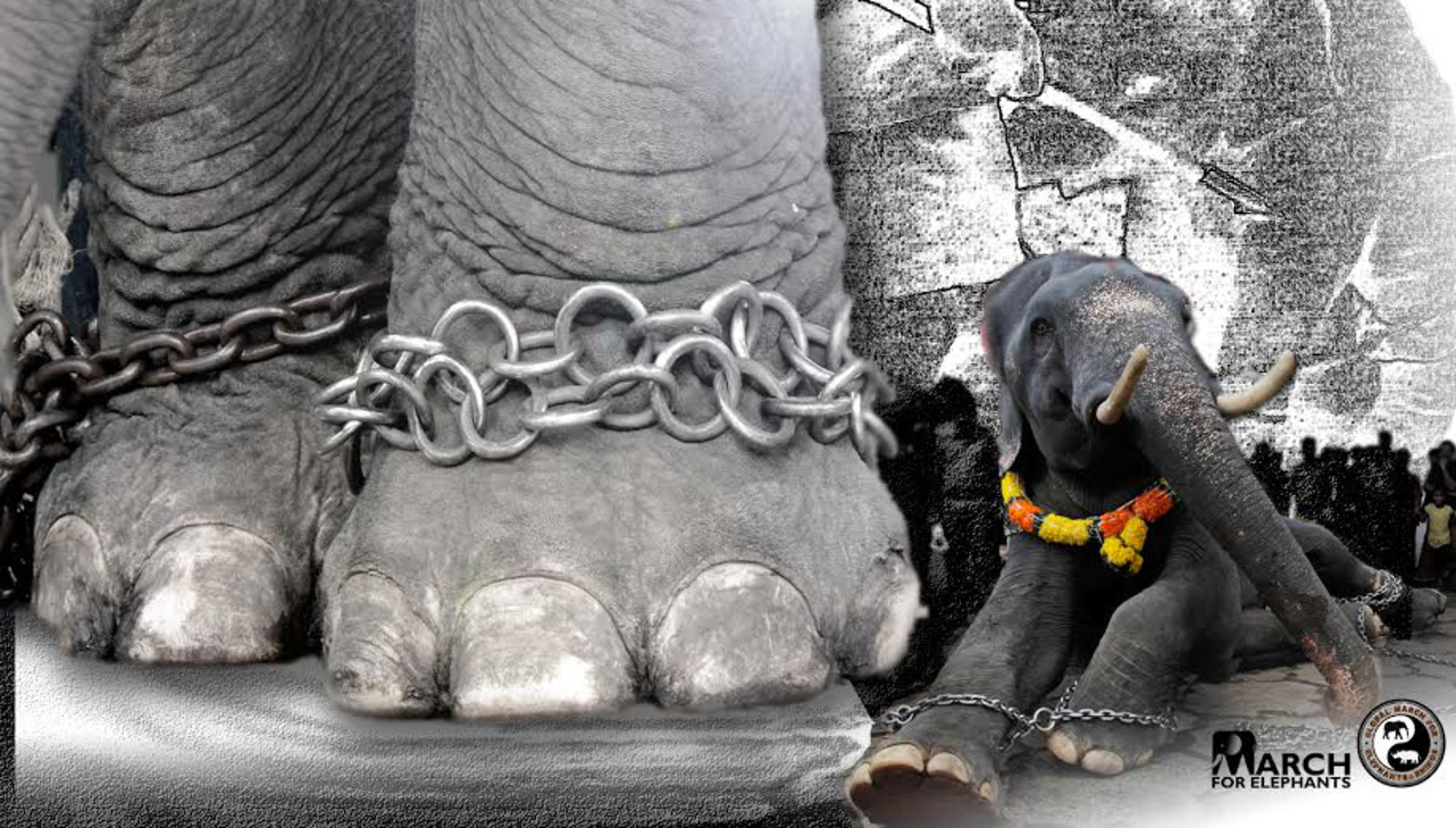 Ancient and iconic, elephants have walked and tended this Earth long before human beings began. A keystone species, their migrations create conditions for life and livelihood for other creatures. Ever tender to their young, elephants are immensely social beings who can go for years without seeing a loved one and then immediately recognize her upon meeting again. They mourn dead members of their herds and help family members and friends survive in times of drought or crisis. And yet, these magnificent beings face multiple crises.

Africa loses 35,000 elephants a year to the ivory trade. Even as populations have crashed, trophy hunting and wild capture to stock zoos continue. In Asia, elephants are beasts of burden, riding stock and amusements for tourists, and objects of veneration. They suffer mightily whichever role they play.

March for Elephants (MFE) and Global March for Elephants and Rhinos (GMFER) and other elephant allied scientists, conservationists, and organizations. MFE, GMFER, and others have been busy on social media and by marching in the streets, advocating for elephants by calling for the end of the ivory trade, trophy hunting, and wild capture and export for life in captivity. We work to educate the public about cruelty in training and captivity circumstances. We know that the exploitation of elephants and their bodies must come to an end before we human beings make an end to elephants.

However, we all have the power to improve the lives of these remarkable and sensitive creatures living their lives in captivity. Here are seven ways you can help them:

Learn how elephants come into captivity — whether they are captured in the wild, or bred in captivity. Spend some time exploring where and how these elephants live. Some of the things you learn may be disturbing, but accurate information is vital so that you can be of the greatest possible help.

“Cute” elephants on social media can be seen painting, swaying to music, frolicking at the beach, or in unexpected places behaving in unexpected ways. Don’t ignore the “elephant in the room!” Chances are very high that this imagery was obtained because elephants were under duress, in a state of great depression, or shown purely for the amusement of tourists to earn the trainer money. Fact check the behavior and the source of the image. This is NOT about the elephant’s “joy.” 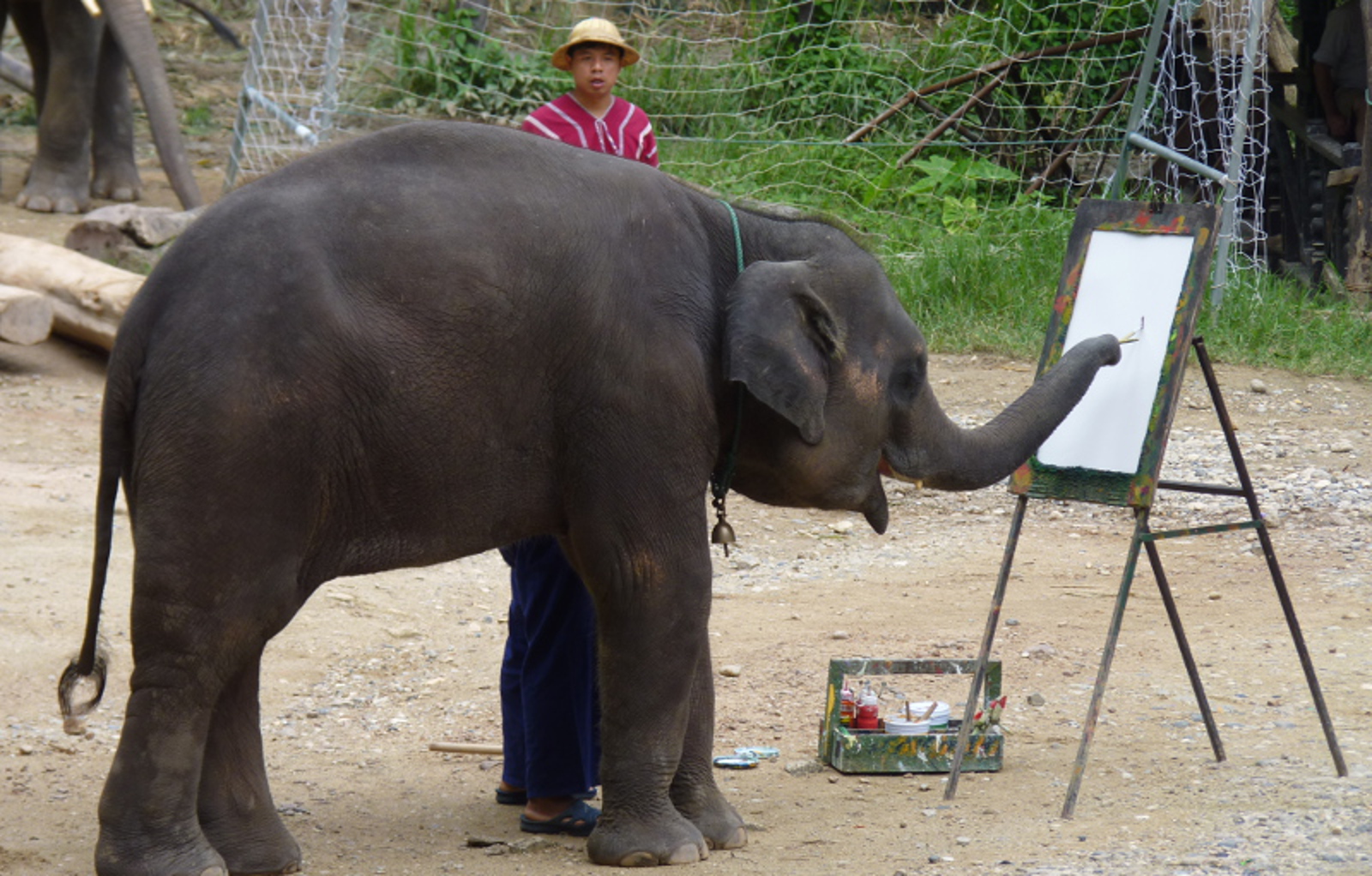 Your knowledge allows you to be the elephant’s voice, alerting others that this is not normal elephant behavior and the posted imagery was made possible because the elephant was forced to behave in unnatural ways. Be polite, and be accurate. This is a teaching opportunity: everyone can learn something important about elephants in captivity. It is likely they had absolutely no idea of the pain inflicted to obtain the “happy elephant” image. The goal is to increase numbers of captive elephant advocates, not shaming people into silence when their only crime is ignorance.

3. Do Not Visit Circuses or Amusement Parks with Elephant Acts

Elephants are incredibly intelligent and emotional creatures. In the wild, they have dynamic lives and play an integral role in forming their ecosystems. In captivity, however, these amazing beings are reduced to show props, tortured to “learn” tricks, and kept in facilities that can hardly replicate their wild habitats. The easiest way to help elephants is simply by making the decision not to support their captivity.

Ringling Brothers Barnum & Bailey Circus has said it will “retire” its elephants from circus shows, due to public outcry against the circus’s treatment of its elephants. However, many wild animal attractions continue to use these amazing beings for entertainment. Six Flags Animal Kingdom, as well as a variety of smaller scale ventures such as Have Trunk Will Travel (which supplies elephants for parades, rides, weddings, and a variety of “special events,” Nosey, the famously unfortunate elephant owned by Hugo Liebel, and of course, zoos, all continue to hold these animals in cages. Speak out by ensuring that you are not supporting ticket sales to these facilities.

4. Work to Ban Bullhook Use in Your Community

Cruelty, whether circumstantial due to lack of ability to engage in natural behaviors, or intentional due to what is asked of these elephants, is too common. Elephant training relies on physical and emotional trauma, “breaking of spirits,” in order for commands to be followed with minimal prompting. You may not notice what trainers carry, but you can be certain that they are there: bullhooks.

The bullhook, also known as “ankus,” with its sharp metal points at the end of a sturdy rod, is designed to inflict pain and instill fear as a means of guaranteeing compliance in elephant training and performance. These points get applied to sensitive portions of an elephant’s anatomy. They are implements of animal cruelty.  There are other, proven, ways available to interact with elephants.

Pat Cuviello and Deniz Bolbol of Humanity Through Education have advocated for elephants and spoken out against the bullhook for over 20 years. The City of Oakland passed a landmark ban on bullhook use in December 2014.

5. Help Improve the Lives of Captive Elephants Near You

If there is a zoo in your community, learn about its elephant residents, their health, treatment, and living conditions. How much room do they have? Is there a heated barn against cold weather? Where did they come from? Is there a breeding program?

There may be a group devoted to the well-being of elephants associated with your zoo. See what activities individuals are organizing to educate the community about captivity and your zoo’s elephants’ well-being in particular. Prior to their Oklahoma City Zoo relocation, Chai and Bamboo found advocates in the Friends of Woodland Park Zoo Elephants. In Edmonton, the Friends of Lucy are very active trying to change local laws and improve the zoo’s conditions for Lucy with the goal of retiring her to a sanctuary.

Draft and sign petitions, support legislation, donate money, volunteer, create groups: All efforts are valuable! Support organizations like the Elephant Sanctuary in Tennessee; and Performing Animal Welfare Society—PAWS, which exist to offer a decent environment with increased range and properly specialized care for elephants “retired” from performance and/or display. Another remarkable organization, Elephant Nature Park near Chiang Mai Thailand releases working elephants and gives them a better, kinder retirement. Contact these sanctuaries and ask what they need to maintain or even expand their population.

You can also lend your voice to the efforts to get the Ringling circus elephants to a sanctuary instead of the Feld’s “Center for Elephant Conservation” crowding 43 elephants on 200 acres. Sign the petition here.

There are also documentary filmmakers who need support in getting the word out about conditions for captive elephants. One of them is Sangita Iyer, who made the award-winning Gods in Shackles. Do what you can to help this film make it to as many screens as possible.

Join a group devoted to elephant welfare, whether wild or in captivity. If there isn’t a group near you, contact Global March for Elephants and Rhinos to learn more.

Once you have a group, spread the word about the herd! Go to local Farmer’s Markets, give short presentations at schools, picket circuses and amusement parks with elephants, write letters to the editor, create projects that connect with other people and groups working to better the lives of elephants currently living in captivity all over the world. And last, but not least, the elephants have many friends on social media. Let’s leverage all of the means we have available to help elephants in captivity live better lives. Trumpet on behalf of those who cannot speak with words!